Previously: Quick summary and set wants; Big and small we have them all!; Better off Ted; A Tettle-ton of Froot Loops; Lucky Tiger Seven; Dizzying Deans, Sportlots has been Barry, Barry good to me; more Michigan? Marvelous!; Tony the Tiger

Well here's a post that's been a long time coming. I'm finally wrapping up the huge Sportlots haul I picked up earlier this year, and I'm excited to be doing it with today's theme: the 1984 World Champion Detroit Tigers!

A few of the guys you'll see today previously appeared in this series' second post that covered all sorts of stickers, minis, and other oddballs, but besides those I scored a bunch of (generally) more standard stuff of some of my favorite members of the Wire-to-Wire Champs: 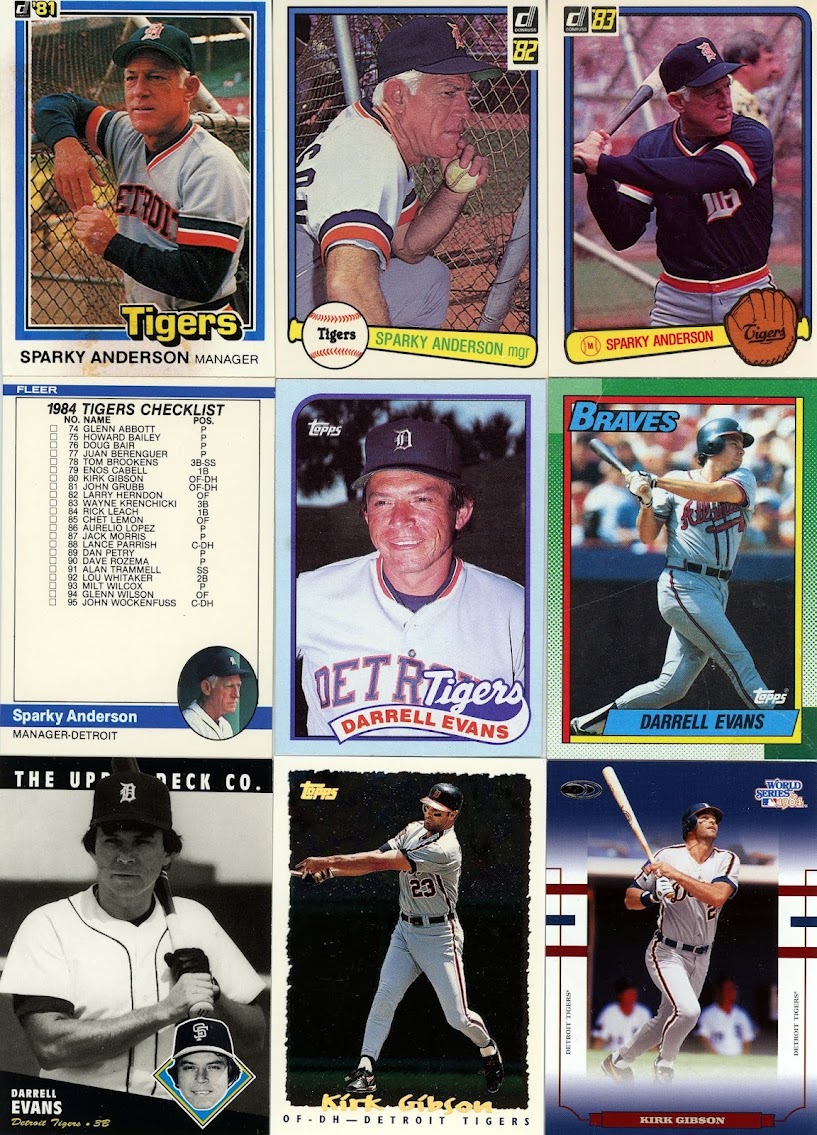 The first scan features three subjects, and we begin alphabetically with Sparky, the first manager to win a World Series in both leagues. He led Detroit to glory in his sixth season with the club after winning four pennants and two rings with the Reds. I added six cards to his collection (more later), and the four you see here are all from the early part of his 17-year Tigers career: 1981, '82, and '83 Donruss, plus an '84 Fleer team checklist. I also bought what should have been a variation of the '83 card, but the seller must have had it mislabeled since it was the same as the other I grabbed. No big deal, though, these are still fun early 80s issues of the guy that managed my favorite team as I watched them growing up.

Next, Evans was an addition to the team as a free agent in late '83 and he'd prove to be an important contributor the following year, though his best Detroit seasons would come the following three years. I added three interesting items to his collection, starting with a pair of Topps box bottom cards from 1989 and '90. I think they were a cool inclusion for collectors back then, and fun pickups now as I chase his checklist. Those are joined by a '94 Upper Deck All-Time Heroes base that combines black & white photos with a bit of a throwback design. It's fun seeing Darrell with his second and third franchises on the front as I know him best as a Tiger, but he spent more years in San Francisco (eight) and of course, Atlanta (nine), than the five he was with Detroit.
Last up in this scan is dramatic World Series home run guy Kirk Gibson; Decline to walk him at your peril if you're a racist MAGAt reliever. Since Gibby was a guy I started supercollecting before I knew what that was I'm quite surprised I didn't have his '95 Topps Cyberstats parallel, but that was easily rectified here. And speaking of his legendary Fall Classic performances, I came up with his Tigers entry in Donruss' 2004 World Series Blue insert to go along with the Dodgers one. You'll see the third item I picked up of him below. 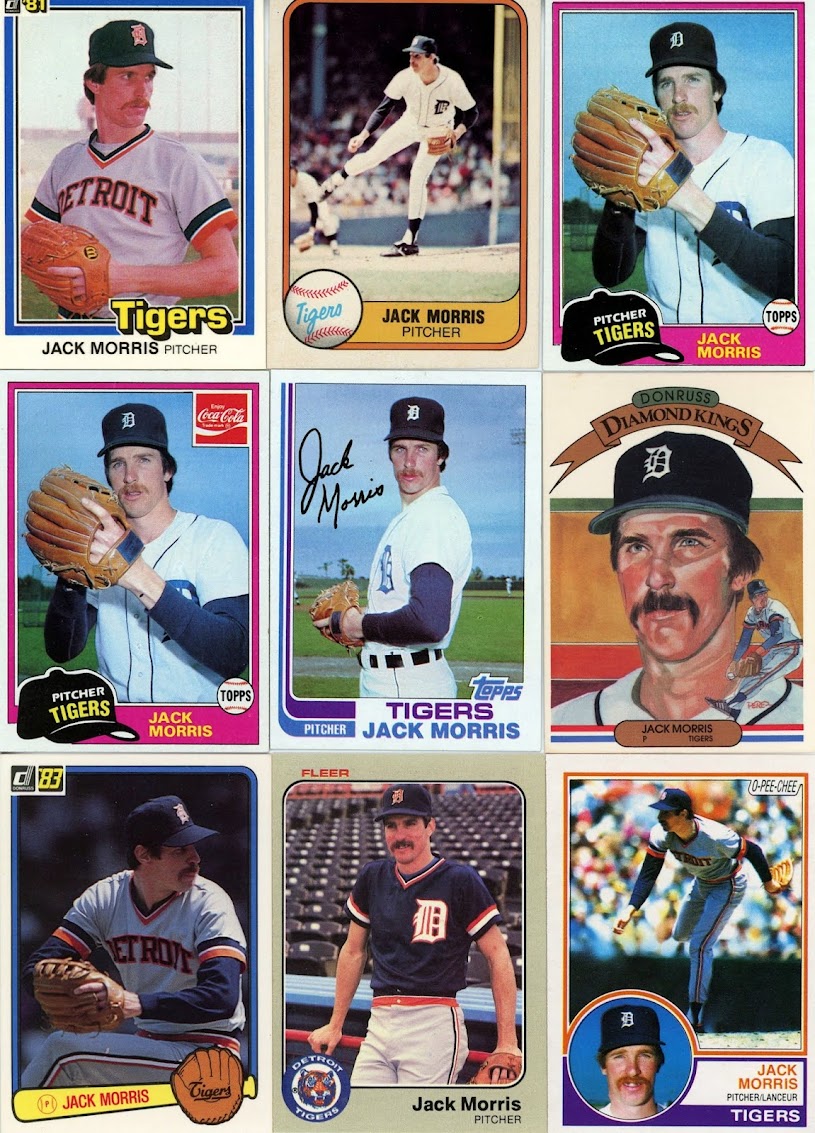 Next is a guy who dominates the next two scans just like he dominated during the regular and post-season in '84. HOF P Jack Morris threw two complete games against the Padres in the Series to win his first of three rings after earning 19 dubs (including a no-hitter) earlier in the year. This scan and the next two include a total of 19 new items for his collection, one of the larger of my Tigers PCs. All but four feature him with Detroit because I didn't feel like paying $0.18+ for non-Tigers cards, though I'm still happy to acquire them otherwise.
This scan covers the 1981-93 stuff, which means it includes stats from his second, third, and fourth full seasons as a starter (he appeared in 28 games in '79 but only started seven of those). The '81s include the debuts of Donruss and Fleer, Topps (because I somehow didn't have that), and Topps' Coke Team Sets. The Coke card is my second from the Tigers set to go along with Kirk Gibson. As with the '81 version, I somehow didn't own Morris' '82 Topps base before this, but now I do! The '83s are a pair of Donruss cards, including a Diamond King(!), plus Fleer and OPC. The back of the DK refers to "The 27 year old" as "the ace of the Detroit pitching staff for the last four seasons", and considering he averaged 16 wins person year in that span, I think that's fair. 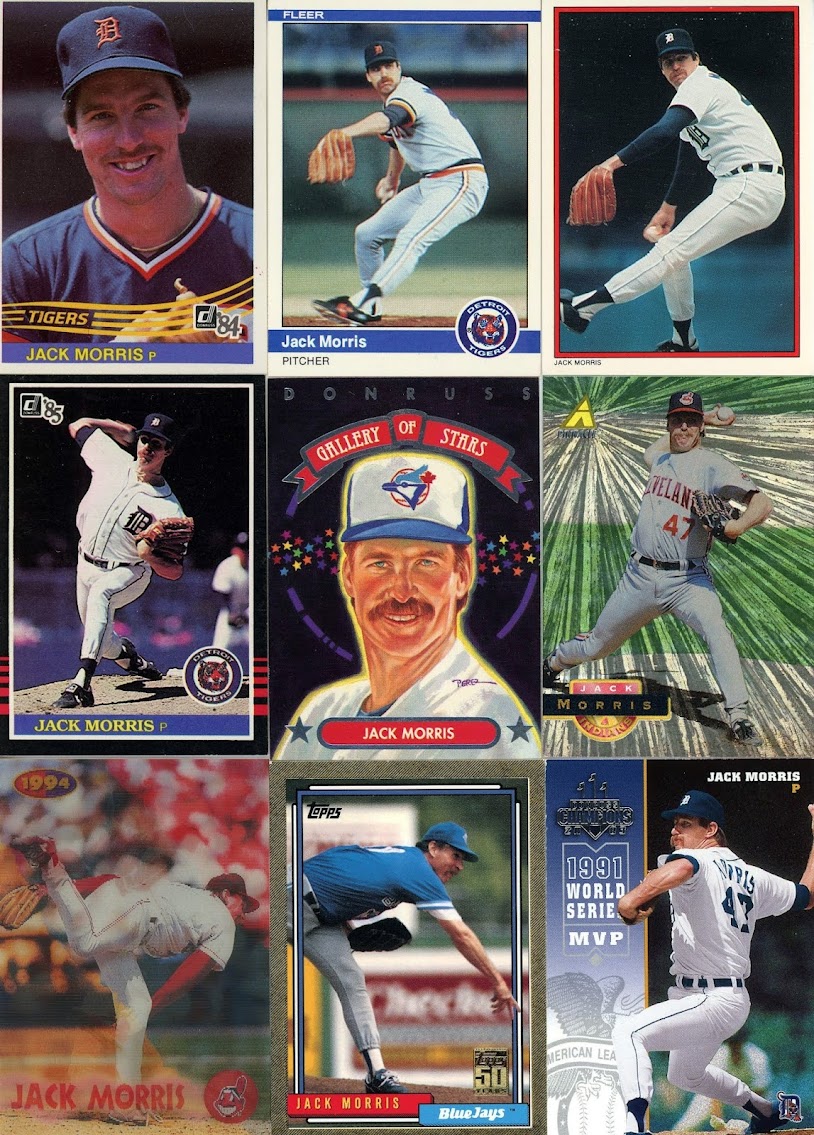 In this scan we get through the rest of the 80s stuff before jumping to stuff that's a bit more modern. Jack's 1984 cards include his stats from the previous season, during which he won 20 games for the first of three seasons ('89 and '92). The top three cards in this group were printed the year Detroit last won it all, and they include Donruss, Fleer, and Topps' Glossy Send-In All-Stars. The '85 Donruss card appears to be the last mainstream one I needed of the ones made the year after the Roar of '84, leaving me chasing some boxed sets and oddball-type stuff.
The next four are the only non-Tigers cards I grabbed because they were too cool to avoid. First is '92 Triple Play's Gallery of Stars, another Perez-Steele collaboration that makes them all but Diamond Kings. Two '94s capture his sunset season with the Indians: a Pinnacle Museum Collection and Sportflics Rookie/Traded base. That's one of my all-time favorite parallels plus a brand I love combined with the rookie/traded theme, so they were obvious takes. And last up in the group is a 2001 Topps Traded Gold parallel of Morris' base card in a subset that reprinted earlier Topps Traded issues. It's #d /2001, continuing that year's flagship product's debut of the Gold parallel as we currently know it.
And then we're back to a Detroit card, at least in terms of the uniform and team listed, if not the subject. As I mentioned, Morris came up aces in the '84 Series, but his gutsy 10-inning complete game in 1991's Game 7 combined with his victory in game 1 over Atlanta earned him the Series MVP. At that point he was 4-0 in five Series starts, though he'd go 0-2 in a rematch with the Braves the following year as a member of the champion Blue Jays. Regardless, that legendary '91 performance earned him the final card in this scan from Donruss' 2003 Champions set. 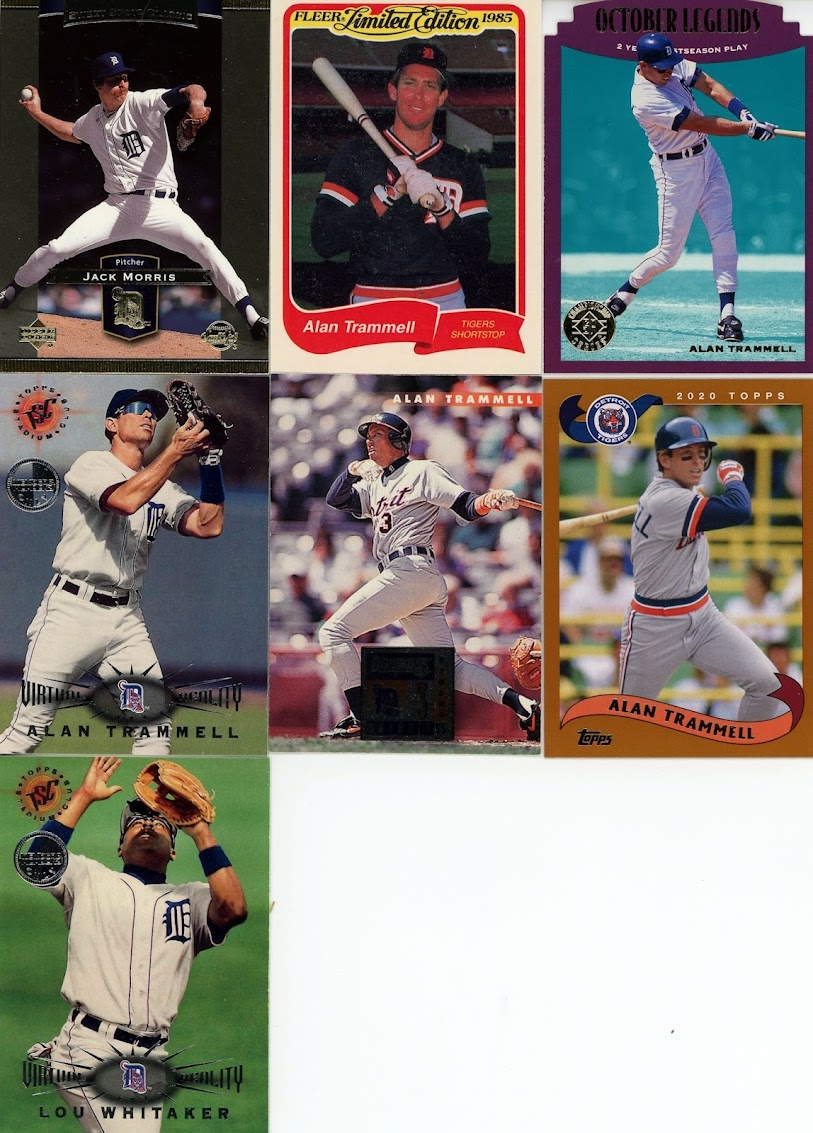 Scan #1 included three of the most important '84 Tigers, and so does this one! Morris finishes off his post-dominating run with a base from one of my favorite Upper Deck product lines: Sweet Spot (Classic, from 2003, in this case).
I also managed to grab a few cards of Detroit's iconic double-play pairing, Tram and Sweet Lou. The HOF SS's cards here are from '95 SP Championship's Die-Cut parallel (giving me all four of his appearances in the product), '95 Stadium Club Virtual Reality Members Only, '96 Donruss, and 2020 Topps Archives. Once again I'm in disbelief that I lacked such a basic card as Tram's '96 Donruss, but that was easily rectified. We'll see Tram again shortly, but for now I'll mention once again that I like 2020 Archives' callback to the 2002 flagship design.
Sweet Lou one of two today is from one of the same sets a Trammell from above came from. 1995 Stadium Club continued its Members Only parallel, and that year it introduced Virtual Reality, the product's answer to flagship's Cyberstats insert that attempted to extrapolate full stats for the shortened season. Topps mashed the two together into Virtual Reality Members Only, a third insert, and the result is what you see above. 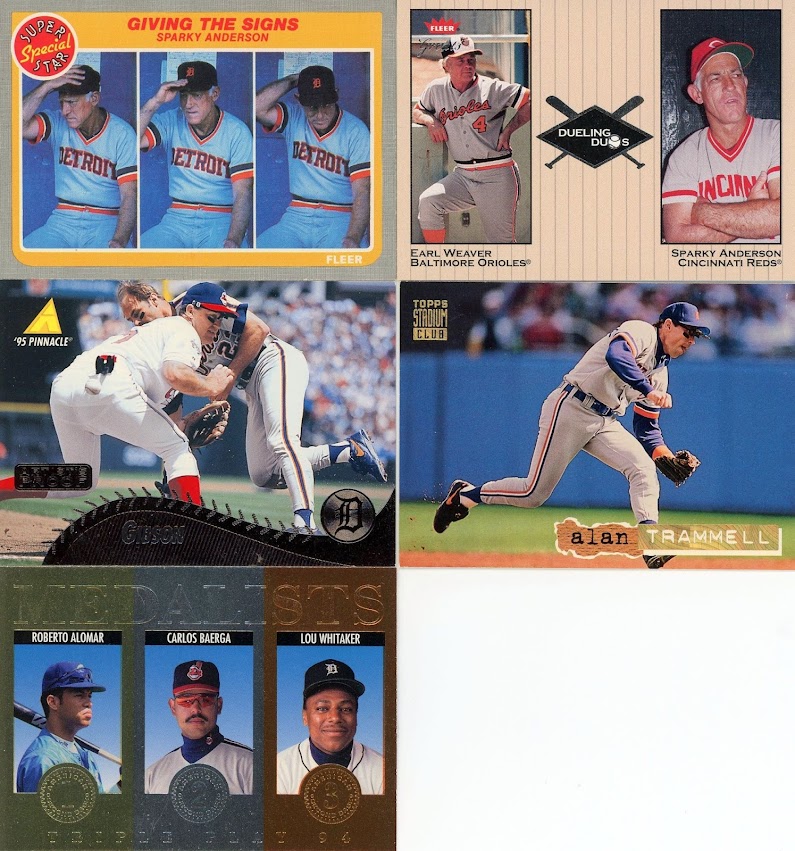 I think I have to name this scan my favorite of the bunch by default since it includes four of the guys previously discussed today, including a pair of slick '90s inserts (which, of course rule, so that tag is once again in effect today!).
Sparky gets a multi-photo '85 Fleer Superstar Special subset demonstrating "giving the signs", and then a super cool 2002 Fleer Greats Dueling Duos insert with another managing legend, Earl Weaver. The back explains that the two faced off in the 1970 World Series, with the third-year Weaver's Orioles defeating Sparky's Reds in his managing debut. These guys combined for 43 seasons as managers, earning 3674 wins, nine pennants, and four titles (one for Weaver). I like the classic look of that insert, not to mention the pairing.
And then there's the other three players I said you'd see again. Gibby returns thanks to the pinnacle of the Pinnacle brand--its 1995 product and the highly sought after Artist's Proof parallel. The foil has faded from gold to something more like silver over the years, but it's still awesome. Tram's other appearance is another Stadium Club parallel: 1994's Golden Rainbow, with the lone difference being the gold/rainbow foil in the Label Maker-like player name section. And Sweet Lou's appearance in the super cool 1994 Triple Play Medalists insert is a textbook example of knowing what to look for before searching Sportlots, because that very card won't appear under a "Lou Whitaker" search (instead the description reads "Alomar|Baerga|Whitaker"). The card itself is another fun 90s insert, highlighting the best in each league by position, even if it's now off-putting to see the recently disgraced Alomar on it.

Well, just like the 1984 season, this was definitely a wild ride that ended in success! Another huge Sportlots foray is in the books, and now I can get to other stacks of cards on my desk from a blogger trade, eBay, and a TCDB deal, plus who knows what else to come?
Posted by Dennis at 7:00 PM