7/2/21 card show report: dollars, dimes, and quarters, I need them all right now

Nickels? In this economy?! Ain't no nickel boxes around here, but there was plenty to look through when it came to boxes full of dollar, quarter, and dime cards at this month's show in Taylor a few weeks ago. Unlike the past two shows, this time I didn't come home with a box stuffed with absurdly cheap hits and a light wallet, and instead I dropped just $23: $10 worth of dollar items and the rest out of the dime and quarter sections.
It was still reasonably productive, though, not to mention a great way to spend part of my afternoon on the Friday before Independence Day. I achieved my monthly goal of tracking down some trade bait for others, including scoring [pun intended, wait for it] all but one of the non-RCs my Canadian buddy Doug needs for his 2021 Score football set. Everything this time is already earmarked for trade packages (a few of which have already gone out), so I have nothing to show off from that category, but I did bring home two scans' worth of personal pickups: 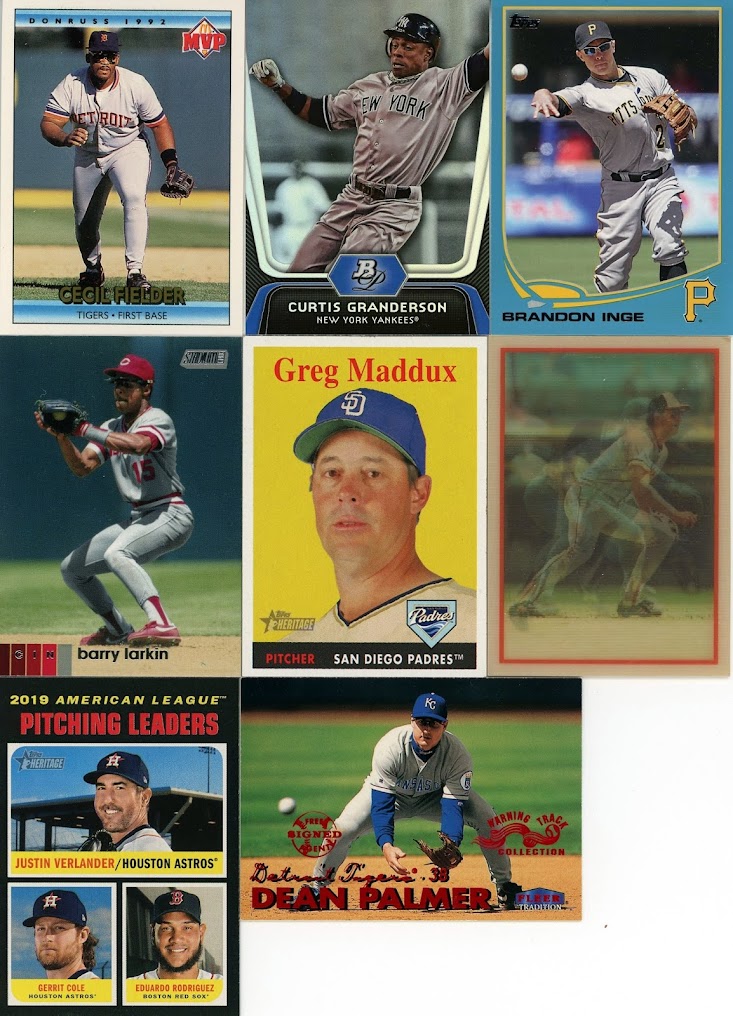 The baseball group is Tiger-heavy, even if the uniforms pictured don't reflect that. Big Daddy is the lone player in his Detroit duds, representing the team in Donruss' 1992 McDonald's MVP set. Former blog namesake Granderson comes to us from 2012 Bowman Platinum, though as a member of the Yankees. Inge spent part of 2012 with Oakland, then played a 50-game sunset season with the Pirates, as captured on that 2013 Topps Update Blue parallel.
Down the middle we have the three non-Tigers, all of which are from some of my top PCs. I love the photography and design as usual from a Stadium Club release, in this case Larkin's 2020 version. There's no way I'll skip over a new Maddux card, especially if it's in the dime box like that '07 Heritage, even if it's still weird to see him with a team other than the Braves and Cubs. And card #3 here is a double-dip of favorites: Cal Ripken Jr. and Sportflics. The 1987 single you see above is from the "Best in Baseball" subset that goes by league and position, and this one includes Cal along with the late Tony Fernandez of Toronto plus Texas' Scott Fletcher as the top AL SS of 1986.
Getting back to Detroit-related cards, first is a 2020 Heritage League Leaders subset starring current blog namesake Justin Verlander, who went 1-2 with teammate Gerrit Cole in wins by AL pitchers (21 and 20). Joining him is a pre-Tigers uniform card of 3B Dean Palmer, a 1999 Fleer Tradition Warning Track parallel. That means the base card's foil (including the note that Detroit signed him) along with the insert's logo are red instead of gold. 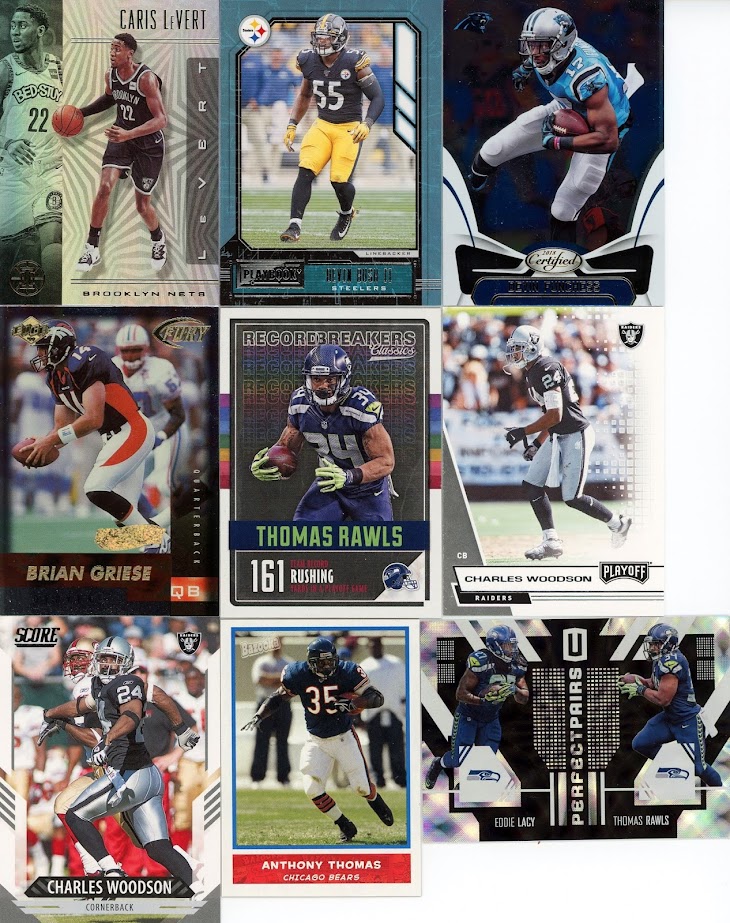 And the Michigan stuff all fit nicely into one scan as well. I added to my small but growing Caris LeVert collection with a shiny 2019-20 Panini Illusions base--an easy snag from the dime box. He's joined in the top row by a pair of Michigan Football Devins from the past decade (we had a few!): LB (and birthday boy!) Bush from 2020 Panini Playbook (my first from that set) and WR Funchess out of 2018 Panini Certified. Side note: Funch recently caught a record-setting "pass" of a football dropped 750 feet from a helicopter, so he's got that going for him.
Three of the next four guys played for the '97-'98 national champs so I'll cover them all at once. Griese's card is a '99 Collector's Edge Fury Gold Ingot parallel, which you'd be able to tell better if the shiny "Gold Ingot" logo near the bottom-right of the photo didn't look like golden static. Heisman winner Woodson makes two appearances by way of 2020 Panini Playoff and 2021 Score, and I love that the latter included a vet like him. And lastly, the A-Train's back in diminutive form thanks to a 2004 Bazooka Mini--a little card that bolsters a big collection of mine.
And to finish things off we segue nicely to our last player of the day, another RB: transfer RB Thomas Rawls. In keeping with my collecting rules, I'll collect any cards of players who transferred in and out of Ann Arbor as long as they aren't depicted with a college team other than Michigan. That wasn't even an issue here with two pro uni inserts: 2017 Panini Classics Record Breakers and 2017 Panini Unparalleled Perfect Pairs. The former discusses a team record Rawls set for rushing yards in a playoff game: 161 in their 2016-2017 wild card tilt against the hapless Lions. Meanwhile, the latter pair is less than "perfect" since both players would be gone from the team after 2017, with Lacy out of the league and Rawls playing just one more season himself. It's a cool looking shiny card, though!
So, yeah, not much to show off or brag about, but I had fun digging through boxes, and the money I saved can always be available the next time my favorite seller has a blowout sale.
More posts to come soon as I continue to try to catch up on cards in-hand and chilling on my desk, plus stuff that's still due to arrive!
Posted by Dennis at 8:37 PM