Previously: Quick summary and set wants; Big and small we have them all!; Better off Ted; A Tettle-ton of Froot Loops; Lucky Tiger Seven; Dizzying Deans, Sportlots has been Barry, Barry good to me

Just two posts left after this one! Tonight's will be another group post instead of a single player like the last one, though we're sticking with Michigan Baseball as the theme. I believe I counted 17 different players in the scans below, enough that I originally considered splitting them up, but I'm feeling motivated to finish these up. Therefore, it's more Michigan mania! 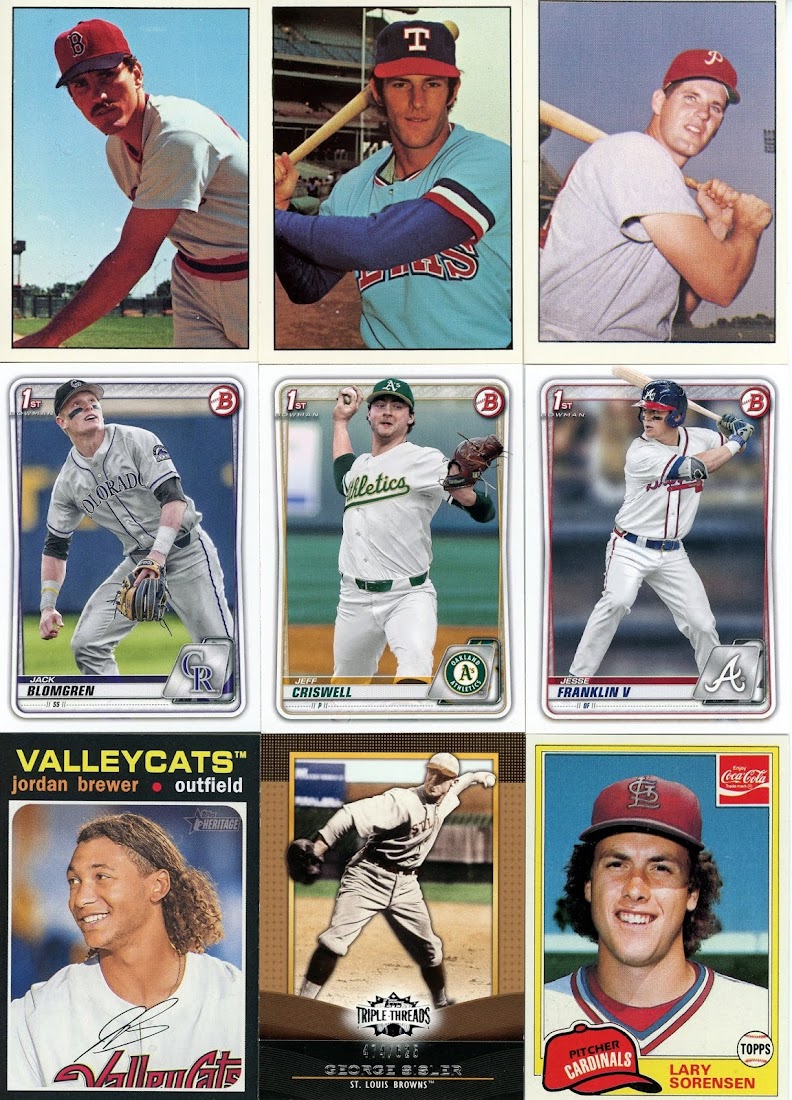 We'll start with this group since I found a lone new card for all nine players. Up top are three of the older Wolverines you'll see today: 1976 SSPCs of P Jim Burton and OF Tom Grieve, plus a '78 TCMA of 1B/OF (and UM football player as well) John Herrnstein. Burton's '78 SSPC card will sew up his four-card run whenever I can find it. Herrnstein's collection will be tougher to complete because, as a reminder, he shares '60s rookie star cards with Willie Stargell and Dick Allen.

The next four are some of the latest Michigan alumni to make their pro debuts. Blomgren, Criswell, and Franklin (2020 Bowman Draft) were all selected in the first five rounds of the '20 draft, while Brewer (2020 Topps Heritage Minors) was a Houston 3rd rounder the year before. They're all pretty good prospects, and these items represent my first for each player except Criswell (my 4th).

A couple "S" players close out the scan. First is a 2011 Triple Threads Sepia parallel (#d /625) of HOFer George Sisler, giving me 99 different items of "Gorgeous" George. The other continues the run of oddballs, especially of the food issue variety (foodballs?) in this series: an '81 Topps Coca-Cola St. Louis Cardinals issue of P Lary Sorensen. Aside from the obvious Coke logo up front and different numbering on the back, these are very similar to the base cards, but still fun pickups for your everyday player or oddball collector. 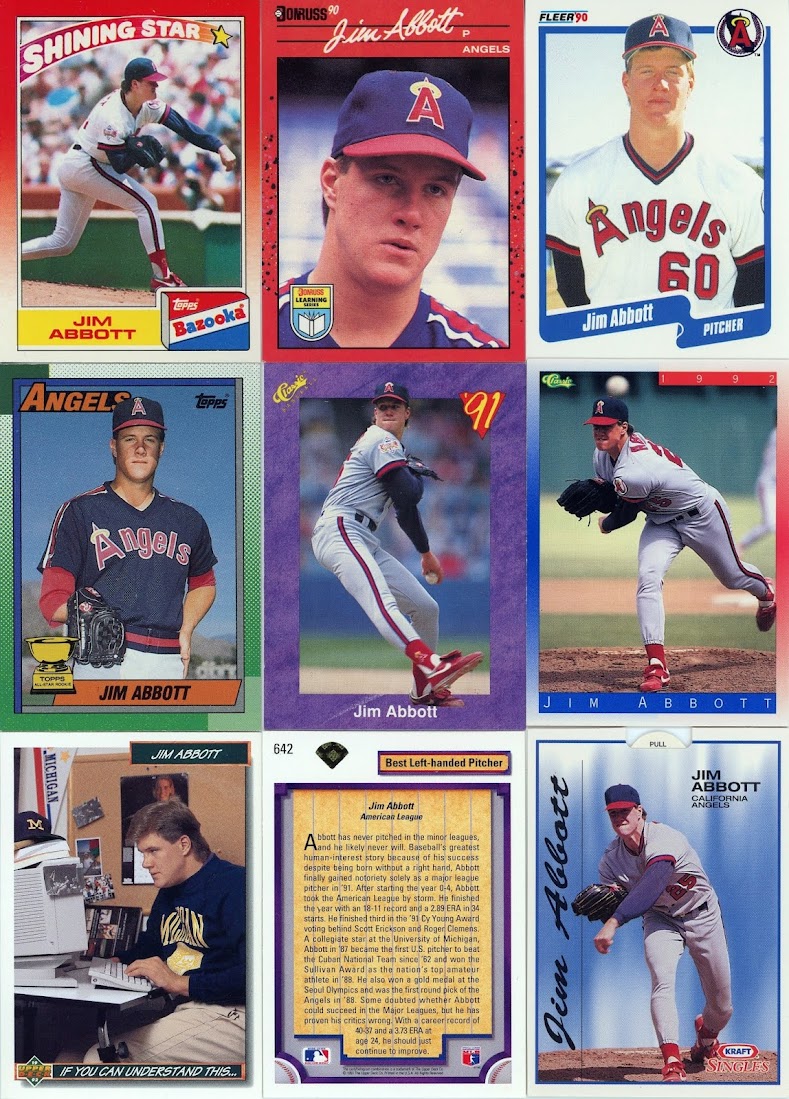 Jim Abbott got the biggest boost in numbers to his collection of the players you'll see today, and this group of nine isn't even all of them. The scan is bookended by food issues from Topps/Bazooka's 1990 partnership plus 1993 Kraft, a pop-up I won't be popping up myself. Also from 1990, starring a poorly chosen photo emblematic of the junk wax era, is Donruss' Learning Series, a 55-card set geared towards elementary- and middle-schoolers.
Then things get Canuckified with 1990 Fleer Canadian and O-Pee-Chee, a couple issues from our friendly neighbors to the north. That Fleer photo was another bad choice, to be sure. A pair of Classic cards produced in 1991 and '92 look much better to me since action shots almost always trump portraits in my opinion, plus it's always really cool to see portions of Jim's one-armed delivery. Last up here is a pair of '93 Upper Deck Gold Hologram cards, which are annoying to have to track down as a player-collector, but then I suppose they do give me a reason to collect a second version of a card where Abbott's wearing a Michigan shirt! You'll see one more of these below since he was all over that '93 set. 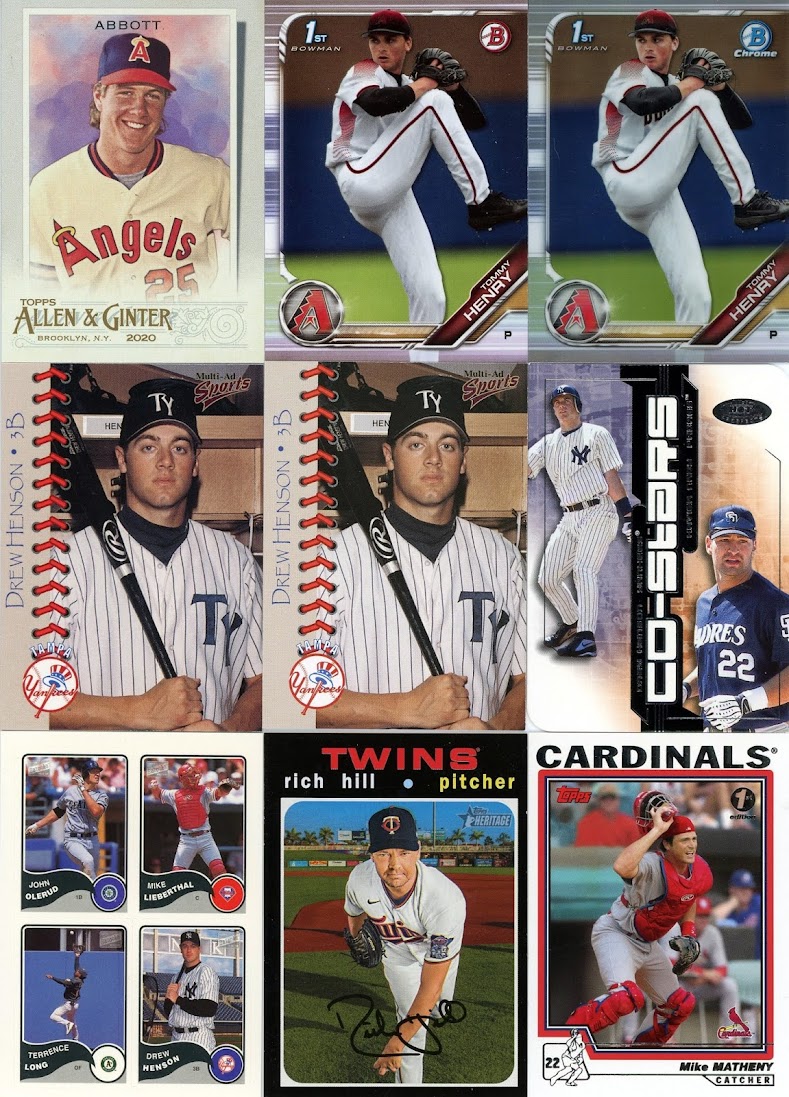 One last Abbott (for now) gives way to a few slightly more recent guys. I found a new pair of cards of Portage, Michigan native and 2019 Arizona draftee Tommy Henry: his Bowman Draft and Draft Chrome Refractor issues. It's always nice when I can track down stuff with backs that mention Michigan in one form or another, such as these that include his college stats.
Drew Henson is a player whose cards I get to chase in two sports, and here I have four of the five from this purchase. The first couple are from 1999 team sets for New York's Tampa affiliate, with the second apparently hailing from an "update" set that's almost identical. The '02 Hot Prospects insert he shares with another guy that had some hype behind him, Xavier Nady, is pretty cool thanks to a pair of rounded corners. And to those I added a four-player 2003 Bazooka sticker whose players happen to appear in the order of best MLB career to worst!
You'll see more of both of the other guys in this scan in a minute, but interestingly enough they're both still involved with the game despite their ages. Old Rich Hill turned 41 a few months ago but is still pitching pretty well, though of course those efforts are now for the Rays instead of the Twins, with whom he appears on his 2020 Topps Heritage base. And former Cardinals C and manager Mike Matheny made the relatively short trip to Kansas City to helm the Royals after being let go by St. Louis, the team pictured on his 2004 Topps 1st Edition parallel above. 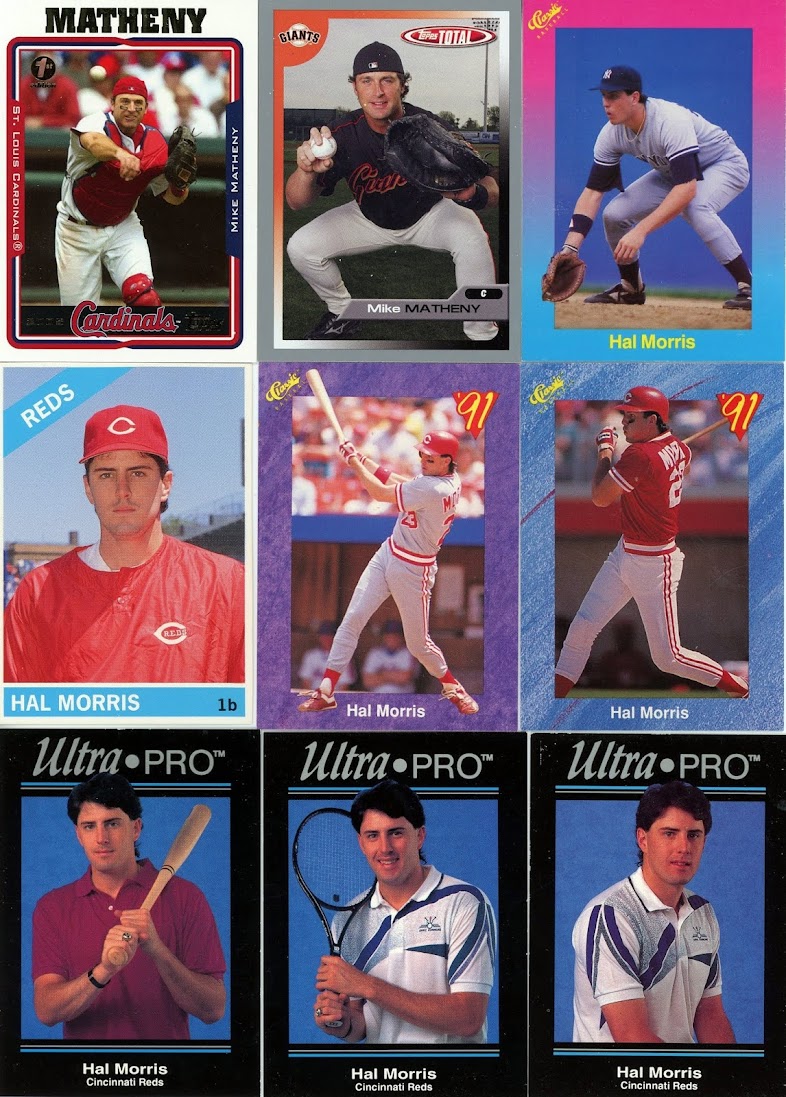 The other Matheny cards I found were both from 2005. The first is also a 1st Edition version of his Topps flagship base, and it offers and even better action photo than the previous year's. I wonder if an out resulted from that throw? The other is the Silver parallel from Total, which wasn't as good as the 2002-03 versions in my opinion, so I'm not really disappointed the brand disappeared until the bastardized cash grab online version resurrected the name in 2019.
The rest of this scan stars William Harold Morris, and almost everything I scored of Hal this time was of the oddball variety, but that worked for me as a fun way to beef up his PC a bit. Here you see a trio of Classic cards from 1989 and '91, a 1991 Baseball Cards Magazine issue done up in the style of '66 Topps, and Morris' three appearances in a Rembrandt/Ultra-Pro promo set put out in '92. The latter was a 20-card set featuring casual shots of some baseball stars (such as Bobby Bonilla and Jose Canseco), mainly focusing on their favorite pastimes, such as tennis for the guy above. The backs included Ultra Pro holograms and a message of the "limited" nature of the cards; the ones you see here received 125,000, 250,000, and 100,000 copies, respectively. 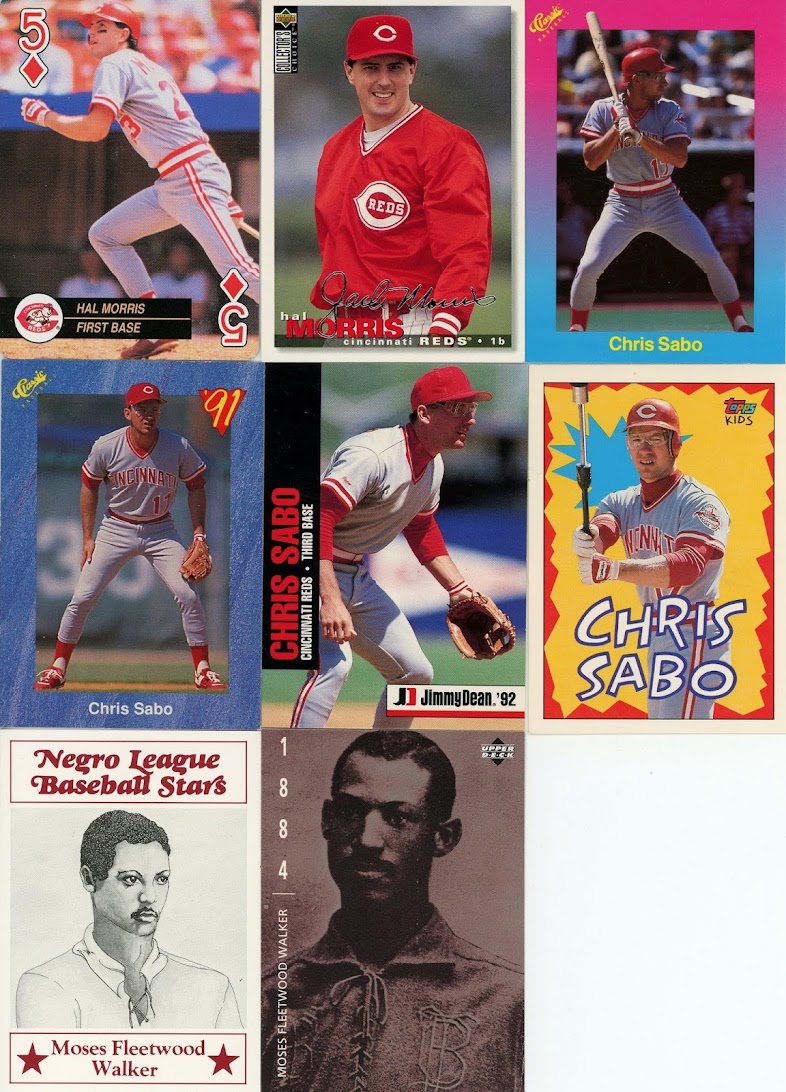 Two more Morris cards get me just a pair shy of 300 for his collection. The first is from the US Playing Card Company's 1992 Baseball Aces deck, and it's only natural that someone playing for the Reds should be assigned a suit of that color. The other is the only "mainstream" card in his bunch, his '95 Collector's Choice Silver Signature parallel, making him the fourth Wolverine I've found from that set (Steve Ontiveros, Steve Howe, and Scott Kamieniecki are the others).
Player #2 in this scan is Hal's former teammate Chris Sabo, and as with Morris I came away with '89 and '91 Classic issues of "Spuds". You can add him to the food issue club as well thanks to a '92 Jimmy Dean oddball from an 18-card set that also included Jim Abbott among its stars. Lastly, also from 1992 is a goofy design (and funny photo of Sabo utilizing a hitting training aid) from Topps Kids. If you care for whatever reason, the latter is the variation that has two asterisks in the trademark line instead of one.
It seems like a good idea to mention that this post will be published on Juneteenth as we look at the last player in the group of vertical cards. Moses Fleetwood "Fleet" Walker was a C for Toledo of the old American Association, considered a "major league", back in 1884, making him the first black player (or just "the first black in the majors" according to the cringe-y back of the 1986 Fritsch Negro League Baseball Stars card you see on the left) to break the color barrier. That makes Jackie Robinson's bravery in 1947 no less important, though, as he fought through the same kind of ignorance and hate that Walker did. While you won't find him on too many cards, unfortunately, another of his items can be found relatively easily: a base card from Upper Deck's 1994 product Baseball: the American Epic, which describes Fleet's history a bit more intelligently. 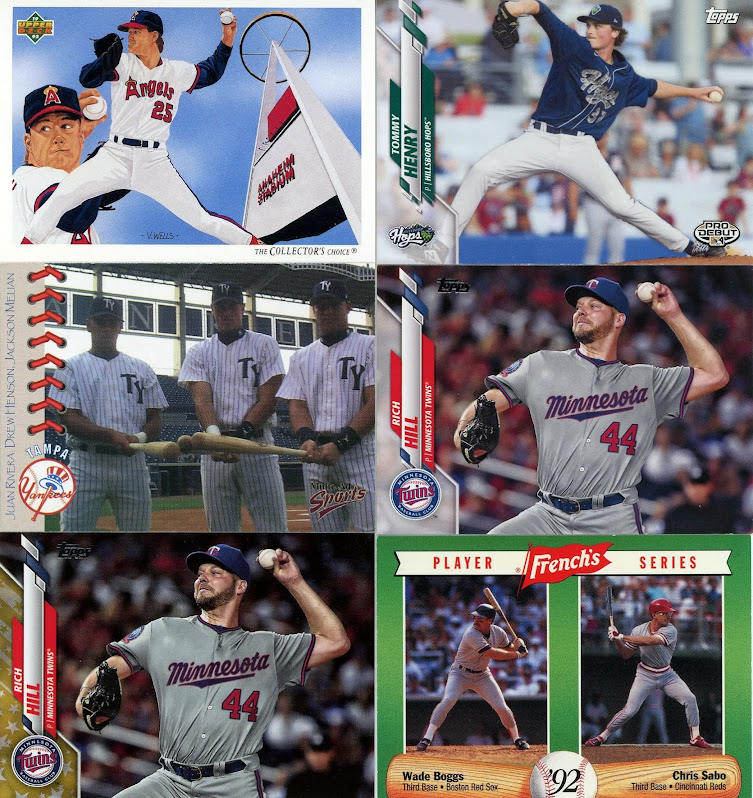 To finish things up today, here's a six-pack for your weekend. First up is the final Jim Abbott Gold Hologram from 1992 Upper Deck, a set that included lots of those artsy cards. My Tommy Henry collection grows by one more thanks to a cool 2020 Topps Pro Debut base that makes good use of the card's orientation. A multiplayer card including fellow Yankees prospects from the time Juan Rivera and Jackson Melian is Drew Henson's other appearance from the Minors team sets mentioned above. I got two cards closer to Rich Hill's 2020 Topps rainbow with his base card and Gold Star (factory set) parallel, not to mention two more cards from his year with the Twins. And lastly, Sabo joins Morris in needing just two more cards for a milestone (he's at 198) thanks to one last food issue: a 1992 French's card he shares with HOFer Wade Boggs. I've never been a mustard guy but that 19-card set full of All-Stars is fun and I may have to try to track down more of those.
Considering these additions combined with those from some of the earlier posts in this series, I got a lot of good work done on the checklists of some of the many former Wolverines I collect, and added some fun pieces.
Still to come in the final two posts are one more single-player feature plus a last one with a team theme that I think will please many of you!
Posted by Dennis at 4:20 PM