2021 Sportlots purchases part 7: Sportlots has been Barry, Barry good to me

Previously: Quick summary and set wants; Big and small we have them all!; Better off Ted; A Tettle-ton of Froot Loops; Lucky Tiger Seven; Dizzying Deans

Time to get back to the Sportlots piles! I'm actually almost done as I'm planning on something like three more posts after this one: two groups and one single player. This evening's post will be of the latter type, focusing on the #3 player in my collections, Barry Larkin.

Because I generally stuck to the minimum $0.18 price point and due to the fact that I already had a lot of Larkins (more on the total at the end of this post), nothing you'll see today is that big of a deal. That said, there's lots of 90s stuff, which is often my favorite, and I like to track down pretty much anything I need of the former Michigan/Reds HOF SS.

So here's a look at some Barry nice cards: 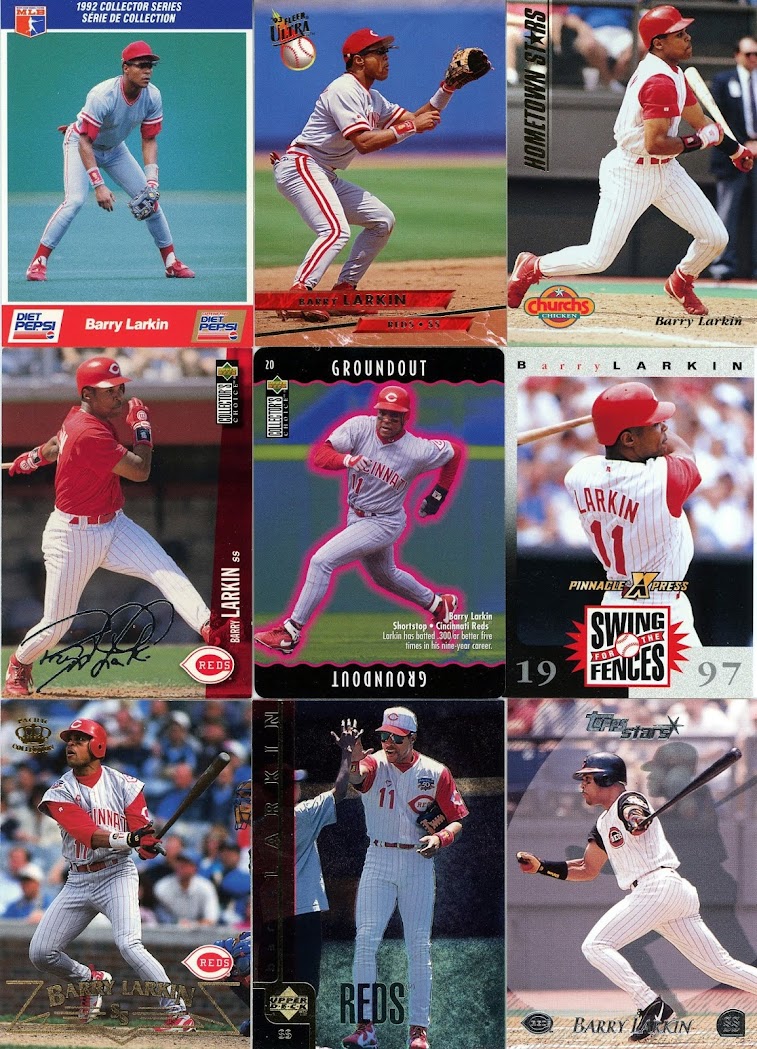 When you already have lots of a guy's lower-end mainstream base stuff, what better direction to go in than oddballs? I've always been a Coke guy but I like the 1992 Diet Pepsi card that kicks off this post. Similarly, I don't think I've ever had Church's Chicken, but the collaboration they did with Panini back in 1994 resulted in a pretty cool item.
I was able to fill some base card holes in his PC, though, such as '93 Ultra (how did I not have that?), '98 Pacific and Upper Deck Special F/X, and 2000 Topps Stars. The Special F/X card looks great but just doesn't scan well due to being especially foil-y. The effect looks very nice on what was already a solid base design in my opinion. Also, the back of the Stars card rates Barry on a scale of 1-5 stars in hitting (4), power (3), speed (4), defense (5), and arm (3). I've got no complaints with any of those, but then again this was back when Topps apparently employed people that cared about making great cards.
As for inserts in this scan, well, they're right down the middle, like a meatball clobbered by Barry for one of his 198 career dingers. I consider 1996 Collector's Choice an improvement over the previous two years of the product, and from that one I came up with one of his Silver Signature parallels plus one of his two You Make the Play card game insert appearances (the other is a stolen base card, apt since he swiped a career-high 51 in '95 and then became the first SS to join the 30-30 club the following year). Then we have a Swing For the Fences insert from 1997 Pinnacle X-Press. His 33 jacks in 1996 were tops for his career, justifying his presence here, though for most of his MLB tenure he was more like a 10-15 homer guy. 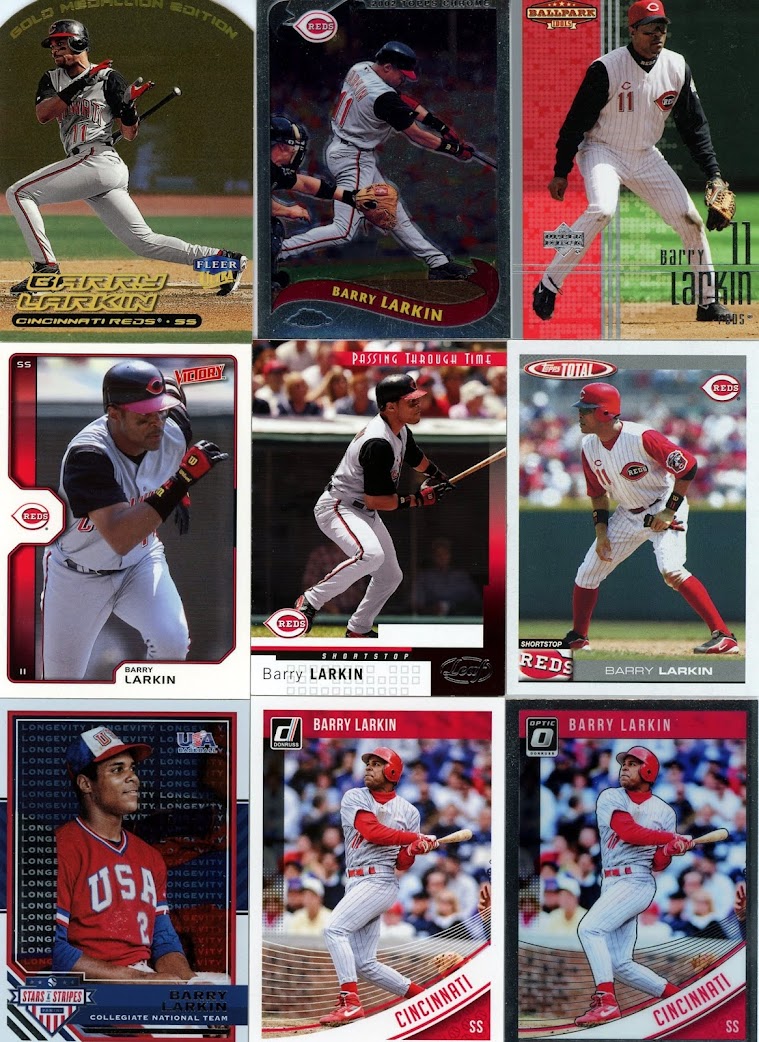 This next group spans 2000-2018, which is cool because over the whole post I found cards that were made between 1992 and 2020. First up is another instance of Ultra's die-cut Gold Medallion parallel from 2000, one of two years they did that for their baseball product. 2002's cards include a slick looking Topps Chrome design plus UD's Ballpark Idols and Victory, with the latter definitely having a bit more staying power. Before a jump of more than a decade, take a look at cards from 2004's Leaf and Topps Total. The former is from the Passing Through Time subset, which includes the same front photo as his earlier card in the base set, but a back that's a reprint of his '93 Leaf base--kind of a nice feature.
The bottom row has three cards that were made much more recently by Panini. First is a USA Baseball Stars & Stripes Longevity insert--as opposed to the Longevity base cards also available in the product. WHY, PANINI, WHY?!--produced in 2017. Barry, of course, played for Team USA at the '84 Olympics with baseball as a demonstration sport, and he helped his team to the equivalent of a silver medal after the team lost to Japan in the final. I now own six cards of him suiting up for his country. The others here are from 2018 Donruss and its chromed-out Optic version, both of which come with a nice photo of him following through on a swing. 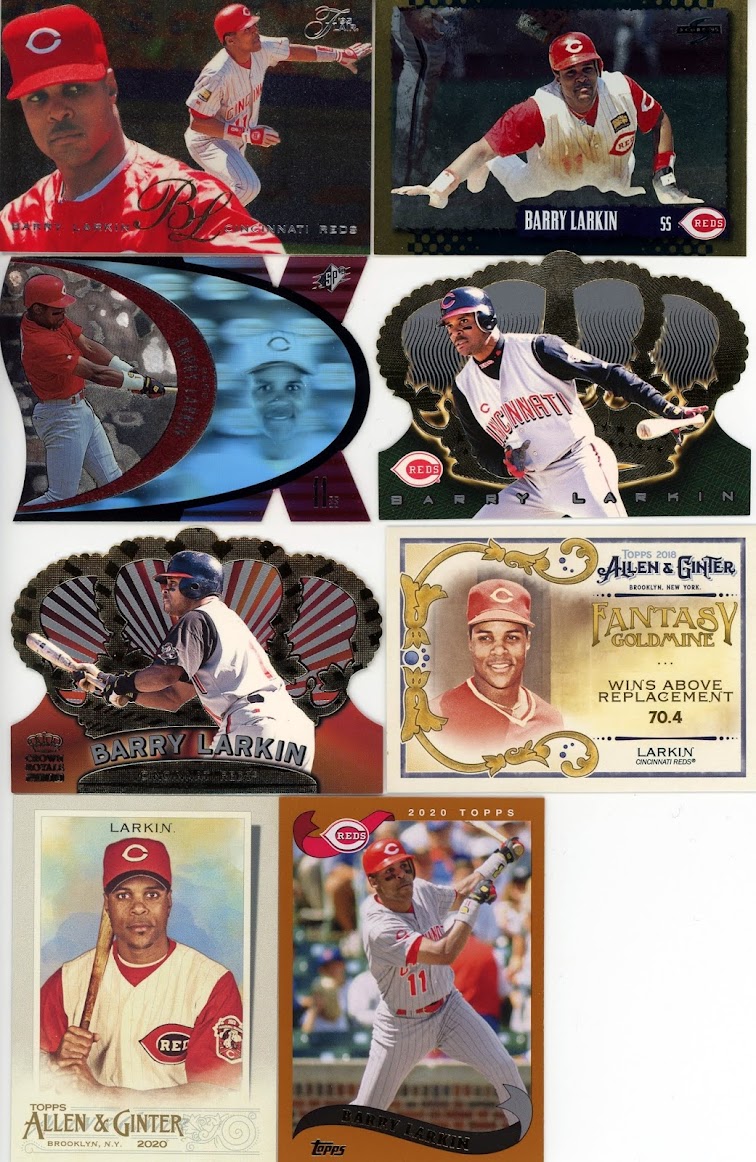 This last scan includes the horizontal cards before returning to the final part of verticals. I just felt like it would look cleaner that way, so that's the order I'll talk about them here.
The '95 Flair card that leads off this scan is a good example of what that higher-end product went for, and I'm glad all these years later that they're so cheap to acquire considering their quality. Joining it from the same year is Score's Gold Rush parallel, which I think looked better the following year but is still quite nice in the form you see above.
And now, how about a trio of die-cuts? Upper Deck's SPx came on the scene with a bang in 1996 thanks to its super premium hologram/die-cut combo, and in my opinion, it got even better with its sophomore effort, giving it pleasing curves on one side and an "X" cut on the other. That gem is joined by two years of Pacific's Crown Royale: 1999 and 2000. I prefer the team coloring and the interesting font on the newer card more myself but both are done in the set's cool crown motif very effectively, and I'm glad Barry was still considered baseball royalty and made the cut (no pun intended) those years.
The final horizontal card here is a 2018 A&G insert called Fantasy Goldmine. I do find it odd that Topps chose to highlight WAR, a stat that I've never seen used in fantasy baseball, plus I'm not sure where they got their number--Barry's the owner of 70.5 bWAR and 67 fWAR. Either way, he earned that number thanks to both a good bat and glove.
Finally, we have a pair of 2020 Topps-branded base. One of them is once again Allen & Ginter, which looks like a typical example of that product, though I do like the Reds jersey they used for the image. Much better in my eyes is Larkin's 2020 Archives base as it uses the 2002 Topps design. I was a fan of the brand way back then because it didn't suck like it does now, and I recall having fun opening at least one box of each series that year since it was, you know, affordable and fun. I'm sure some of my love for the design is nostalgia-based, but in general it's just easy on the eyes too.
Now that I've covered each card you see scanned here I can announce that I've hit a few new milestone for my Larkin collection: 800 cards! Thanks to Sportlots I now have 807 of Barry's issues, good for third place in my baseball collection as I mentioned earlier: 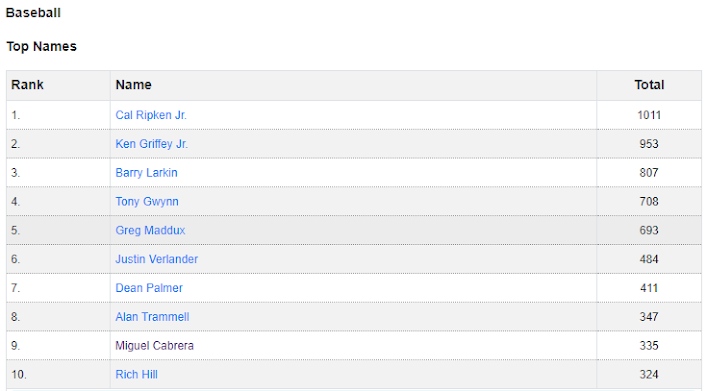 I sure wouldn't mind getting him over that 1000 card mark like Ripken (and, soon enough, Griffey), so I'll continue working at it via my favorite card acquisition sources.
Those of you who've enjoyed any part of this series can look forward to roughly three more posts, as stated earlier, and I hope those will capture your interest as well!
Posted by Dennis at 8:40 PM