No-hitters have been in the news quite a bit this season, mainly since we've already seen six of the real McCoy, nine-inning variety, and those took place before the calendar even flipped over to June! That's a lot, but I think they're still super exciting, even as we can pretty much expect a few every year--especially if Texas, Cleveland, and Seattle keep getting victimized (two each this season). Tigers fans were even treated to a gem thanks to Spencer Turnbull, who no-hit Seattle last month.

But it hasn't been that long since Detroit was celebrating a guy twirling two such performances. Justin Verlander, a guy I sometimes talk about around here, dominated the Brewers in June of 2007, then the Blue Jays in May of 2011, to become only the second Tiger to double up on the historic feat with the franchise. Of course, he would also add a third in 2019, once again at the expense of Toronto, but that was as a member of the Astros. Super impressive, just not as cool since he'd been traded by then.

I definitely think about those two feats once in a while, especially since I have a newspaper front page poster celebrating the first one hanging on my wall in my "card room", meaning I see it every day. Still, I can't claim it was on my mind while I was flipping through Facebook Marketplace listings earlier this month and came across an interesting item: 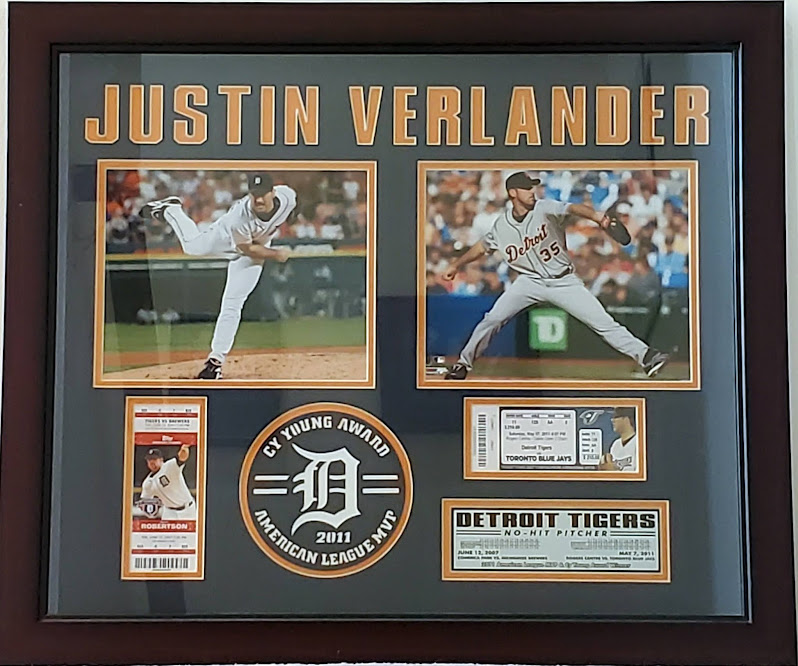 Say hello to the newest memorabilia soon to find a home on a wall in my card room: a 27"x23" framed/matted piece commemorating those JV no-nos I just discussed.
It looked really nice in the original listing and I sent the link to Paul and John in our running group Facebook chat, mentioning that I might make an offer. Then Paul mentioned that even the $50 asking price was low considering the quality of the framing. I was grateful for that feedback, even more so when the seller accepted my offer of $40, which my two collecting buddies called a "steal". I happily drove about a half hour northwest of Ann Arbor to bring this baby home.
For the purposes of this post I thought it might be fun to take a quick look at each part of the piece:

I mentioned the matting, which looks very sharp. Justin's full name is up top, cut out of the blue and done up in Tigers orange in big capitals. 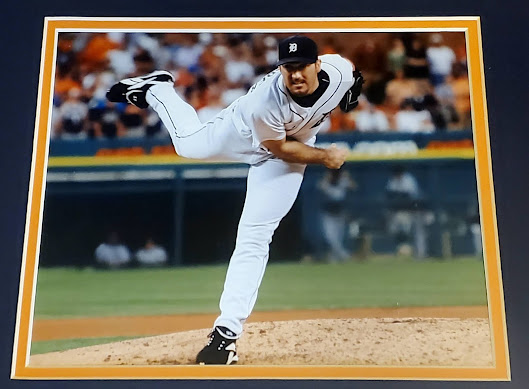 Below that is a pair of photos--I'm thinking glossy 8x10s?--from the games. On the left is a nice follow-through shot from the 4-0 win over Milwaukee on June 12, 2007. In the first no-hitter at relatively new Comerica Park, Verlander needed 112 pitches and struck out 12 Brewers (against four walks), with no hit batters or errors. A Brandon Inge solo shot in the third was the only run support he required, but Curtis Granderson and Placido Polanco would contribute a pair of runs in the 6th, and Inge would cap the scoring with a 7th inning knock. 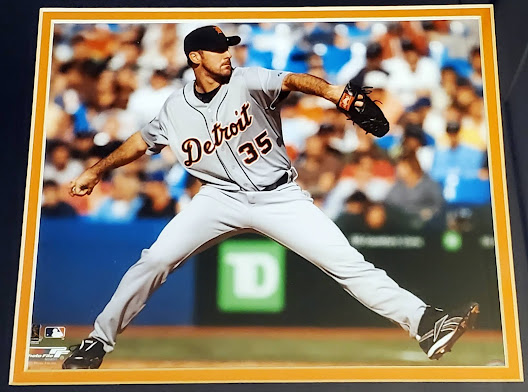 Justin wouldn't have to wait a full four seasons before he became part of the club of pitchers with multiple no-hitters. On May 7, 2011, he was slightly more efficient than in the first one, needing 108 pitches to down the Jays at the Rogers Centre. It helped that he limited his opponent to a lone walk and let his defense do a lot of the work as he struck out just four Toronto hitters. Again, no HBPs or errors were involved, plus he got even better run support, including HRs from Jhonny Peralta and Alex Avila in a 9-0 beatdown. 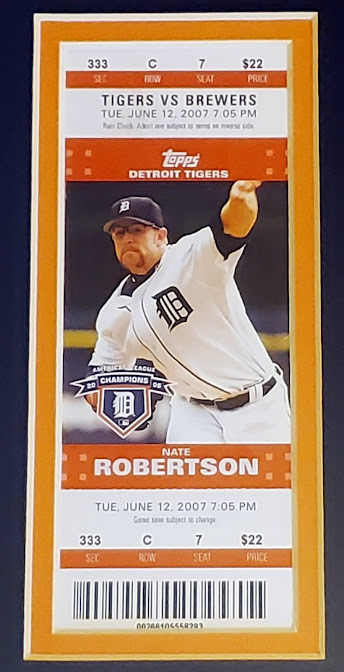 The photos are very cool but for a collector like me it's tough to beat getting a ticket from a significant even like these. Better yet, this 2007 version incorporated Topps' flagship design from that year (in Tigers orange, rather than the original black), giving the tickets a baseball card feel. The reminder of the previous year's pennant is quite nice as well. I'm sure my fellow Tigers fans remember pitcher Nate "Gum Time" Robertson, whose career most definitely peaked in '06. I wonder how many fans had an inkling of the history they'd witness that evening as they entered the Comerica Park gates? 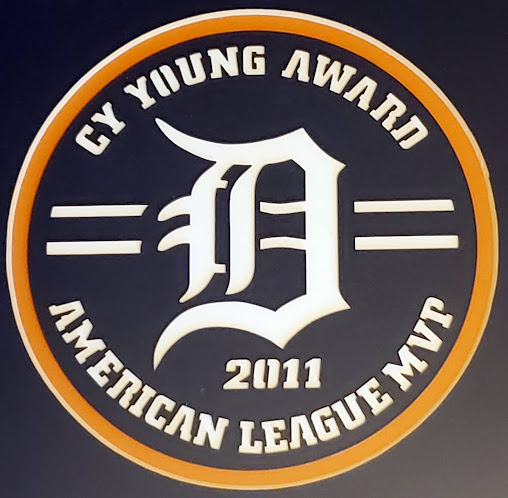 Between that ticket and the other items at the bottom is this cool die-cut circle with the olde English "D" dead center, and it highlights Verlander earning the rare dual distinction of league MVP and Cy Young awards in 2011. JV went off for 24 wins (and only five losses!) to lead the AL (as the only 20-game winner), and paced the league in ERA (2.40, to edge runner-up Jered Weaver by 0.01), innings (251.0), strikeouts (250), and WHIP (0.920), so it's no wonder he was the unanimous choice for the Cy.
He also led the American League in bWAR at 8.6 and took home 13 first-place votes in the MVP race, giving him a comfortable lead over Boston's Jacoby Ellsbury. That made him the third Tigers pitcher (Denny McLain, 1968, and Willie Hernandez, 1984) to double up on those awards.

Here we have the ticket from the 2011 game, and boy would it have been a nice one to have that afternoon! This one set its owner back $210 and would have given them a premium up-close view near where the third base side dirt gives way to the outfield grass. Like the other one, it looks terrific mounted in place here.

The final item is this summary of the two games that includes the box scores and another reminder of the hardware Justin earned in 2011. I'm not sure if this is a custom item someone put together after accumulating each component, or if it was more widely produced, but either way I'm glad I jumped at the chance to grab it. Looking at each item that comprises it or the whole thing at once, I'm proud to be able to show it off in a place of honor on the wall. Definitely worth $40, if not at least triple that!
So that's my latest Facebook Marketplace pickup. Please let me know what you all think in the comments! I'll try to be back soon as I look to get closer to finishing up my Sportlots posts.
Posted by Dennis at 8:56 PM