Though it rarely gets me these days, sometimes FOMO is real. I have no problem with the fact that I'll never get to 100% on most of my player collections, so I'll often pass on a rare item when the price is out of my comfort zone. But once in a blue moon I'll see something I just have to have, and fear of missing out kicks in.

Thankfully, with my overall spending down the past few years, I can easily justify splurging here and there. That's exactly what I did when a very interesting item came up on one of my saved eBay searches: 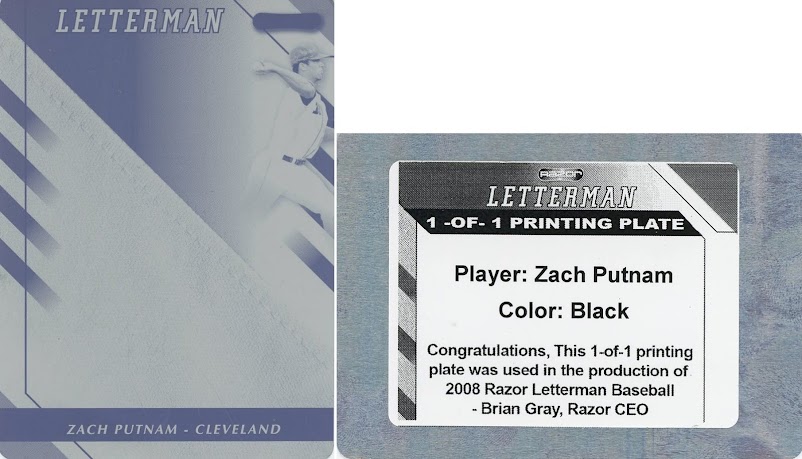 This card is at the intersection of multiple things I like to collect: former UM pitcher Zach Putnam, plates/1-of-1s, and 2008 Razor Letterman. It's a black printing plate from that fantastically fun product, and you really don't see super rare items from it come up for sale very often for whatever reason.
I think by now my reasons for collecting Michigan sports alumni and 1/1s are clear, but since it's been quite a while, here's a recap of my experience with 2008 Razor Letterman. I broke two cases (10 boxes each, five packs per box, one autoed letterman patch per pack) over a pair of group breaks back when you could find them in the neighborhood of $30-$40 per box, an amazing value given some of the names you could pull. Out of 100 cards I never managed to pull a single Putnam, but I bought and traded my way to a pretty nice collection: 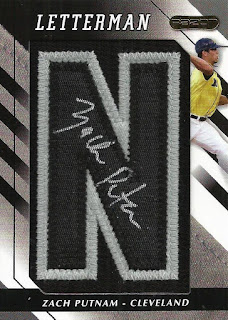 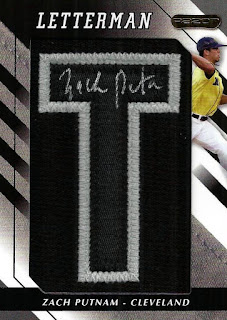 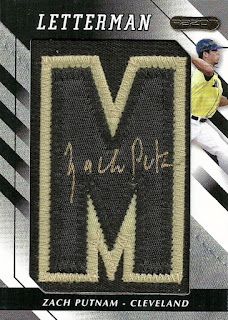 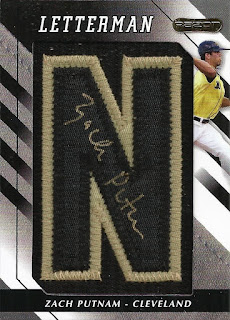 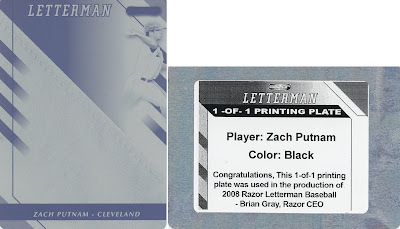 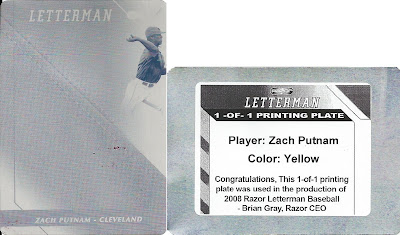 And today's Black printing plate to go along with the Yellow plate I already owned
When you see all of those together like that maybe you can understand why I didn't make too much of a fuss over spending a bit more than $20 (around $15 plus tax & shipping) when my butter zone for 1/1s of players that aren't my absolute top priority PCs is more like $8-$15. Passing on something like this would have been totally different than letting someone else overpay for, say, a plate from 2017 Topps. Like Bon Jovi said, I'm halfway there when it comes to this plate set, plus I now have four of the ten 1/1s of Putnam from the product, so I'm almost halfway to that crazy goal.
Who knows if I'll ever find the other two plates, much less any of the other 1/1 letters, but if I do, you can bet your bottom dollar that I'll be trying harder than usual to come out a winner as a bidder or buyer. There's only so much missing out you can live with, you know? 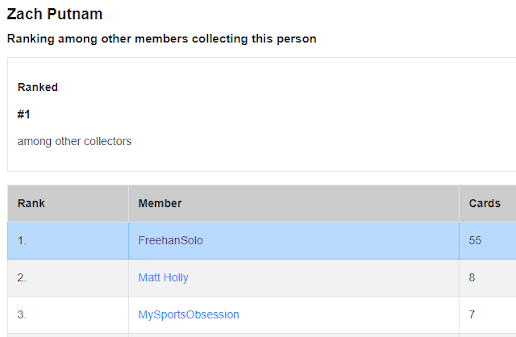 As you can see here, today's card continues to pad my dominant TCDB lead among Putnam collectors, with buddy of the blog Jeff pretty close to at least tying for second. You can see the complete list of those cards here, 35 of which are hits, broken down into
You may be surprised to find out that he's my #2 in the Michigan Baseball hits collection (only about 100 away from Rich Hill!), with Bill Freehan next at 25, J.J. Putz at 22, and Barry Larkin with 21; nobody else has hit the 20-card mark yet.
I actually have another (non-FOMO) plate from eBay on the way, one I spent a bit less on (but would have been ok with losing), and I'll show that off when it arrives. But given the momentum of posting I've built up over the past few days I didn't think it was worth waiting until then. Now I just need to see what I want to scan and post next from my piles of Sportlots cards! I can't promise I'll blog for a fourth straight day but I'll try not to keep those of you interested waiting too long. I wouldn't want you to miss out!
Posted by Dennis at 8:29 PM