Previously: Quick summary and set wants; Big and small we have them all!
Though I just received a couple trade packages yesterday, I had this post mostly ready to go, so today you're getting Sportlots cards and then it's back to incoming trades!
I've got a mix of team- and player-themed posts planned for this series, and today will be one of those single-subject features. Thanks to Sportlots I grabbed 33 new cards for my Ted Simmons PC. As a reminder, while the recent HOFer never played a game for Michigan Baseball, he still fits my Michigan baseball alumni collection, which includes guys who attended UM (and are therefore alumni) and then appeared on trading cards; Suiting up for the Maize & Blue is not a requirement.
Simmons is a relatively recent collection for me, but I've seen that grow a nice amount thanks to some purchases and trades over the past year. He has around 500 items listed on TCDB right now, spanning 1970, the year before his OPC and Topps RCs were produced, to this year (Leaf, Sport Kings, and a Topps buyback). His career lasted from 1968-1988 and the mainstream cards produced for him during his run went from 1971-1989, with some post-retirement issues popping up here and there.
Most of what you'll see here will be cards produced during his career, mostly because that tends to be my main PC focus early on in their collections. As usual, though, there's still a nice mix of cardboard to enjoy, and I'm curious to see what everyone's favorites and dislikes might be.
And now, on with the show: 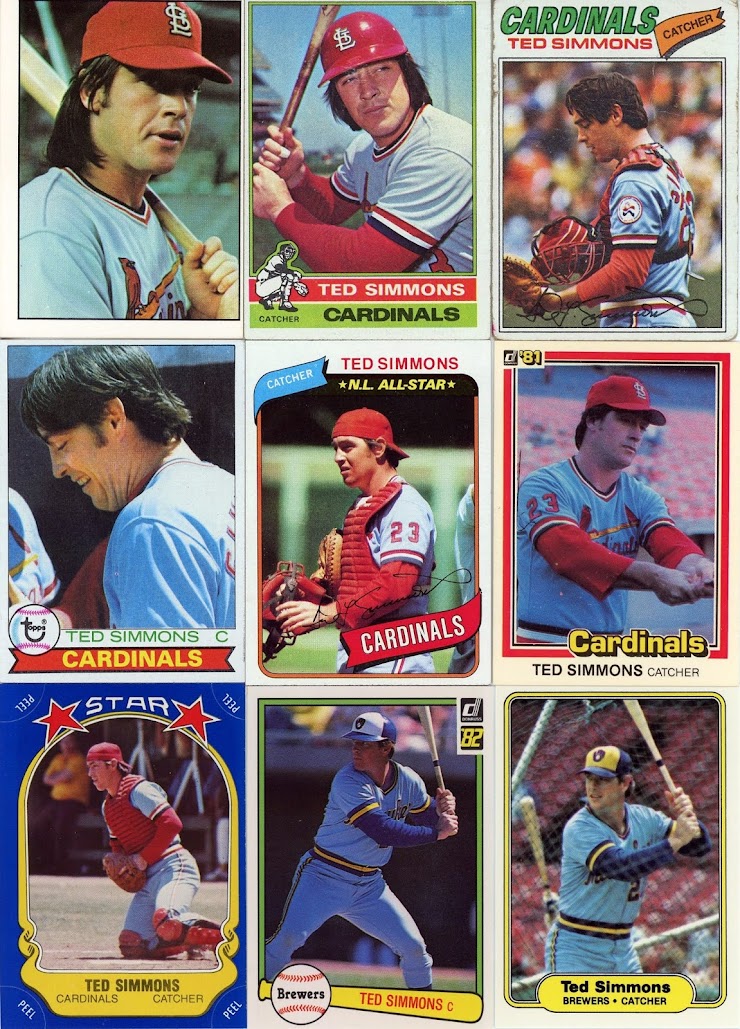 I'll never understand fashion from the 1970s, especially hairstyles. That said, I don't understand any of that in general, and lord knows I cringe at the way I looked in the 80s and 90s, so I'm not one to judge!

Anyway, it's great to kick things off with some "true" vintage, which I tend to think of as anything before the 1980s (though, like "oldies" music, that definition could change at any point!). SSPC is the type of product where you're likely to find supplemental cards of some of your more obscure guys, not to mention stars like Ted, and it's become a staple of my collections of players from that era for sure. Topps issues from 1976, '77, and '79, finish off that decade while filling in some early gaps. Though it's somewhat beat up, I like the '77 best here, since I tend to prefer game/action shots to posed photos. Plus catcher cards tend to be very cool.
Don't be too shocked that almost everything else from here on out is from the 80s, thanks to the increase in manufacturers producing cards. 1980 was the last year Topps/OPC was it for choice, and that resulted in another terrific catcher card, one that highlights Simmons' sixth of eight All-Star nods. 1981's items include Donruss' solid debut, plus a sign of things to come for another new kid on the block (sort of), Fleer, and a very cool sticker. Then a pair of '82s--Donruss and Fleer flagship this time--reflect the December '80 trade that sent Simmons, Rollie Fingers, and Pete Vuckovich to the Brew Crew for four players, one of which was fellow Wolverine Lary Sorensen. '81 was a down year for the C/1B/DH, but he did get to experience the playoffs for the first time, an ALDS loss to the WS runner-up Yankees. 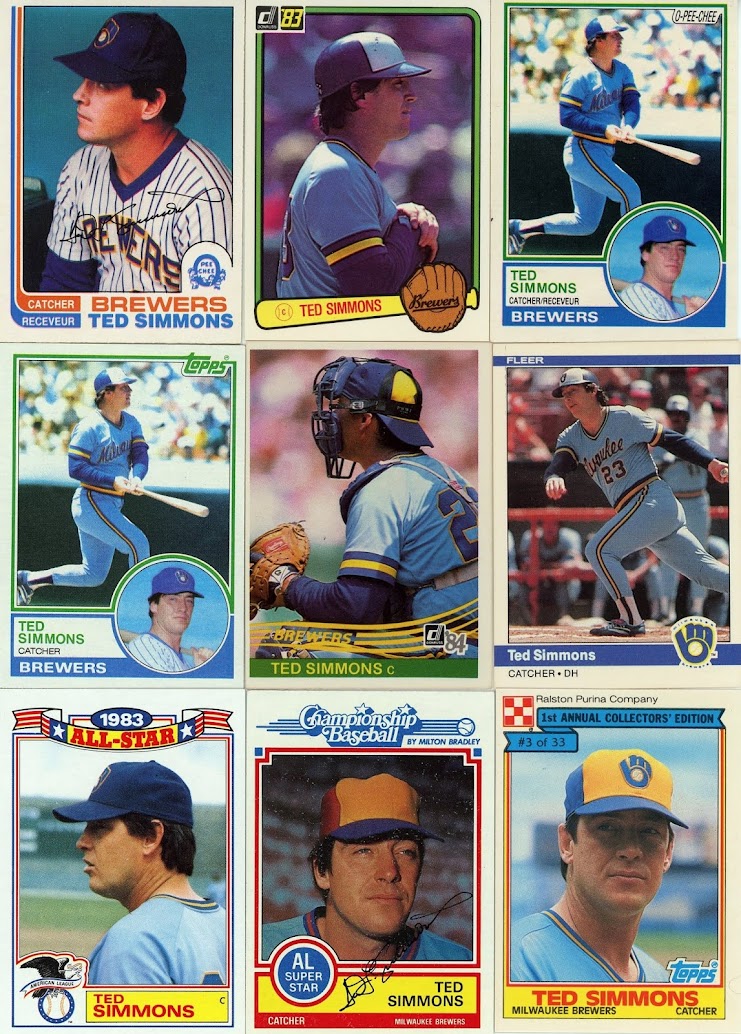 Here we close out 1982 with an OPC base. I don't have much to say about that product other than that you'll see a few more instances of "Canadian Topps" along with Leaf, "Canadian Donruss", this evening, but I do want to highlight Night Owl's post comparing some OPC and Topps cards, if you somehow didn't read it.
1983's cards feature stats from '82, Ted's second and final trip to the postseason, where his Brewers defeated the Angels to reach the Series but lost in seven to his old team, the Cardinals. The trio you see here from '83, the year I was born, are Donruss, OPC, and Topps.
The 1984 stuff changes things up a bit after normal base stuff from Donruss (a set I sometimes get nostalgic for, for some reason) and Fleer. While the '84 Topps Glossy All-Stars issue (celebrating Ted's final appearance in the Midsummer Classic) isn't that out of the ordinary, we do venture into the realm of the oddball with two other Topps-related ventures. First is one of 30 cards made for a Milton Bradley-produced game, with backs that determined what happened based on dice rolls. The other was done as a food issue for Ralston Purina, though the 33-card set didn't end up being anything like "annual", popping up again only in 1987, as far as I can tell. 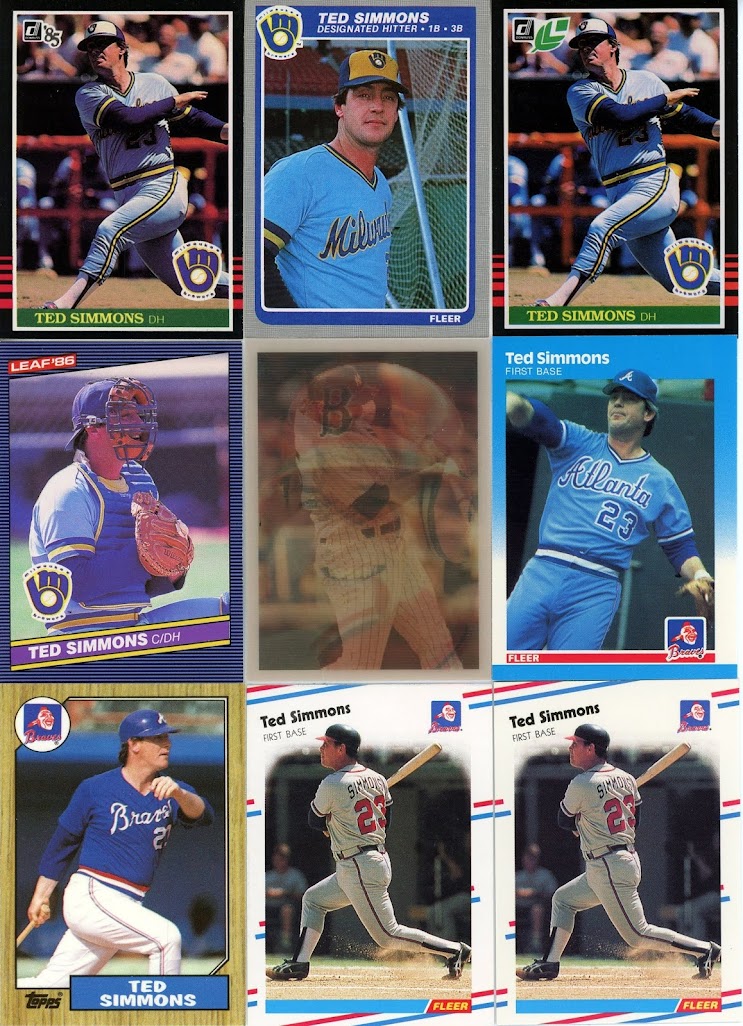 In this scan we kind of get moving in a hurry, spanning 1985-88. First we have '85's Donruss/Leaf pairing, plus another Fleer base. 1986 includes just Leaf (I already had the Donruss card) plus one of my favorites, Sportflics. While I'd previously landed the regular Sportflics card, this one is from the Decade Greats set that's popped up in my collection on occasion. Here Simmons is grouped with fellow "Best 70's catchers" Thurman Munson and Carlton Fisk. Before his untimely death Munson was on his way to a Hall-worthy career, so all three of these guys should have been together in Cooperstown.
Starting with 1987's cards we get shots of Simmons with his final team, the Braves, to whom he was dealt in 1986. There he averaged around 75 games over his final three seasons, winding down his 21-year career. Here you see a couple shiny parallels from '87: Fleer's Glossy and Topps' Tiffany. Joining in the fun from '88 are Fleer's base and Glossy versions. Take my word for it that the last card in the above scan is much shinier than its predecessor. 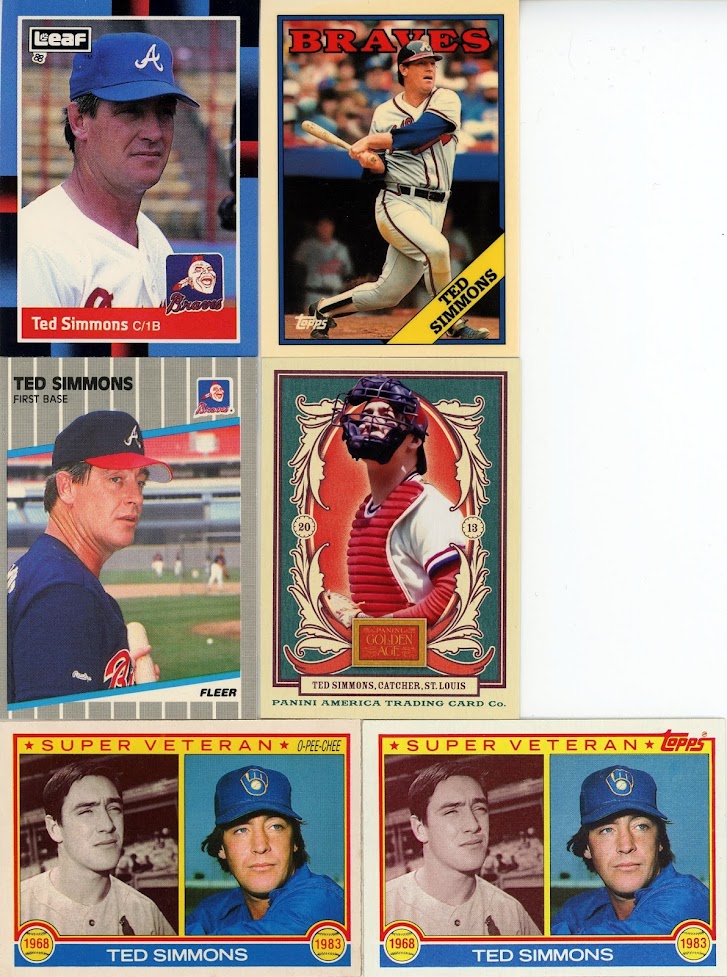 Scan #4 closes out 1988 with a final Leaf issue and another Topps Tiffany card. '89's only representative is the final card I needed from that year, his Fleer Glossy appearance.
After that we have today's lone "recent" item, his base cameo in Panini's 2013 Golden Age product. To go with that I have one of his five (not including 1/1s) minis, so I need to track down his White base parallel and autograph.
And finally we have one more OPC/Topps combo, taking us all the way back to 1983. Topps doesn't really do this kind of thing anymore but you used to see these throwbacks to stars' earlier days a decent amount back then, whether they looked like this or went with the "turn back the clock" style.
I'm quite happy with the progress I made towards Simmons' checklist on the cheap thanks to Sportlots. My count currently sits at 79, and though I lack bigger stuff like his earliest stuff (especially those tough '71s) and autographs, most of my wantlist is looking quite reasonable. I'll keep at it the next time I work on some online card orders from my favorite sites.
After I put these away I'll be working on a couple new trade posts to say thanks and give some well deserved credit to two very cool trade partners, so watch for those next!
Posted by Dennis at 7:57 PM