Pacific Legends: for three years this better-than-expected low-end product from the manufacturer that would eventually be able to produce cards of current Major Leaguers (in English, even!) offered collectors another way of collecting some of the legends and past fan favorites of the game.

The sets came up on my radar last Summer when I was able to grab a couple boxes of the '88 version among a bunch of other stuff (generally smaller boxed sets) on Facebook. Fuji bought one and I busted the other, coming one card shy of a pair of complete sets.

In talking to Fuji about his interest in these sets, I later found out that he decided to keep the box he got from me unopened, and then grabbed the full 220-card '88/'89 set on eBay to go with a complete 1990 set out of a box he did open. This was relevant to me since he generously sent me a near complete '90 set earlier this year.

Thanks to Cardbarrel and Spotlots I was able to finish up my second '88 set and knock out the remaining 90s I needed, leaving me shy just the '89 version. I thought I'd purchased just that from eBay a couple months ago, but it ended up just being something like 20% of it, so I returned it.

Then, in Mid-April what did I come across on eBay but the very same '88/'89 set that Fuji had purchased for himself, also at under $10 shipped. 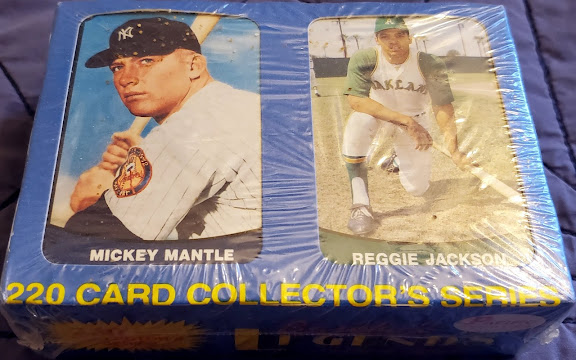 I pulled the trigger and happily received this package not long after.

As a reminder, the 1988 and '89 products comprised one continuous set, with the former numbered 1-110 and the latter picking right up again at 111 through 220. By the way, a nice bonus of this boxed version was the pair of checklists, which weren't packed out as far as I can tell. I can't claim to have removed the sets completely undamaged from this unorthodox packaging, but I'm fine with how the cards look.
Since I did a long-ass video of my 1988 box break and that allows you to take a good long gander at those cards, I won't show any off here, but I did think it was worth doing some highlights from '89 since I had very few of these in my collection before this purchase: 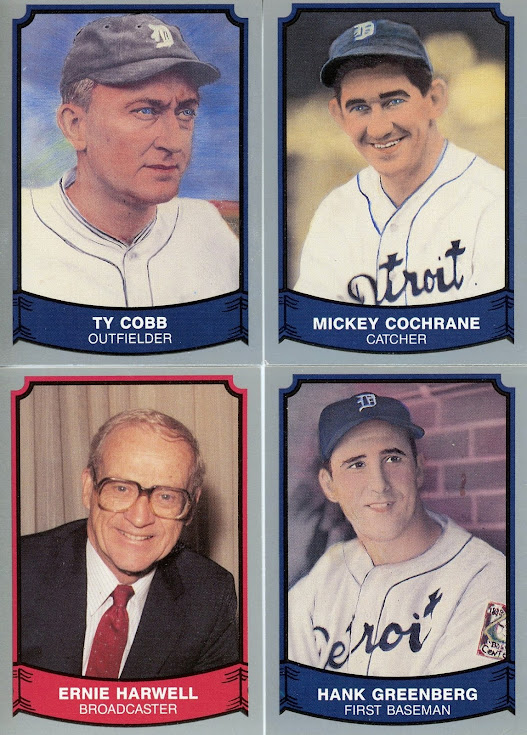 The Tigers included HOFers Cobb, Cochrane, Greenberg, and announcer Ernie Harwell, whom you would be unlikely to see in a set made by someone else. 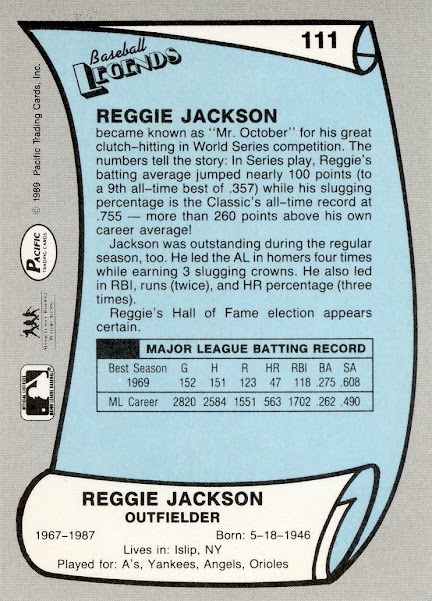 I grabbed a back so you could compare it to the '88s. The fronts and backs are pretty much the same between '88 and '89 with the power blue background color on the latter being the only difference; the '88s are yellow. I also thought the back of this Reggie would be fun to scan because "Reggie's Hall of Fame election appears certain." definitely made me laugh. 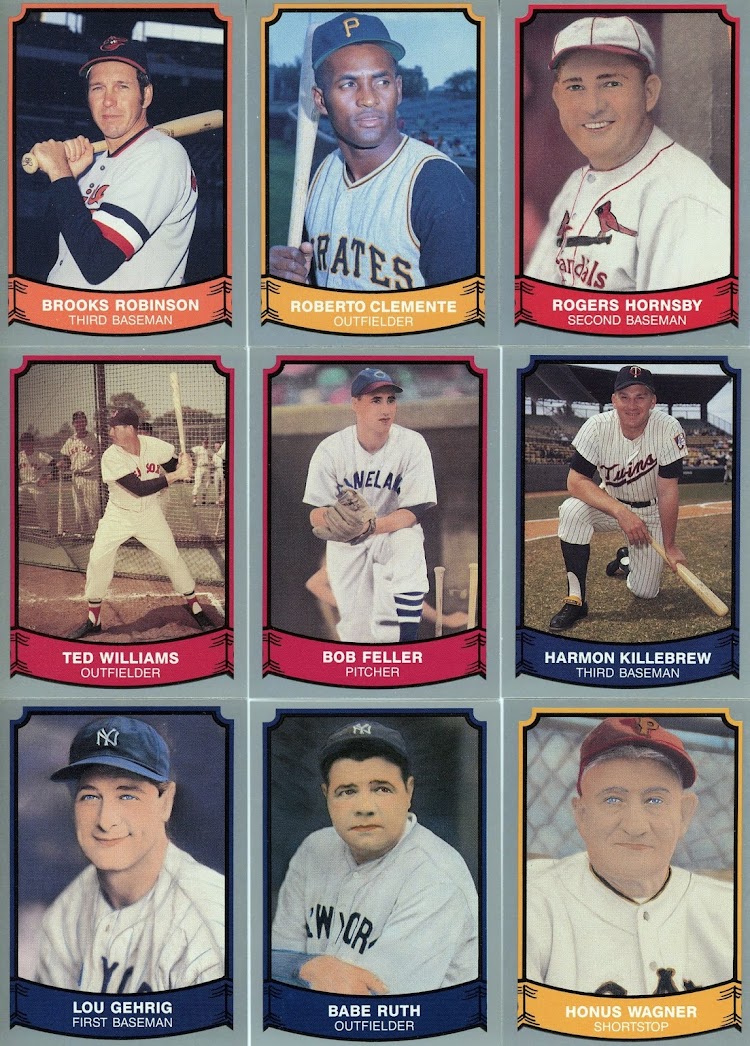 Here's a selection of some of the legends from the '89 set, all well known names. As you've probably noticed, art work was used for most of the pre-WWII players, possibly to avoid having black & white images mixed in, I'm not sure. 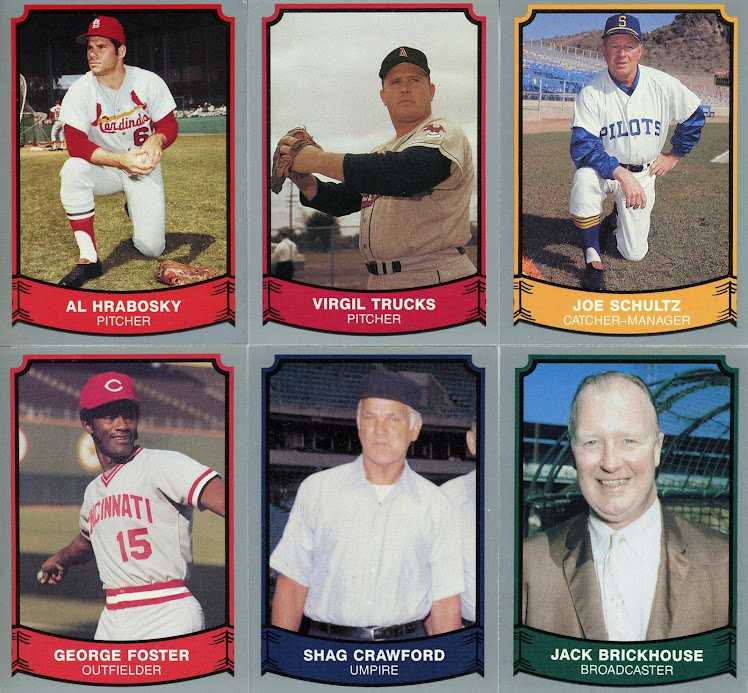 I thought it would be fun to show a few of the fun/interesting appearances as well, from fan favorites to an ump and another broadcaster. A Mad Hungarian, former Tiger, catcher/manager of the Seattle Pilots, and mutton-chopped dude who slugged 50 HR (not to mention an umpire nicknamed "Shag") definitely keep you on your toes!
Since I'm showing those off this evening I though it would be worth doing the same with the completed '90 set since I never formally did that previously, with just a few examples when Fuji sent me the main stack and then some of the ones I bought to complete it. 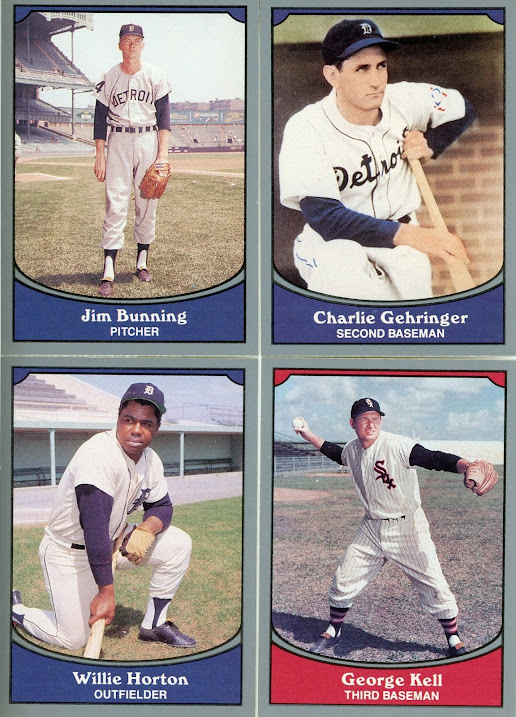 The Tigers this time included HOFers Bunning and Gehringer (the one UM guy I believe you'd find in all three series), fan favorite Horton, and also HOFer Kell, whom I'm including with this group because he was with the White Sox for all of three seasons, as opposed to seven with Detroit. 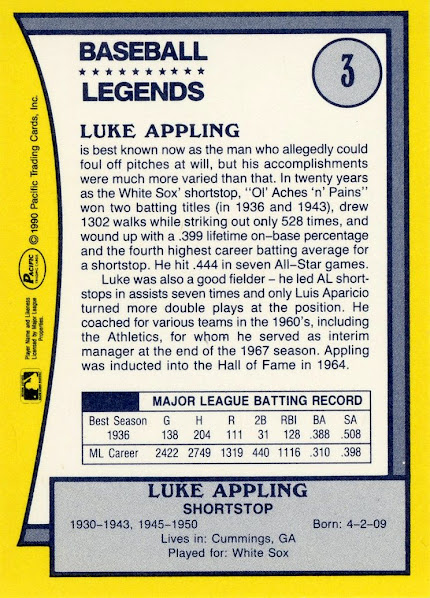 If you compare the fronts of the cards in the group above to the '88 and '89 versions you can notice a couple subtle differences in the top corners and "banners" on the bottom, but they're still pretty close. The backs give you more clues that you're looking at a different product, though, especially with the 110-card set starting things back at #1. Color-wise it's like an inverted 1988 card, plus you lose the kind of scroll design for the writeup/stats area. I think I prefer this one a bit more, but there's nothing wrong with the prior versions. Also, how amazing is it that Appling was still alive when this card was made? He passed early in 1991, a few months shy of 84 years old. 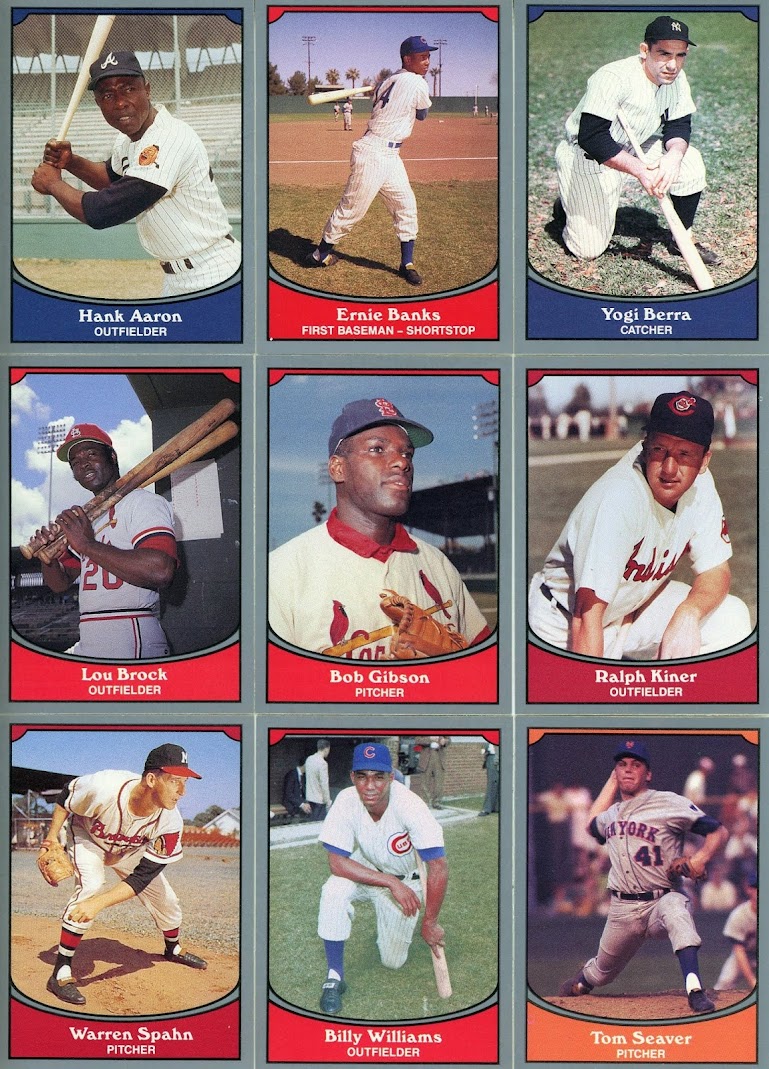 There were lots of great choices for legends to show off, like these guys. If you remember some of the membership of the '88 set then you might notice some repeat cameos here, like Aaron (#1 in both), Banks, and Berra, but it's kind of understandable since it doesn't seem like it was meant to be a third series, but its own thing. 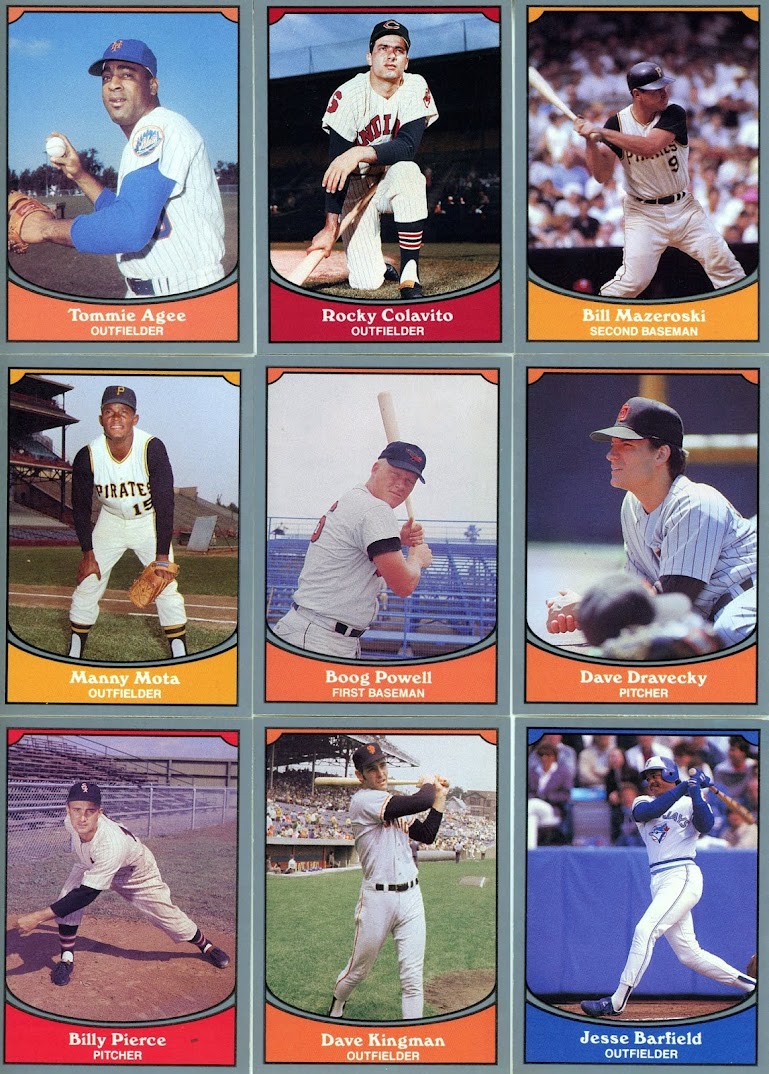 There were lots of fun choices among the other fan favorites, though, and I figured at least a few of you would see one or more guys you remember fondly here.
So now I can happily call myself the owner of all three two three (yeah, we'll go with three) Pacific Legends sets from 1988-1990. I got to bust a box, do some old-fashioned set-building, and even sort cards from a previously unopened set, all for under $30. Money and time well spent for sure, once again with a very appreciated assist from Fuji.
On a related note I have two completed '88 sets (#s 1-110) available for trade should anyone ever be interested in dealing for one or both, so hit me up!
I had another eBay pickup arrive just today so that'll probably get its own post soon, plus I'll be trying to get back to the huge Sportlots haul, so keep an eye out for plenty of new cardboard soon. As for me, I'll be enjoying the satisfaction of filing these away in a box in my card closet.
Posted by Dennis at 8:50 PM