It's been a few days since I got my COVID vaccine, and after about 24 hours worth of side effects I'm feeling great again, not to mention happy that this likely means I'll be able to return to my favorite monthly card show in a few weeks. It's been 13 months since I could go to a show, but fortunately I've been able to keep things going thanks to some of my favorite online sellers. Back in January I gave Baseballcardstore.ca a trial run and declared it a success. Then in early March I gave Cardbarrel another shot for the first time since they'd rebranded from JustCommons, and that went well too.

Shortly after that, having crosschecked prices and availability with Cardbarrel, I put together my latest Sportlots order. This one was another doozy at 650+ cards spread out over 14 sellers. A small percentage of those were set aside for three trade packages, leaving me with more than 600 new cards for my various collections.

I grabbed some set wants but mostly focused on player collections, especially guys that I've been focusing on more recently: Dean Palmer, Tony Phillips, Ted Simmons, and Mickey Tettleton. But I still managed to put together nice stacks of guys like Barry Larkin and other Michigan Baseball PCs (Dick Mountain represent!) along with Al Kaline and some of my Tigers favorites.

There's a lot of stuff to cover and I'll figure out how I'll be posting it as I go, but you can look forward to a bunch of different players, sets, and designs, and even a mix of sizes and formats. I grabbed a ton of stickers plus minis, oversized items, some coins, and other weird stuff. When you PC as many guys as I do you're gonna benefit from lots of variety.

You won't see a ton of variety in this post as I'll be briefly recapping the numbers on this purchase and then beginning the series with cards from my set wants, but no worries, there'll be plenty to gawk at soon! (And if numbers bore you, please feel free to skip down to the cards immediately--I won't judge you!)

This time my purchase consisted of:

Today's cards:
Today we'll be looking at the cards I received for sets I'm working on. While I have very few I'm still chasing, I had five I was able to attack here, four or which I finished up: 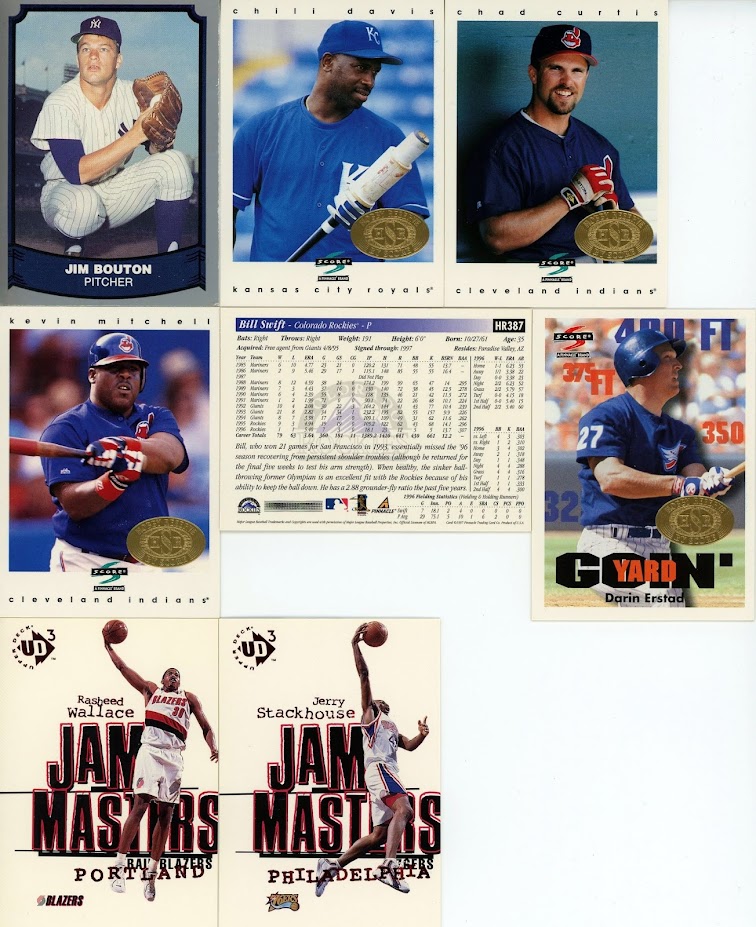 We'll open things up today with the only card I didn't get more than one of from my 1988 Pacific Legends box break last year. Late Ball Four author and former Yankees pitcher Jim Bouton finishes up a second complete set of this fun low-end fan favorites-type product, and I'll happily make it available in trade to anyone who's interested! I'll also credit this card as the biggest reason I started this latest Sportlots purchase.
Nine years later Score released what I believe were hobby-only premium versions of its Series I and II base sets. Series I's version was called Premium Stock and fronts were gray instead of white while Series II was called Hobby Reserve and went back to the white fronts. Both series' cards were thicker than the regular base and had gold foil stamps up front with the "Premium Stock" or "Hobby Reserve" name. I bought some boxes of both and eventually completed each series...or so I thought.
As I was scanning in a bunch of my Hobby Reserve cards on TCDB I realized that a number of mine were of a variation that had different card numbering than most of the set, which is numbered "HR###" (as seen on the back of Swfit's card). Not one to let that stand, I sought out the "correct" versions I needed, which were helpfully labeled on Sportlots, and I landed the five you see above, all at fairly reasonable prices. Hopefully I'll track down the final five I need so I can re-cross that off my list!
Last up in this scan is a pair of cards from roughly the same point in time. My brother and I collected some basketball for a bit in our younger days so I have a few complete and in-progress sets from the sport. It's been long enough that I can't recall if we bought a box or just some packs of 1997-98 Upper Deck UD3, one of the manufacturer's short-lived but cooler products. Either way, I was apparently only two cards short, with both guys actually being former Pistons. If you weren't aware of UD3, especially its debut version in multiple sports, I highly recommend you check it out! 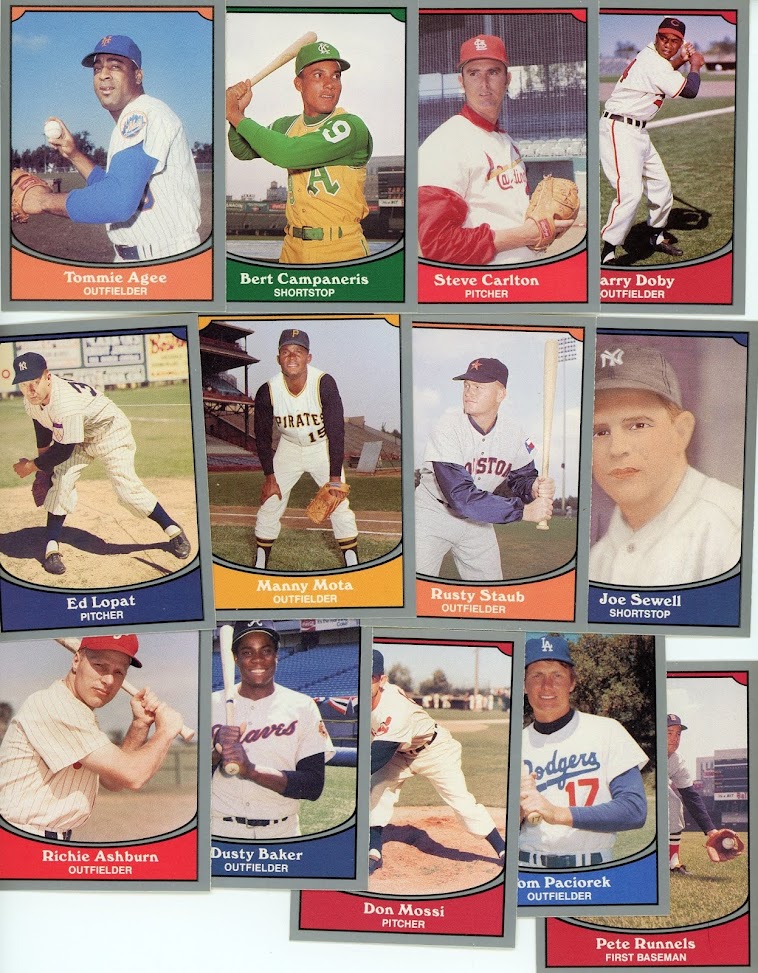 The other two sets needed enough cards to try to squeeze each pile into its own scan. First is the 1990 version of the Pacific Legends product you just saw. This is a set I've mentioned a few times since Fuji so generously gifted me an excellent starter lot back in January. I found three of the cards I needed for better prices at Cardbarrel and snagged the rest on Sportlots, meaning I only had to pay a couple bucks to sew up another very cool set. It's another who's-who of fan favorites and icons, and I may just have to show the whole thing off in its own post soon! 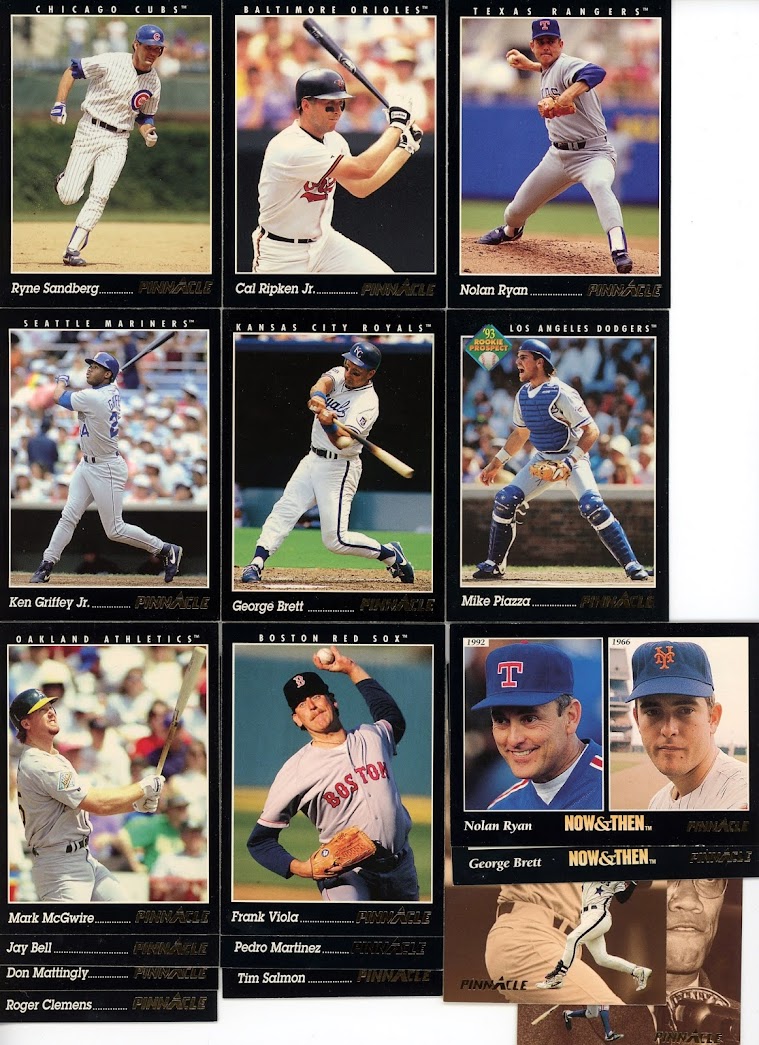 Last up is 1993 Pinnacle Series I. A huge chunk of this set was part of one of my bigger Facebook Marketplace purchases last year around this time, and it seemed like a reasonable task to try to complete it. One or two TCDB trades got me closer, and between the four cards I grabbed from Cardbarrel and this bunch here I can now call it complete. You can see this is a pretty good group of stars but I got all of them for the minimum $0.18 except for the Griffey, which I had to re-order (still free using a refund/loot!) as the first seller I bought it from couldn't find it. It was fun adding new cards of both Juniors to their PCs as well as to a set I was completing. While I vastly prefer Pinnacle's design from 1994 on, this is a cool early/mid-90s set to have in the old collection.
That's it for today but after I happily get all of these set cards put away I'll work on figuring out what you'll get to see next. Stay tuned for lots of different players on multiple designs, oddball stuff, stickers, and more!
Posted by Dennis at 8:11 PM