2021 Cardbarrel purchase: a barrel of fun, or an Easter feast! 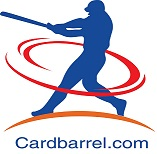 Happy Easter, y'all! I decided to spring into action today, the third day of Detroit's season (hey, 2-1's not bad!) and show off my first purchase from Cardbarrel since they switched over from the JustCommons name. Aside from the title of the site everything seems to be the same, including lots of reasonable prices and shipping, nice selection, and t he usual minor issue that seems to accompany all my orders there, though as usual I was taken care of by their excellent customer service. Two of the cards I'd ordered weren't included in the original shipment but they PWEd them to me eventually.
I managed to score more than 150 cards for just a cent over their $25 minimum purchase to achieve free shipping and managed to coordinate what I bought here with another Sportlots Box buy (coming soon!) so I could take advantage of Cardbarrel's lower minimum prices, with some cards as cheap as $0.12 (Sportlots sets the floor at $0.18), and free shipping. In the end I grabbed cards for 11 different player collections and a couple base sets I'm working on as well.
Here's a look at everything I ended up with: 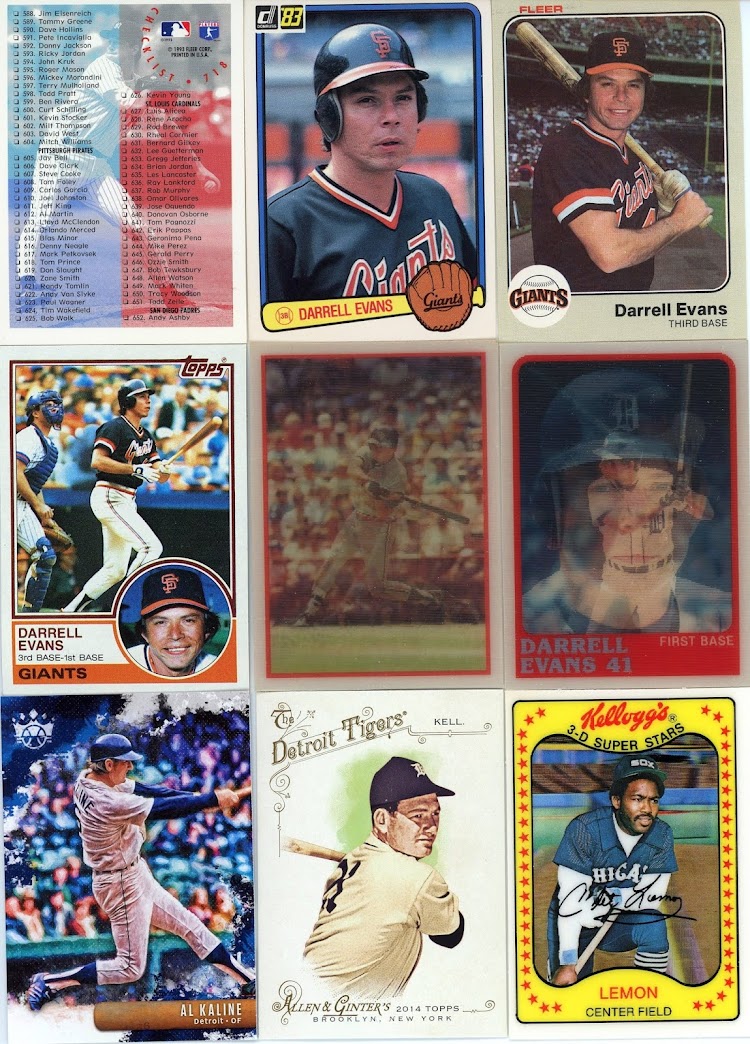 Here's the first of three scans of the smaller groups. Card #1 shows the benefit of using TCDB over Beckett: while the latter labels it as "checklist", the database made me aware that it's a new Abbott for my collection! I thought it would be fun to grab a few early 80s cards of Evans (and would love to add more at lower prices or via trade) plus I couldn't resist grabbing a couple Sportflics issues I needed too. Kaline and Kell form a nice pair in 2010s retro-themed sets. And that Lemon is one of a few Kellogg's cards you'll see in this space in the near future, including two more in this very post. 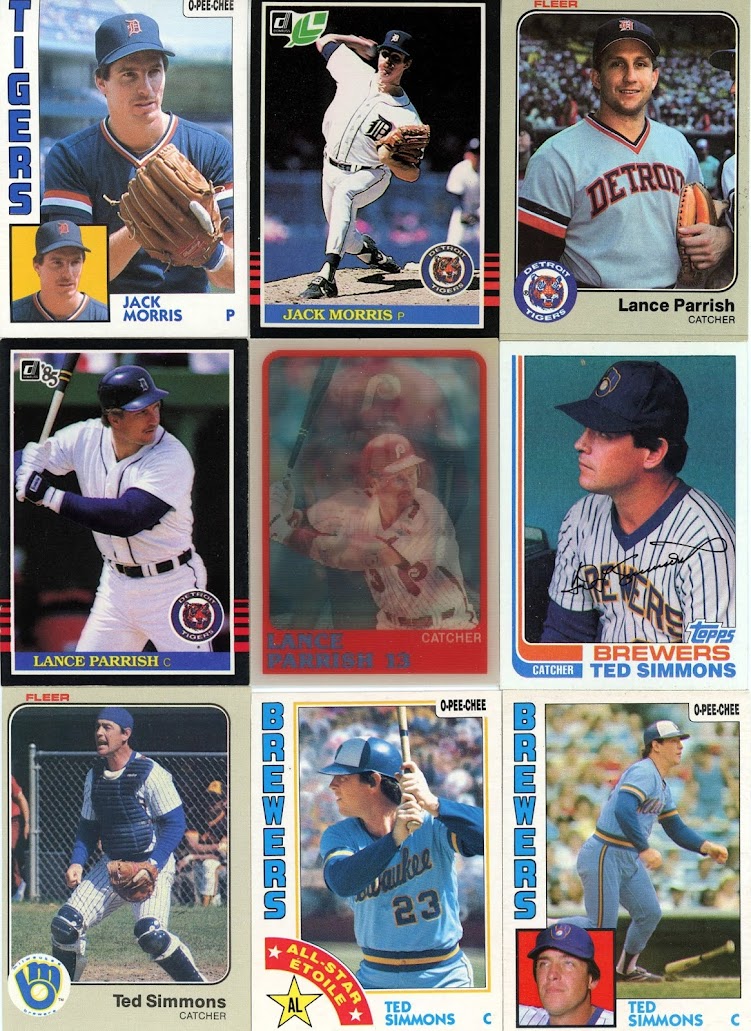 Morris and Parrish formed the battery that powered much of the 84 Tigers' success and I went after some 80s needs of them as well, including another Sportflics item, even if it shows Lance after he left Detroit. Speaking of catchers, Simmons was a pretty good one, and I had a good time adding some of his needs, eight in total, including what you see to lead off the next scan. It's nice to collect a number of guys from his era because many of their cards are plentiful and easy to come by. 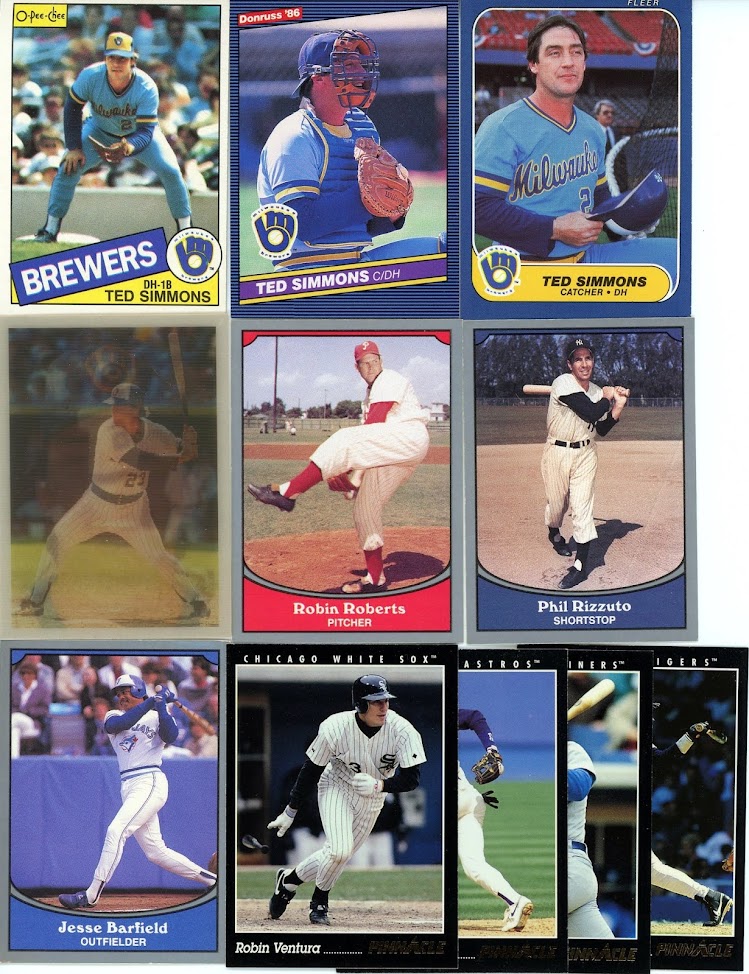 As promised seconds ago, here you see the rest of the Simmons cards, this time from the mid-80s, and yes I'm happy to see yet another Sportflics card I needed. The other items here are from 1990 Pacific Legends and '93 Pinnacle Series 1 to go toward my set builds of each. Both sets will be complete once my Sportlots package arrives, possibly as soon as tomorrow. I was able to complete the Pacific set at a pretty low price after being gifted a great starter lot by Fuji, and the Pinnacles came from the larger of my two pre-pandemic Facebook purchases last year. I had to get a bit creative to fit the latter here, but in case you care the other players are Andujar Cedeno, Jay Buhner, and Rob Deer. 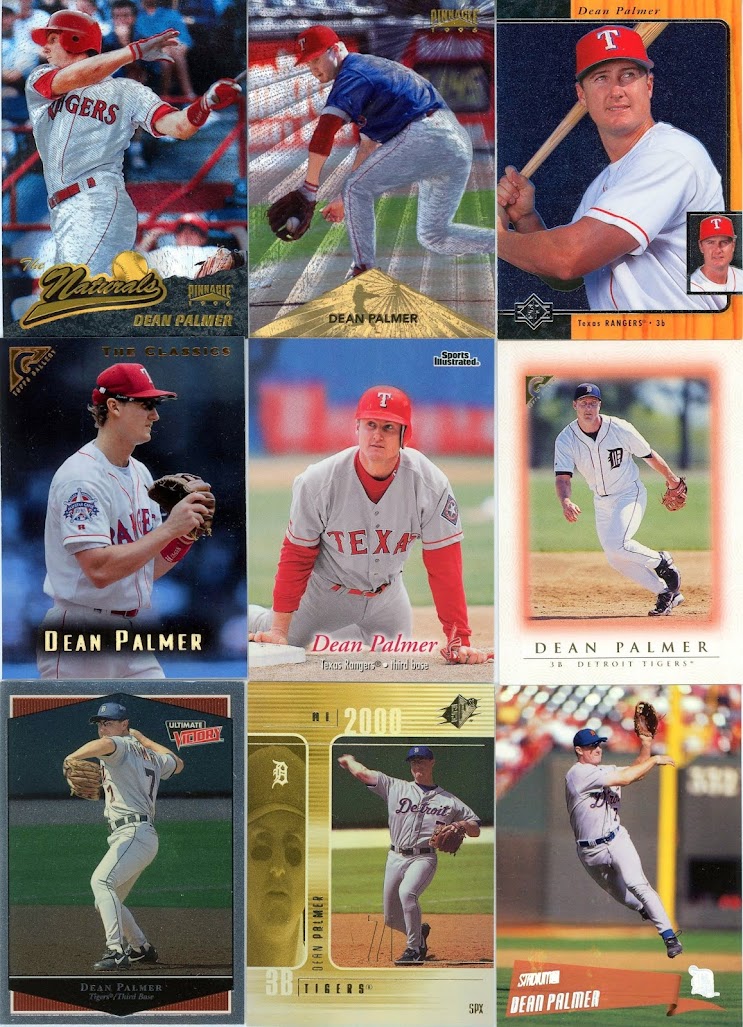 Dean-o is the first of three guys for whom I added enough cards to their PCs to pick nine of my favorites for a regular scan and then show off the rest in a photo. Palmer was the big winner of this package as I made a nice dent in his checklist to the tune of around 55 cards, getting him over the 200-mark. My highlights here include a pair of Pinnacle Starburst parallels, '96 SP, two different Topps Gallery base, Fleer's Sports Illustrated, UD's Ultimate Victory and SPx, and an awesome Stadium Club design with the huge bonus of a great photo. Lots of beauties for sure. 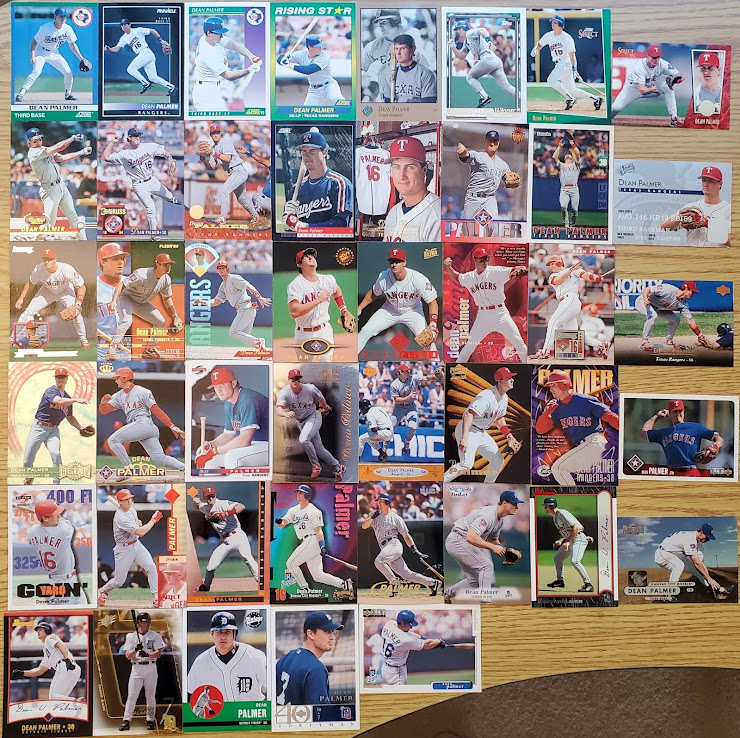 And to those I added this huge haul. These pretty much span Palmer's entire career, hailing from 1991-2003, and there's plenty of nice ones that could have made the cut above. That's no surprise since in my eyes the hobby will never reproduce the glory of 90s designs. No problem--there's still lots for me to collect from that decade! And still plenty of Palmer cards too, though he'll be one of a few players getting huge boosts to their PCs from Sportlots shortly. 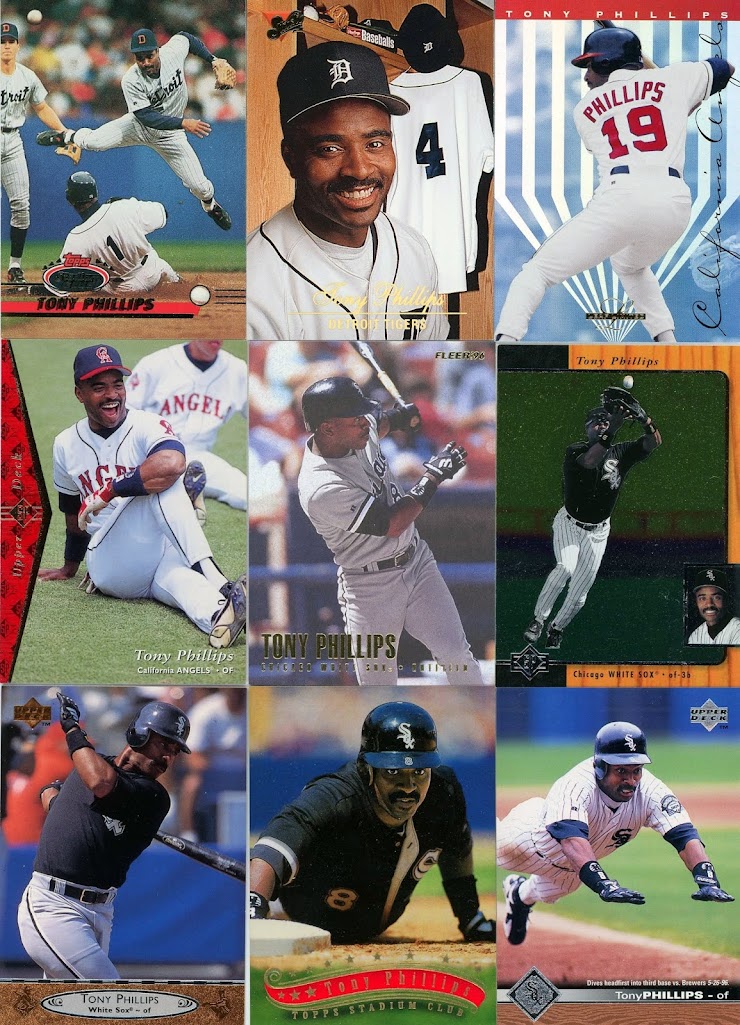 The criminally underappreciated Tony Phillips is next, though I sure appreciated these nine out of his pile. This group actually only captures three of the five times with whom he appears on cards I purchased, but you'll see the other two shortly. I chose a few of these because I liked the brand or the design, but there's some excellent photos to enjoy as well. Look at him catching air during a twin-killing in a throwback uni up top, getting captured smiling in a portrait and warming up, or flying into a base. His positional versatility is on full display here as well. 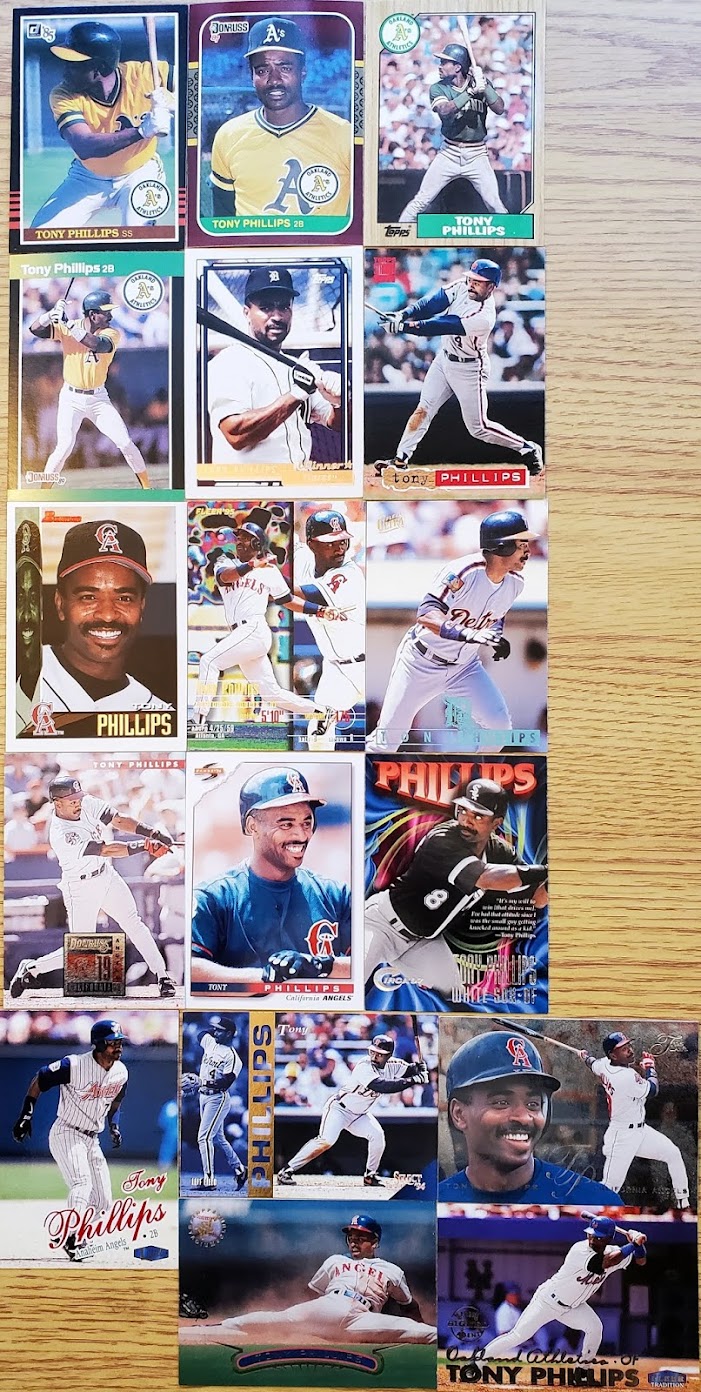 And the rest, with some 80s thrown in for good measure. The first few and last cards bookending the rest show Tony with two of his other clubs, the A's (with whom I associate him the most besides the Tigers) and the Mets. You can see a few different positions listed again, as well as the fact that Tony was a switch hitter. I now own more than 150 of his cards with a nice bunch coming from Sportlots, and there's a good change he'll overcome Curtis Granderson in my collection before long--Too Many Tonys! 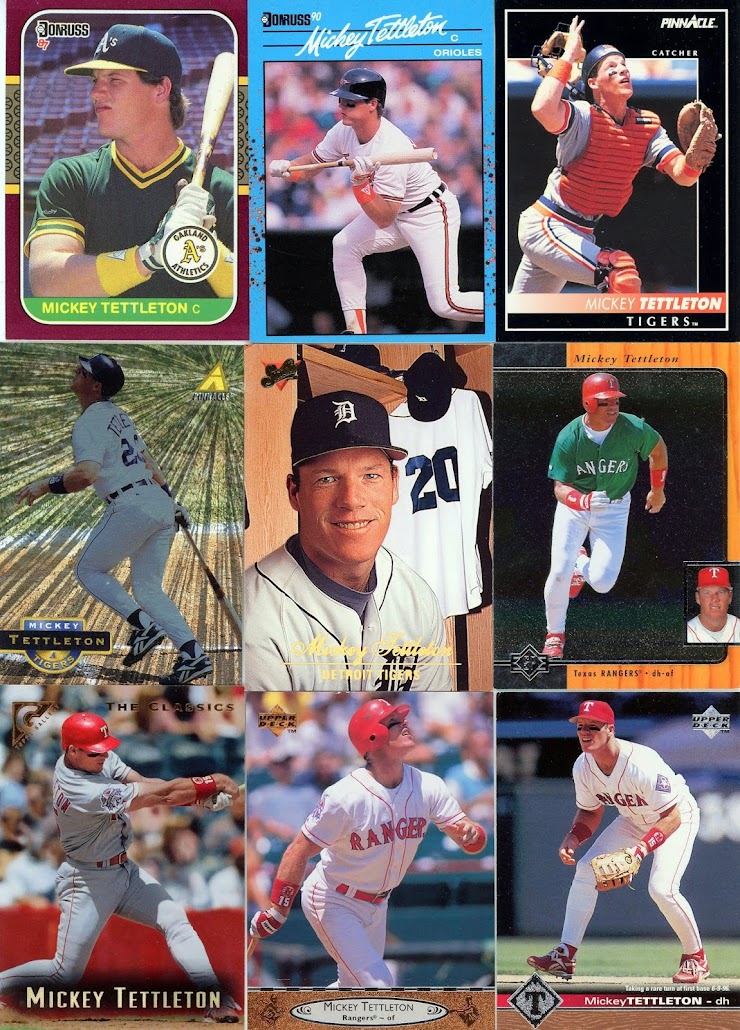 And the last PC guy with his own scans today is old Fruit Loops. The top three photos are all great for different reasons, and really, how often did you see Mick bunting? I love Dufex cards like Pinnacle's '94 Museum Collection (though nothing beats '95). Gallery and UD flagship ('96 and 96-97) had some great years during the decade. '97 is probably my favorite set that I don't own, and I love the game-dated photos. 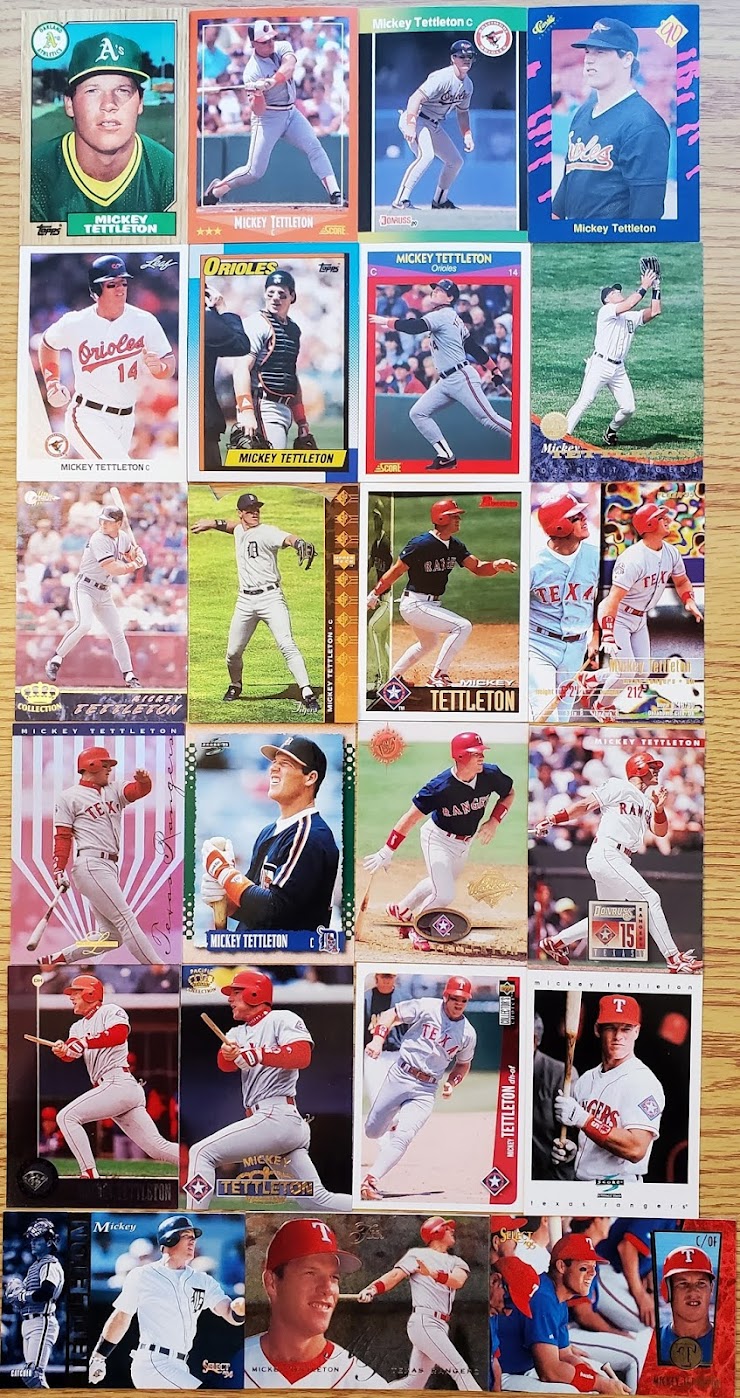 Tettleton's haul was less than Palmer's--closer to 35--but it was still very productive, jumping him over the 150 mark as well. There's just a few Tigers cards here but that's ok since there's plenty of 90s goodness for me. 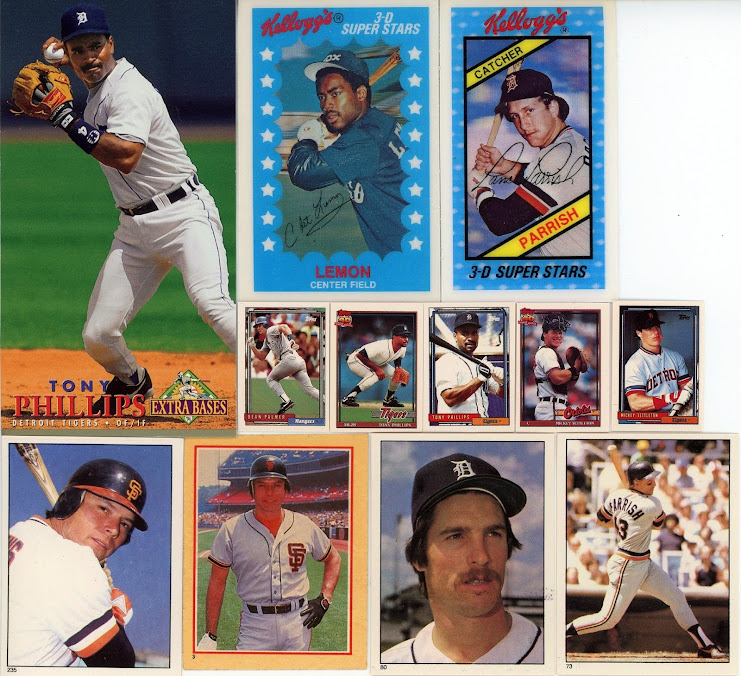 We can't call it a day until we get to this last image, though, filled with odd sized items and stickers. I collect Phillips' stuff big and small, like the storage-challenged Fleer Extra Bases cards and Topps Minis (which also star Palmer and Tettleton). You saw a 1981 Kellogg's Lemon earlier and it was joined by this '82 version, which is a bit smaller in both dimensions. Next to him is a Parrish from the even slimmer '80 set, which might be my favorite, though I'd like to see more sets for comparison. Evans' early 80s cards are joined by Topps (1981) and Fleer (1984) Stickers from the same era, and fellow '84 champs Morris and Parrish hail from the same '81 Topps Sticker product.
As with Baseballcardstore.ca I definitely feel like I got my money's worth here while stocking up on some new items to bolster some of the PCs I'm most interested in lately, so I'm very happy with this purchase and will surely go back to the well at some point.
Speaking of new pickups, the aforementioned Sportlots haul may be the subject of my next post, pending delivery of that (and any surprise deliveries) so stay tuned. Until then, happy Easter and MLB season!
Posted by Dennis at 6:33 PM