2021 Sportlots purchases part 2: big and small we have them all!

Previously: Quick summary and set wants
Today's post is filled with all kinds of crazy oddball stuff: minis, oversized cards, discs, coins, and even a sticker dump from Topps and Panini that has nothing to do with Henry Owens. After initially opting against picking up many of these items I decided I'd enjoy filling in some of the odder parts of my player collection checklists with the zany offerings you see below. And better yet, I realized it would be a blast posting them all at once instead of going player by player, so you can get a look at great examples of unorthodox collectables from the past 40 years--especially the earlier half of that run.
I'm curious to see how many of you collected some of this stuff in your younger days, and to see what everyone's favorite type of item in this post is, and why.
And now, on to the gallery of weirdness!
Stickers (and stamps):
Stickers were and are a great way to get kids into collecting. My brother and I enjoyed working on filling in our Panini albums for a good chunk of their run, but we never really collected the Topps versions, maybe because they weren't as available as Panini's. Either way, you'll find both brands here (and O-Pee-Chee), and a couple stamps as well. I don't remember if I've mentioned this before, but regardless of whether or not I have a player's sticker stuck in a Panini album, I've been buying them intact for player-collecting purposes.

Jim Abbott: 1990 Topps (with Vince Coleman, and Darryl Strawberry on the back); 1991 Panini, 1994 Panini
That '91 Panini design was definitely an outlier for the product! 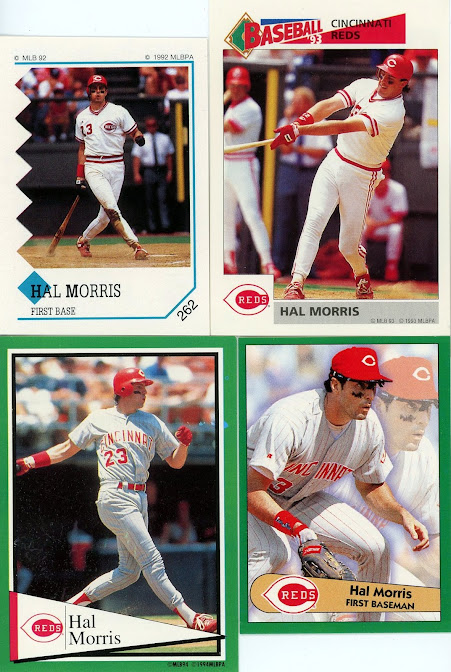 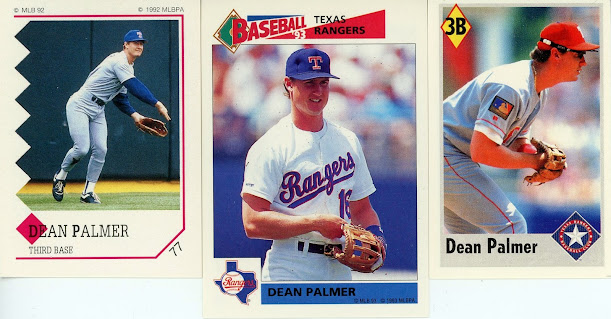 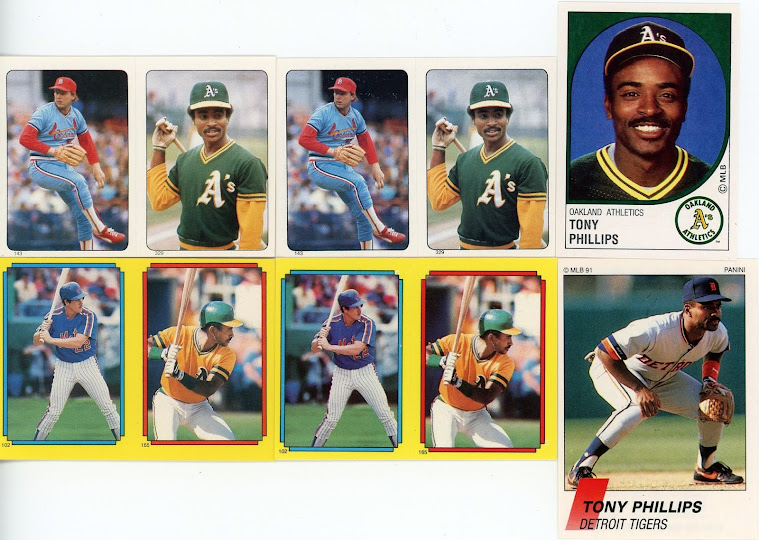 Tony Phillips: 1985 O-Pee Chee and Topps (with Dave LaPoint); 1988 Panini; 1988 O-Pee-Chee and Topps (with Kevin McReynolds; Ryne Sandberg on the OPC back, Jeffrey Leonard on the Topps back); 1991 Panini French
Multiplayer stickers were a great idea, especially when OPC and Topps included a player on the back that made these even more collectable. The '88 Panini design is definitely one of the best in my opinion. 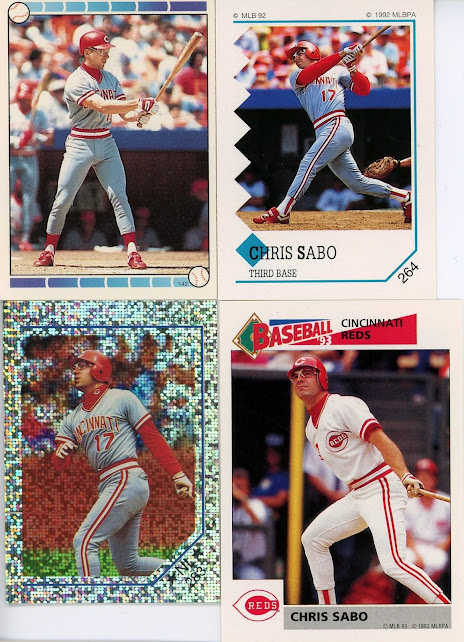 Chris Sabo: 1989 O-Pee Chee (with Ozzie Smith on the back); 1992 Panini x2; 1993 Panini
If you were a kid ripping Panini sticker packs back then maybe you'll remember the excitement of pulling one of those super shiny versions used to highlight team and league logos and the All-Stars. Years before X-Fractors were a thing, these looked totally badass!

Lary Sorensen: 1984 O-Pee-Chee (with Larry Gura)
Geoff Zahn: 1983 and 1985 O-Pee-Chee
I scanned these together because why not? You'll see a number more from the early and mid-80s in the next couple scans. I think it's pretty cool how OPC had you peel the '85 version out of the rest of the image, which would have made them more fun to add to whatever scene you were imagining. 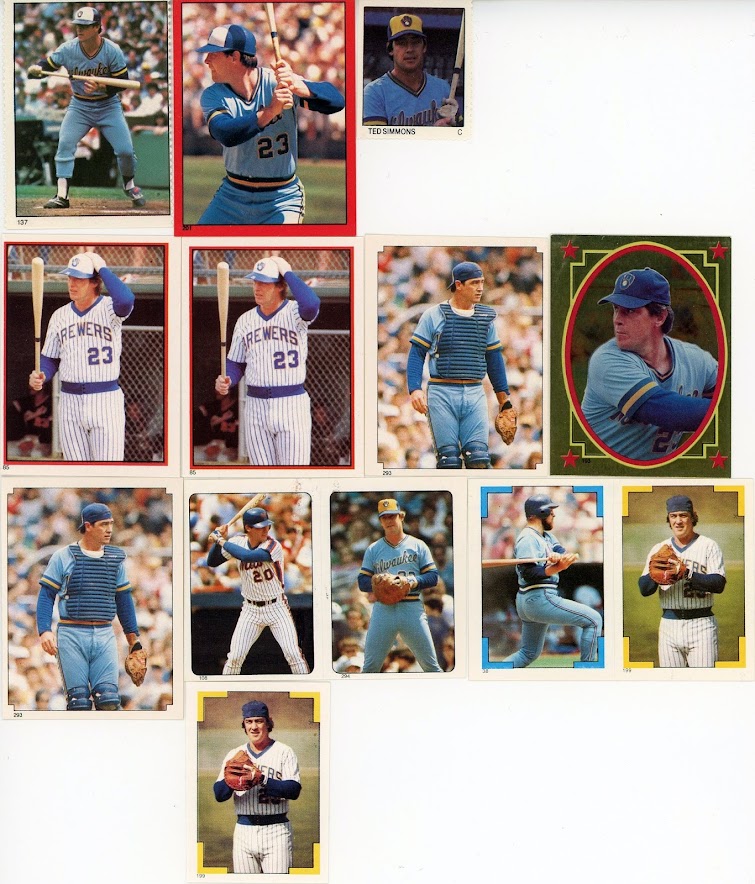 Ted Simmons: 1982 Fleer Stamps; 1982 Topps; 1983 Fleer Stamps; 1983 O-Pee Chee and Topps; 1984 O-Pee-Chee; 1984 Topps x2; 1985 Topps (with Mike Fitzgerald); 1986 O-Pee Chee (with Ken Oberkfell); 1986 Topps (Simmons half only)
Lots of fun examples here! I've got just a few stamps (I believe all are from Fleer) so it's cool to add the odd one here and there. The '86 Topps here is one of six or so where one of the sellers (or whomever they got the stickers from) cut some two-player stickers in half. That wasn't clear in the way they were listed on Sportlots but it's not a big deal to me. I may try to replace them at some point but more likely I'll just decide I don't care. It's a bit more annoying when there's another player on the back, but all I'm really interested in is the player I collect! Anyway, like the shiny Panini sticker above I also chased after other "premium" versions like the foil you see here from 1984. 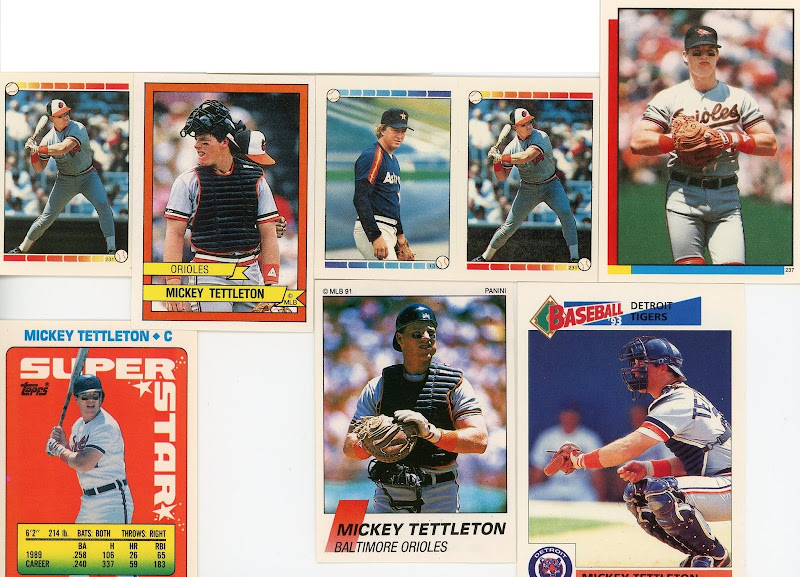 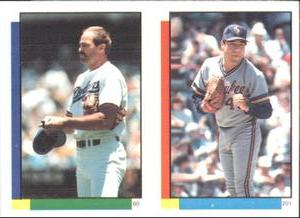 (snagged from TCDB because I was too lazy to scan mine)
No need to grab an extra copy of either since I was able to kill two birds with one stone here. 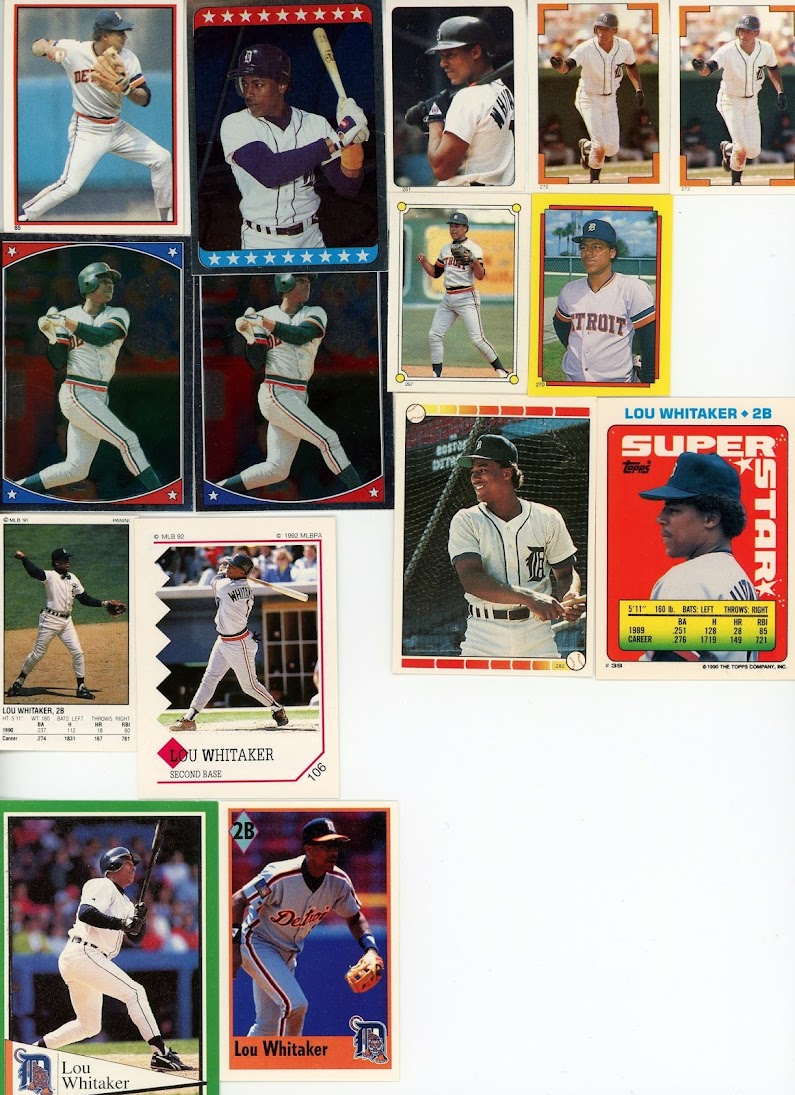 Lou Whitaker: 1983 O-Pee-Chee; 1985 Topps x2 (Whitaker half only on second sticker); 1986 O-Pee-Chee and Topps (Whitaker half only on both); 1987 O-Pee-Chee; 1987 Topps x2 (Whitaker half only on second sticker); 1988 O-Pee-Chee (Whitaker half only, Paul Molitor on the back); 1989 O-Pee-Chee (with Doc Gooden on the back); 1990 Topps Superstar Backs (with Bob Walk and Tom Candiotti on the front); 1991, 1992, 1994, and 1995 Panini
Well damn, that's a good way to beef up my collection of Sweet Lou stuff when most of what I'm left chasing is relatively rare! It was nice gaining three more foils among this huge variety, plus I didn't miss out on anyone I cared about on the five that were cut up.
Coins (and a pin):
Topps tried the coin thing back in 1964 and '71 and then went back to the well from 1987-90. Just like stamps the format makes them very collectable so they were a natural fit when it came to baseball collecting. It seems like pins were less common but they're so oddball that they're pretty much off my radar except for the odd examples in my collection. 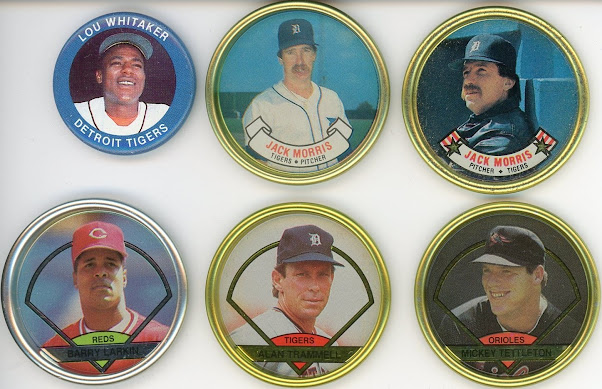 Sweet Lou represents my fourth 1984 Fun Foods pin (Lance Parrish, Kirk Gibson, Alan Trammell), and they're kind of fun to collect when you find them for cheap like I did here. Morris' coins were made by Topps in 1987 and '88, with the latter being my only example from that year's version. Lastly, Larkin, Tram, and Tettleton are all from the 1990 set, though I'm not sure why Barry's has more of a silver look to it while the others are gold. 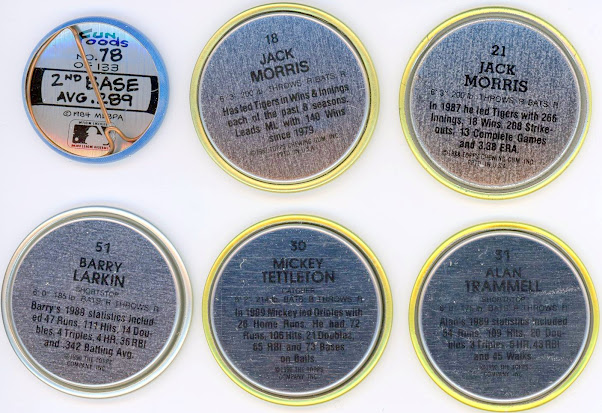 And here's the backs. I like the way the pin uses a comic book-like font.
Minis, micros, and more!:
If you only like your cards to be 2.5x3.5, look away now! Most of this stuff has dimensions smaller than that, making them a pain to store but interesting to look at. Also, it's easier to fit lots more of them on a scanner. 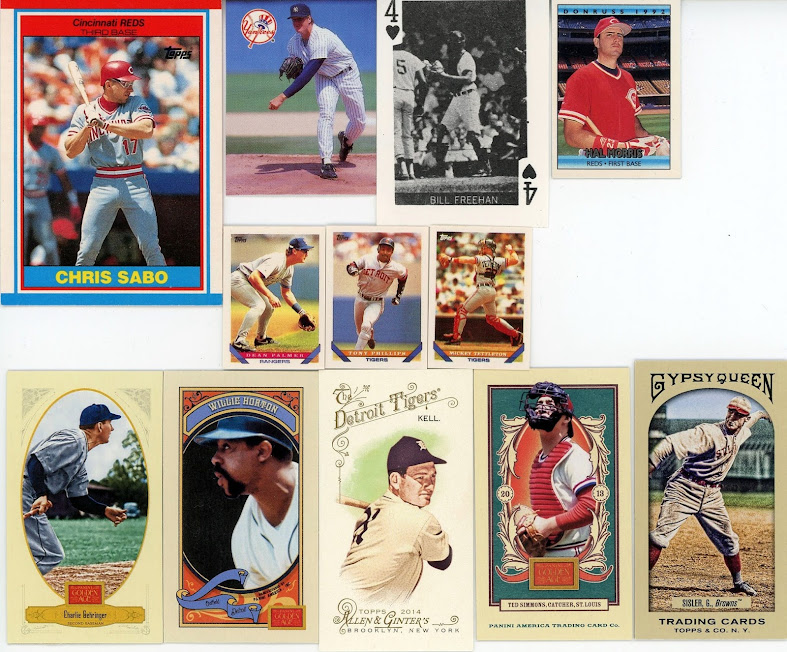 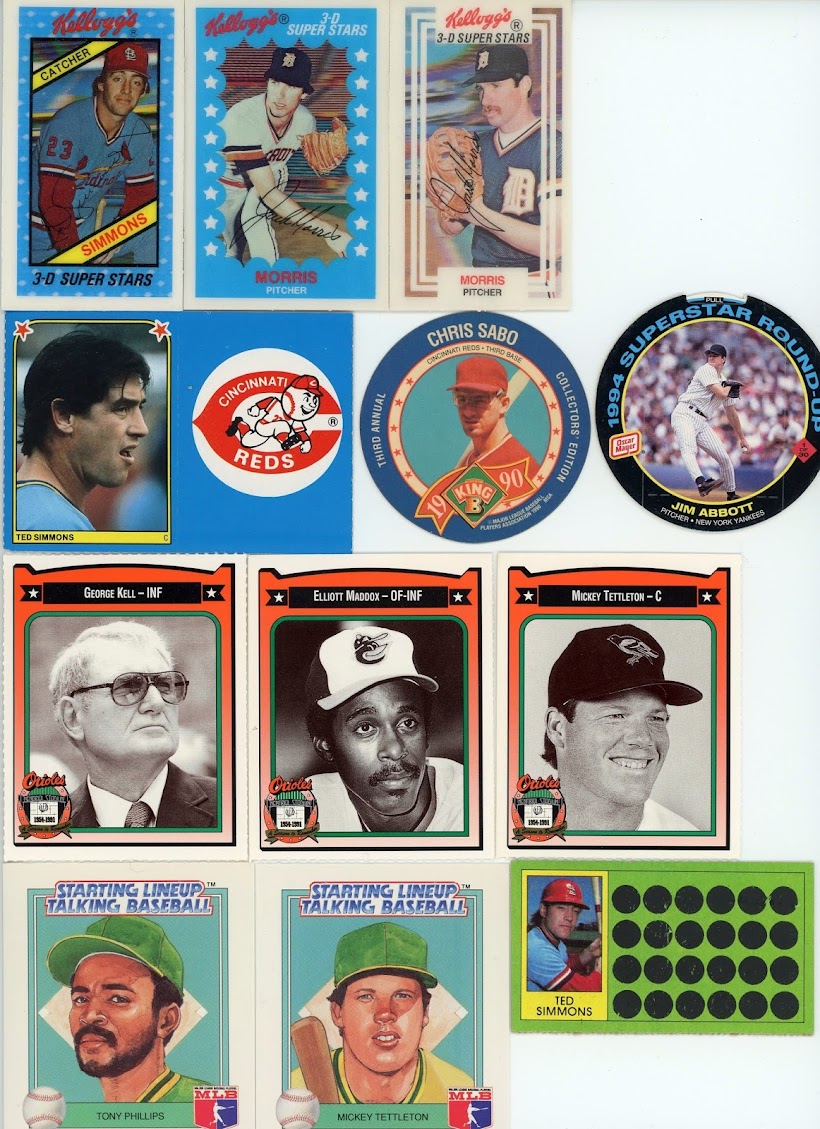 Up top we have Chris Sabo on an '89 Topps UK Mini, a reasonably well known set. Humpty Dumpty appears to be (or have been) a Canadian snack food brand, and in 1993 they offered diminutive cards like the Abbott you see above. It came shrink-wrapped but I was happy to open it up now that it was safe from any greasy (a.k.a. delicious) food. Freehan appears in a playing card-type set made in 1969 by Globe Imports, and the black and white "card" is printed on fairly thin paper stock, making me think I could pretty easily print up a whole set of those if I wanted! Hal Morris finishes up the top row with a 1992 Donruss Cracker Jack mini that could be found in boxes of that snack. Those were made a year after the snack maker teamed up with Topps to do the same.
Then we go even smaller with a trio of '93 Topps Micros for three players whose collections I focused on bigtime in this purchase. They're followed by more traditional minis from the last decade out of Panini's Golden Age and Topps' A&G and GQ. I'm happy to note that this isn't the last you'll see of Horton and Kell in this series.
I've had some fun loading up on those cool Kellogg's cards from the 70s and 80s that so many people are into, and for good reason! Here you see a Simmons from 1980 along with Morris versions from 1982 and '83. What a consistently excellent food issue!
I probably could have included Ted Simmons' 1983 Fleer Star Sticker with the group above but as it was still joined to the same piece as the Reds logo, which made it larger, I thought it was a good fit here. A 1990 King B disk of Chris Sabo and '94 Oscar Mayer Round-Up of Jim Abbott seemed to make sense in this group as well. Maybe I'll take the plunge and "pull" on the Abbott disc's tab if I get another one I don't mind opening up and potentially damaging.
Most of the rest of the group here is shorter and wider than your typical trading card. The first three are from a Crown/Coke Orioles team set that reminds me a bit of the Target Dodgers set from the same era. This one is made up of 501 perforated cards sorted alphabetically, and I scored my first three in Tigers great Kell, former Wolverine Maddox, and PC guy Tettleton. Below them are Tettleton and Phillips from the slightly smaller (physically, but not set size) 1988 Starting Lineup Talking Baseball electronic game (which you can read a lot more about here). And breaking up the combo here is 1981 Topps Scratchoffs of Ted Simmons that will remain unscratched in my collection.
Oversized oddballs:
These can present a storage challenge of their own but sometimes bigger really is better when it means more room for creativity! 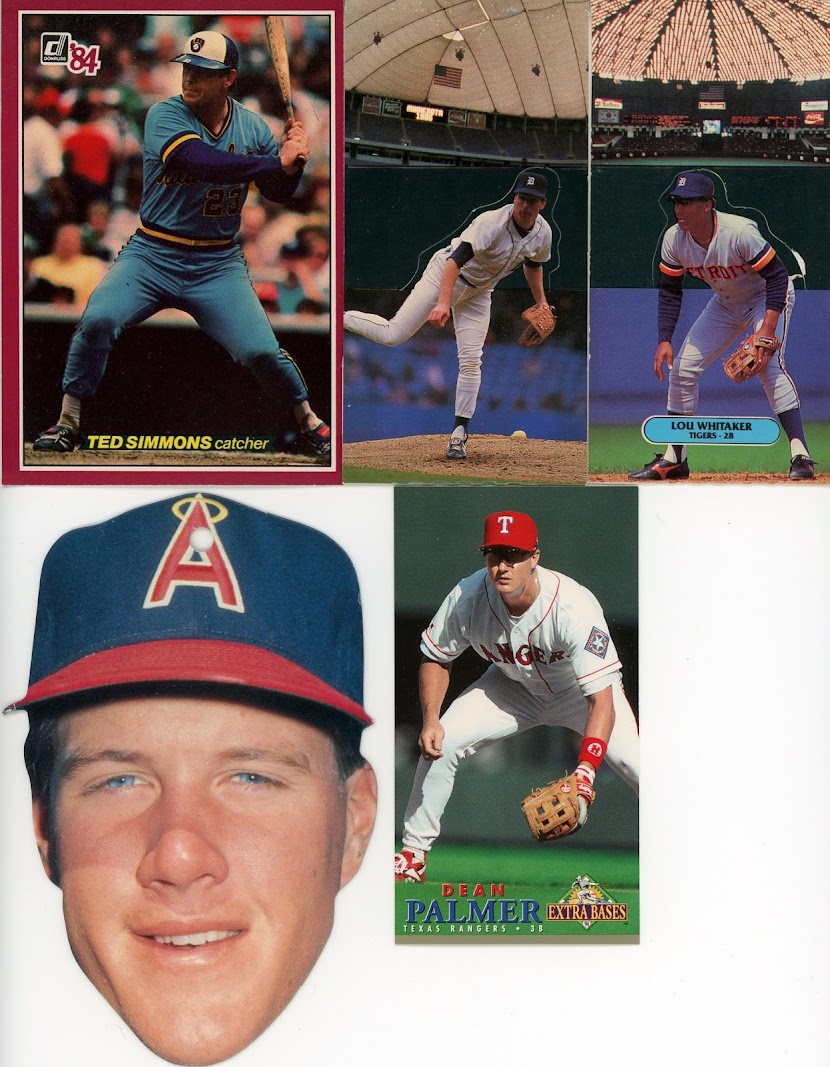 We'll end things today with the biggest stuff because that's what I scanned last. I'm pretty sure Donruss' Action All-Stars jumbos like Simmons' from 1984 above are pretty well known at this point. Maybe a bit less known are the All-Star-related Pop-Ups, with examples of Morris (1986) and Whitaker (1987) seen in this scan. I didn't realize that two Midsummer Classics in a row were held in dome: Minnesota in '85 and the Astrodome the following year. The stadiums can be seen in each card's background plus the home team is mentioned on the back.
Today's largest item by far is a 1990 Topps Heads Up of Jim Abbott. These originally came with suction cups so you could stick them up on your wall or elsewhere, but I don't think the disembodied head thing proved too popular.
And we'll close out tonight's post with a more mainstream oversized item: Dean Palmer's entry from Fleer's 1994 Extra Bases set. I've snagged a number of these now and have resorted to keeping them, along with lots of my other larger card items, in a graded card box, where they fit quite nicely without having to worry that I'll accidentally bend and crease them in a standard monster box. That's where everything else in this scan will probably reside as well.
That was definitely a fun bunch of weird stuff to look through and post about. While I'm working on getting everything put away safely I hope at least a few of you reading this will let me know which of this stuff you collected and/or what you liked/hated.
And I'll be back soon-ish with another stack of Sportlots stuff from this order once I figure out what I feel like scanning and writing about!
Posted by Dennis at 9:33 PM