I'm back with a show recap post despite having two blogger trade packages to cover. I usually try to prioritize those but I had this post ready first and it should be easier to just finish it up and then get to the trades.

Anyway, I had another great time, almost two hours worth this time, I believe, digging through boxes at the monthly show a couple Saturdays ago. For whatever reason despite it being early afternoon on a Saturday the place was relatively dead so I had plenty of breathing space and time to look stuff over. I even chatted a bit with a couple other folks going through the quarter boxes, and that was nice.

The final damage this time was 100 quarter cards, 40 dollars, and three that were $2 each. That comes out to $71 and the dealer knocked that down to $60 because he's a dude and seems to like charging me that amount. You know I'll be back next month!

I made a few nice finds in the dollar box but really enjoyed the quarters this time. As usual I didn't get through all of those boxes because there's a ton and my patience runs out before long.

First, here's a quick look at the non-specific trade bait I grabbed:

The Walker, Davis, and Jones have already headed out into TCDB deals, but would you believe these were all quarter cards? There were lots more numbered football inserts I would have picked up if they were dimes. Anyway, I thought those three were amazing for the price--'97 Circa's fun felted Fast Track and a couple versions of Leaf R&S Slideshows. Of the rest the McNown is notable for being #d /5000. Those are available here or on TCDB. 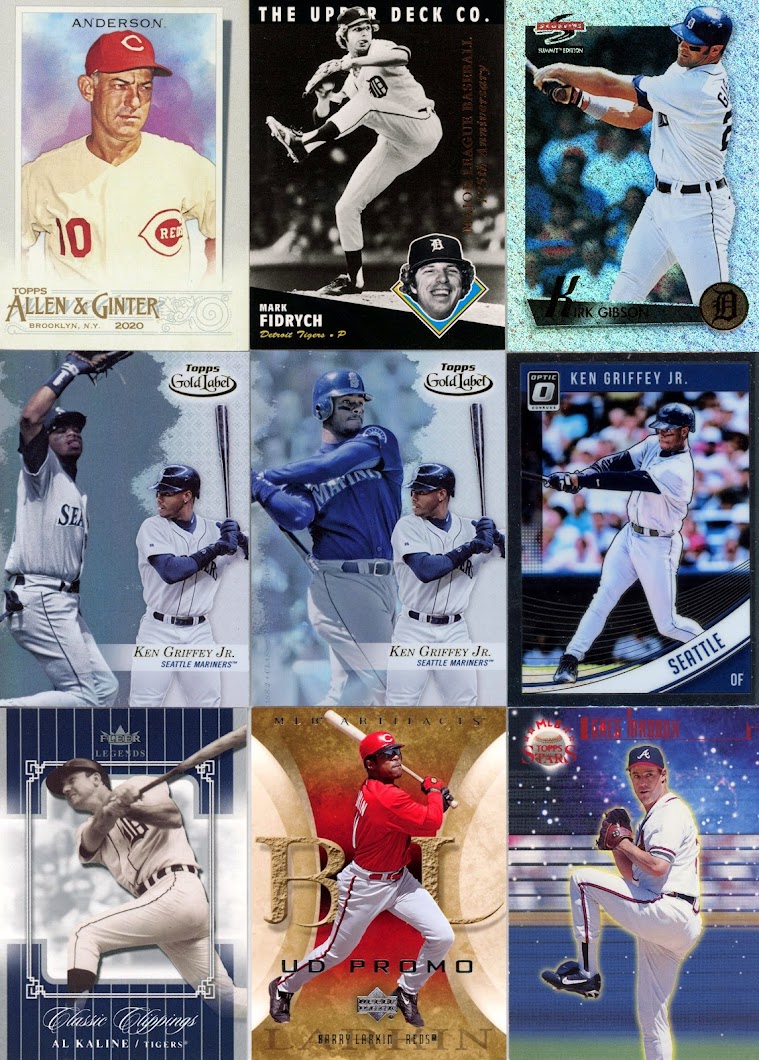 Next you'll get a look at the stuff I picked up for myself, all of which came out of the quarter and dollar boxes. The Gibby surprised me because it wasn't on a list (collection or wantlist) for me on TCDB, making me realize I needed to update it! That's a '95 Summit Nth Degree parallel, a rare card made during his career that I needed. It's always nice landing more Griffeys. That Kaline is beautiful, a 2005 Fleer Classic Clippings parallel called Final Edition. It's not numbered but its reflective foil makes it a beaut. Larkin promo! A rare Barry card I own that Chris doesn't. And I love me some numbered cards of my big PC guys like Maddux, with that Topps Stars above #d /9799. 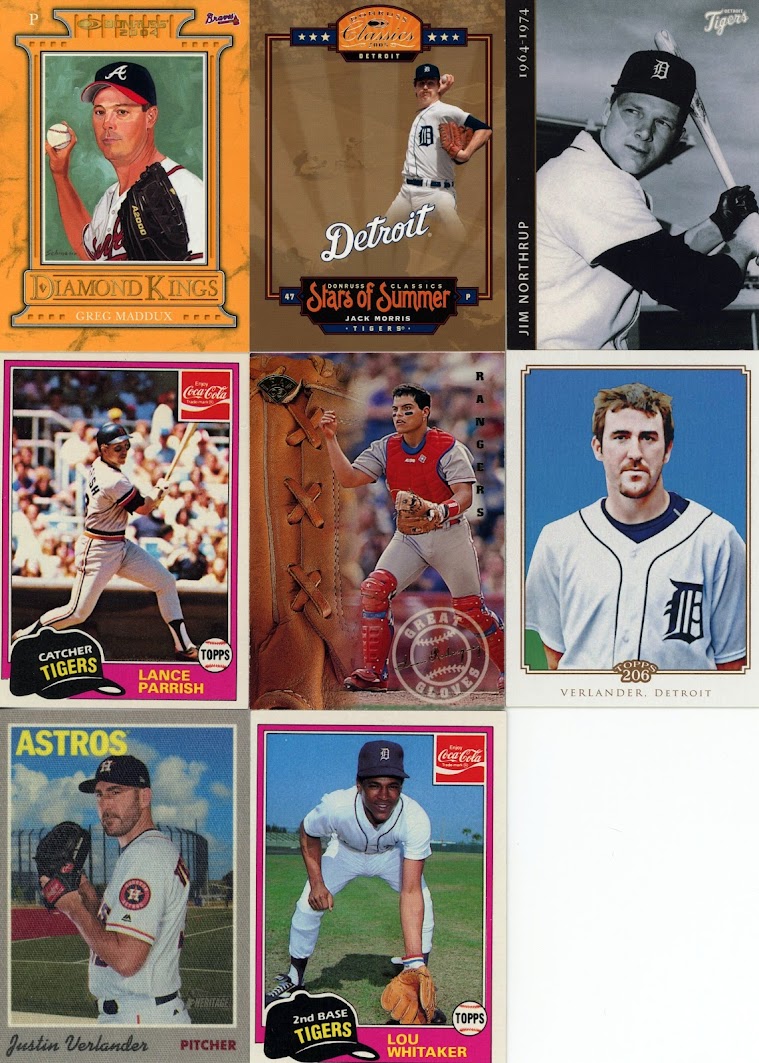 And even more baseball. $1 was plenty cheap for Mad Dog's '04 Donruss DK insert (/2500). Fellow HOF pitcher Jack Morris also appears on a numbered Donruss insert, 2005 Classics' Stars of Summer (/1000). Northrup's '99 Ball Park Franks card is from a set entirely new to me and now I'd love to find the other nine. Parrish and "Sweet" Lou both came out of the '81 Topps Coke team set for $1 apiece and I was glad to track down the latter on the day his number was retired at Comerica Park (I didn't go because the team's awful and the stadium experience sucks). Two many Verlanders is always a good number, and my Topps-hating ass still loves stuff like his 2019 Heritage Cloth Sticker. 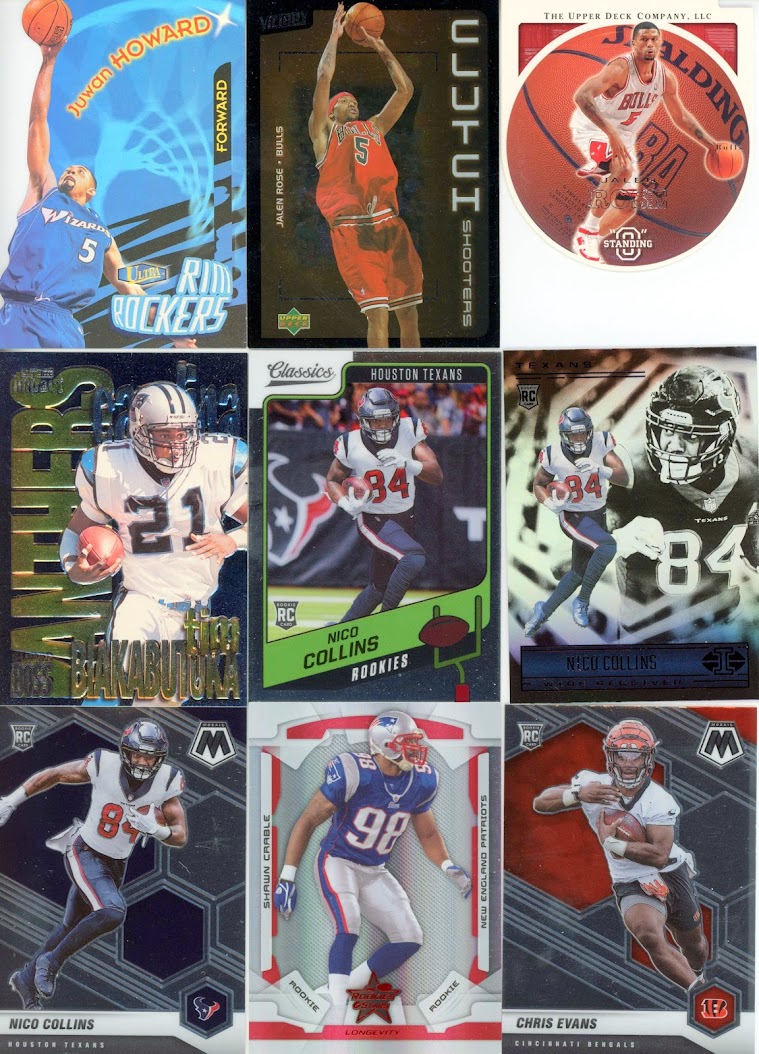 On the basketball side of things I felt I spent $0.75 well, coming up with die-cuts of coach Juwan Howard and fellow Fab-Fiver Jalen Rose, plus another of the latter. I'm pretty sure everything you see from football here was the same price. Touchdown Timmy sure ran like a Boss. Three new Nicos yielded two new RCs. Crable's 2008 Leaf R&S parallel (/249) is from the earlier Donruss/Leaf/Playoff age that was vastly superior to the current Panini mess, and they know how to make inserts and parallels back then (get off my lawn!). Bengals RB Evans joins Collins with a RC out of last year's Mozaic. 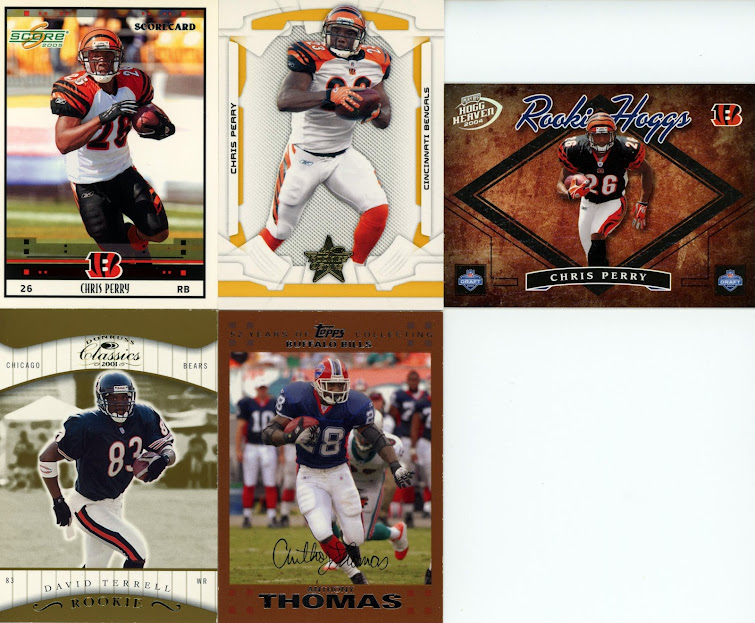 Finishing up with football here are five more numbered inserts of three former stars. Perry's are from 2005 Score, 2007 Rookies & Stars, and 2004 Playoff Hogg Heaven, and go for 599, 349, and 750 copies each. Terrell and Thomas are paired up like I like to see them, with the former on a much-needed 2001 Donruss Classics RC (#s /475) and the latter in his sunset season with the Bills (2007 Topps Copper /2007).
So in summary, as usual, great cards for me and a few for some of you too, possibly going out in trade packages soon.
Next time you can look forward to a blogger trade package, and another after that as well, after which it's pretty likely I'll be doing a few more TCDB trade roundups. Until the next show!
Posted by Dennis at 6:13 PM