If there's one person I can count on to send me new stuff I didn't already have (and fortunately a lot of you are great at that!) it's Matt of Sport Card Collectors (and his various umbrella of great blogs). Matt usually hits me up with a fun PWE a few times a year, and in rare cases he'll even triple or quadruple the loot and send me a bubble mailer.
That's exactly what he did very recently, and now I get to show off the fruits of his generosity, this cool mix of Tigers, PCs, and Michigan Football: 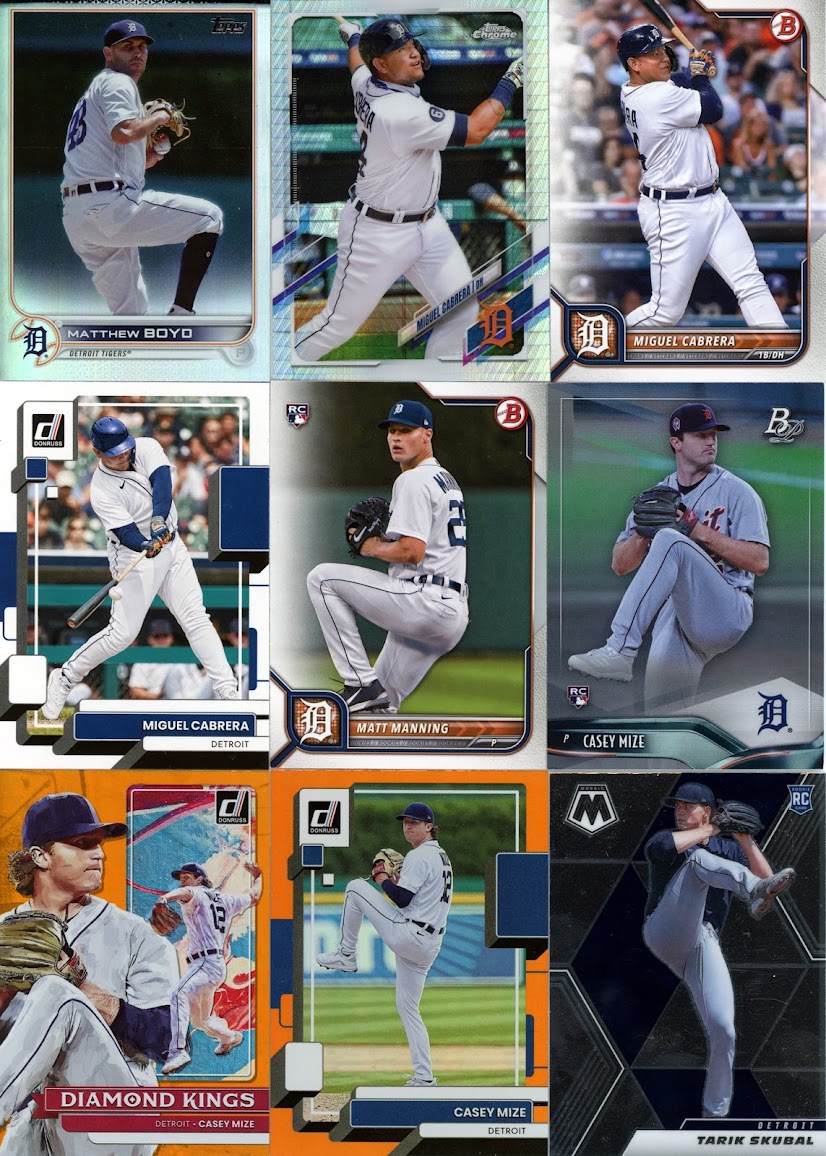 There were 10 Tigers cards but since that's one more than nine you'll have to catch the last one in the next scan. These are all '21 and '22 cards so it's no surprise I didn't have any of them, and because they're so new almost all of these guys are still on the team. John's guy Matt Boyd is the only exception, and the injured Giant who hasn't been healthy enough to start yet this year is seen on this year's Topps Rainbow Foil parallel. Miggy's up next with a '21 Chrome Prism Refractor plus base from this year's Bowman and Donruss. He just passed Rod Carew and has Rickey Henderson, Craig Biggio, and Ichiro in his crosshairs this season, which would place him in the top 25. It's very cool to be able to see that kind of history being made.
And then we have a trio of pitchers that could be the future of the rotation if they could all just be healthy and effective at once! Manning, who may still return this year, joins Cabrera from the '22 Bowman set (my first examples of those). And my Mize collection continues to grow at a time when he won't be pitching again for quite a while. Besides his '21 Bowman Platinum RC Matt sent both of Casey's Holo Orange parallels from '22 Donruss, including his Diamond Kings subset appearance. Skubal, who'll be starting tonight, is the only one who's active, and the card you see above his is '21 Panini Mozaic RC, my 11th card of the talented lefty. 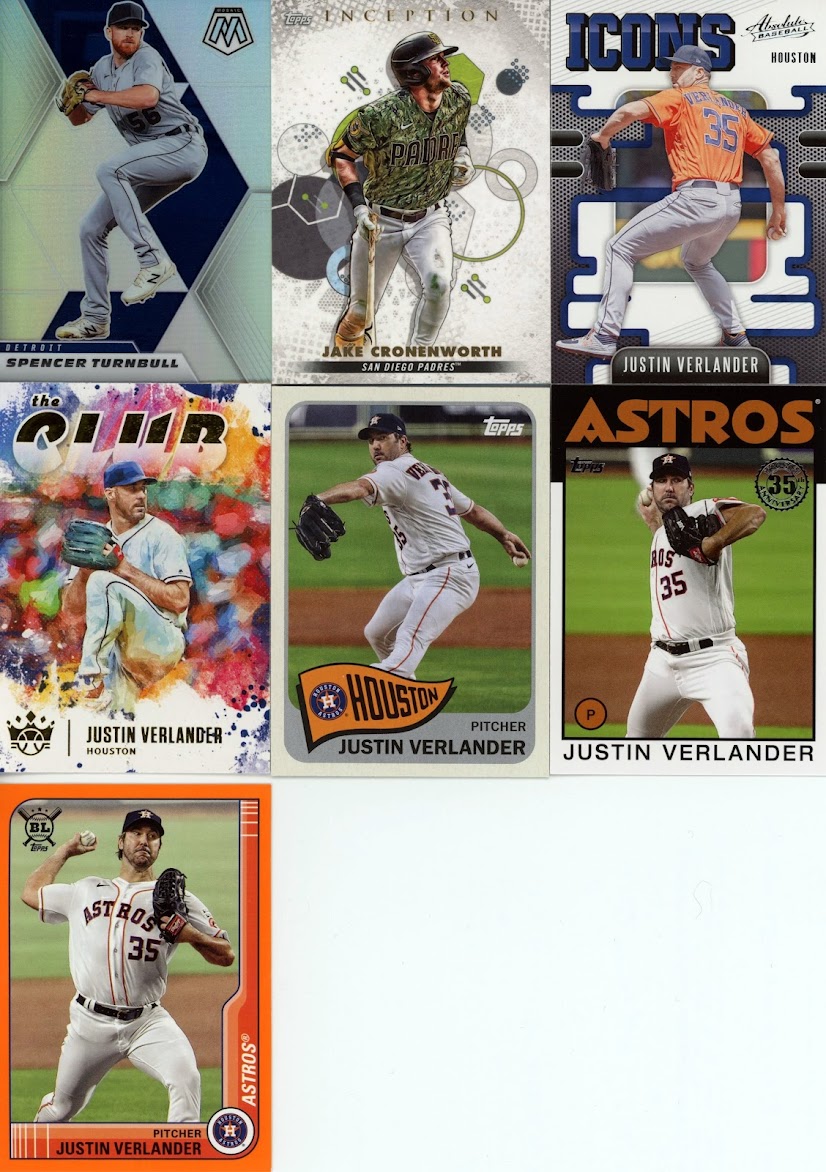 Turnbull (same set, Prizm parallel) is another talented pitcher, but I'm less excited to see him here since his asinine Instagram comments about the Supreme Court's inarguably harmful decision to overturn Roe.

Moving on is a new #CroneZone card headed to Jake's collection, his super thick 2022 Topps Inception base. Jake's been a bit streaky but has had a very nice June after a slow start. And the rest here combine to make up too many Verlanders! Card #1 is from 2021 Absolute's Icons insert, and I'd say JV has done more than enough in his career to earn that label. The '21 Diamond Kings "The Club" insert looks a bit nicer in comparison. Then from Topps we have throwbacks to the designs of 1965 and 1986, plus an Orange parallel from last year's Big League. My current Verlander count (besides "too many") is 516 and continuing to climb! 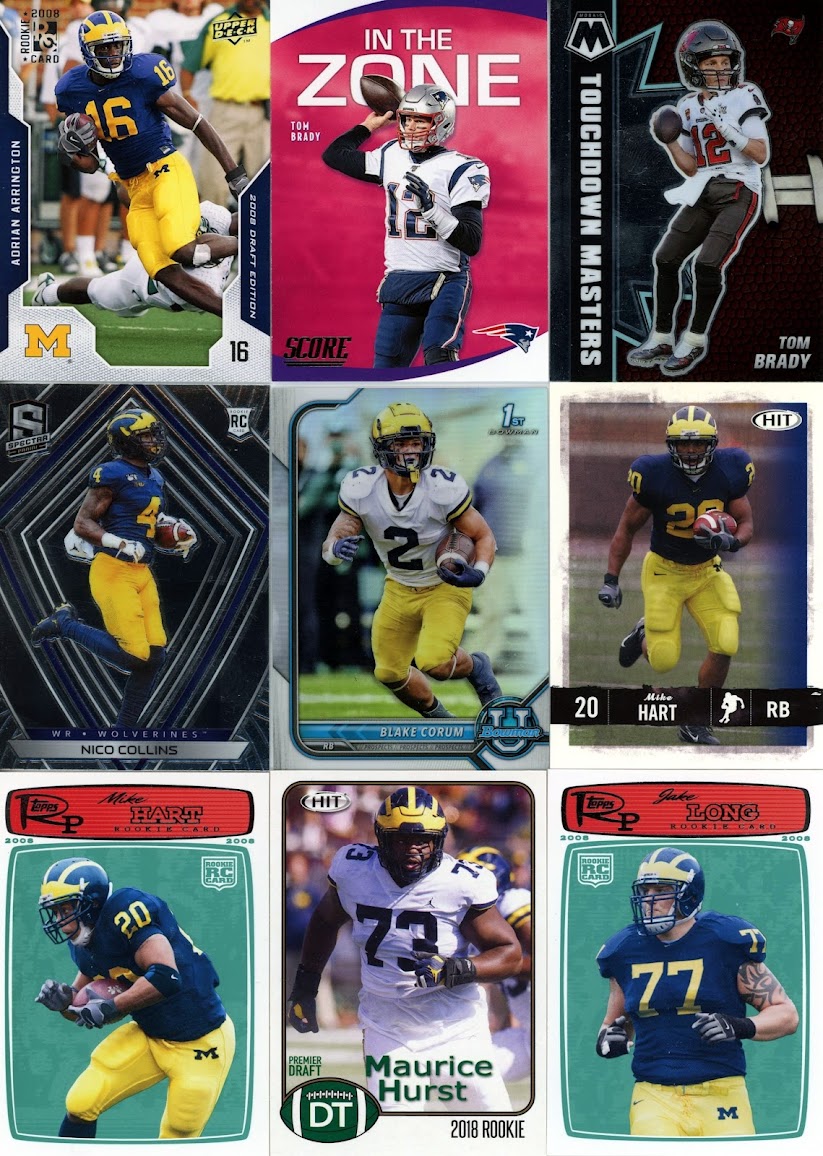 I mentioned Michigan Football stuff too and was thrilled to end up with two scans worth. Almost everything features college unis which is always my preference when possible, so huge bonus there. This group includes three guys from my favorite UM draft class of 2008: Arrington, Hart, and Long. Two inserts of the GOAT Tom Brady were great non-college inclusions, including TB12 in big head mode on the Mosaic card. I hope the talented Collins ('21 Chronicles Spectra) gets out of an awful QB situation in Houston and gets to shine. Corum's card from 2022 Bowman University (a Topps product I like?!) is one of my favorites (despite the mandatory airbrushing) because it gives me a jump-start to his collection before he's even drafted. His 2021 season has me absolutely juiced to see what he can do in his second year. And former big man DT Mo Hurst rounds out this group with his 2018 SAGE HIT base that looks a lot better than some of their recent designs. 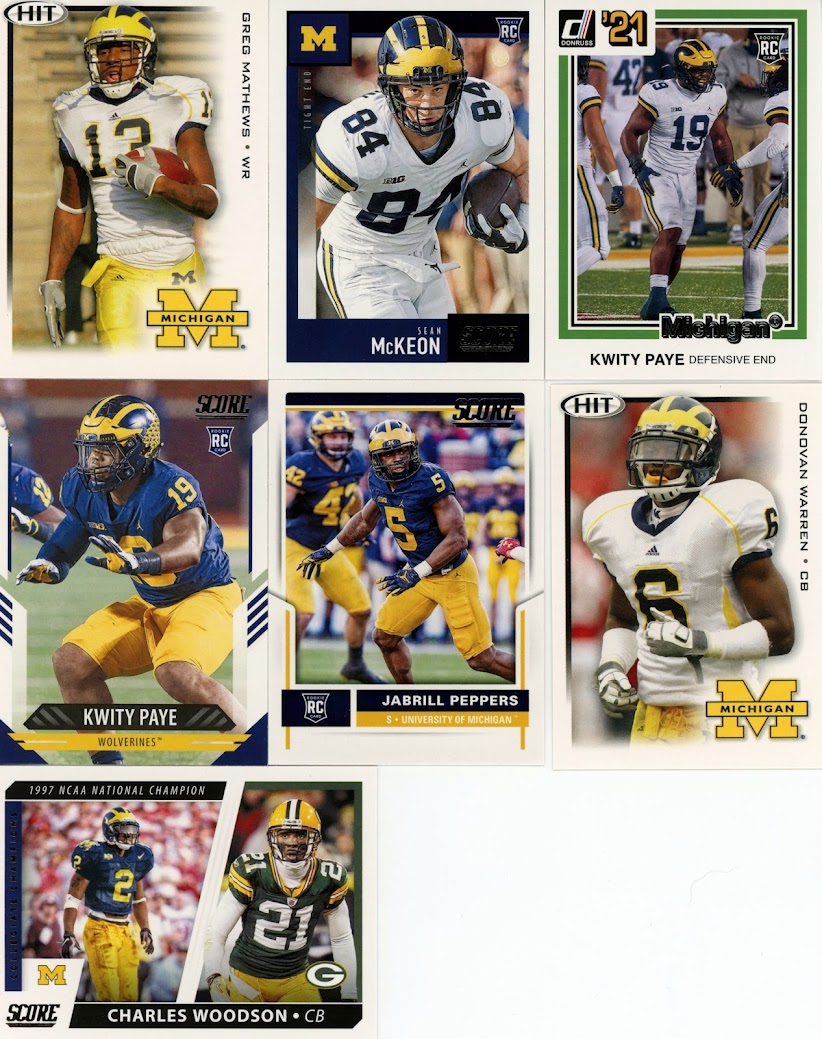 And the last scan has seven cards, all with college action (plus a bonus NFL shot). Mathews and Warren join Hurst out of past SAGE HIT products and I remember their careers at Michigan quite well. Recent-ish draftees McKeon, Paye, and Peppers all appear on some nice base Score designs that are accented quite well with the team's colors, and Paye gets a bonus '21 Chronicles Draft appearance too! And lastly we have the GOAT on the other side of the ball, DB Charles Woodson. Also out of Score this is his cameo in the '21 Score Collegiate Champions insert, which lauds the fact that he won titles in college ('97) and the NFL (2010), not to mention the Heisman. Quite the trio of accomplishments!
Matt, thanks for going out of your way to send me this bubble mailer filled with PC goodness! As usual I'm looking forward to seeing what I can find for you at this weekend's show, and hopefully you won't have to wait long for a response to this envelope.
That's it for the moment for blogger trade packages so next time I'm expecting that I'll finally cover a pretty significant eBay purchase.
Posted by Dennis at 8:12 PM