Time to get back to some old fashioned blogger trades! Today's is from Kerry of Cards on Cards. I recently sent him a mix of stuff from shows and other sources and not long after I found a bubble mailer from him in my mailbox containing a great combination of Tigers and some of my PCs: 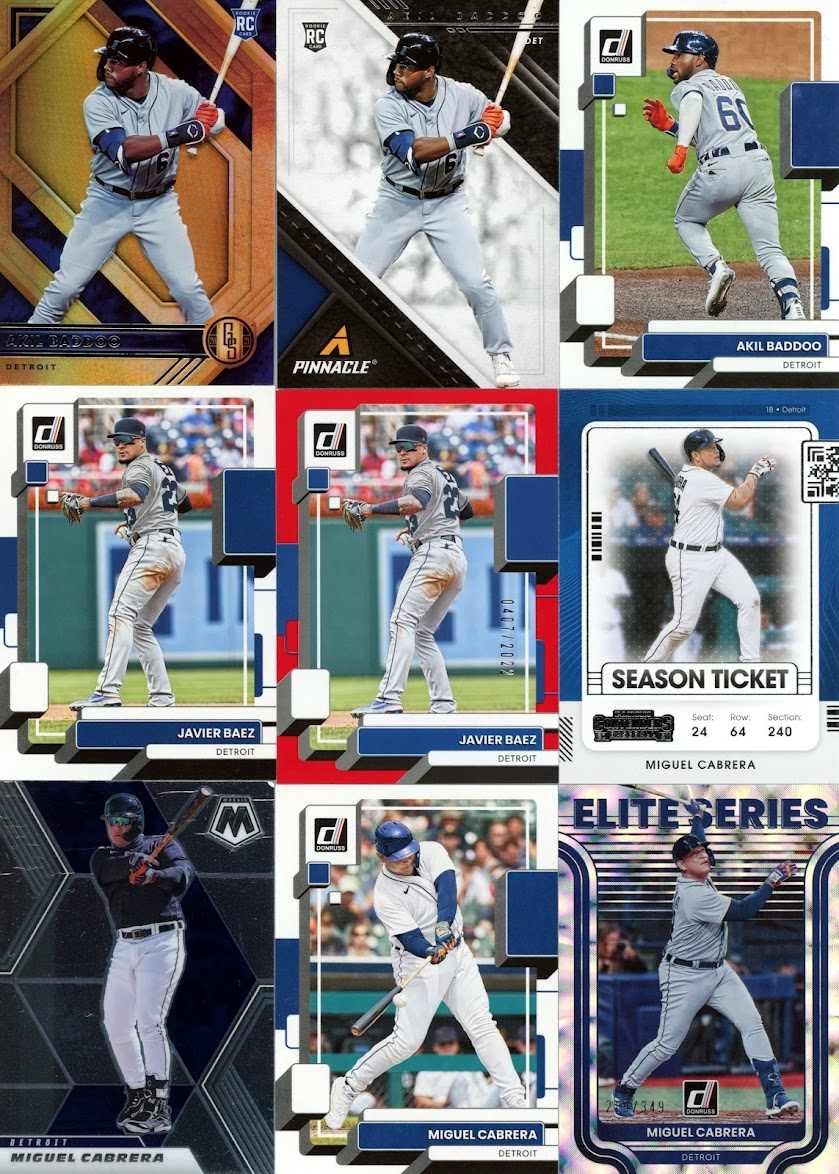 We'll look at the Tigers today first, and almost all of them are current players, even if some are injured or down in AAA. Baddoo's Chronicles Gold Standard base looks great but I can't say the same for the bland design of the Pinnacle version with the same photo. Baez has heated up of late and socked a grand slam in a win last night so maybe he's righted the ship? I like the numbered 2022 Donruss Red parallel here, and you'll see another shortly. There's four more Miggy cards to add to his large collection (350-plus!) and I'm a fan of both the Contenders and Elite Series insert (numbered /349!) to say nothing of the other two. 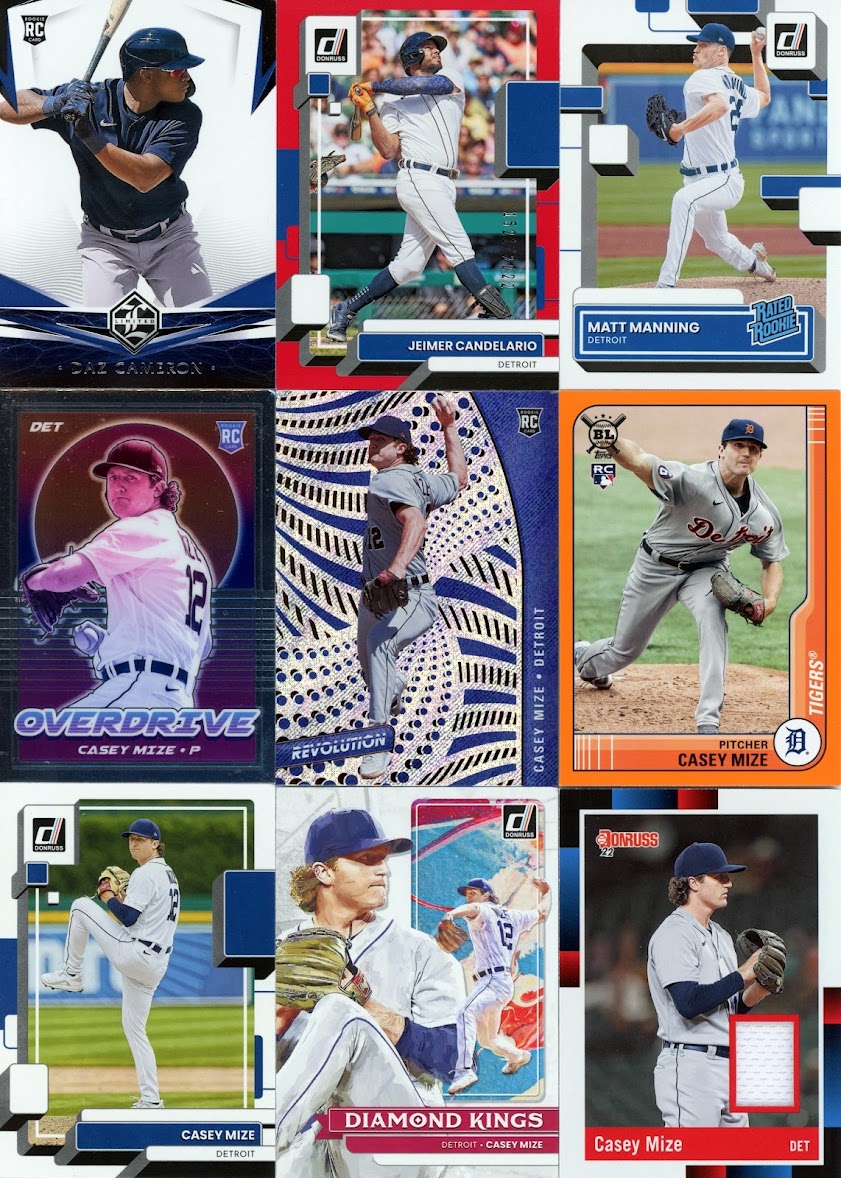 Cameron's been up and down a bit but Mike's son could still turn into a productive bench OF guy. Jeimer (who needs to take an example from Baez) looks good on his own Donruss Red /2022. Manning (Rated Rookie!) still has a shot to return this season from injury, but unfortunately that won't be the case for TJ subject Casey Mize. I'm grateful to Kerry for the six new Mize cards, though! The Chronicles Revolution and Donruss base DK card are very cool and I was also happy to score my first hit of the injured prospect, a Donruss jersey! 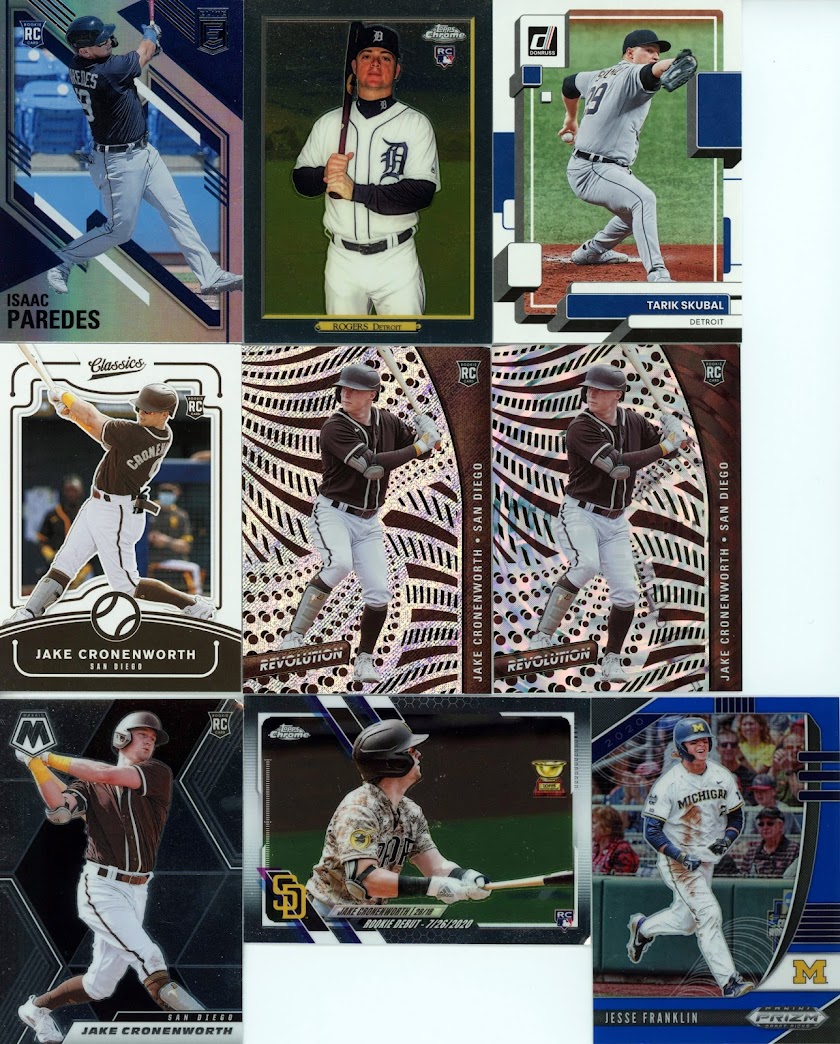 Paredes' Chronicles Elite card looks great but mainly it's just a reminder that awful GM Al Avila lost him to Tampa in a panic trade for Austin Meadows after Riley Greene got hurt before the season. I hope Rogers can return to health soon and bump Tucker Barnhart to a reserve role (and eventually off the team for good). Skubal's been roughed up lately since a strong start, not that it matters much in a lost season like 2022.
With the Tigers covered we can get into some other player collections. I was stoked to find the five Cronenworth cards you see above since I love to see his collection grow as he's the most notable Wolverine in the Majors right now, if not tied with Boston's Rich Hill. The Classics design is pretty boring but the Revolution cards bring to mind the heyday of Pacific. By the way, the version on the right is the Fractal parallel. Michigan alum Jesse Franklin looks smart on a (what else?) Blue Prizm from 2020 Prizm Draft, and I'm now up to six cards of his, with few looking better than this one that also comes with a great college action photo. 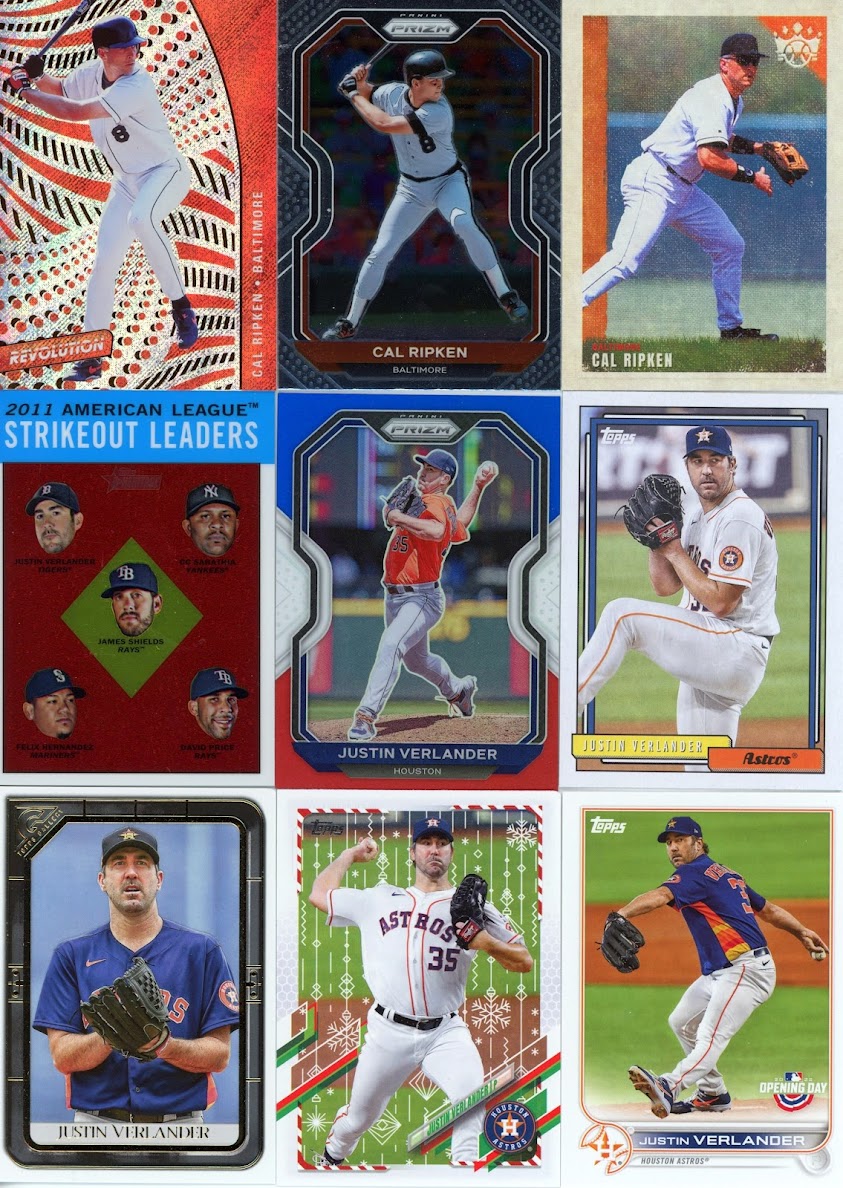 And today's last scan covers two of my most popular PCs. Cal is still #1 by a mile and with more than 1100 of his cards in my collection it's always a thrill to get new stuff of his. That was the case with all three cards you see along the top row featuring the Iron Man: 2021 Chronicles Revolution and Prizm and 2022 Diamond Kings. I wouldn't likely be chasing these down myself unless I found them at a show in dime/quarter boxes so I appreciate folks like Kerry that take the time and effort to send stuff from newer releases my way.
Finally, we have the co-star of the package who also got to add six new cards to his collection. You might even go so far as to say that's...too many? It's the guy whose name is at the top of every post you read here! Kerry sent me a great variety of Verlanders, all of which I needed. First you see a 2012 Heritage Chrome insert (#d /1963) and then we move all the way up to 2021 Prizm's Red/White/Blue Prizm parallel, which is a few weeks early for Independence Day but plenty welcome today. The four recent Topps cards you see are a 2021 Topps Update 1992 Topps Reflux--I mean Redux--insert along with base from the same year's Gallery (still looking nice!) and Holiday, plus 2022 Opening Day. JV's off to a string 9-3 start this year with a ridiculous 2.22 ERA and 84 strikeouts. In case any of you forgot, he pitched in a single game in 2020 and none last season before returning this year...at age 39. What can you say other than: legend.
Kerry, thanks so much for sending me some great cards like you always do! Hopefully next weekend I'll be back to the monthly show to start a new stack to send back your way.
Next up will be another envelope from a good friend and reliable trade partner, so watch out for that soon.
Posted by Dennis at 7:51 PM