As I slowly (very slowly!) continue catching up on trade packages from late last year, I'm back today with another great one from Doug of Sports Cards From the Dollar Store. The fifth envelope he sent me in 2021 came around the beginning of January, I believe, and he once again knocked it out of the park in sending some amazing and much needed cards my way: 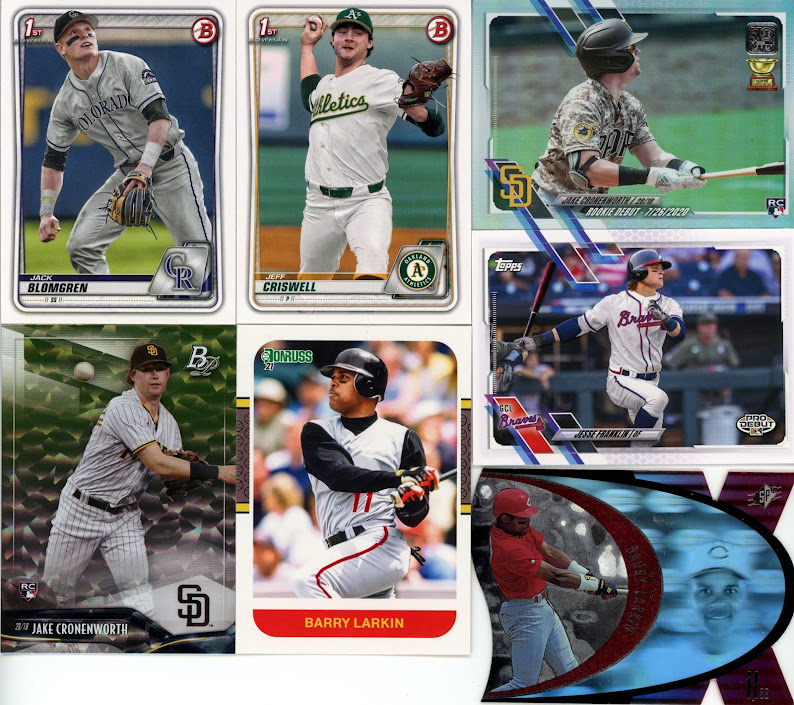 Baseball part 1 was a 100% Wolverines affair with seven cards hitting five different player collections. Blomgren, Criswell, and Franklin are all pretty recent draftees so I don't have a lot of their stuff yet, most of which consists of Bowman/Chrome and the various Topps minors-focused sets. That means I'm always glad to see them appear in trade packages like this one.
Just as welcome are two new cards of #CroneZone guy Jake Cronenworth, a guy who looks like a building block on what could be a dangerous Padres team at some point. The Bowman Platinum and Topps Update parallels of yesterday's birthday boy give me 25 cards of a player whose checklist has exploded since his recent breakout.
And the group concludes with a pair of cards of a guy whose last game was much closer to the production of the older card than the newer of the two you see. Barry Larkin's issue from the second year of UD's amazing SPx product is from 1997 while the Donruss base you see hails from 2021. Out of curiosity to anyone who sees this, which SPx design do you prefer more: 1996 or '97? I consider the latter a nice improvement on a very cool look but understand the appreciation for the OG.

The hit side of things was also very Michigan-centric with one exception. The Cronenworth auto, just my second after buying one at a recent show, is just my second of his, and Doug was generous enough to let me have it after he pulled it from one of several Chronicles boxes he's opened. Switching from sending him cards to straight cash since he pulls great stuff to send me remains on the table. Anyway, it's a very cool looking card out of the Panini Black Autographs insert and I'm excited to now have a second signature of the young star.
Next up is a Bowman Platinum auto of Portage, Michigan native (shout out to John!) and former Wolverines star pitcher Tommy Henry. As you can see here he was selected by Arizona, back in the 2019 draft, and he seems to be slotting in the middle of their top 30 prospects at the moment. This is my third autograph of the left and I'll gladly take more if I can get them!
Last up is a former Tigers prospect, Scott Sizemore, on a 2007 Bowman Heritage Signs of Greatness autograph card. One of Adam's/Spankee's favorite PC guys (yep, he's a Virginian), Sizemore spent a little time with Detroit in 2010 and '11 before being flipped to Oakland. Though he was a pretty good prospect at second and third, he was somewhat blocked by a combination of Brandon Inge, Carlos Guillen, and a couple utility guys, and he played minimally after 2011. He does, however, have an outstanding signature! 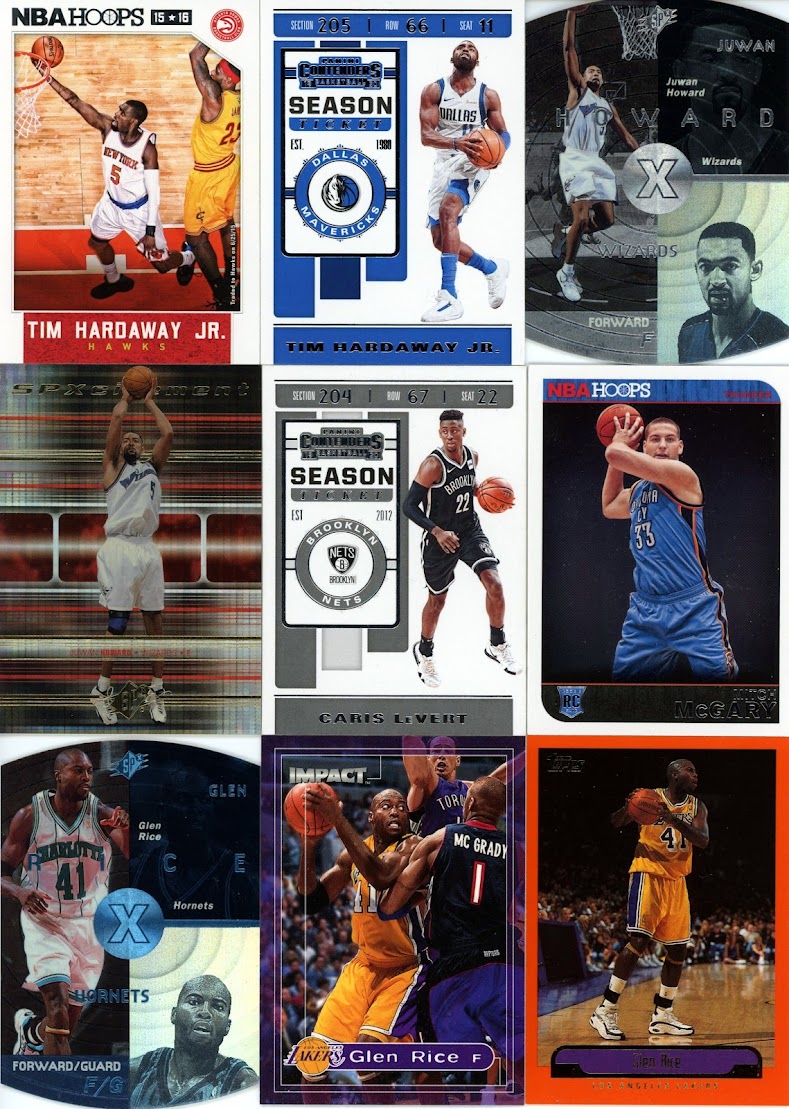 The basketball portion was 20 cards strong, and "strong" goes a long way towards describing the quality of some of these cards! THJ, coach Juwan Howard, Caris LeVert, Mitch McGary, and Glen Rice are all represented here, and the die-cut SPx offerings and Howard insert particularly stand out. Just lots of great new content from one of my collections that tends to lag behind the rest because of my relative disinterest in the sport. 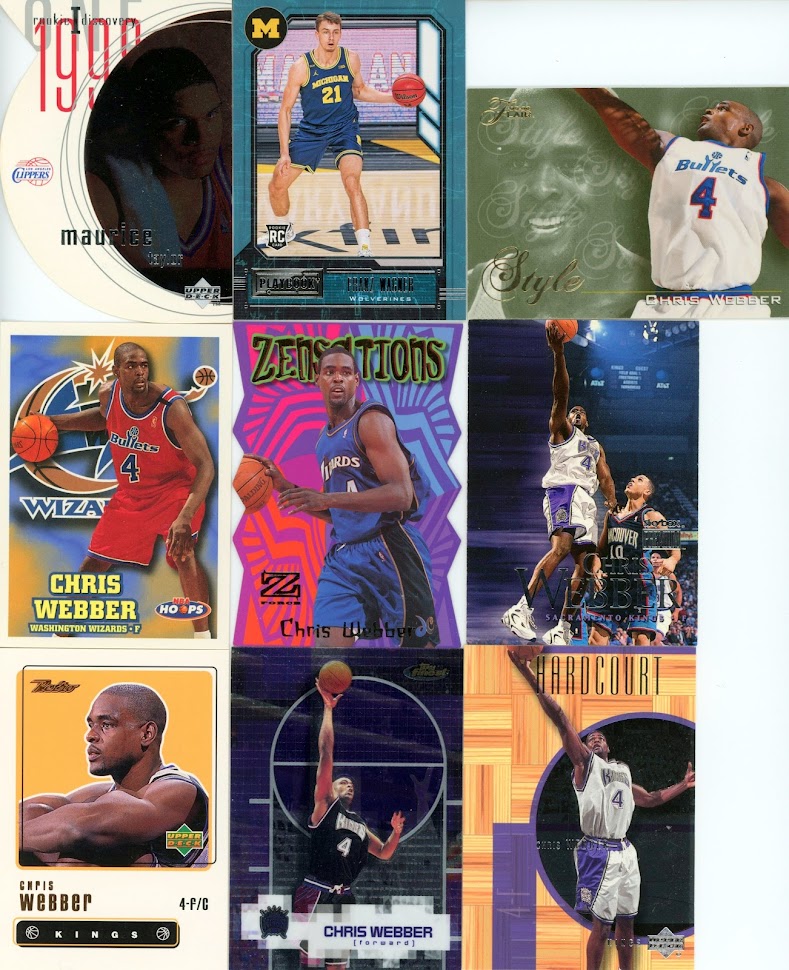 But it certainly piques my interest when I see cards like the ones above along with these! Three more players make appearances here: Maurice Taylor, Franz Wagner, and Chris Webber, and all three are shown on notable cards. Taylor's is a cool UD die-cut that screams "90s inserts rule!", Wagner's is a college uni photo, and Webber's got lots of razzle dazzle including die-cut and shiny inserts and base. By the way, Wagner's Orlando team may be rough in terms of its record but I love that he's teammates with his brother Mo (Moritz) plus fellow Wolverine Ignas Brazdeikis. 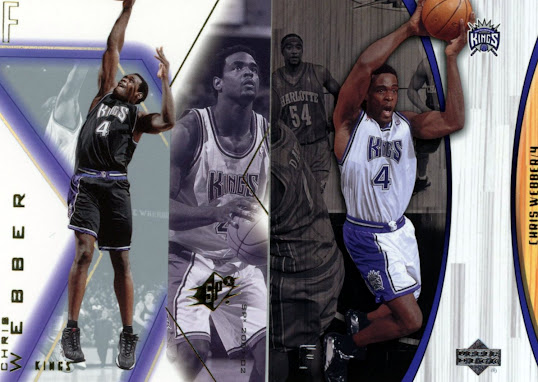 Here's a couple more Webber cards that didn't fit in the other scans since nine doesn't go into 20 nicely. C-Webb's sitting pretty in my basketball collection at #2 with 159 cards, second only to Rice's 204. 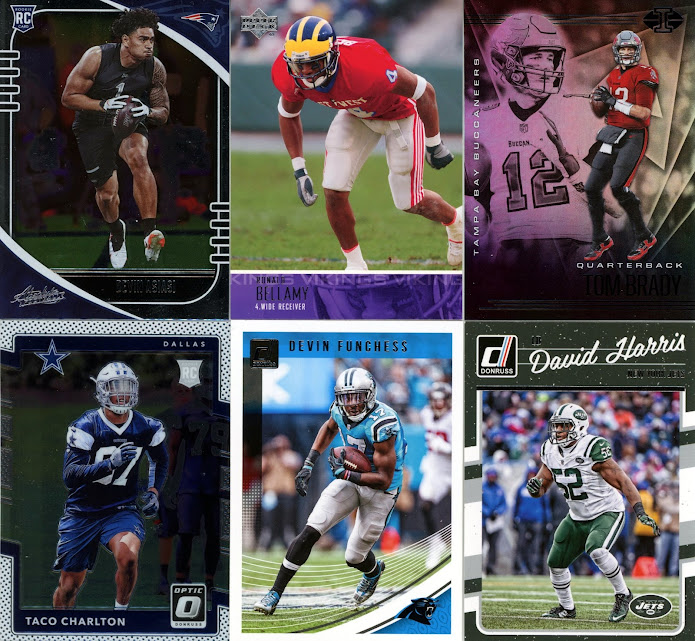 Moving over to football the last names were clumped together in the letters "A" through "H" but that's fine because you still have plenty of good players to choose from. Like transfer TE Devin Asiasi, former WR and current coach Ronald Bellamy, GOAT QB Tom Brady, and WR Devin Funchess on offense. Or if you're a defensive guy there's LBs Taco Charlton and David Harris. Charlton was one of I believe four former Michigan guys that played for the Steelers this year. And Bellamy's card makes me wonder how many Senior Bowl-type cards I have of the player in their college helmet and a pre-draft all-star game jersey. 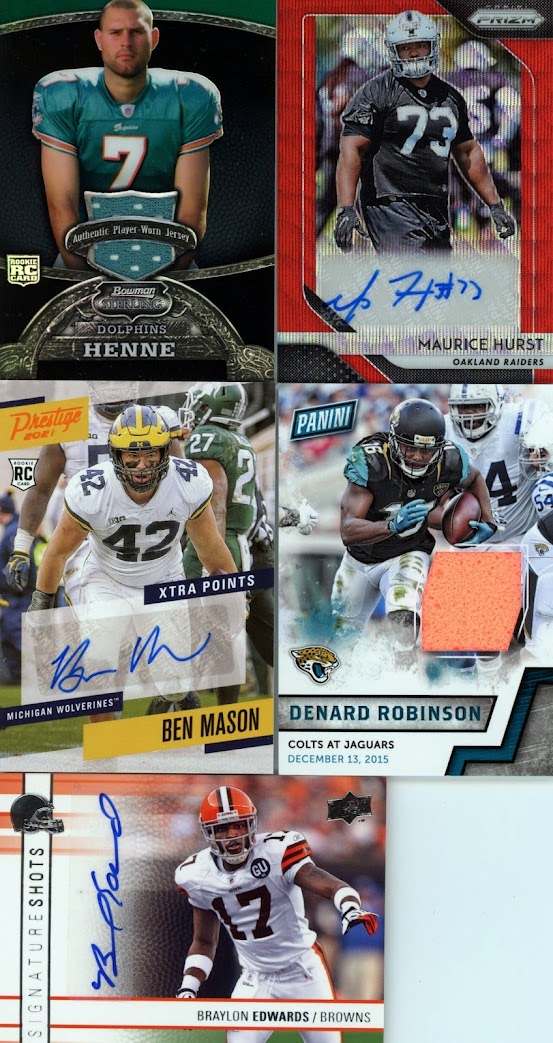 As with baseball, Doug really brought the boom with the hits here. Imagine my surprise when I saw the Henne jersey (2008 Bowman Sterling Green Refractor, #d /50) and found out that I didn't actually have it! That's a rarity these days since I own 138 different hits of the former UM QB.
Beastly DL Mo Hurst suited up for the Raiders his first three NFL seasons, as depicted on a 2018 Prizm auto (#d /199) above, but this year he's been plying his trade for the playoff-bound Niners, who are playing tonight, and also boast former Wolverines Lavert Hill, Ambry Thomas, and Jarrod Wilson on their defense. That's my fourth hit (all autos) of a DL who put up 13.5 sacks in Ann Arbor.
And then we have a new member to the PC (#229 overall), former FB Ben Mason. An excellent blocker and short-yardage/goal line back, "Bench" picked up 7 TDs in 2018, though his role on the team changed as coaches Jim Harbaugh and Josh Gattis tweaked the offense his last couple years. A Ravens draftee, Mason can be seen here on his 2021 Panini Chronicles Prestige auto, on that stars a great action photo of a guy whose position has largely been phased out of the game.
Definitely the most unique item of the package was a 2016 Panini Father's Day card of blog favorite dude Denard Robinson as it includes a piece of pylon from the Colts/Jags game on 12/13/2015. Looking at the box score of that 51-16 Jacksonville win (BORTLES!), Shoelace led both teams with 75 rushing yards (he tacked on a 12-yard catch) on 14 carries, including a 31-yarder plus a score from the 1. That was his lone TD that season and in fact the final one he'd score in the NFL, adding on to the four he accumulated the previous year. I'll have to look but I believe pylon relics are few and far between in my collection, though Denard certainly isn't as this is my 52nd hit of his.
And last up on the gridiron is a beauty of a horizontal auto card design courtesy of--who else?--Upper Deck. Braylon made the most of the room he had on his sticker affixed to this card that was part of UD's 2009 Signature Shots insert. A respectable 15 of my 93 hits of Edwards include a signature like this one but not all of them can claim a classy UD design.

And lastly for today, if the fact that I needed the Henne shown above was surprising, the relative dearth of hockey cards came as a shock! That certainly wasn't a bad thing, though, given the quality of everything else Doug fit into the envelope, plus he fills gaps in my Michigan Hockey and Red Wings PCs so frequently that going without them once won't kill me.
This very red trio of icers on UD products looks terrific all lined up together. Mathias Bromé is a Swedish winger in an organization that certainly knows how to value them, and UD took notice by including him in their coveted Young Guns subset in '20-'21. HOF goalie Dominik Hasek sandwiched a year with Doug's Senators with two two-year stints in Hockeytown, winning a pair of Cups in '01-'02 and '07-'08, and here he's seen on a '20-'21 UD Artifacts card #d /499. And my favorite of the trio is also numbered, plus it stars WolverWing Dylan Larkin. UD's Synergy brand has resulted in some very cool looking acetate cards like this '20-'21 Exceptional Young Stars insert, which is #d /749. The young star continues to be an important cog on offense, leading the team in points and tied in goals (with dumbass Tyler Bertuzzi) at 19. I love getting any and all new cards of his to add to my collection.
Doug, I'm sorry it took so long to recap this package but once again I want to say a huge thanks for all the Christmas goodies! As always I appreciate it big time and I'll continue to put in work to hit you back. The good news is I already have a couple things in hand and more in the works, so I'll at least try not to take so long to return fire.
The rest of you should stay tuned for six more blogger trades (more keep coming in!) and at least four TCDB trade recaps as I slowly try to catch up.
Posted by Dennis at 7:23 PM