I'm liking the idea of getting more cards put away today so let's look at another trade package from late last year! Kerry from Cards on Cards is a great dude to trade with because, as with a few of my other partners, we both college and MLB team and a college. In his case it's a couple of birds--the Cardinals and Oregon Ducks. Both of us saw our colleges lose to tough competition in bowl games, but we also root for the two teams that beat Ohio State in 2021, which is an exclusive and awesome club!
Anyway, back in mid/late November Kerry posted a break of a blaster of Bowman Platinum. While that's one of my least favorite of Topps' overabundance of products, he pulled a card of one of my PC guys and was nice enough to set it aside for me when I asked about it. I made sure to include him in my yearly Christmas cards mailing (which I think he hasn't posted yet? Not that I'm one to talk since I'm only now posting this!) and at some point I believe in December I got a really cool PWE back from him:

First up is rookie sensation Rule V pick Akil Baddoo on a 2021 Panini Chronicles insert. I'm very happy that I was so thoroughly proven wrong about his ability to stick in the bigs because he was a bright spot in 2021, plus he has a chance to step into the shoes vacated by talented character guys Curtis Granderson and Austin Jackson in CF.
The Bowman Platinum of recent Michigan up-and-comer Jake Cronenworth is the card that got this deal started, and that would be his base RC. Side note: you saw the Ice Foil parallel in my trade package post yesterday from Doug. Kerry was generous enough to add another RC to add to the #CroneZone, out of 2021 Topps Chrome (#ChromeZone?). I appreciate Kerry for sending the pair as I try to build his collection despite his prices increasing due to his breakout.
Heading back to the Tigers for a minute, Kerry surprised me with a pair of issues from 2021 Allen & Ginter X. I don't understand the point of the product as it appears to be the same as the regular product with a black color scheme, but I do like getting cards of both Mr. Tiger and rising pitcher Tarik Skubal (also a RC). That's a great photo of an older Kaline, and I need all the Skubals I can get as I watch him compete for a long term spot in the rotation!
Last up in this scan is one many Verlander, and I'm grateful that he included it as it's a new one to me from 2021 Panini Prizm. I don't think I'll have to worry about the number of JV Astros cards in my collection dwarfing Tigers cards anytime soon. After a quick check only about 20% of the nearly 500(!) Verlanders in my collection depict him with Houston, and that is not too many! 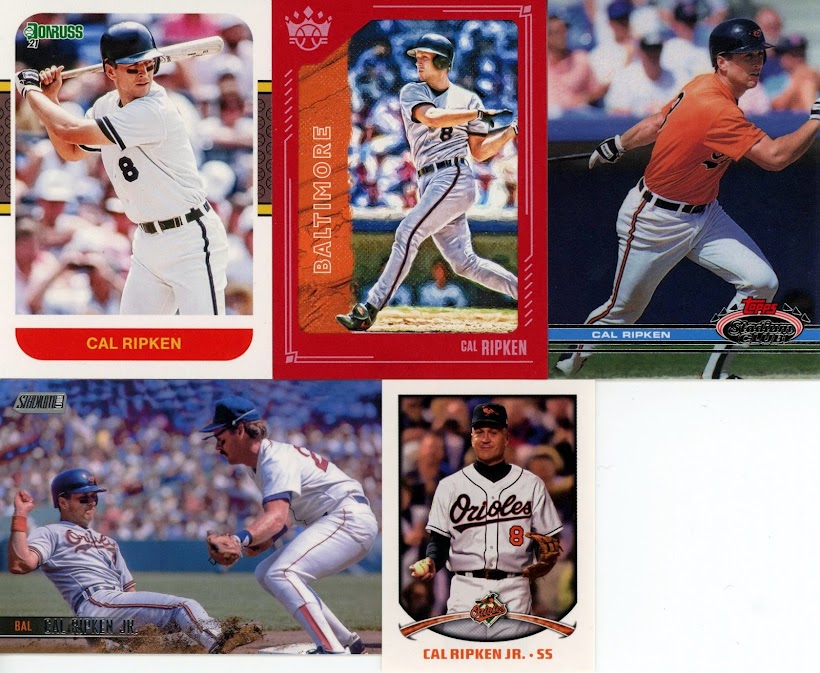 Besides that nice bunch, Kerry tossed in five Ripken cards as well. It's really nice to be known for collecting certain players (especially when you don't collect that team in general) and knowing some folks will include them in trade mailers sometimes.
This mostly 2021 group starts with a Panini pair from Donruss and Diamond Kings. The Donruss base mimics the '87 design (if not color scheme since they're white instead of black) while the DK card, a Red Frame parallel, looks super sharp. Long live the Diamond Kings brand/insert/design in general.
Hopping over to Topps we have a pair from this year's Stadium Club offering (and may that continue in perpetuity as well!). The vertical card in the top row is from the Stadium Club Greats insert that reprints fronts from some of the game's biggest stars, then has a writeup on the back. This one is, of course, Cal's appearance in the '91 Debut set that's now more than 30 years old (that can't be right, can it?!). Below it and to the left is the Iron Man's base card from the '21 set, one that includes a cameo from fellow HOFer Wade Boggs. The horizontal action photo is outstanding, and honestly other than the updated brand name logo, I'd say the card could pass for a number of past designs. Thumbs way up!
And to close things out this evening we have the smallest item in the envelope: a 2015 Topps sticker. Cal joins a number of past stars in a checklist that mostly skews towards today's players (and mascots), hopefully bringing them to the attention of younger generations. I have stickers in my collection dating back to at least the 70s and will continue to enjoy collecting them as long as they're produced alongside cards. The biggest difference is that I'm no longer sticking them into albums like I did as a kid. Then they wouldn't be mint condition!
Kerry, thanks again for sending the Bowman Platinum Cronenworth my way and giving it some very nice company for the trip! I appreciate it as always and look forward to another great year of trading with you in 2022. Expect a healthy pile of Cards and Ducks to come your way once I've restocked.
Coming up next is, you guessed it, another blogger trade package!
Posted by Dennis at 5:42 PM