We're 12 days into the new year and I'm finally back with my first post of 2022. However, thanks to a stack of trade packages from the past few weeks that I still need to cover, I'll be stuck in 2021 here for a bit longer. But it'll be worth it to show off all the goodies some nice folks sent me. I'm planning on covering blogger trades first and then getting to the deals I've made on TCDB lately.
Jeff who blogs at My Sports Obsession is one of my oldest blogging/trading buddies, and our shared interest in collecting Michigan sports means it's always a good time when we send cards back and forth.
At the end of November he let me know he'd sent a package my way and I was looking forward to it as usual, but I certainly didn't expect this: 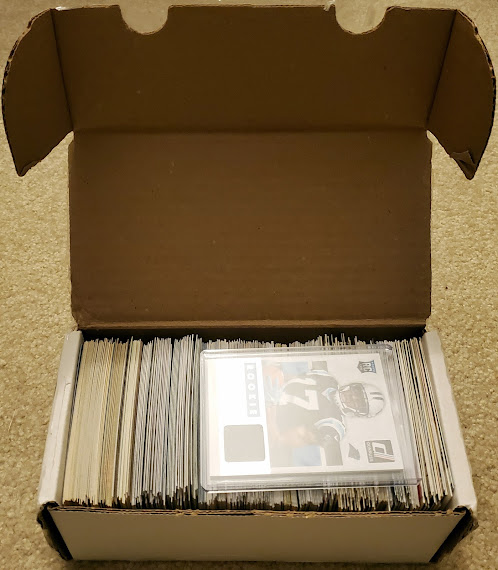 That box was absolutely stuffed with cards! He even held his nose and filled up a good chunk of it with Tigers stuff. Check out how the piles came out in terms of baseball, basketball, and football stuff: 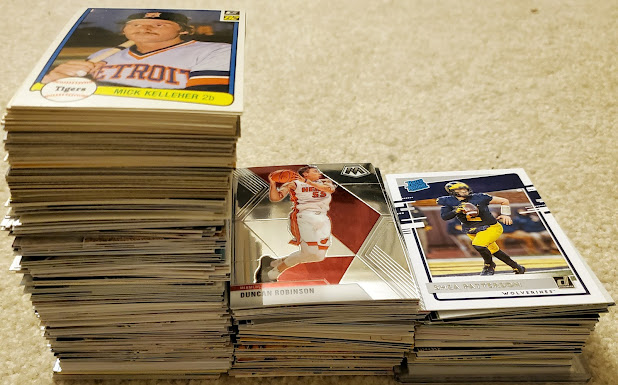 After thinking about how I wanted to present these I decided to try to show off all my keepers in a mix of scans and (mostly) photos. Here's the goods: 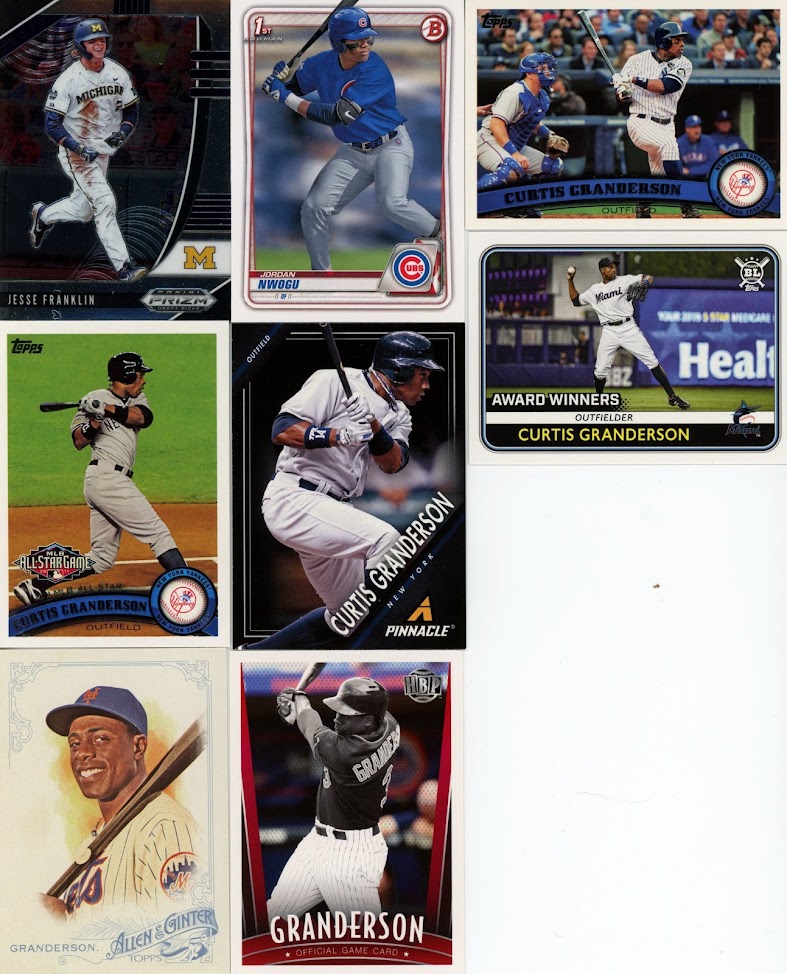 Scan 1/3 includes three of my PCs, two of which are Wolverines. Seattle native and Braves prospect Jesse Franklin is up first on just my third card of his, from 2020 Panini Prizm Draft Picks. Big thumbs up for a Michigan uni card! Canadian Cubs draftee and Franklin's former 2018-19 Michigan teammate Jordan Nwogu is next on his 2020 Bowman Draft base that give me three issues of him as well. And then there's many (almost TOO many?) Grandersons, six of them in fact. Although they represent three of his seven career franchises (both NY teams and the Marlins), the Tigers aren't one of them. Well played, Jeff! The group pushed his collection to 203 cards so I can officially say I have two hundred many Grandersons! 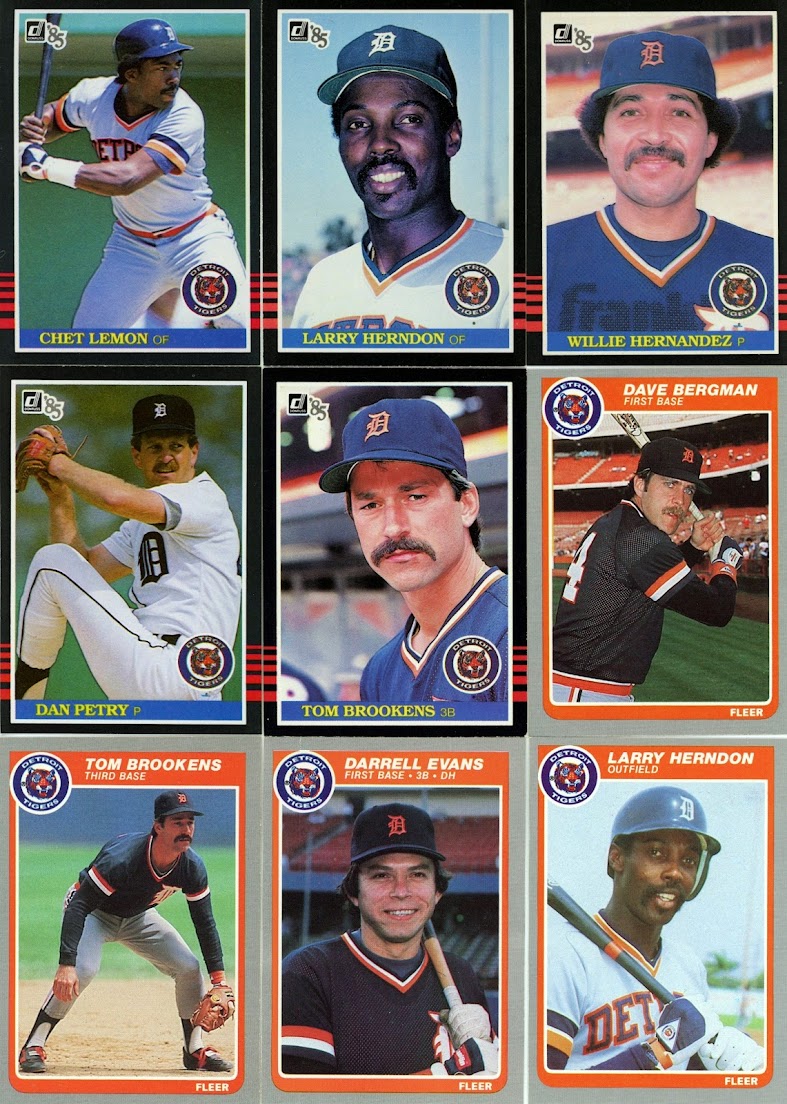 The other cards I decided to scan because they grouped together nicely were mainly 1985 Donruss and Fleer Tigers. These are a lot of fun for me since they feature stats from the '84 World Champs, so some of my favorites from the teams history are represented right here, in some cases twice. 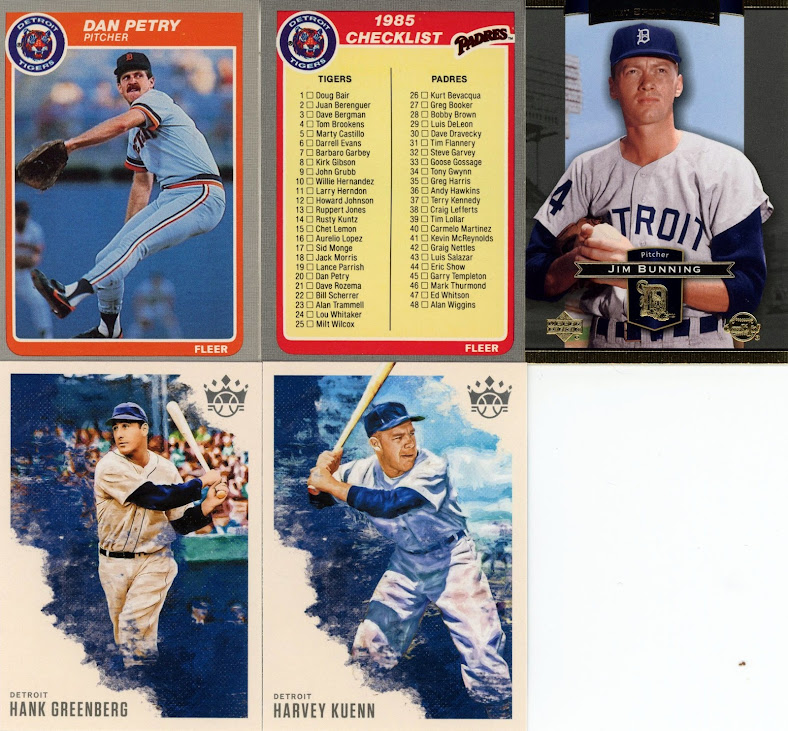 Petry is the last of the players from the '85 sets but not the last card since the Tigers (and their '84 World Series foes the Padres) were represented on a checklist as well. Since this group is obviously all Tigers from a while ago I grouped in the three vintage stars you see here as well. Bunning, the HOFer who pitched a perfect game AND no-hitter, went into the Hall as a member of the Phillies but spent the first nine of his 17 seasons with the Tigers, so it's totally reasonable he's shown with Detroit on his Sweet Spot card. And Greenberg and Kuenn weren't teammates--they missed each other by a few seasons--but I'm glad to have the pair representing the Tigers in Diamond King products any day! 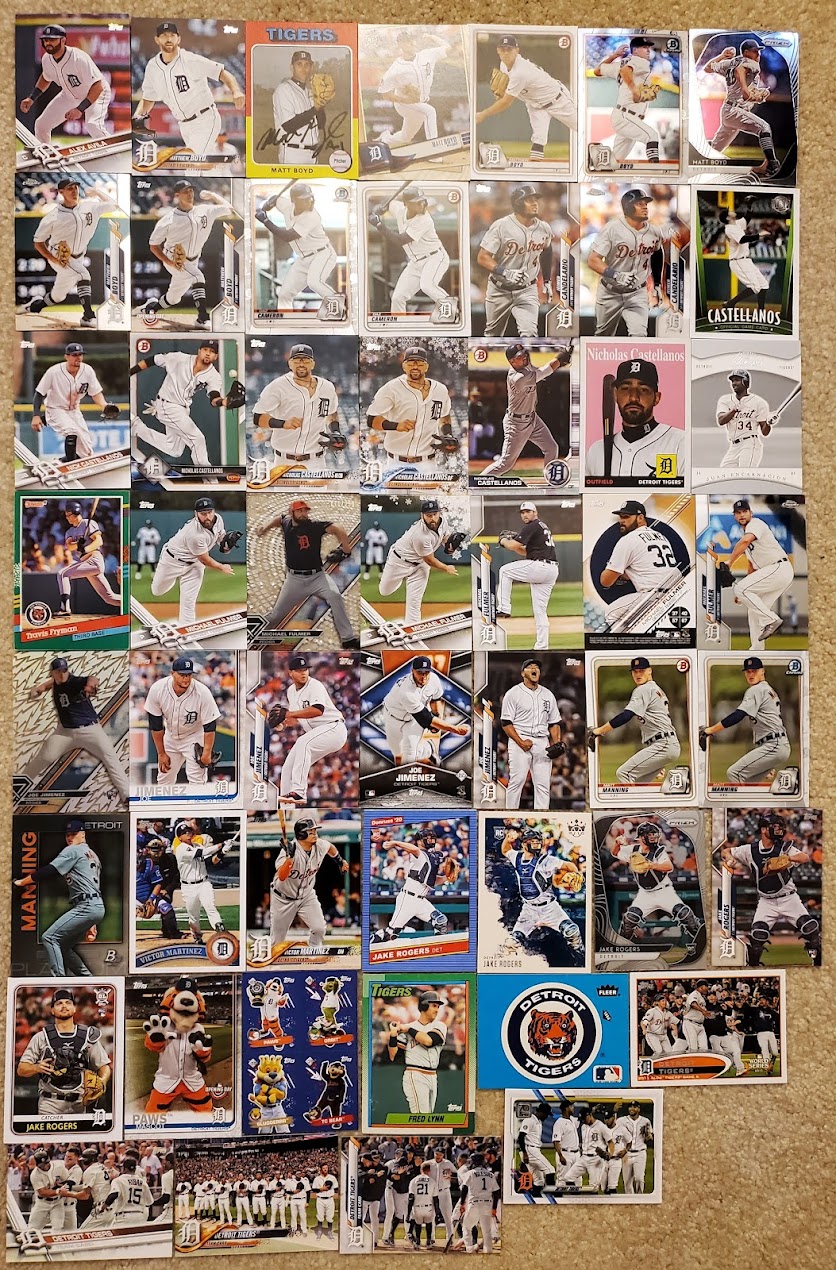 Here's the rest of the baseball group in photo form, and it's generally a who's who of current and relatively recent former Tigers. Represented above are Alex Avila, Matt Boyd, Daz Cameron, Jeimer Candelario, Nick Castellanos, Juan Encarnacion, Travis Fryman, Michael Fulmer, Joe Jimenez, Matt Manning, Victor Martinez, and Jake Rogers. A '90 Topps box card of Fred Lynn (generally known for his time with other franchises) rounds out the player group and then we also have some mascot cards of Paws, stickers, and team cards from the past few years of Topps flagship. There's some very nice stuff in the bunch, including a numbered Fulmer from Topps Hi Tek and a nice boost to my collection of young catcher Jake Rogers. 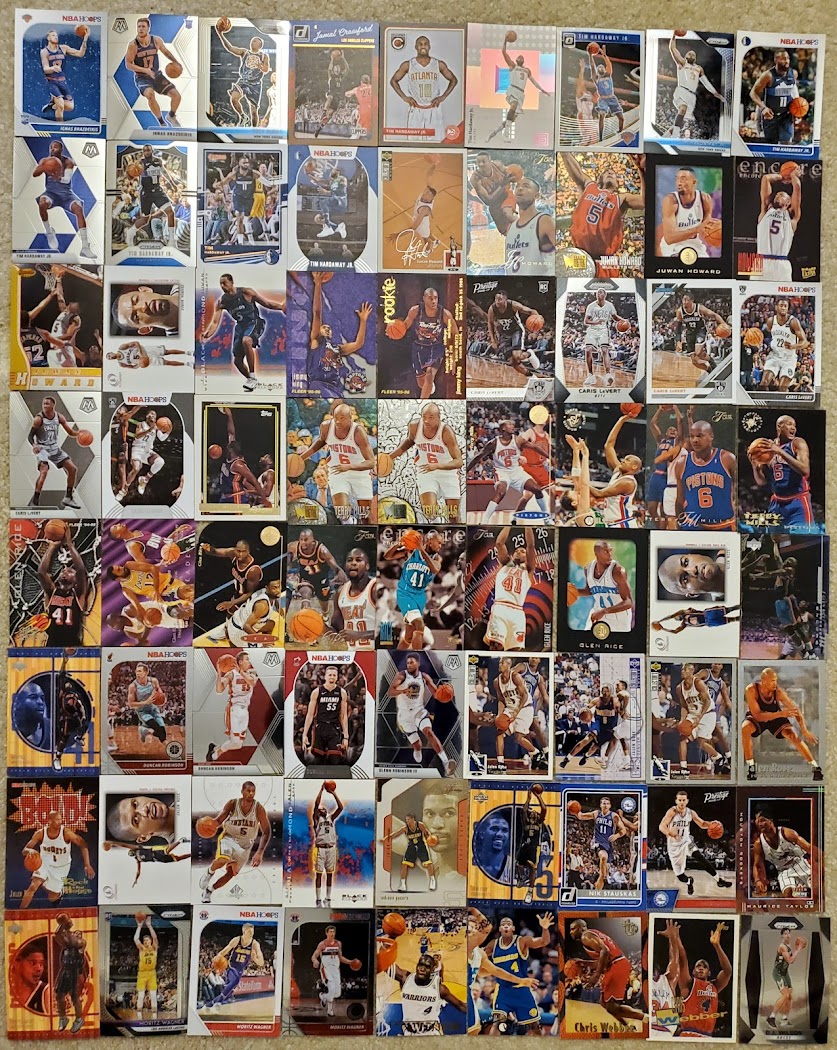 One sport I don't go out of my way to collect is basketball, but that doesn't mean I don't get excited when someone sends me some Wolverines hoopers in trades like this. Jeff hit a nice mix of former stars and fairly current players, really doing a nice job bulking up their numbers in my collection. The players above include Ignas Brazdeikis, Trey Burke, Jamal Crawford, Tim Hardaway Jr., Juwan Howard, Jimmy King, Caris Levert, Terry Mills, Glen Rice, Duncan Robinson, Glenn Robinson III, Jalen Rose, Nik Stauskas, Maurice Taylor, Mo Wagner, Chris Webber, and D.J. Wilson. THJ's count got a nice bump as did some of the Fab Five-ers, and even Glen Rice's total got a nice bump despite already being #1 in my collection for the sport. He joined Granderson above in eclipsing the 200-card mark at 203, with Chris Webber next at 151, and current Wolverines coach Juwan Howard taking the bronze with 99. There's a very cool mix of brands and designs here and while I'm not sure the photo does a good job of capturing it, some of these really pop! It's also nice seeing some of these players' collections grow since that generally doesn't happen on my account. 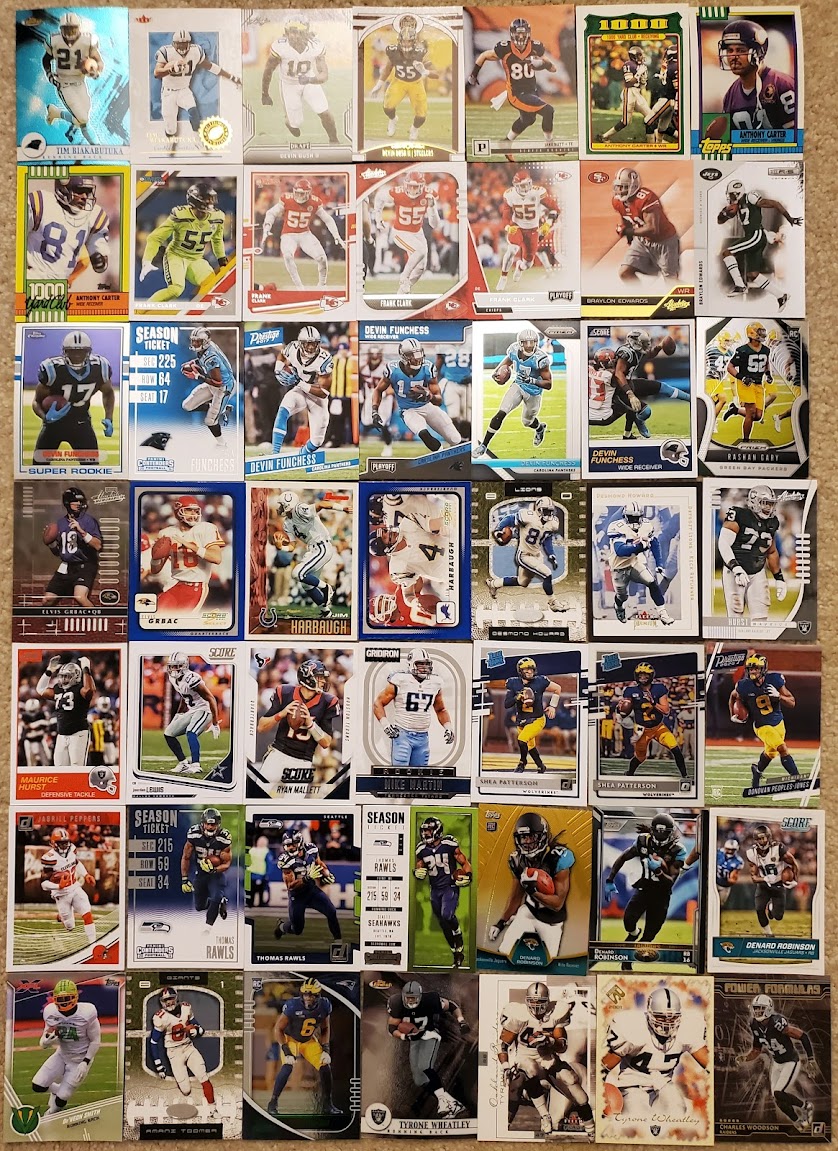 Last up today is football, and here I'll say I appreciate Jeff's efforts even more since I know he doesn't tend to collect some of the older former players that I do. My understanding is that a lot of these came out of boxes of stuff his cousin bought from collections to stock his future card shop, and there's obviously a huge alumni base to check for when sorting things out. So thanks, Jeff!
The mix of old and new here includes Tim Biakabutuka, Devin Bush, Jake Butt, Anthony Carter, Frank Clark, Braylon Edwards, Devin Funchess, Rashan Gary, Elvis Grbac, Jim Harbaugh, Desmond Howard, Maurice Hurst, Jourdan Lewis, Ryan Mallett, Mike Martin, Shea Patterson, Donovan Peoples-Jones, Jabrill Peppers, Thomas Rawls, Denard Robinson, De'Veon Smith, Amani Toomer, Josh Uche, Tyrone Wheatley, and Charles Woodson.
I loved seeing a few college uniform cards in there and was of course ecstatic to add to the collections of everyone listed. I wasn't too surprised by some of the players who were more represented than others like Funchess and Denard since they're big parts of Jeff's PC. But past greats like current coach Jim Harbaugh, beastly back Tim Biakabutuka, and GOAT Charles Woodson were nice surprises as well, especially the latter's super nice looking insert. 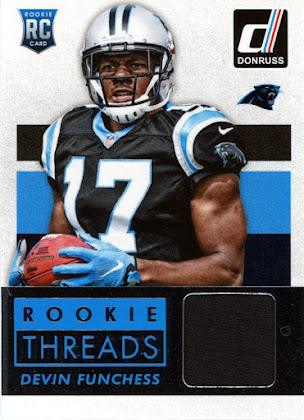 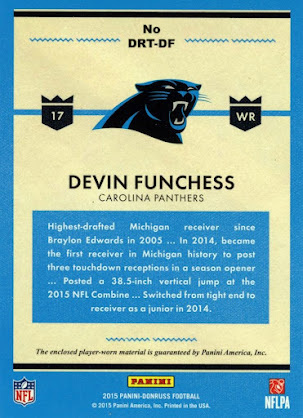 You might have been wondering since that first image what that jersey card was, and it turns out it's this nice 2015 Donruss Rookie Threads swatch of the already mentioned Funchess. The erstwhile Panther has played sparingly since leaving Carolina for Indy and hasn't seen game action since 2019 due to injuries and a COVID opt-out. I don't know if he'll be able to make his way back into the league but I'm happy to keep collecting him anyway. And I'm also happy to point out that this is my 20th hit of the former TE/WR! It's the 11th relic to go with four autographs, an auto/relic, two patches, and two plates. Not bad!
Jeff, thanks again for the huge box of Tigers and Wolverines goodness that arrived in plenty of time for Christmas, even if I'm only recapping it a few weeks after. I appreciate all the time you put into pulling that stuff for me, and as always I look forward to hitting you back with some Wolverines of my own, a few of your player collections, and (sigh) even some White Sox!
Looking over at my card desk I count four more blogger trade packages and a pair from TCDB with at least two more from the latter on the way, so next time look forward to another trade recap from another of the usual suspects.
Posted by Dennis at 8:11 PM