As if I didn't already have enough to be thankful for today--a day off, sleeping in, hanging with my family, and some great food--Matt of Sport Card Collectors (and Big Blue Cardboard and Cards Over Coffee) recently decided to treat me to a PWE and then seconds, with both arriving on Tuesday. This evening seems like a perfect time to share them so I'm going to do just that, changing things up a bit and covering them one at a time!
PWE #1: 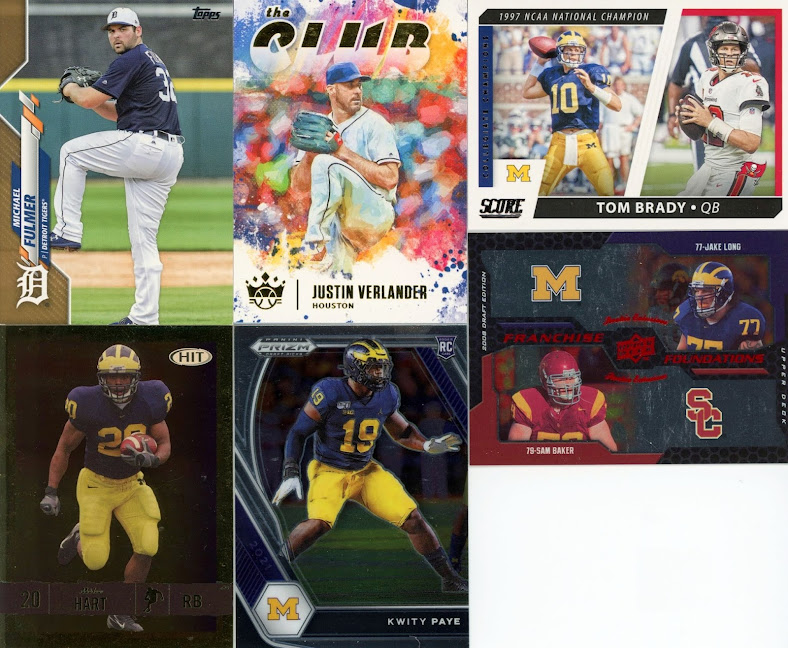 Tigers and Wolverines: two teams I'm thankful to root for even if it's been a while since either has been at the top of their sport. We'll start on the diamond with a pair of AL ROY pitchers. Fulmer came back from TJ surgery to be fairly effective as a closer, though I don't know if that's his expected role in 2022. He appears here on a 2020 Topps Update Gold parallel (#0080/2020). A decade earlier some clean shaven kid named Verlander took the league by storm and was the top rookie, and Justin's seen here on a cool 2021 Diamond Kings insert I wasn't aware of called "The Club." The back notes a cool feat of his from 2019 when he joined the club (hey, that's the name of this set!) of pitchers with 3000 strikeouts while also going over the 300 mark for the season. Not bad!
The football side of things was all college unis all the time, so bonus points to Matt! First up is a 2021 Score insert called Collegiate Champions, and yes, Brady had a small role on the last title-winning Michigan Football squad, and then went on to contribute a bit to seven Super Bowl champs. Hart is my favorite all-time Michigan RB and I love how he's guiding the current players while coaching the position. You could call him the gold standard and that would be appropriate as he's seen here on a 2008 SAGE HIT Gold parallel. 2021 first-round monster Kwity Paye, as seen from this year's Prizm Draft set, has gotten better as the season's gone on, picking up a sack in each of his las two games to go with a forced fumble (and a pair of fumble recoveries earlier this year). And Hart's 2008 draft mate and #1 overall pick Jake Long was also a gold standard while manning LT for Dolphins teammate Chad Henne in Ann Arbor and Miami. He shares a 2008 UD Draft Edition Franchise Foundations subset offering with USC/Falcons T Sam Baker, a guy also highly regarded at the position who joined Jake as an '08 first rounder.

That was a high quality group of cards, so how about envelope #2?: 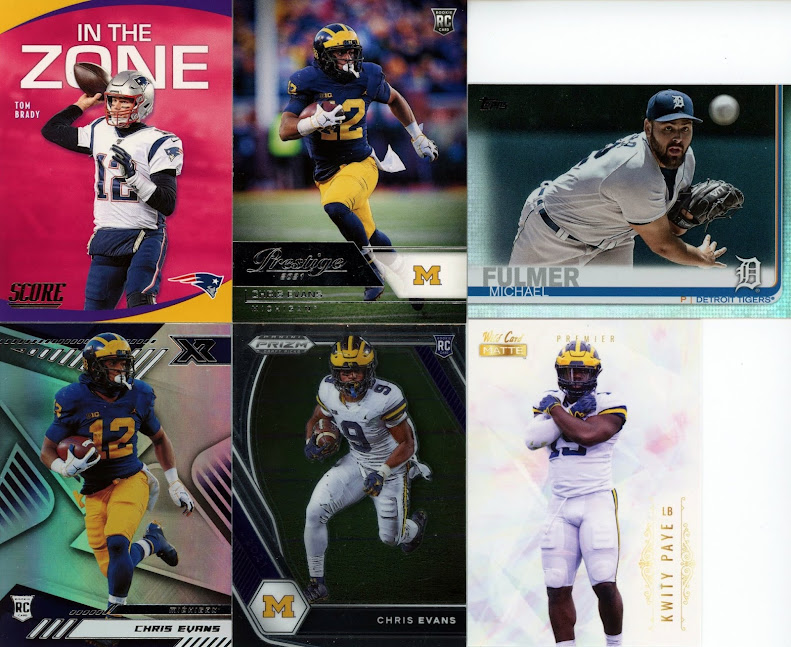 Look who's back--Michael Fulmer! He was the only landscape card so I scanned him at the end of the first row but I'll start with him here. Though the image doesn't completely capture the reflectivity going on here, that's a 2019 Topps Rainbow Foil parallel of a nice action shot. After missing 2019 and a chunk of 2020, he came back this season to appear in 52 games, just four of which were starts, and ended up with 14 saves. I don't get the impression the rotation will have room for him unless a young guy really falters in spring training, but he could still be a valuable bullpen arm, swing starter, or trade piece.

And now we head back to college football, the sport on my mind as Michigan prepares to face football factory/school optional juggernaut OSU. Brady is our second of three repeat players here and his is the only card with an NFL action shot. That's from 2020 Score's In the Zone insert and as you can tell from two of the corners it's the Gold parallel version. Speed-in-space receiving back Chris Evans of the Bengals gets half this envelope to himself thanks to 2021 Panini Chronicles cards repping Prestige and XR along with the previously seen Prizm Draft. XR hasn't been around long and I don't know if I'm a huge fan yet but Prestige has long been good to collectors like myself. And Paye also makes his triumphant return here in a product I don't believe I'd set my eyes on before, 2021 Wild Card Matte White. It brings back the well known name from a few decades ago if not the design or a license, but Paye's Wolverines uni didn't need to get airbrushed so that's a big plus for me. Also, the Stripe parallels are back and some might chase those for the nostalgia kick.
Matt, thanks as always for your trademark generosity in PWE form. At some point before the next holiday I'll be rewarding you with a larger envelope filled with your favorite blue team and lots more.
And most definitely before then I'll be showing off the substantial trade box that arrived the other day, a couple high-end eBay pickups, and then hopefully more of the Facebook lot. But I'm ready to succumb to turkey coma, so Happy Thanksgiving, all!
Posted by Dennis at 8:03 PM