Blogging legend Night Owl and I are very different in terms of what we collect, but one great part of the hobby is that that doesn't remotely matter when it comes to trading. To thank me for sending him his first second autograph of Paul Lo Duca, a cheapo I found at a recent show, Greg got a PWE over to me earlier this week. I didn't expect anything which made it that much nicer, and that meant I had no idea what I'd be pulling out of the envelope, which is even more fun. I'd say he did an outstanding job picking out these cards for me: 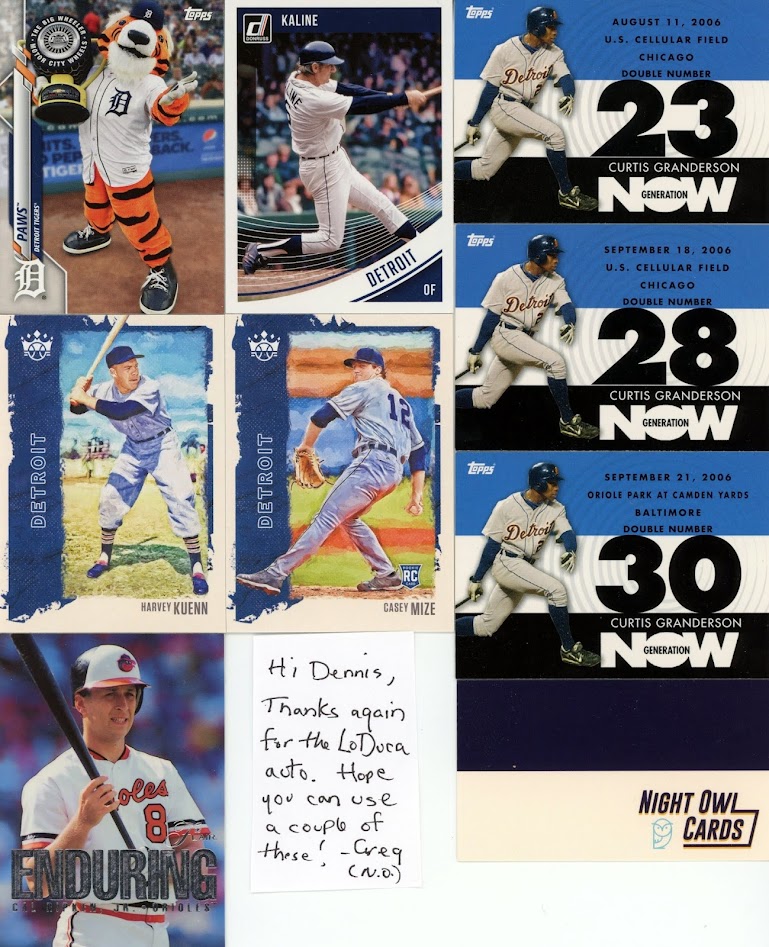 Since I had room I thought I'd include the tiny note he sent (always a plus, and something I like to do as well!) and fancy business card. I know I've said this before but I tend to keep pretty much anything like the latter because it's kind of fun to collect in its own right, plus people obviously put effort into it, so you won't see me throwing that stuff away!
Anyway, on to what we have here. Let's start with the quartet of vertical Tigers. Cards seem to be less and less for kids these days but you'll still see mascots pop up like Detroit's Paws on a 2020 insert. I didn't realize that season marked his 25th as the team's mascot, a pretty cool fact! Then Panini gives us a double dose of Tigers legends (and batting title winners) in Kaline--2018 Donruss last name only variation--and Kuenn--'21 Diamond Kings. I like that the latter has him listed with Detroit where he enjoyed the best seasons of his 15-year career, from 1952-59. He'll actually be popping up again in a future post, by the way. Joining him in that set is future rotation stalwart Casey Mize on an artistic RC. 2021 saw him enjoy a pretty solid first full campaign and I'm looking forward to seeing how he does when the team's actually got more talent around him.
The other four cards are also very exciting for me because they're kind of a double-dip: favorite players and wantlist help! I don't know if Greg hit up my wants on TCDB but I needed the entire quartet, starting with card #5 out of '95 Fleer's Cal Ripken Jr. insert also known as "Enduring." I now need just cards 1 and 3 to knock off the 15-card set, so if this was a blind guess by Greg then it was a hell of a shot!
Similarly, while I'm not going after the entire enormous 2007 Topps Generation Now chase set, I've slowly pieced together the ones representing current blog namesake Justin Verlander's 17 wins in 2006 (done) and also those of former title guy Curtis Granderson. Grandy put up 31 doubles in his first full season, then went 20/20/20/20 (2B/3B/HR/SB) the following season. The three cards Greg sent me got me up to 24/31 with not a double in sight, so once again if he managed to do that on a pure guess, that's amazing, and if instead he sought out my wants on TCDB, he's a very smart person.
Greg, thanks again for a fun PWE that hit my favorite baseball team, two of my best PCs, and two set wantlists all in just eight cards! I'll see if I can't hit you back before the end of the year in the event that I can find anything up your alley.
I'll be back soonish with another PWE trade post, one that's double the fun, plus a much larger package too!
Posted by Dennis at 7:47 PM