Dollar Store dude and Canadian buddy of the blog Doug of Sports Cards From the Dollar Store recently sent me a nice fat envelope for the fourth time this year and it was another doozy! As is often the case when he sends me stuff, all four major sports get hit so there's potentially something for everyone here. And most importantly, everything is for me! Let's look at the contents this time:

The baseball and basketball portions were limited but very strong. We get a look at two Cabreras: future HOFer Miggy plus potential future Tiger Daniel, an OF Detroit took in the second round out of LSU last year. Former Wolverine and sure-fire future star Jordan Nwogu, like the latter Cabrera above, came out of this year's Topps Pro Debut, which seems to be using a mix of designs, and that's always a plus. And the package's biggest hitter is also from that product: an autograph of one of the Tigers' cream of the crop prospects, Riley Greene. The fifth overall pick in 2019, Greene has as much upside as anyone else selected in that first round, and the outfielder tends to slot in just behind Spencer Torkelson atop the team's farm rankings. Doug pulled this bad boy, numbered /50 on the back, himself, and was nice enough to flip it to me for future considerations, which I'm still working on. Just another reminder of his legendary generosity.
Getting back to Wolverines, from a different sport, take a look at the recent-ish due of THJ and LeVert. It's crazy to me that the younger Hardaway will be going into his ninth season this year while Vert will be appearing in his sixth once he's healthy. 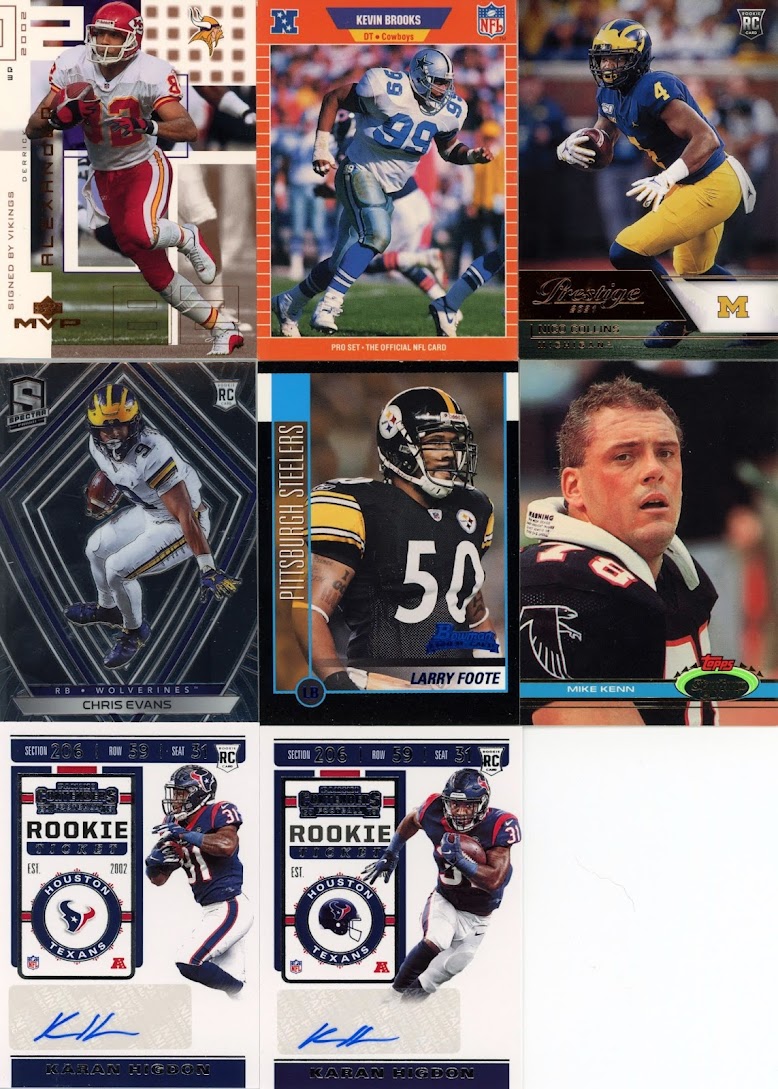 Heading over to the gridiron, Michigan's 6-0 start has surprised lots of fans including me. This here group mostly leans towards the rookies but has some vet representation as well. Alexander and Kenn appear on cards made after their first seasons while older Wolverines Brooks and Foote RCs bookend two of this year's newest NFLers in Collins and Evans out of Chronicles Draft, meaning best helmet in college football shows up front and center. And the two biggest items of the bunch come up next: twin (but not identical) autos of former RB Karan Higdon out of 2019 Contenders. The main differences between the variations are the photos and team logos used. The pair doubles my count of Higdon hits to four. 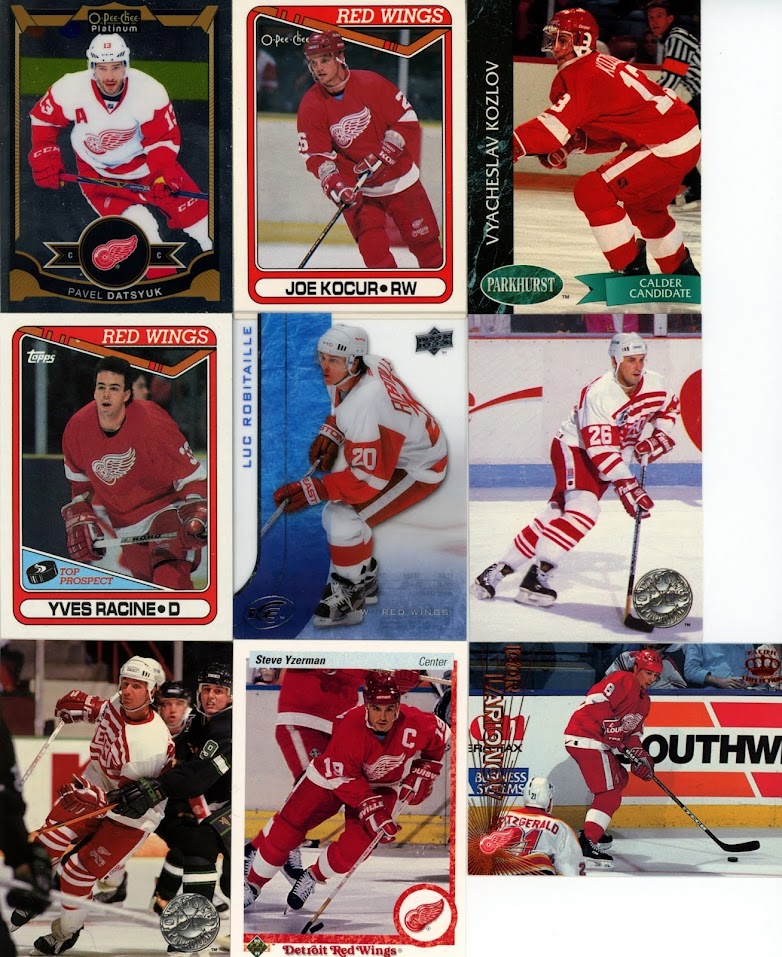 And of course the bulk of the package comprises hockey, with the Wings of Hockeytown dominating the count over the Wolverines. There was a great mix of old and new and I decided to lead off with the players I remember watching growing up along with some guys that starred for the franchise's dynasty in the late 90s/2000s (and a bit beyond). Almost all of these guys won Cups with the team aside from Racine, Sheppard (card #6), and Ysebaert (#7), and the latter are players I remember well from playing EA's super-fun NHL games in the mid-90s. It's fun to be a fan of a franchise with such a great history, and one with some decently recent success too! 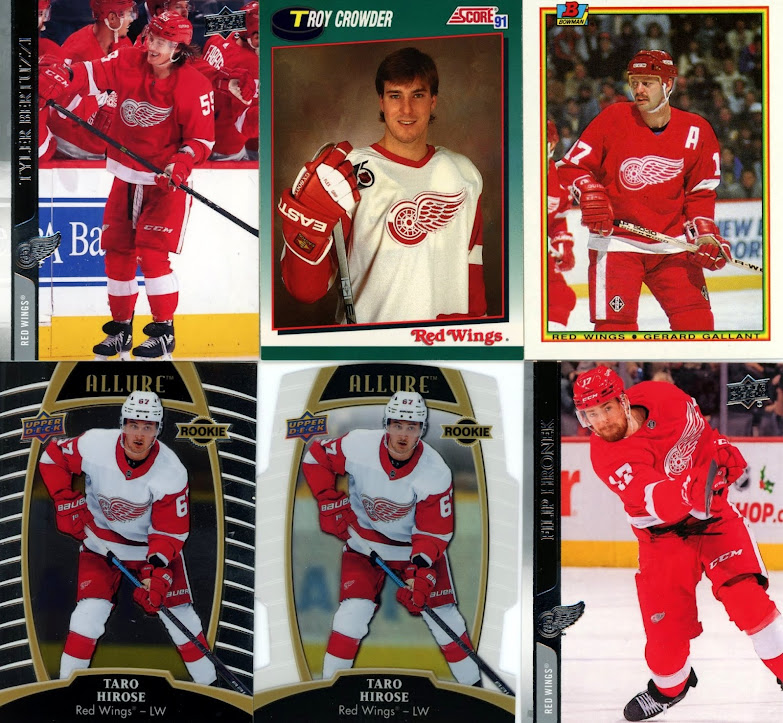 Here we have mostly recent players with the exception of one-year Wing Crowder and Gallant, whose Wings career ended a bit before I was really following them. He's since carved out a solid coaching career. Hirose's cards are from UD's pretty cool Allure product, and better yet the back of the die-cut parallel tells you exactly what it's called: White Rainbow. More of this, please! 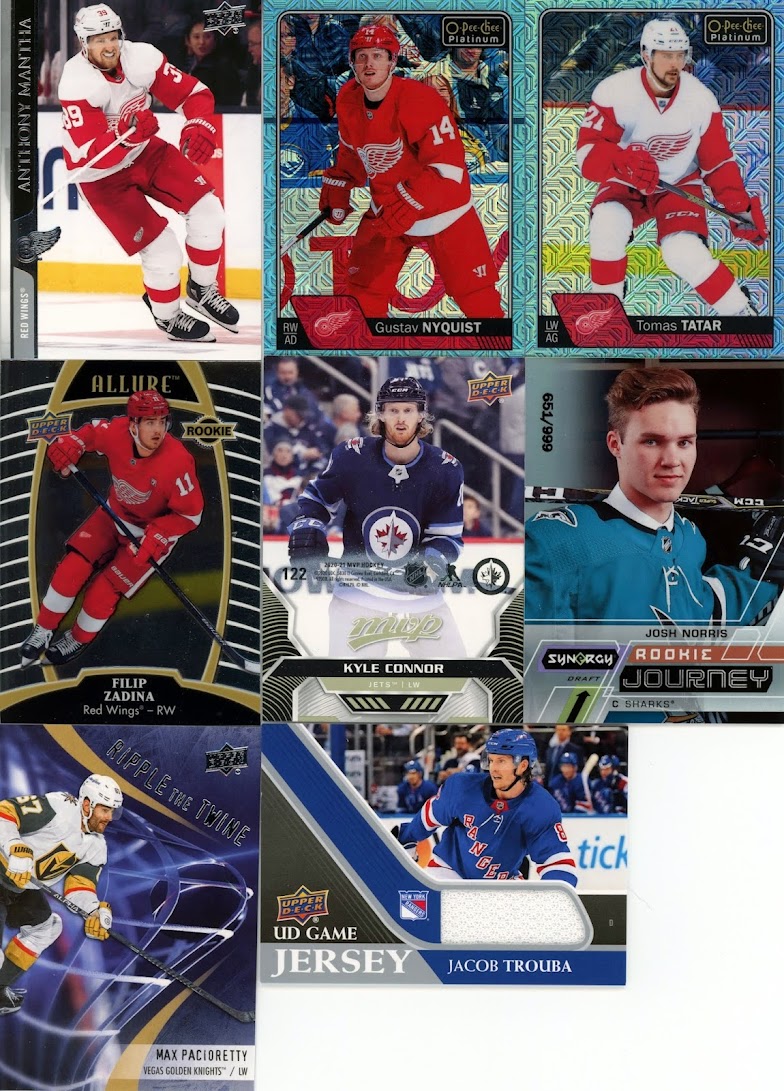 And we end tonight's post on this scan with a mix of Wings and Wolverines, but no Wolverwings this time. The erstwhile Nyquist and Tatar parallels are 2016-17 OPC Ice Blue Traxx cards, and I know that because once again Upper Deck told me exactly that on their backs. They're cool looking parallels in my book!
As for the alumni of the #1 team in the NCAA right now, we'll start with Connor's card which is a Puzzle Back from last year's UD MVP (part of an image that forms Brent Burns of the Sharks). Sharks draftee and current Sen (Doug's team!) Josh Norris makes his debut in my collection with a 2021 UD Synergy inserted called Rookie Journey Draft, which is numbered /999. Patch is much more represented in my collection due to his stardom resulting in a lot of cards made, like the insert above from 2020-21 UD called Ripple the Twine--a cool hockey term I'd somehow never heard before. And last up is a nicely designed jersey relic starring Jacob Trouba, a defenseman drafted by the Jets who now plays for the Rangers. I like how the swatch forms the blade in the hockey stick design they've got going on. I also like that it represents hit #15 of the former first-rounder in my collection.
And speaking of interesting numbers, which I don't feel like I've done much lately, it's time to celebrate yet another collecting milestone for my Michigan alumni hits collection: 2400 cards! 2401 to be exact, thanks to the three here from Doug. One of these days maybe I'll go through some older posts to try to calculate just how integral he's been in that collection, especially the 300+ from hockey alone, but even without looking I can tell you he's contributed a LOT.
So for the 42nd time on this here blog alone (not including those posted on Too Many Manninghams), I have to extend a huge thanks to Doug for the effort and generosity he put into a fantastic trade package. I look forward to seeing your reaction to the package you just received from me recently (finally!) and trying to up my game to pay you back for these latest goodies, especially that Greene autograph.
This was obviously a typically big trade package but I'll be back soon with a much smaller one courtesy of TCDB.
Posted by Dennis at 8:00 PM