On this very fall football Saturday highlighted by a win by my Wolverines to get the team to 7-0, I'm once again in a celebratory mood, so let's cap the day off with my latest TCDB deal!
I believe John, a.k.a. ravensray52, took advantage of the site's very useful trade-matching feature which simplifies getting trades going. Basically it gives you a list of everything you have available on each other's wantlist, meaning there's less time wasted if things don't work out. For that little effort, why not go for it and say "Here's everything we each need, what do you think?"? That's exactly what he did and the deal was history.
Besides the obvious former Baltimore NFL star John collects NFL die-cut and acetate sets, meaning he has excellent taste. A while ago I grabbed a couple numbered die-cuts at a show, I think for a dime or quarter apiece. He wanted those in exchange for seven cards that will be going to my Michigan Football RC collection and agreed that PWE shipping was acceptable so we quickly agreed to the transaction. Before I shipped his envelope I even managed to find a couple more die-cut inserts not on my trade list since I thought the trade was a bit lopsided in my favor.
A few days later these showed up in my mailbox: 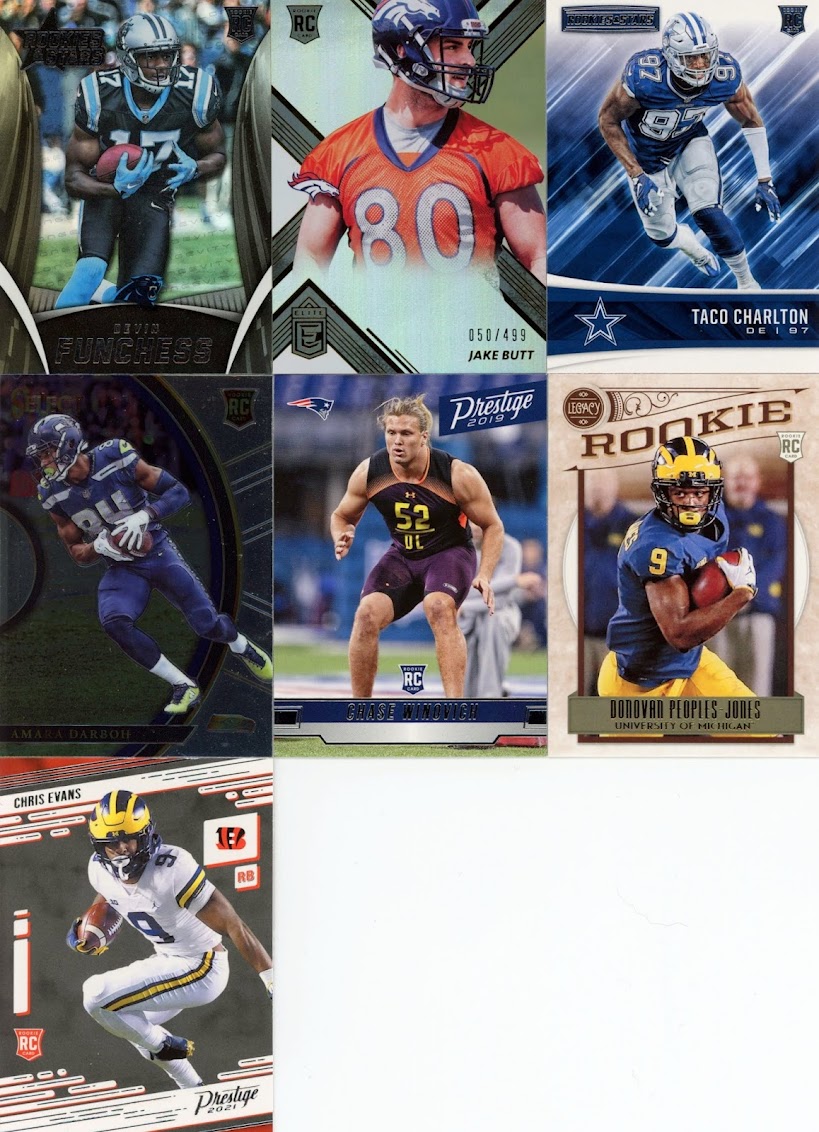 Devin Funchess: this 2015 Rookies & Stars Longevity RC is the shinier version of a design I don't tend to like, but as with Topps' Chrome it's an improvement. I now have 21 of his 24 first-years and 70 of his cards overall.
Jake Butt: the former star TE who had to retire due to injuries is seen here on his 2017 Elite RC which is also shiny plus numbered /499, not to mention a product with a design I usually appreciate. I've now tracked down 10/14 rookie Butts and 24 of his issues.
Taco Charlton: Vidauntae "Taco" Charlton really missed out on NIL stuff, didn't he? The former first-rounder has bounced around but suited up with Dallas as seen on his above 2017 Rookies & Stars RC, putting me at half of his 20 first-years and 14 total cards, most of which don't look this boring.
Amara Darboh: one of Michigan's more enjoyable recent WRs in my opinion, Darboh makes yet another appearance here courtesy of his rookie year 2017 Select card. It reminds me a bit of a couple of the Bowman's Best designs around the late 90s--in a good way--and is my 7th of his 13 RCs and 55th overall.
Chase Winovich: this is just my second card of the high-character edge rusher who epitomizes "relentless motor" and neither is a Michigan uni card, with this one from 2019 Prestige using a Combine photo. That's a bit of a letdown as that brand often pleases me with college shots, but beggars can't be choosers, especially as this is my first of Wino's 10 RCs!
Donovan Peoples-Jones: after totaling 2 TDs for all of 2021 the talented WR snagged his first pair for this season in last week's loss to the Cardinals. Michigan fans definitely saw hints of that talent as captured on the above 2020 Panini Legacy RC, the first of two straight Michigan uni cards, my 3rd of 17 I'm chasing, and 5th overall card of DPJ, which reminds me I need to step up my game in terms of his collection!
Chris Evans: every time I look at this 2021 RC of the former UM RB who scored against the Lions last week (as if that's difficult!) it makes me think of Elite, but it's actually another Panini Prestige design, one that again incorporates college photos, meaning it gets a thumbs up from me. It gives me two of his 10 first-years I've tracked to-date and represents card #3 of a guy who embodies Kid 'n Play more than Captain America. 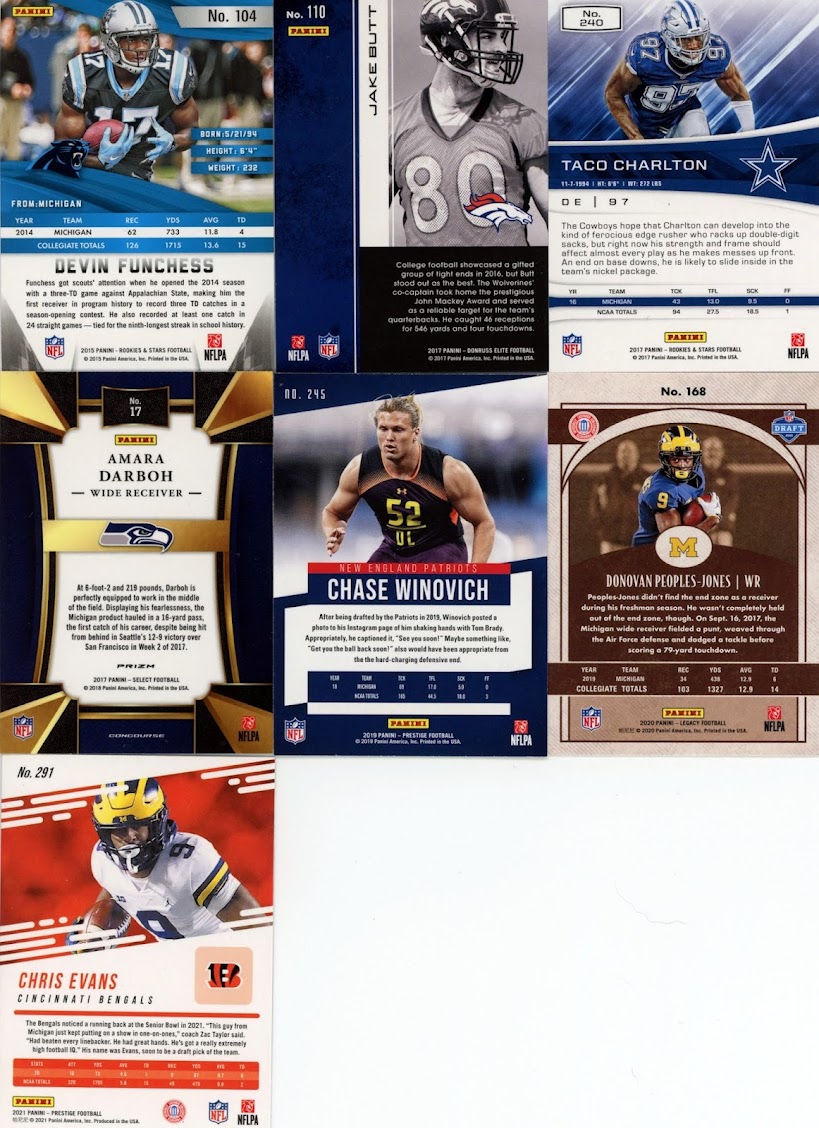 And here's the backs for those of you that like to see them.
Once again this was a great example of the kind of fun you can have with deals big or small on TCDB. Thanks, John, and GO BLUE!
Posted by Dennis at 7:54 PM