2021 eBay purchase: this George is gorgeous!

I'm just showing off one card today as I catch up on my most recent in-hand eBay purchase (with a multi-item buy coming soon!) and then I'll be back with another trade package.

This was the first of my buys from this month, about a week after I snagged the Zach Putnam plate I showed off recently. Considering the player here I was quite pleased to have spent almost half as much--$8.60 for the card and $12.83 total with tax/shipping: 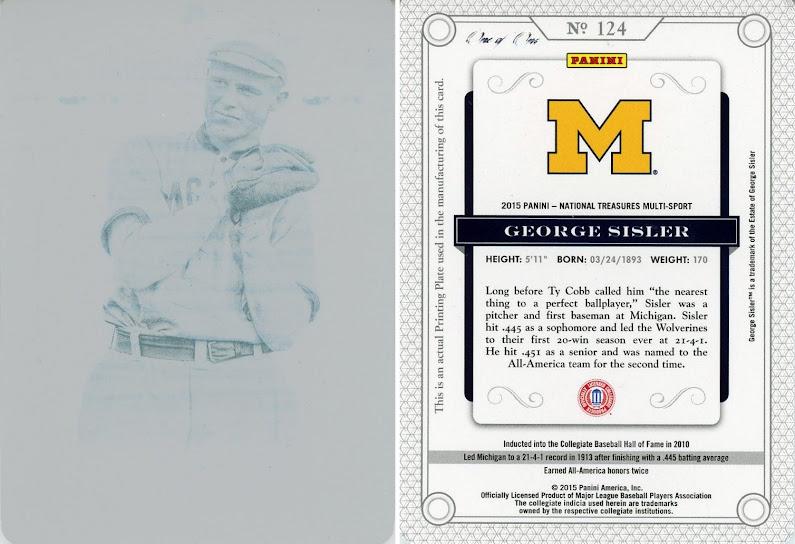 Well I'll be damned if that isn't a thing of beauty! What you see here is a cyan (pretty sure) printing plate of HOF Michigan Baseball alum George Sisler out of 2015 Panini National Treasures Collegiate. The "National Treasures" portion of the name renders the product way out of my price range, but naturally "Collegiate" piques my interest, so happily I was able to let someone else play the cardboard lottery and get this card on the cheap! 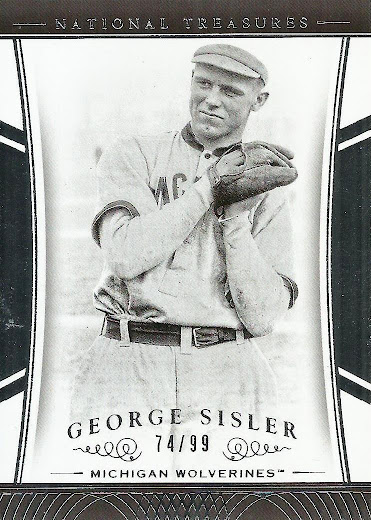 Here's a look at the base card (/99, as you can see here) for comparison. I love how Sisler's team is proudly stated up front: "MICHIGAN WOLVERINES".
As mentioned on the back, Tigers legend Ty Cobb thought very highly of the former Brown/Senator/Brave who hit at a .340 clip over his career, which included a pair of batting titles and the 1922 AL MVP. For some reason it took him four tries to make it to Cooperstown (1939), but then again I guess you'd say there was a pretty good backlog of legends since the Hall had only opened up three years prior.
The numbers he put up in Ann Arbor over three years (1913-15) were certainly a sign of things to come, and Wolverines coach-turned Browns manager Branch Rickey (a Michigan Law alum) was able to maneuver his former player's contract situation with the Pirates into a deal with Rickey's St. Louis club.
Besides being immortalized in MLB's Hall of Fame, Sisler earned entry into Lubbock, Texas' College Baseball Hall, as mentioned near the bottom of the card on the back. He's currently one of 11 "veteran (pre-1947 era)" players, and was elected in 2010, a year after Rickey. He joins Jim Abbott and Barry Larkin there.
The front of the plate, only being part of the image, isn't as exciting as the base card, but obviously it has the rarity factor going for it, and the back is still very cool. The write-up is nice and of course I love the large Michigan logo, plus the stamped script "One of One" is great. The overall design on the back (and base card front) makes it feel like a very sophisticated historic high-end product. My only quibble is that Panini declined to state exactly what color the plate is, which can be a big deal when they're hard to identify.
Overall this is an extremely cool piece to add to my collection at a very reasonable price, and it joins this Panini Hall of Fame plate from the previous year in my Sisler PC: 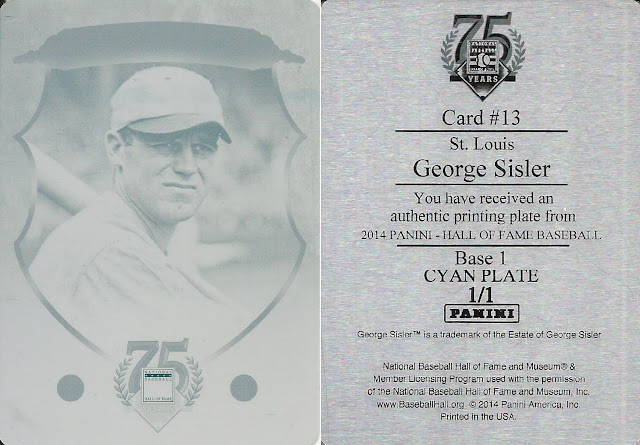 Now I just need to track down the yellow for each of them to get as close as possible to the maize and blue pairing!
With this pickup covered I'll be back soon with a fun new PWE from a reliable trade partner.
Posted by Dennis at 8:42 PM