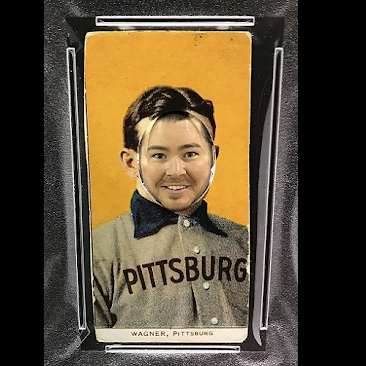 My second package that arrived last week came from buddy of the blog Paul of Scribbled Ink (more commonly on Twitter these days). He'd let me know that he found something interesting at an antique/thrift shop plus I knew of a couple cards he'd set aside for me. I can't say I was exactly expecting this, though!:

I'll have to admit, my first thought when I saw this wasWell, there were indeed some cards to be found: 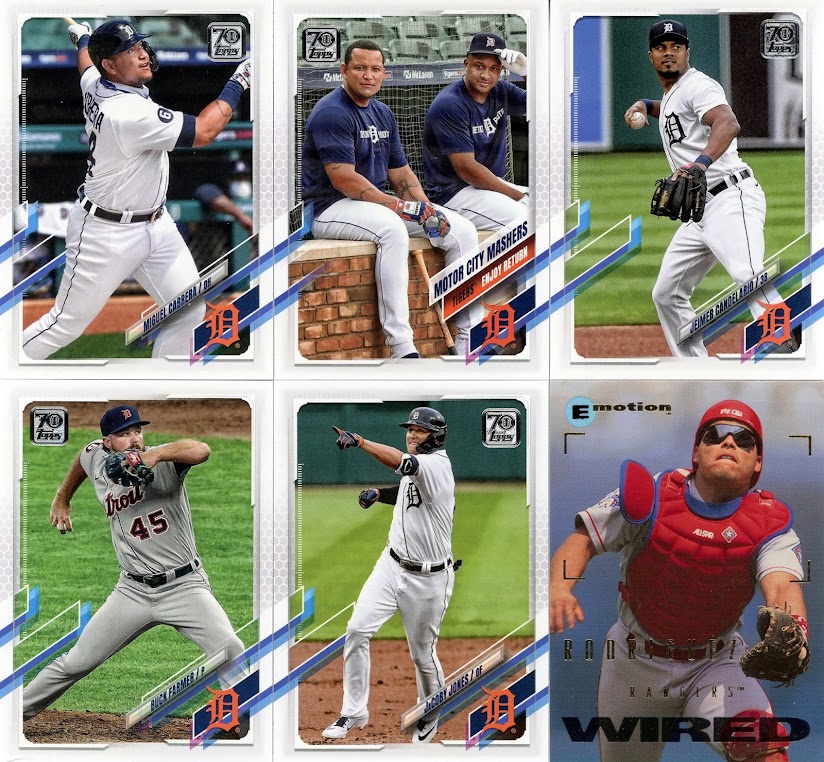 Here's a five spot of 2021 Topps Tigers. My collection of those was next to nothing because it wasn't like I was gonna go out and buy any packs, plus I didn't get into the dime boxes at the last show. Miggy is continuing his decline as most expected, but he'll still be fun to watch as he chases dual milestones of 500 HR and 3000 hits. One or both of this marks will probably need him to play until next season, but with Detroit in the midst of an endless rebuild there's not much reason not to play him! He's paired up with fellow "masher" Jonathan Schoop, who hasn't lived up to that moniker as much as say, catcher Wilson Ramos, in 2021.
Jeimer's been fairly reliable, though, and may be a rare example of a good outcome of an Al Avila trade. Is that possible? I hope to see that trend continue because the Tigers need all the bats they can get right now. Flipping over to the mound quickly, I was never really the biggest fan of Buck Farmer, so I wasn't terribly disappointed when he was let go recently. Paul's guy JaCoby is a player I do hope sticks around a bit longer, though, since he's a pretty good OF (if not a future top three guy) with a streaky bat but very good defense. I included the '95 EMotion Pudge here as he's in my collection of former Tigers and didn't fit in elsewhere. That was definitely one of Fleer's cooler 90s products. 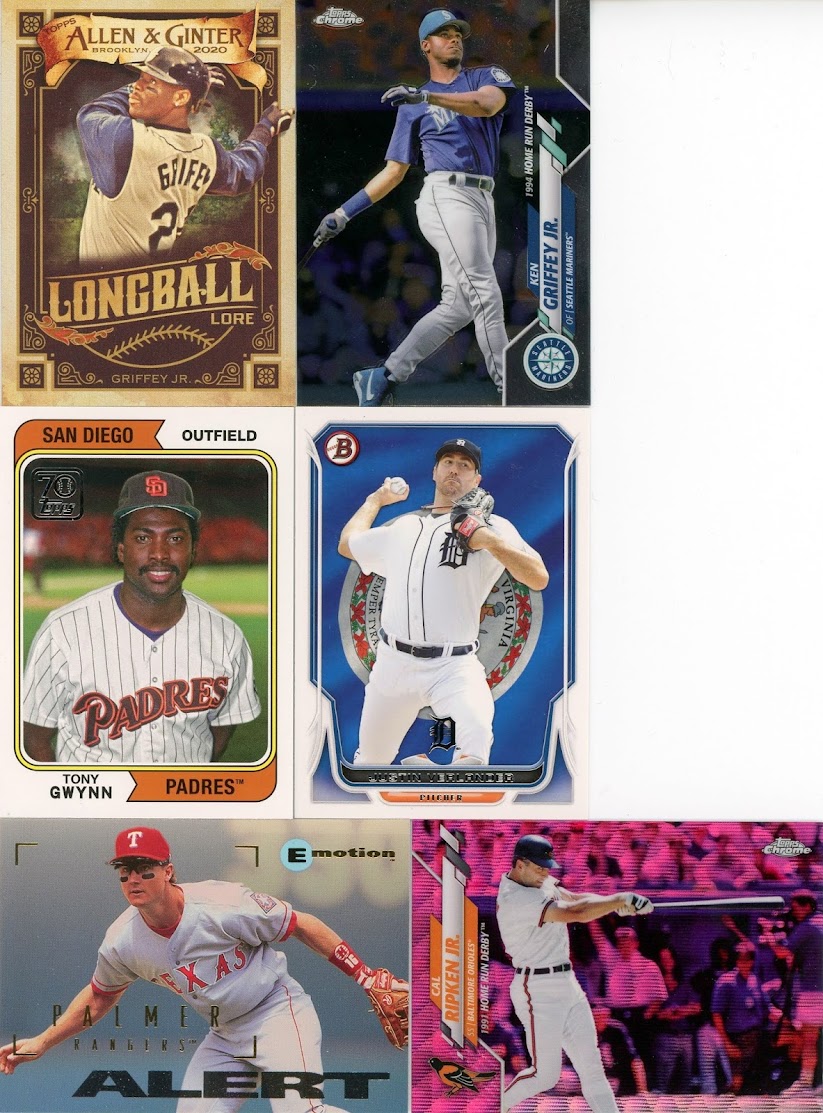 Scan #2 includes the PC guys. Griffey leads off this group, and Longball Lore is a good set to include him in since he's one of just nine players to reach the 600 HR mark. This A&G insert from 2020 mentions him tying the MLB record for consecutive games with a homer at eight in 1993 (with Dale Long and Don Mattingly the only other players to do so). Fittingly, the '20 Update Chrome card that comes next also has something to do with dingers, namely Junior's 1994 HR Derby performance, the first of three he won.
Moving on, Mr. Padre is part of Topps' 70th anniversary celebrations in its 2021 flagship product. This 70 Years of Topps insert of Gwynn is done up in the 1974 design and the back explains that the set was released in one series for the first time that year, which I didn't know. Next to him is a Verlander Paul asked if I needed, and I said yes because I wasn't aware it existed. 2014 Bowman's Hometown is a parallel that brings to mind the International and Interstate versions you could have found in the late 90s.
Switching over to the horizontal axis we start with another '95 EMotion example of another former Ranger/Tiger, Dean Palmer. I was curious about the use of "alert" up front, and the back states, "Despite 22 errors in 1994, Palmer showed good range at third." A Gold Glover he wasn't, but he could hit! Sticking with that side of the infield we see a 2020 Topps Chrome Update Pink Wave Refractor of the Iron Man. I think there's too many types of Refractors (and Prizms too!) out there, but I'm cool with both the pink and the "wave" pattern here. By the way, like his fellow Junior above, this one highlights a HR Derby, in this case Cal's 1991 performance. 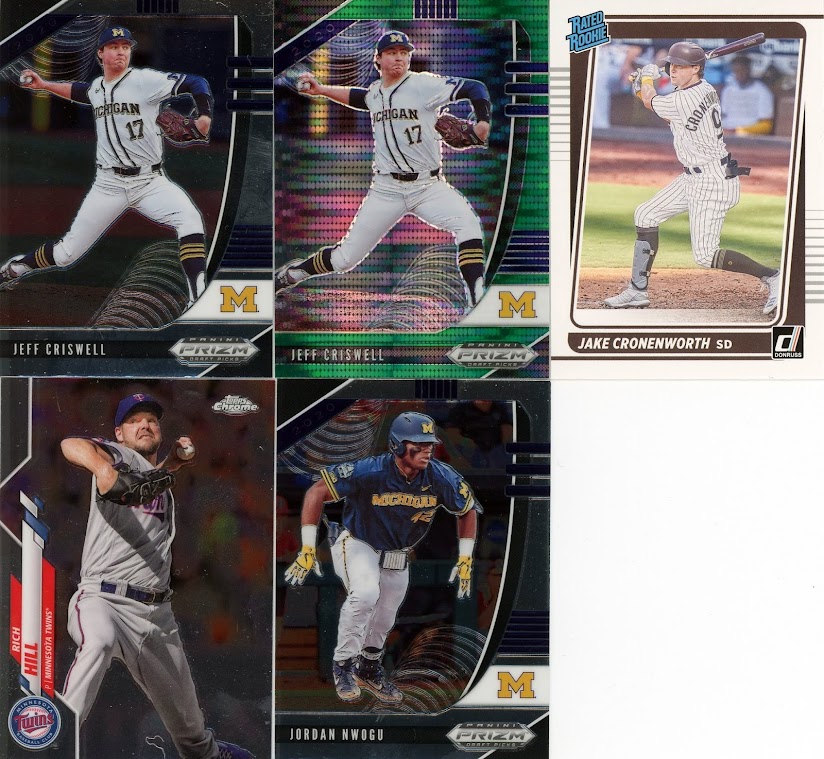 And last up we have the Michigan cards, three of which even feature Michigan unis--a relative rarity when it comes to baseball compared to basketball and football! My first Criswell card came from Jeff (and Sportlots) but was a Team USA card, so I'm a bigger fan of these 2020 Prizm Draft offerings: base and Green Pulsar (I believe). Very cool to see college action on a baseball issue like this.
Next, I was in on Cronenworth well before he surprisingly turned into a quality player after being dealt to the Padres, but his star turn has resulted in many more items than he'd previously had on his checklist, not to mention increased prices. That means I really appreciate Paul thinking of me with his 2021 Donruss base, one that stars the iconic "Rated Rookie" logo.
I should probably temporarily rename this blog "Too Many 2020 Topps/Chrome Updates" until I get 'em all because they've been doing a lot of work feeding my PCs. Dick Mountain doesn't have that many cards of his yearlong stint with the Twins, but this is one of them. He sure looked good making the Yankees bats look ridiculous the other night!
Finally, spark plug OF Jordan Nwogu makes his collection debut, joining former teammate Criswell out of 2020 Prizm Draft. The former walk-on was a blast to watch out of the leadoff spot, leading the team in batting average last year and enjoying the excitement of a College World Series final appearance plus getting chosen by the Cubs in the third round. He's a guy to keep an eye on to make lots of noise in the bigs and I'm excited to track down more of his cards.
Well that was a pretty exciting bunch of cards I think, so thanks Pau--
What?
A box that large, $11 in shipping, and there were only cards inside, you say? Yeah, I guess you're right, I should see if there's anything else...
Oh yeah, here's something else:

Remember Ken Griffey Jr., Bart? He's back! In Bobblehead form! This hand painted bobblehead (it's NOT A DOLL, MOM!) is a super cool piece to add to my collection, and I really appreciate Paul finding it, thinking of me, and anteing up to send it to me.
Let's open it up and take a look:

I would guess that Griffey was the main reason I became aware of San Bernadino, located in southern California. Young George Ken was the #1 overall pick in 1987, of course, and he'd play most of his second pro season with the Spirit, Seattle's A+ team from '87-'94 (and again from 2001-06). They've changed classes, names, and affiliations a few times since, but that's where he found himself for a chunk of 1988, and that year Best would make him #1 (a full year before Upper Deck) in their Minor League set for the team: 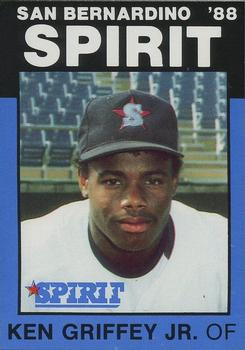 Of course, the following year he'd begin his illustrious career just two years after being drafted, and he wouldn't look back. But Spirit fans got to see glimpses of his greatness before that, so why not celebrate one of your franchise's greatest alumni with a bobblehead? The Spirit did exactly that, and as far as I can tell this bobblehead was given out in 2001. Overall I consider it to be a very nice looking piece that's in great shape, plus it's even somewhat limited--this one is stamped "4078/5000" on the bottom. That it's complete with the packaging is icing on the cake, but I'll likely display it with my other bobbleheads freely because I like doing that. This is a very cool surprise indeed!
Paul, thanks for the cardboard and, uh, hand painted surprises that were perfectly targeted at my collections! I tip my cap to you for putting in the effort to find stuff for me, not to mention going out of your way to ship it to me. Hopefully with another couple shows on the calendar soon I'll be able to return the favor!
Speaking of trade packages another one arrived today, so I'll probably show that off soon in between a recently arrived eBay purchase and another that should ship soon. A steady stream of incoming cards is certainly keeping me busy!
Posted by Dennis at 3:54 PM