In my last post I teased a trade package from a "reliable trade partner" and now you know exactly who I meant: Matt of Matt's Wonderful Blog of Hobbies! If the blog name sounds a bit unfamiliar to you that's because it had mostly been named "Sport Card Collectors" for a while. (Also, you probably know Matt's other project, Cards Over Coffee, especially if you follow him on Twitter.) I know a bit about changing up a title for various reasons, and in Matt's case I think it was part of a fairly comprehensive refresh of that blog, which is pretty cool.
Anyway, he'd recently lamented not having sent me anything yet this year in a comment on one of my posts, though I don't think he should feel particularly bad about that after the bonanza he sent me around Christmas! But either way, he managed to put together a brand new PWE for me that arrived just the other day, another Tigers/Wolverines special that hits the spot on this lovely mid-May evening:

Let's start with the Tigers, comprising three parallels and an insert. First up is Castellanos, who had a bit of at professional baseball-ruiner Rob Manfred's expense recently. It took me a bit to confirm it to be the Black Foil version of his 2019 Stadium Club issue, with the main difference between it and the base being, not surprisingly, the small amount of foil up front done in black. It's a typically nice Stadium Club look, though I'm not a huge fan of the font used for the player name. Compare that to the brand's Chrome version from last year and you'll see team/name design elements I like a bit more. Also, that happens to be an X-Fractor of C Jake Rogers, one of, I dunno, 10? backstops currently with the team. He called a nice game in a strong start by top prospect Casey Mize last night, and that connection may allow him to stick around even if his bat fails to develop.
Speaking of pitchers, moving down to the second row we go all the way back to 2014 with a Topps Chrome Gold Refractor of Anibal Sanchez (#36/50). After parts of seven seasons with the Marlins (including tossing a rookie-year no-hitter in '06) he came to Detroit and put up a pair of good-to-great seasons in 2013-14 before steadily declining. Here you can see him in gold, the color of the ring he earned with the Nats in the 2019 World Series. His former teammate from 2012-17 when they both left the club, Verlander, also knows something about no-hitters and World Series rings. But that was all in the future when his 2005 Topps Chrome auto was packed out. That 2021 Topps Through the Years insert, which is a card of a card, is not signed by JV, but I'm fortunate to have grabbed the pictured item for something like $20 years before its price exploded, and it's served as the background image for this here blog for a while, though you can't really see it since I widened most of the blog elements at some point. Trust me, it's back there! Here, it'll be easier to see this way: 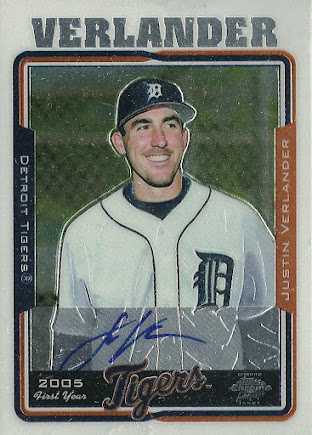 Aaaahhhh, nothing like a real image instead of a mock-up to get the full effect.
Anyway, now we'll switch mascots over to the Wolverines for a pair of football cards. #1 is a Glossy parallel of former LB/DL Tim Jamison (UM 2005-08) out of 2009 SAGE HIT. I know the scan doesn't show it but this thing is super glossy, which is nice since sometimes that type of parallel can be questionable. Anyway, Jamison managed to appear in 56 career games for the Texans, which is not bad for an undrafted guy. A player with a bit better draft stock is OL Cesar Ruiz, a former top C recruit who put in three very good years for Michigan, pretty much living up to the hype. The Saints nabbed him 24th overall last year they seem to see him as a guard, which I'm sure he has the talent to play. Matt sent me my first card of his, a 2020 Donruss Optic RC that features the man in his college uni, which kicks all kinds of ass. According to my checklist I have another five first-years of his to track down, which isn't surprising since I haven't made much headway with the 2020 draft class yet. I hope to build on this initial card soon! 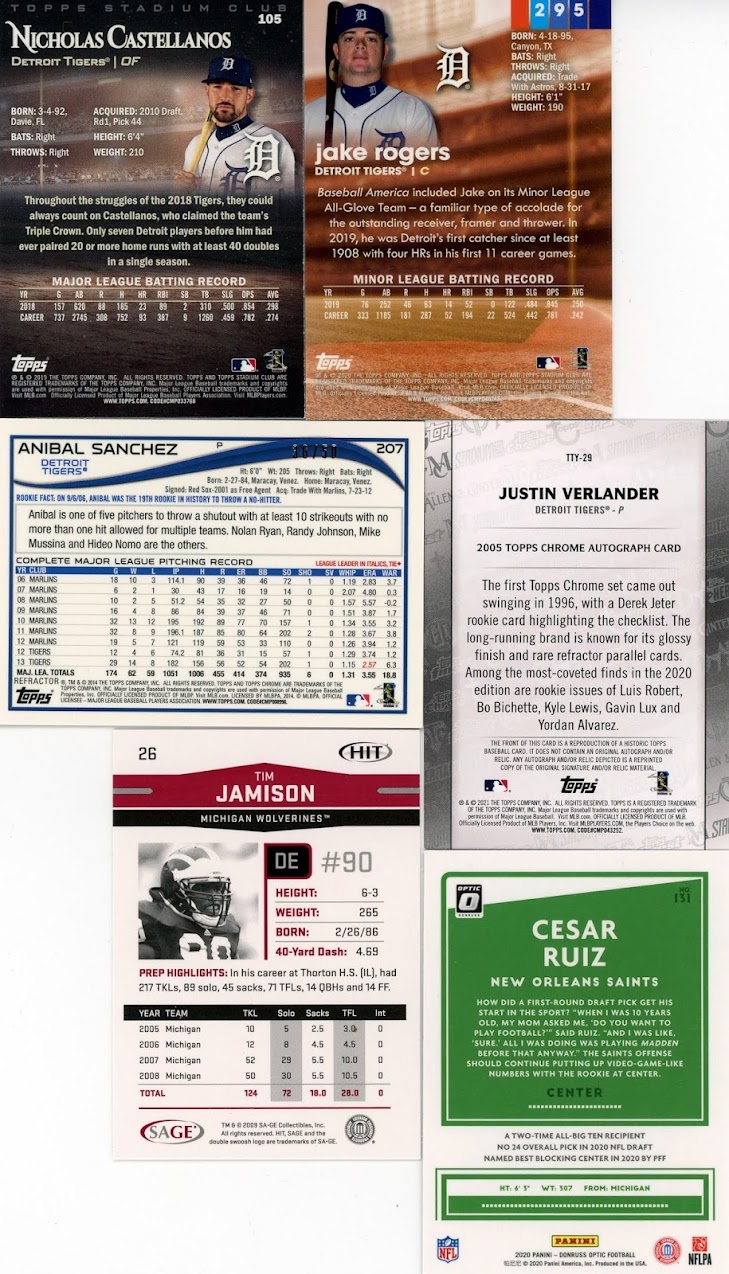 Just six cards to scan, plus a few of them needed images on TCDB, so here's the backs.
Matt, thanks for getting a new PWE out to me, not to mention one as exciting as this one! I have a few things set aside for you from the show I got to a few weeks ago and will be waiting until I get to one or both of the ones coming up over the next few weeks before sending them out to you, but I think you'll appreciate this fan of "go blue" sending you some "big blue".
Posted by Dennis at 7:24 PM