It's definitely been a long road--more than a year, in fact--but thanks to getting vaccinated recently I finally felt ready to head back to my usual monthly card show in Taylor this past Friday. Besides the fact that I almost always enjoy the experience of poring over boxes of cards for couple hours to bring home new stuff, I was really itching to go to grab some new trade bait. The online sources that used to treat me so well are less and less useful these days, and nothing can replace seeing cards in person, deciding you want them, and taking them home immediately--no astronomical shipping costs or USPS chaos, just instant gratification. I think you all know I love sending cards out as much as having them come into my collection, and shows are probably responsible for the majority of that trade fodder.

So I headed to Taylor early Friday afternoon and was relieved to see my favorite seller there. I ended up solely looking at the guy's $1 boxes because there were so many 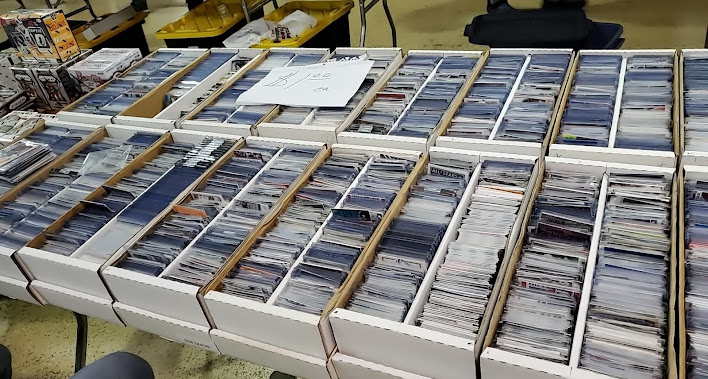 (everything you see here, plus a few more to the right) and because I only have so long before I decide I've had enough. I love me some dime and quarter boxes, but this guy usually has $1s and $2s, and this time it was all dollars, so there were bound to be some good finds in there.

Roughly two hours later I came away with 70 cards from these boxes: a few keepers for me, a few for general/TCDB trade bait, and a healthy bunch for some of my favorite trade partners! Boy does it feel nice to be able to say that.

Here's a quick recap of the stuff that's not earmarked for anyone specific (available for trade!) and what I kept for myself: 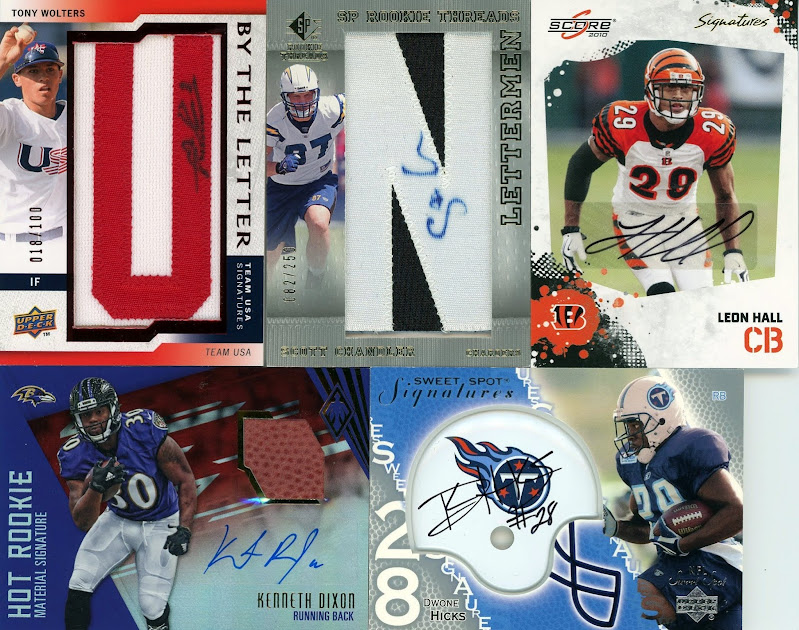 This is the kind of stuff I love finding for a buck because either someone jumps at it and wants to trade for it, or I don't mind it sitting in my trade box as some pretty nice ammo for a future deal.

Wolters is an autographed letter patch (the "U" of "USA") from 2009 UD Signature Stars and is #d /100. Chandler is the "N" from his name and is also a signed manupatch, #d /250. I wasn't sure if I had the Hall 2010 Score Signatures auto but I did so I figured a fellow Michigan collector or Bengals fan might like it. Dixon is a football/auto from 2016 Panini Phoenix and is #d /199. And Hicks is a manuhelmet auto from 2003 UD Sweet Spot.
If you'd like to claim any of these, please throw a comment down below or shoot me an email and I'll be happy to work something out with you!
And now, onto my haul: 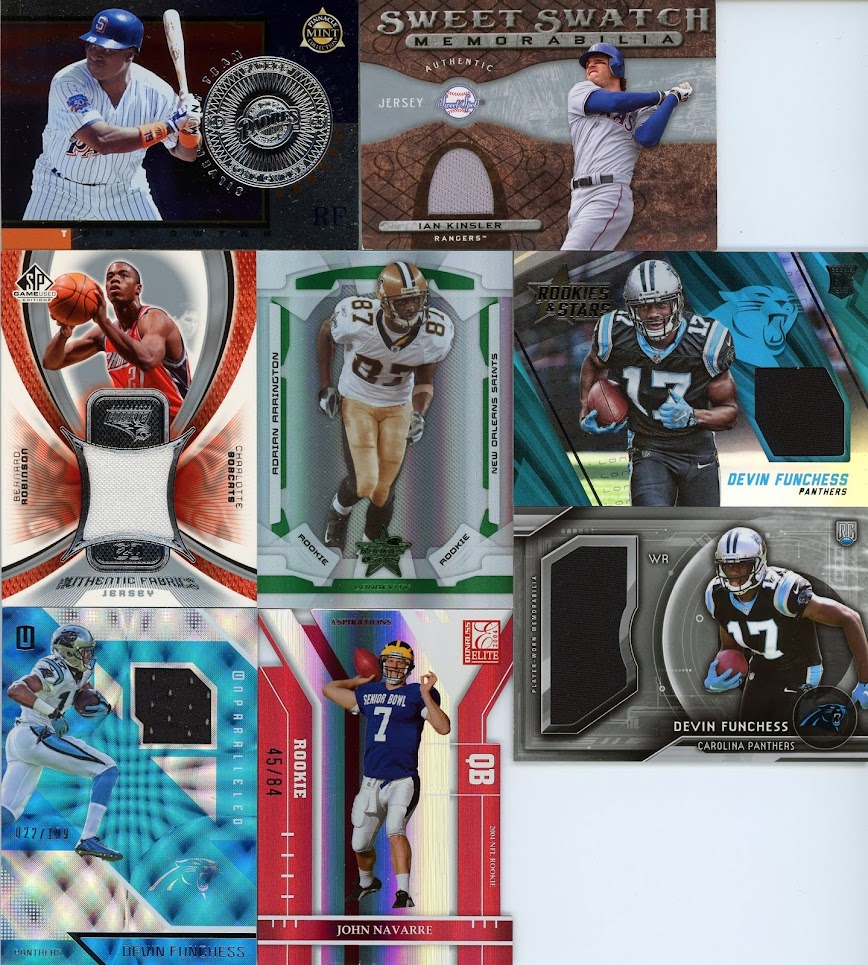 Let's start with Mr. Padre. Gwynn's a '98 Pinnacle Mint Silver parallel of the non-die-cut base card (which was bronze), and a great example of "90s inserts rule!". I probably could have found it cheaper elsewhere, but $1 seemed reasonable to me and now I don't have to wait to get it.
Kinsler put up four nice seasons in Detroit and was fun to watch, plus he helped wash the stink off of the Prince Fielder contract debacle. I happily paid a buck for my second jersey of the star 2B, though as with the one I already had he's pictured here with the team for whom he's most well know, the Rangers. Maybe I'll track down a Tigers hit at some point.
I would have sworn I had that 2005-06 SP Game Used jersey of former UM cager Bernard Robinson, but as it happens the other five cards I have of him are signed so it's actually my first relic of his. I have Maurice Taylor's jersey from the same set, and a quick look at the checklist makes me think they're the only Wolverines I needed to track down.
On the football front I found a couple cool Panini-branded rookie parallels I liked. Arrington is from the fairly confusing 2008 Leaf Rookies & Stars Longevity set (not the Longevity parallel of the regular R&S product) and is an Emerald parallel numbered /49. His collection is inching closer to the century mark so I always appreciate finds like that. Former UM QB John Navarre is next with an Aspirations parallel of his 2004 Donruss Elite RC, numbered /84. The red die-cut inserts look excellent, plus the Senior Bowl photo makes it a quasi UM uni card since he's wearing the greatest helmet in college football. I've previously tracked down fellow QB Drew Henson from the same set.
And we'll finish up this post with a fun trio of relics of former TE/WR Devin Funchess. The top-most on the right is from 2015 Panini Rookies & Stars, and the set is called "Longevity Rookie Jerseys" but the good news is there was no separate Longevity product that year, so no confusion there! Below that is a Topps Rookie Jumbo Relics jersey from the same year. And on the bottom right you'll find my favorite of the three out of 2016 Panini Unparalleled. Yes, I'm a sucker for shininess (and serial numbering--in this case /199) but in my view it easily has the best design, doing lots with Carolina's team colors. The R&S card is second for using at least some of the franchise's colors, and Topps is last for using various shades of gray that wouldn't be out of place in a February sky. These additions give me 10 Funchess relics and 18 hits overall.
Like I said, it was fantastic to get back to a card show after a layoff of more than a year, and I'm gunning to go back next month to see what that'll bring. I may have to continue skipping buying some needed supplies--mainly toploaders for my thicker cards--until they become more reasonable, but I'll be ready to hit those boxes once again to dig up some hidden gems and trade bait. And speaking of the latter, some of it may be heading to your mailbox as you read this!
Posted by Dennis at 3:25 PM