Happy baseball games are back day! The Tigers won and the sport we all love is gearing up to return as the weather (hopefully) warms up. Let's celebrate with some cards of that very sport.
About two months after his Christmas Eve birthday I happened to find a pair of PWEs from Gavin of Baseball Card breakdown in my mailbox earlier this week. That was a fun surprise for sure, and it sounds like he was grateful that I included him in my recent tradition of sending out Christmas cards: 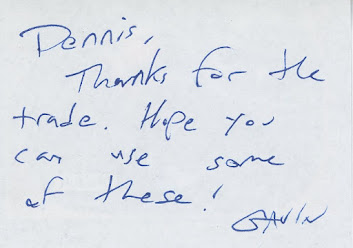 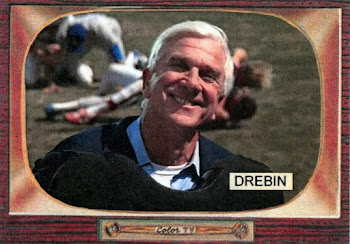 HEY, IT'S ENRICO PALLAZZO! Is it really a trade package from Gavin if there isn't some sort of custom action going on? This Naked Gun-inspired card of Leslie Nielsen's most iconic character isn't printed on regular card stock since he just used it for a brief note, but I'll keep it with the other customs I've accumulated from him and others over the years regardless.
And on a somewhat related note, here's what was in the pair of envelopes (spoiler alert, I needed most of them!): 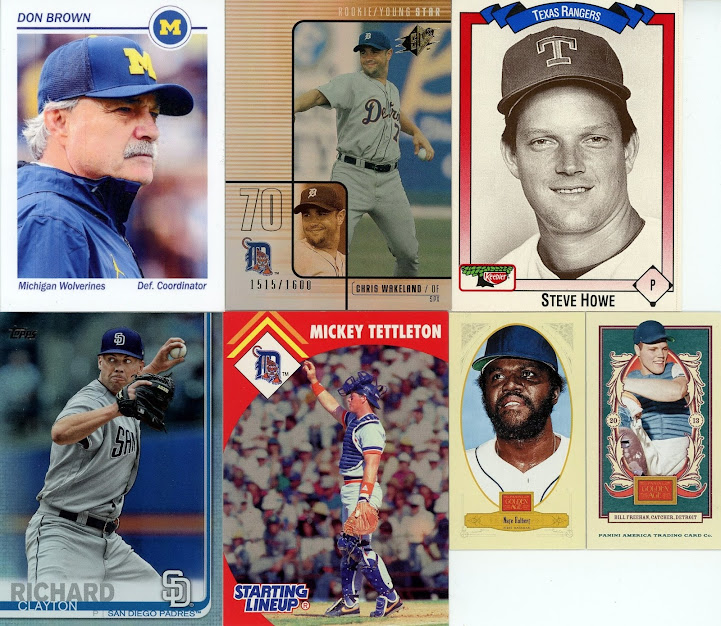 First up is a corrected version of a very cool custom Gavin sent me for Christmas 2019 starring former UM defensive coordinator Don Brown. He was nice enough to fix it after accidentally spelling Brown's first name "Dan" a couple times and send it to me now. The Wolverines ended up letting Brown go after the 2020 "season" due to increasingly bad defenses, but he was still fairly successful at the school, not to mention a fun personality, and I wish him luck in his new role at Arizona. Thanks again for this, Gavin!
Former Tigers prospect Wakeland's 2000 SPx card is a fun reminder of how much I love that year's iteration (up there with the '96 and '97 versions for sure), even if chasing numbered RCs wasn't for me (as in buying them--I'm happy to get them in trades!). I own the non-numbered Update cards and might try to grab the main base at some point because they're nice to look at.
Gavin managed to hit three of my PCs with new cards in the form of an oddball Keebler Rangers of Howe, Topps Rainbow Foil of Richard, and Starting Lineup card of Tettleton. All three are great as they knock off needs, and I think I'm most excited about the Tettleton since those SLU cards don't tend to be cheap, plus it's got a great looking photo of Fruit Loops wearing the tools of ignorance.
There's also a couple interesting Panini Golden Age minis here. PC guy Bill Freehan is the 2013 American Caramels Blue back which I already had, but that will find a happy home with John who's likely excited to receive another item of a guy we both collect. Meanwhile, the other is of Nate Colbert, a guy whose name you may have seen a few times on Card Hemorrhage. His 2012 Broad Leaf Brown back doesn't list a team but some seem to think he's shown as a Tiger and I'm glad to accept that. Colbert came to Detroit in a four-player trade in late '74 and then played 45 games there before being bought by the Expos, bouncing to Oakland, and retiring. His count of Tigers cards is minuscule so this is a pretty cool way to add him to my collection! 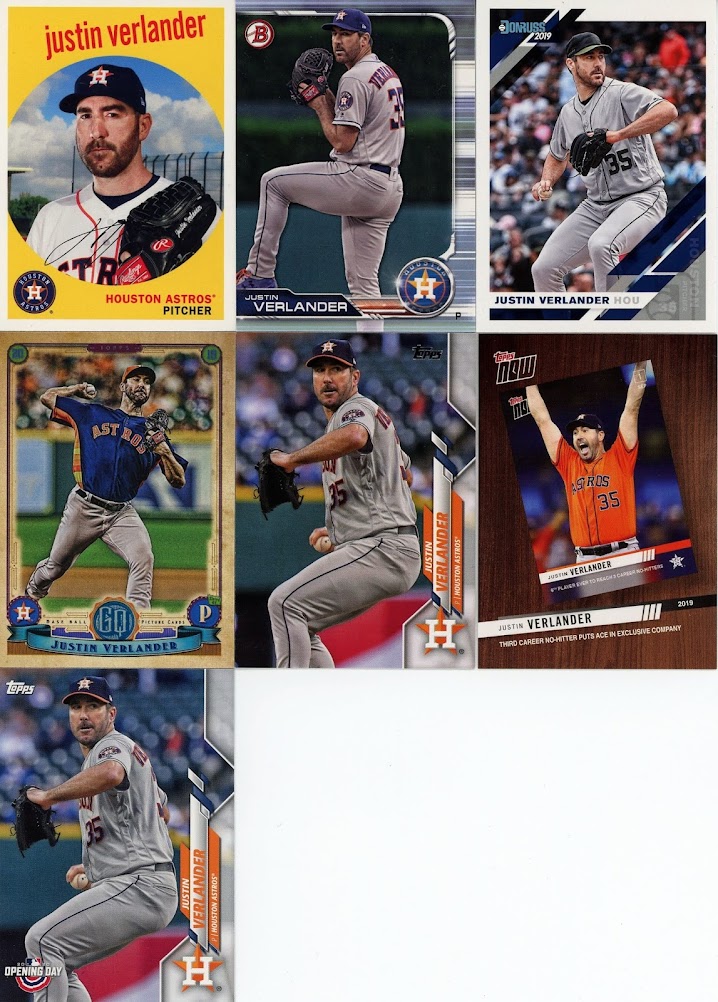 The theme of the rest of this post is, creatively enough, "Too Many Verlanders!" The BCB dude sent me 11 cards and I needed 10 of them, with the lone dupe being card #2 above, a 2019 Bowman base I snagged from Baseballcardstore.ca and haven't posted yet. That, too, will find a good home.
Everything is from 2018-2020, which means Astros cards, and that's great because I have a lot fewer of JV's cards from those years at this point, meaning they're great fodder for trade packages heading my way. Brands here include Topps Archives, Donruss, Gypsy Queen, flagship Topps, and Opening Day. I don't get Topps' recent thing with cards featuring images of other cards, but that's Topps for you.

The horizontals look quite nice, as cards often do in that orientation. These include Big League (2018 and 2020) bookending Update and flagship. The Update card is the 2019 150th Anniversary stamped parallel and the second Big League issue includes 2019 teammate Gerritt Cole and rising star Shane Bieber. That '19 Astros team was crazy successful (for reasons that are now apparent) and still managed to lose the Series to the Nats.
The healthy stack you see here got me up to a solid 465 cards (second place on TCDB!) of the former Tigers ace in my never-ending quest to own too many.
Thanks for the double dose of PWEs and customs, not to mention the other great stuff, Gavin! I appreciate you hitting multiple PCs including a bunch of the guy in my blog's title, not to mention some really useful stuff of the other guys. I'm not sure when I'll have cards for you next but as always I'll work on a pile until it makes sense to ship it out west to you.
Posted by Dennis at 6:36 PM