Happy Sunday, everybody! I'm feeling good having been able to get some stuff done this weekend, plus Michigan took down Ohio State in basketball earlier this afternoon, so it's been a pretty good day. How about celebrating with my latest mailer from Sports Cards From the Dollar Store?
Speaking of celebrating, this is package #40 from one of my favorite traders that I'm featuring on this here blog (he got up to 56 on Too Many Manninghams, though there was some overlap there too). Doug managed to stuff a bunch of great cards into the last package he sent me, the one that included a couple sweet 8x10 autos, and somehow he still had enough to fill out a fat bubble mailer.
Thankfully he finally had some cards to show off from me, posting those not long after his birthday on 2/14. But I've got lots of catching up to do, as you'll see after taking a look at what he sent this time: 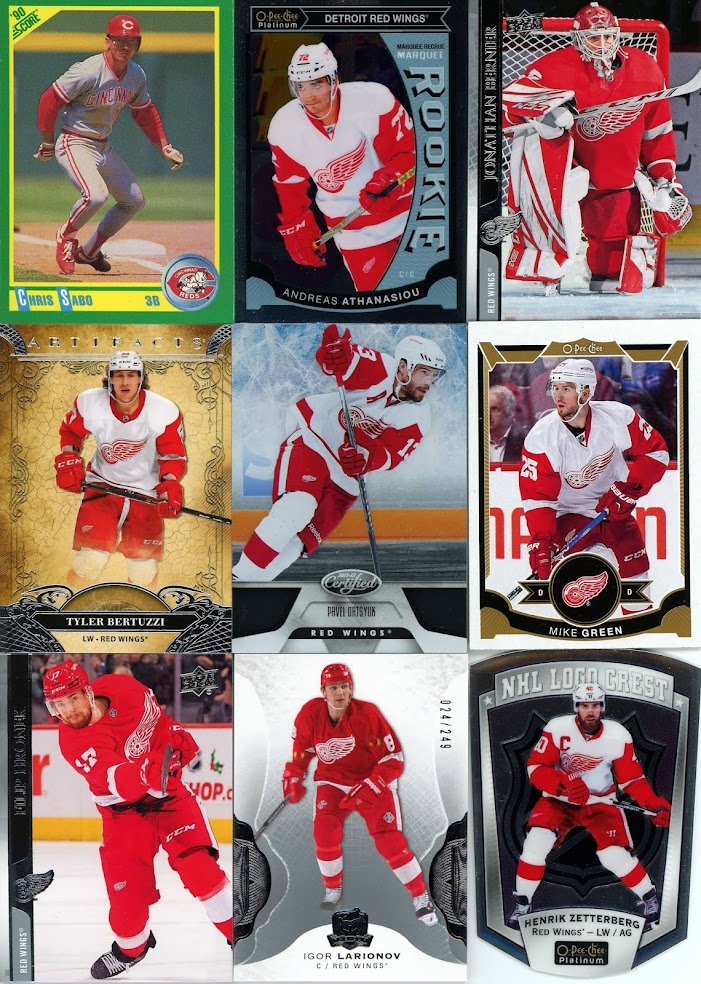 A Sabo base from the year his Reds won it all is the only baseball content today, but the team's name goes well with the next bunch. The last few years of Red Wings squads are a far cry from the glory days of teams helmed by the likes of Datsyuk, Larionov, and Zetterberg, but with Stevie Y in control, I have a feeling Hockeytown won't have to wait as long to celebrate with the cup as we did when 1997 rolled around. Igor's card is a suuuuper thick numbered base from UD's very high-end The Cup product. Also, I like the die-cutting on Hank's OPC card, but I'll be damned if these aren't a pain in the ass to try to position to scan since there's no straight edges and they spin around on the glass like it's an air hockey table! 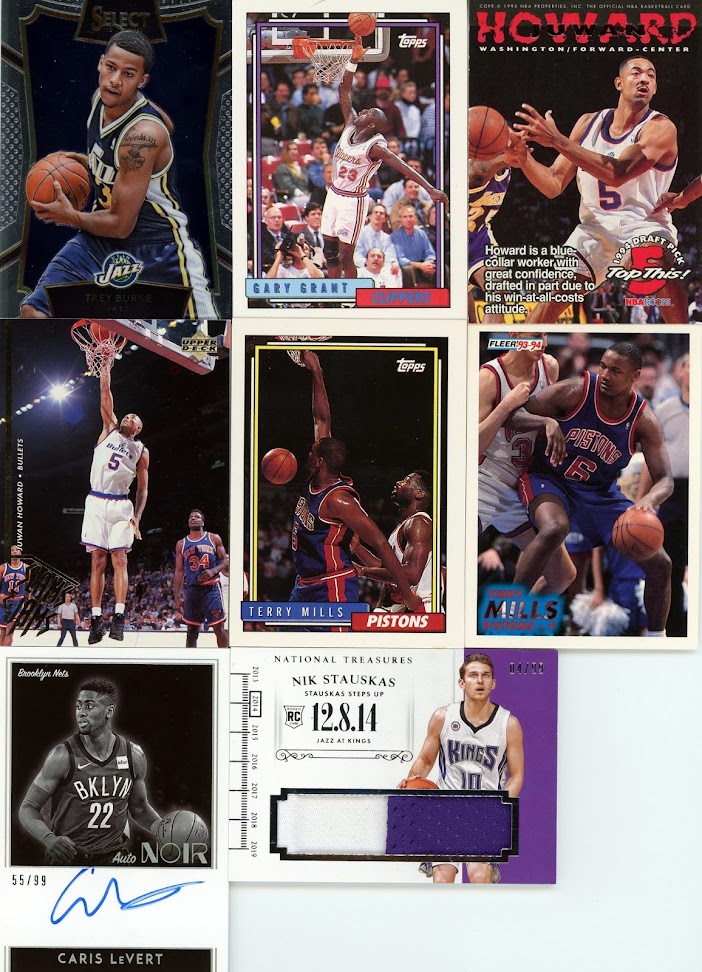 Now we'll move on to the team of the hour (or the year?). Coach Juwan Howard, seen twice here, has done an amazing job to get the team where it is today, with just one loss, multiple impressive wins, and a likely 1-seed. The well-travelled Burke is always nice to see, and Grant's appeared in more than a couple Buckstorecards packages. "Sugar" Mills is one of the Pistons I remember from back when I actually used to watch pro basketball (mainly during the Pistons' heyday) and I liked him before I knew he was a former Wolverine.
The hits here are also typically excellent. Just my second LeVert (and Doug also sent me the first one, which is gonna be hard to top!) this Panini Noir looks really nice in-person, with the black & white image popping like crazy. That's a really nice pair of a talented young player. And then there's a very sharp, large two-color swatch featuring Sauce Castillo, hailing from Panini's high-end National Treasures. Nik, who's travelled about as much as Burke, is more common in my collection as this is card #10 in the hit collection (five each of relics and plates, if you can believe it). A hell of a pair from Stauskas' fellow Canadian! 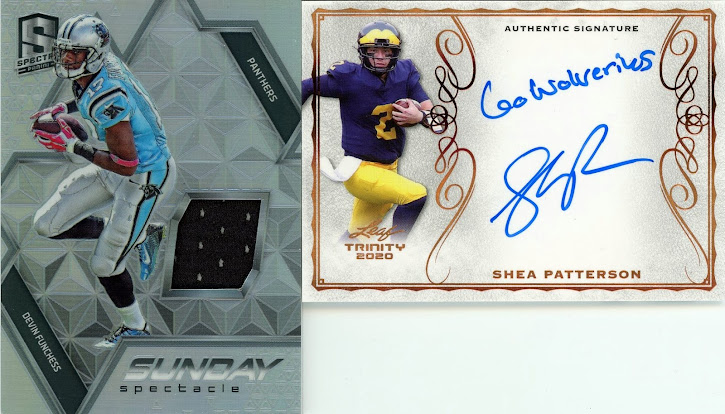 If football wasn't represented by quantity this time the quality made up for it in spades. First is a Funch jersey on a Refractory/Prizmy 2016 Spectra card. Numbered /199, it of course shows him with the team that picked him, Carolina, but we'll see what he does next season after sitting this one out. This is Funchess hit #15 for me, by the way.
He's followed by a guy who probably won't ever see time on an NFL playing field, but that's fine because I love my college cards! Transfer QB Shea Patterson signed this 2020 Leaf Trinity card with a "Go Wolverines" inscription, making this kind of product even better for a collector like me. Just my second hit of Patterson (the other's also an autograph) this looks terrific and now I want to go out and find more Trinity cards of my PC guys! 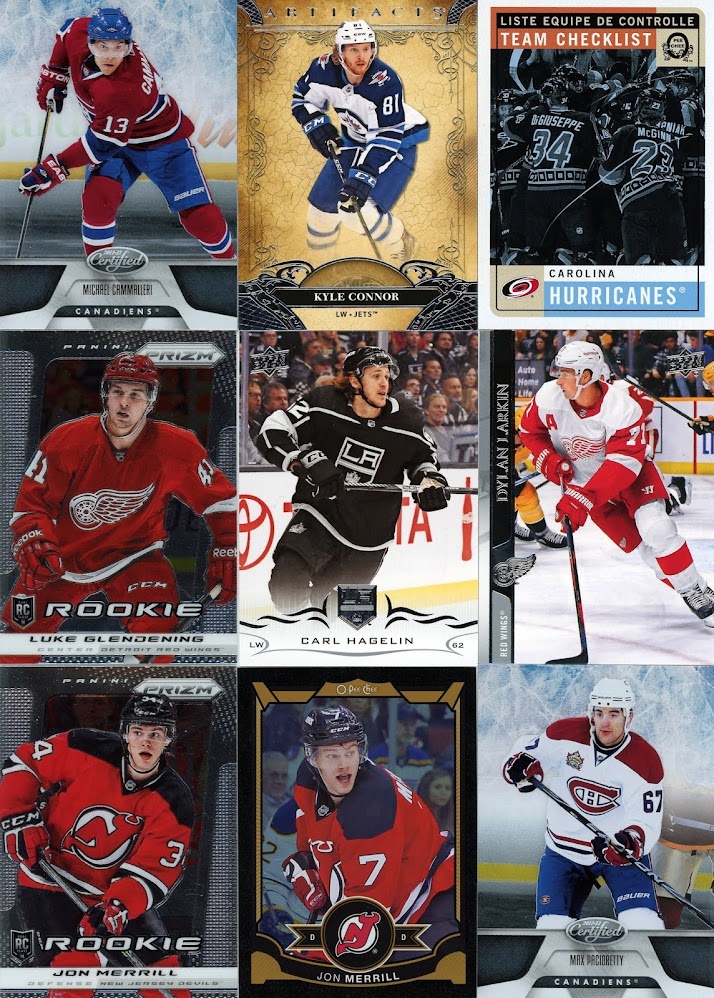 And as always we'll end another enjoyable SCFtDS post with the Michigan Hockey content, which consists of two scans this evening. Here we have a nice mix of base and inserts. Former Habs teammates Cammalleri and Patch bookend this bunch with some shiny Certified base issues that don't quite reflect how, um, reflective they are, but that's no problem since that means they scanned nicely! Connor is from UD's Artifacts, a brand that's given me trouble in its past football iterations but plenty of nice stuff when it comes to icers. While he's not the lone subject of that Hurricanes team checklist, Wolverine Phil Di Giuseppe's name is prominent on the card so to his collection it'll go. Wolverwing Glendening and D-man Jon Merrill below him hail from a Prizm update set and both are RCs, so I got that going foo me. Hagelin and another Wolverwing, Larkin, highlight the textbook excellence of UD's photograph and design. And lastly, a second Merrill enters the mix--a numbered (/100) OPC black parallel that looks really nice with the rainbow effect plus the border. 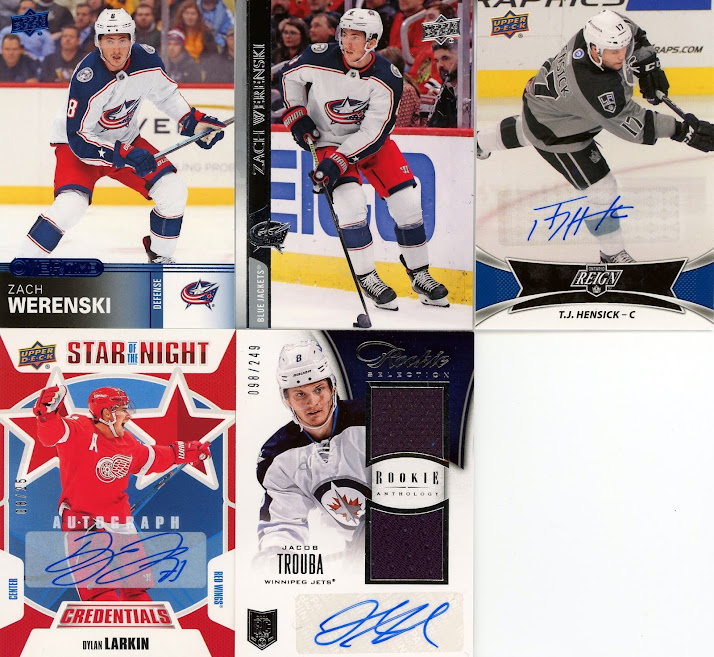 Young star Zach Werenski, who's in his fifth season in Columbus (barf) and scored 20 goals last year, is the last subject before we get to the hits, and he appears on a Blue parallel from UD's Overtime product plus the flagship set as well. Remove the logos and you still know you're looking at an Upper Deck hockey card every time.
And then we have three more hits to admire in a package full of them. #1 is a 2016-17 UD AHL autograph of former star C T.J. Hensick, another card that embodies UD's pleasing look. I got to see pretty much his entire college career as a season ticket holder and I can tell you he was one of those guys who was absolutely electric, sometimes taking over a game by himself when the team needed him. Somehow this is only my second hit of his so I definitely value this one highly.
#2 is the undisputed highlight of this package for me. Dylan Larkin is my favorite current Wolverine in the NHL and it doesn't hurt that he happens to play for the Wings as well. As a young star his cards are understandably expensive so I'm glad to score an autograph of his here and there. Getting this UD Credentials signature limited to just 25 copies, then, is absolutely insane! Doug's now responsible for two of the three Larkin autos in my PC, and if that doesn't say something about his generosity then I don't know what does. What a sweet card!
And finally, we head over to his beloved Anthology product, the 2013-14 version. Doug busted a bunch of this stuff in an effort to complete some of the various sets, and to his credit he was able to finish up the dual jersey auto RCs like the Trouba you see above, quite and accomplishment. I believe this one was a dupe for him from a later box break, and I really appreciate him sending it my way since he'd be well within his rights to sell it to recoup some of his investment. Instead, though, he was nice enough to make it my 14th Trouba hit (many of which came from him), half of which feature the young star's signature. It would have been a tall order topping the sick-nasty patch auto he sent me last month, but this is just as high-end as the rest he's sent me over the years.
Doug, once again thank you for sending me some prized new items for my collections! Please feel free to take a breather while I work on paying you back. I'm glad to say I have at least one thing in the works I think you'll like, and I'll keep working on a return. In the meantime, I hope you had a great birthday and that you're having a blast with Mischief!
Posted by Dennis at 9:32 PM