With a few things definitely on their way to me I decided to get off my butt this weekend and get things ready for part 2 (here's part 1) of my baseballcardstore.ca order. This one's all baseball, and that bunch came in at nearly 200 of the 251 cards I received, so you'll see a mix of scans and photos (both poorly done!) as I decided to show off all of them: 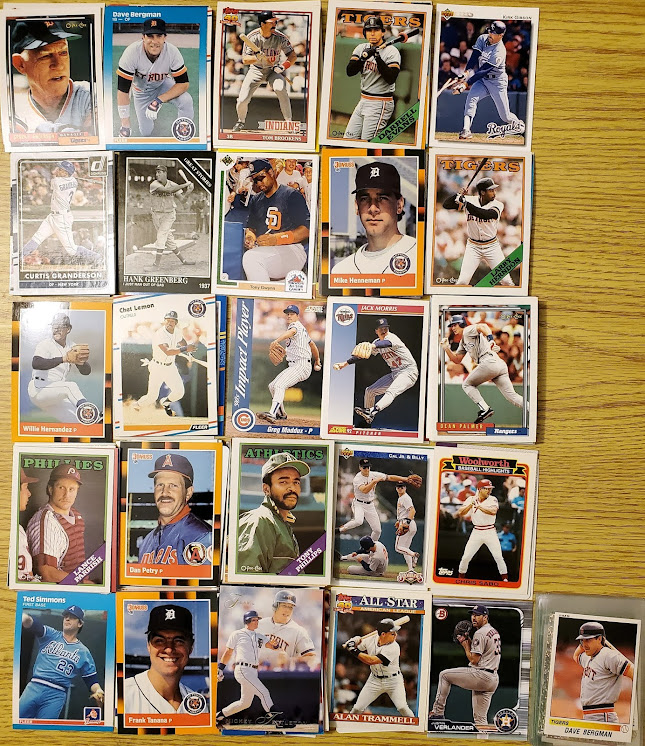 Here's the stacks (with single cards in some cases) for all of the players, plus a 26th pile for stickers and smaller stuff. As usual my photograph skills are lacking when it comes to trying to group stacks of cards in straight lines. Anyway, I believe this came out to 26 different players, with the last one somewhere in that final stack. Once again, I grabbed pretty much everything I needed of a bunch of guys I usually collect, and even some I don't traditionally chase since, hey, they're just a dime! 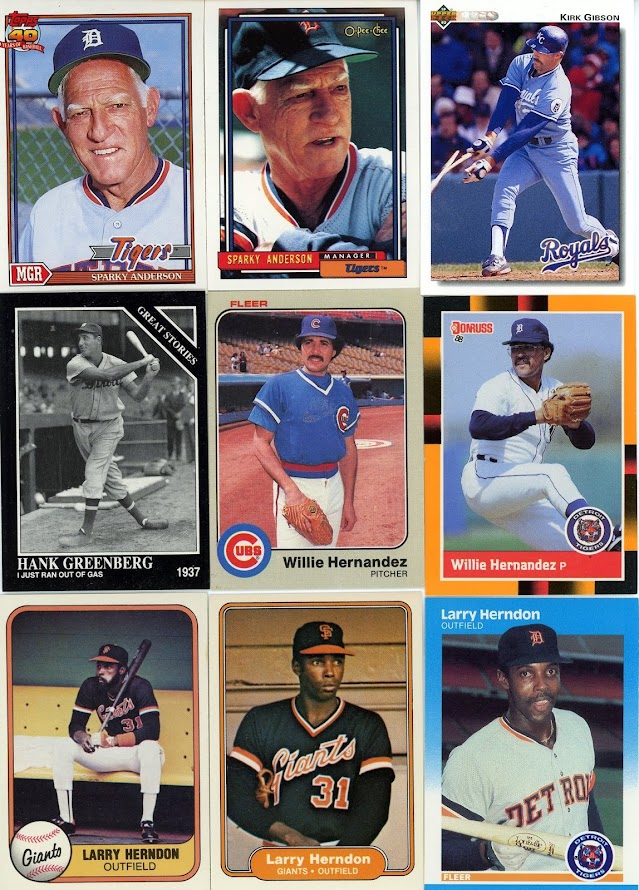 I started by grouping together the guys with very few cards. By the way, only one guy in this whole group wasn't a World Series champ, and as you'll see most of the players here are '84 Tigers. The Sparky cards are OPC and Gibby's a Gold Hologram from UD. You'll see a number of Tigers with other teams, such as '84 champs Hernandez and Herndon here. While the cheap price tended to push me towards junk wax stuff, I was excited to grab some early 80s cards of a number of players like the latter. 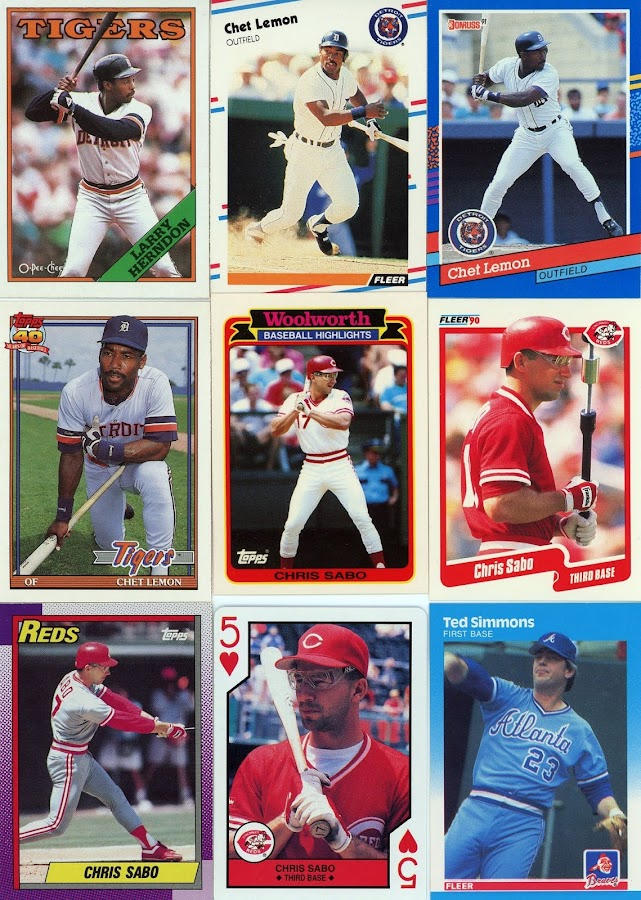 Herndon's OF mate Lemon is one of those guys whose cards leaned heavily into the late 80s/90s, but that's fine since these were all needs. You'll see quite a bit of O-Pee-Chee today since I hadn't otherwise chased those in terms of my non-supercollection PCs. A couple oddball Sabos bookend Canadian versions of popular brands: the Canuck offering of Fleer and yet another OPC. Simmons is the only guy in these first few scans that didn't win a ring as his '82 Brewers fell to the Cards, but you certainly can't blamed the future HOFer! 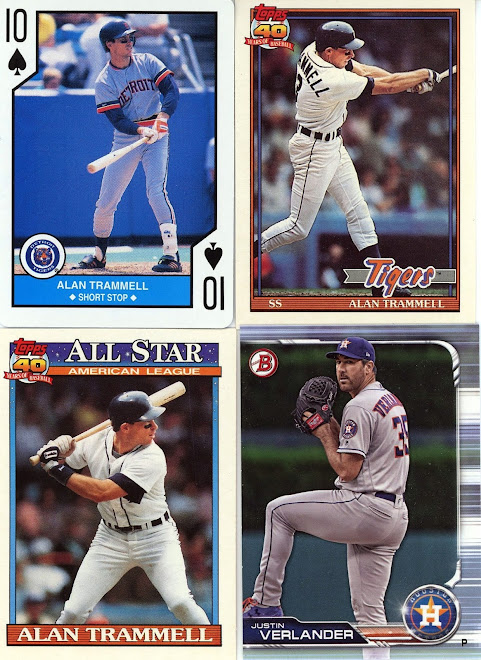 Those playing card sets popped up quite a bit too, making for some fun oddball items to grab. Tram also got the OPC treatment with both of his '91 appearances. And that JV is one I picked up before Gavin was nice enough to send a copy my way, so now I have one I can trade to another Verlander collecting buddy. 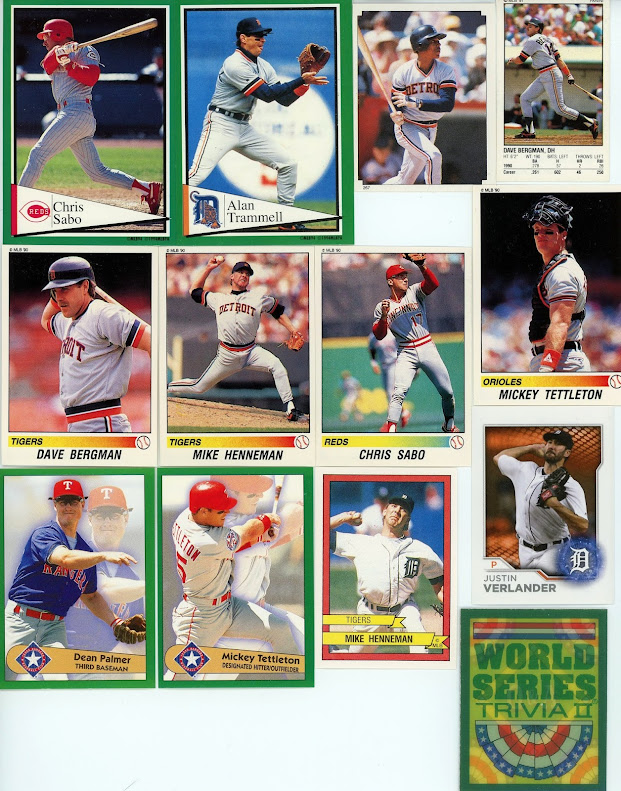 Here's a look at most of the stickers and other odd-sized stuff. These are mostly Panini, and I'm sure I have almost all of them in the albums they went in since my brother and I collected them for so long, but it's nice having clean, unpeeled copies. Whitaker's only appearance today is that Topps sticker you see, um, up top. The mini hologram is considered a Chris Sabo item as he's the answer to the trivia question on the back: "Who was the last player to hit two home runs in one World Series game?" Spuds did it in 1990's game 3. Looks like that feat has been matched quite a few times in the past 30 years, but only Albert Pujols (2011) and Pablo Sandoval (2012) have joined Ruth and Reggie Jackson in clobbering three. I managed to get creative enough to fit all of the Gwynn, Maddux, and Ripken items in one scan, which was good since the smaller stuff probably wouldn't have fit with the rest of the stickers. I always thought that Score insert repped by Maddux in the middle was pretty nice for a low-end product. The sparkly Gwynn Panini sticker takes me back to the days when I'd rip packs hoping for just such an item. And the tiny Topps Micro of Ripken in the bottom-left was a bonus item the sellers were generous enough to throw in as I made sure it wasn't part of my order--very cool! No Griffey here, but I wasn't too surprised since there aren't many dime cards of his I probably still need at this point. 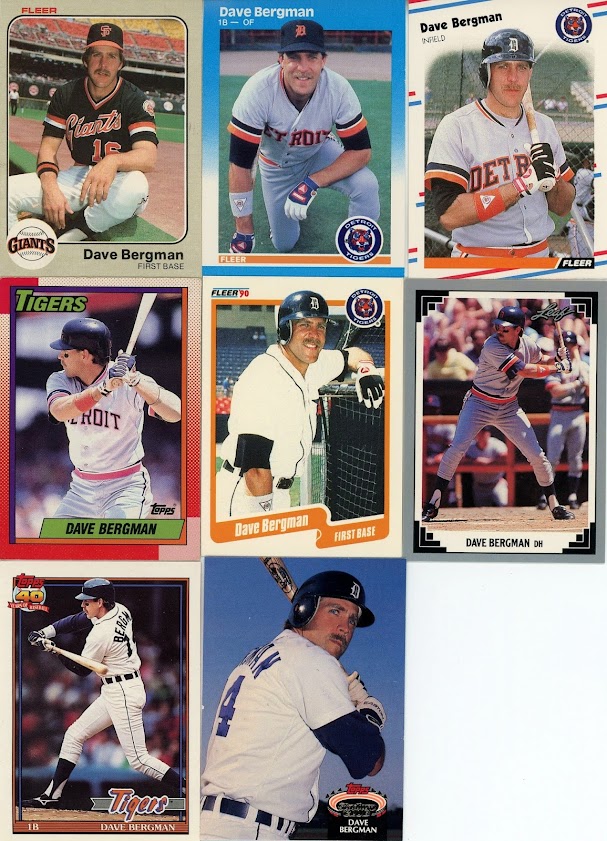 Next we're getting into guys for whom I grabbed a larger number of cards, but was still able to scan in a reasonable amount of time (if not cleanly--some were bowed enough to make it a pain while a few just refused to stay in one place. Oh well.). The late Bergman is the first of those players alphabetically, and I nabbed seven new Tigers cards plus an early Fleer issue where he was with the Giants. 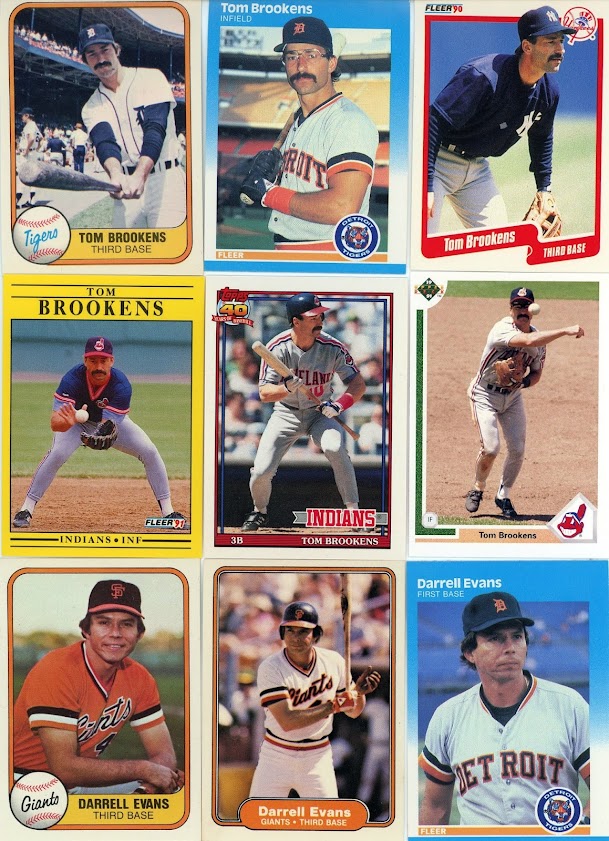 Utility guy Tom Brookens is next, and I also came up with an early 80s piece for him: his '81 Fleer card, which is a second-year card since his RC can be found in '80 Topps. It's a bit weird seeing him in other uniforms but I liked him enough to go after the Yankees and Indians cards as well.
And then we have half of difference-maker DH/1B Darrell Evans' purchases, all from Fleer. The '81 and '82 join the pile of cards made just a bit before I was born, and Evans is the third '84 Tiger today that was with the Giants not long before joining the wire-to-wire champs. Thanks, San Fran! 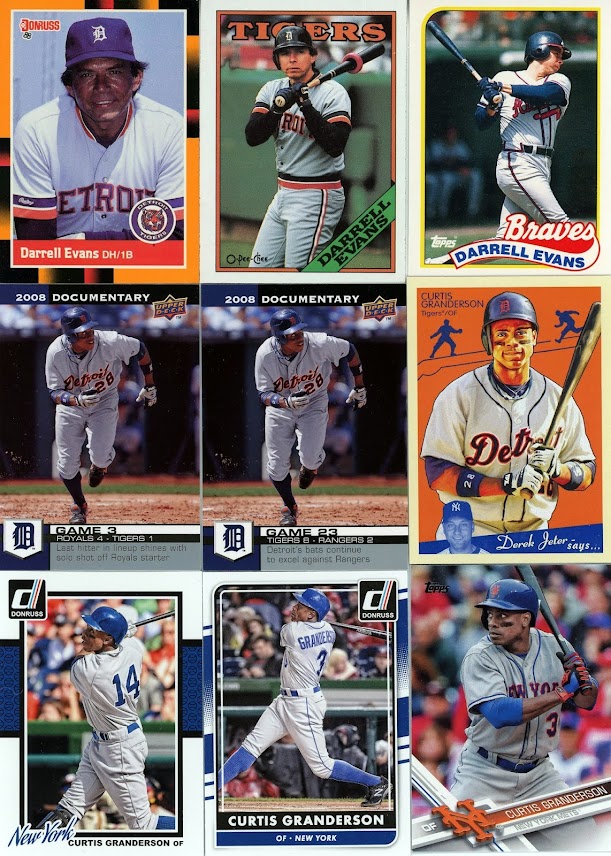 After Evans' group finishes up we have six many Grandersons! Nothing terribly exciting, with UD's goofy Documentary product and a couple mid-2010s Donruss designs that don't look like they're two years apart. The Goudey card is fun, though, even if it has Jeter's stupid mug on it. 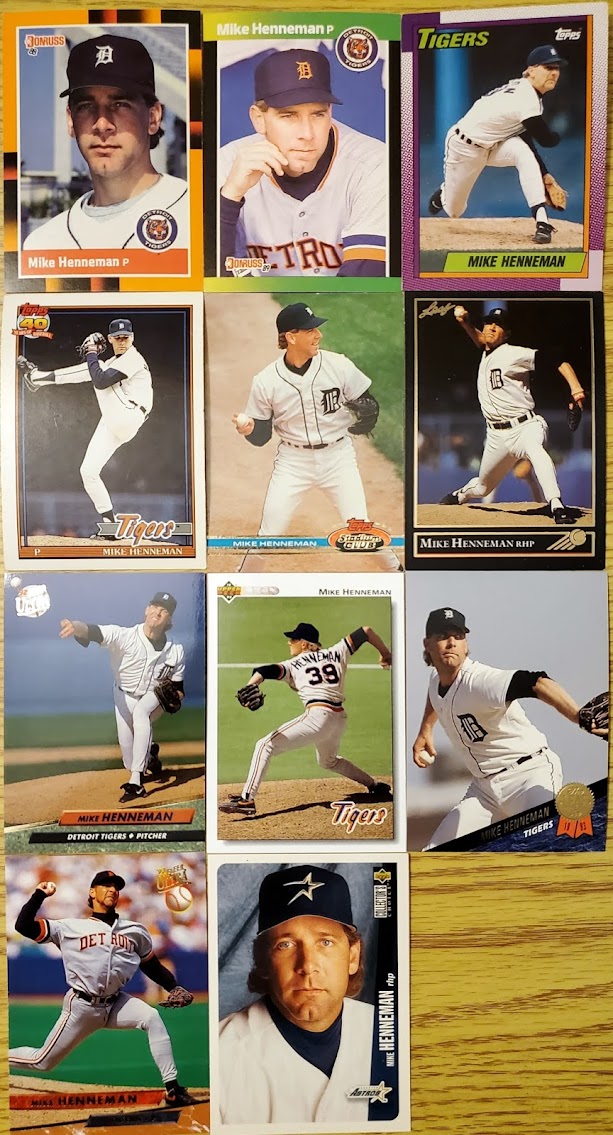 The rest of the images you'll see from here on are obviously photographs since each player had more than nine cards and I didn't feel like scanning them all. Former closer Henneman got a nice group, with Stadium Club and Ultra cards being among the highlights, though nothing can top Leaf Black Gold. Say it with me: "That shoulda been the base design!" The Astros Collector's Choice card is a great example of why he earned the nickname "Henne-buttchin"! 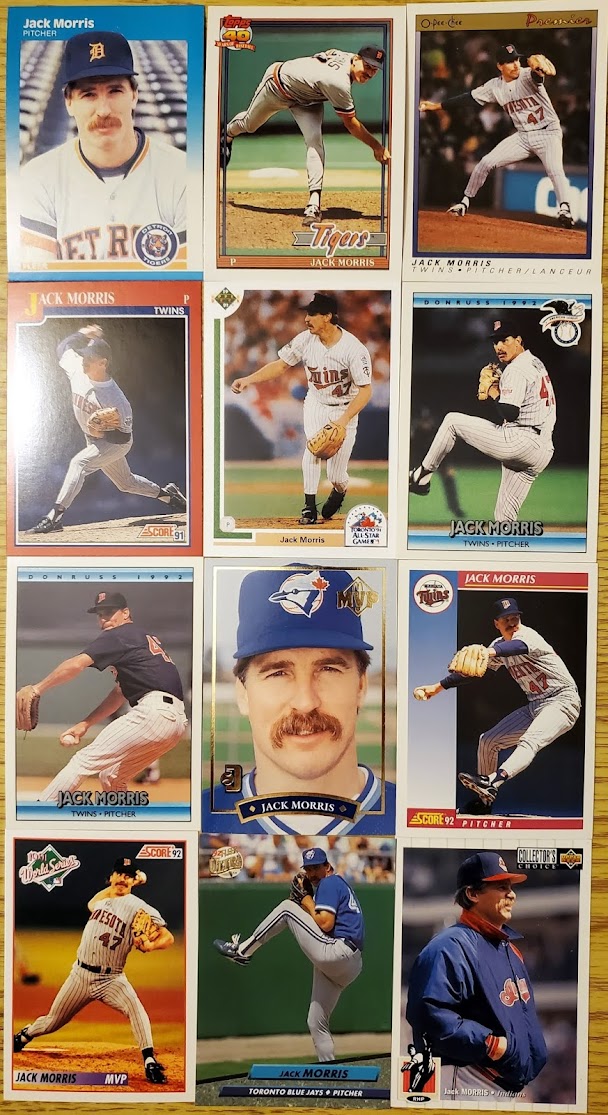 There's only a couple Tigers items of '84 ace Jack Morris here, but since I was dropping dimes I didn't mine grabbing some cards of him with his other teams. I mean his performances with Minnesota and Toronto are a good reason he's in the Hall today. Hell, even his sunset season with the Indians wasn't that bad. My favorite here is the Donruss McDonald's card, which feels more like an Ultra-type offering than what was still a pretty boring flagship design back then.

"My god how can there be that many plus however many you already have" --Paul (Scribbled Ink). This is a nice bunch to add to my collection, and Paul's response was when I told him how many more I had on the way from Cardbarrel and Sportlots. I'm particularly fond of the RCs up top (couldn't figure out why they kept getting cut off while I was cropping so I just gave up) plus the last three. Those take me back to when I had a blast opening boxes of Topps flagship. 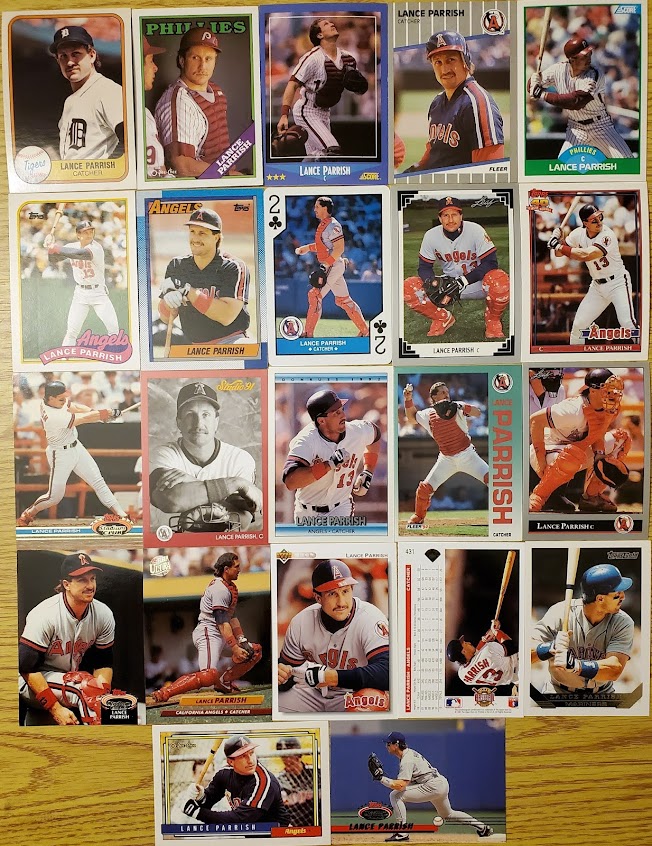 I ended up with a really nice stack of Lance Parrish stuff too, though once again almost none of it was Tigers-related since I have a good amount of that content and then he left for Philly in '87. He also got lots of needs added to his collection, including a UD Gold Hologram, multiple OPCs and Stadium Clubs, and more. And of course my favorite is the '81 Fleer, made in the fourth year of him appearing on cards and Fleer's first making them. 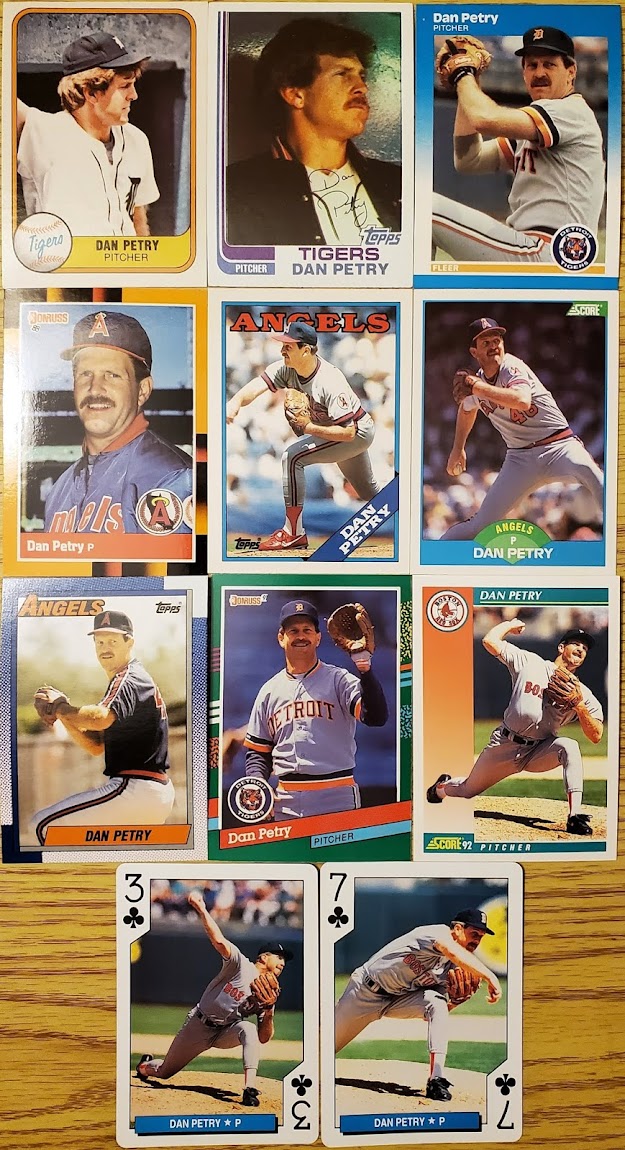 Another '84 pitcher, Petry got a nice bunch, not to mention a solid pair of early-80s offerings. Most of the rest are with other teams, but how cool is it that the last three with him pitching for the Sox look like they were all taken during the same pitch?

In Phillips' case a good chunk of his pickups were Tigers cards because his years in Detroit coincided with a spike in new brands. Not that I mind cards of him with the A's, with whom he won the '88 pennant and a ring in '89, mind you. And as usual, the Metal Universe card almost literally screams "1990s!" because it's so radical. He's another guy who's getting some more PC help from the sellers I've mentioned a couple times here already, and I'm interested to see how much of a dent I've made on his checklist when I have everything in hand.

Tanana played eight seasons each for the Angels and Tigers, but since all of his California years were before 1980 I only ended up with one card of him with that team, out of Pacific's Nolan Ryan set. Most everything else is from Frank's nice run with Detroit, though we do open up with a Texas card that shows a guy clearly in need of a shave. 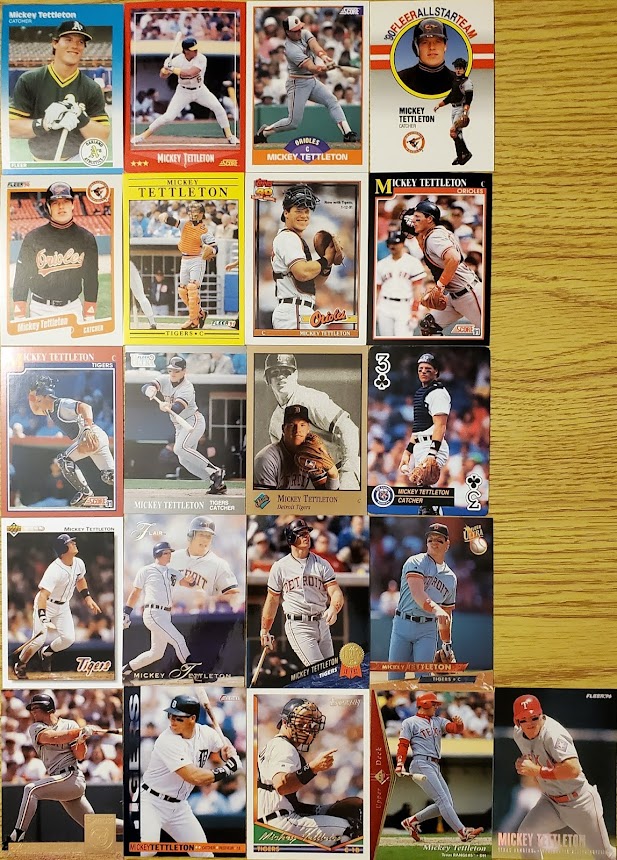 And we'll finish up with another guy that got one of the biggest hauls from the site. Fruit Loops' cards here span 1987-96, most of his career, so we cover all four of the franchises for which he suited up. As is typical for me I get more interested as we get into the mid-90s, so my favorites are in the last couple rows. My top new card is definitely the Tiffany parallel from '96 Fleer, which offered up an outstanding one-two punch with the matte base cards. But no matter what you pick here, there's a lot of great stuff in terms of photography and design, including some great shots of Tettleton behind the plate.
That's it for my first order from the online dime box, though I can promise it won't be my last thanks to their excellent prices and service. I'll give them some time to reload as I work on the other incoming stuff and then hopefully I'll have a similar haul to share again!
In the meantime expect one or more Cardbarrel posts with Sportlots down the line (Box shipping delays things a bit but I'm not in a hurry and you save a ton of money). But first I should be seeing my next incoming trade package soon, one coming in from an old friend!
Posted by Dennis at 5:45 PM