Tonight's a good opportunity for me to get all caught up with my TCDB deals. And oddly enough, both came courtesy of members who are fellow Michiganders!
First up is a small PWE trade with mastodon, who hails from nearby-ish Bloomfield Hills. He proposed a deal for a couple '96 Flair Bip Roberts cards--that's right, he got himself intentionally Bipped!--and I countered it a bit so I ended up with the following: 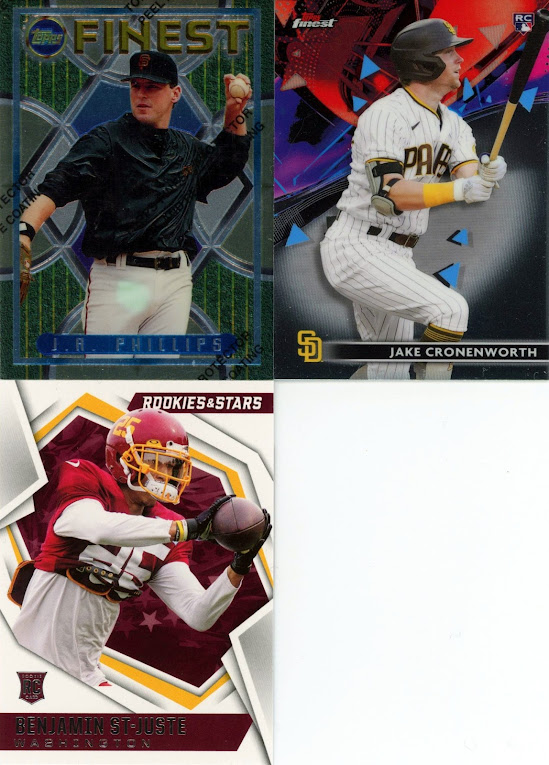 Phillips goes towards my '95 Finest set chase, which appears to be 38 cards short. The '21 Finest Cronenworth is a card I subbed in for a couple others since I valued this one more. It's my 63rd of the two-time All-Star and yet another first-year off the list. Last up is a '21 Panini Rookies & Stars RC of former Michigan and Minnesota DB Benjamin St.-Juste, which I realized too late I already had. No problem, off to the trade list it goes!
As my most recent deal this was a fun and easy transaction and I'd be glad to work another one with him anytime.
The other one I need to cover this evening is one I made back in August with Benjamin, a.k.a. walkingshadow. He found me through this here blog and we got to discussing dealing some sets. After some back and forth I agreed to head to his place in nearby Whitmore Lake to porch drop off a starter set of '96 Donruss that was 90-something percent full, a '96 Leaf set missing one card, and a stack of Ripkens he didn't have. In return he gave me a complete set of 1992 Stadium Club.
While I already had all of the base cards of my PC guys from the product I thought it would be fun to own all 900 cards. And now that I have it I thought I'd do a quick overview of the set, its design, and the cards that interested me the most. 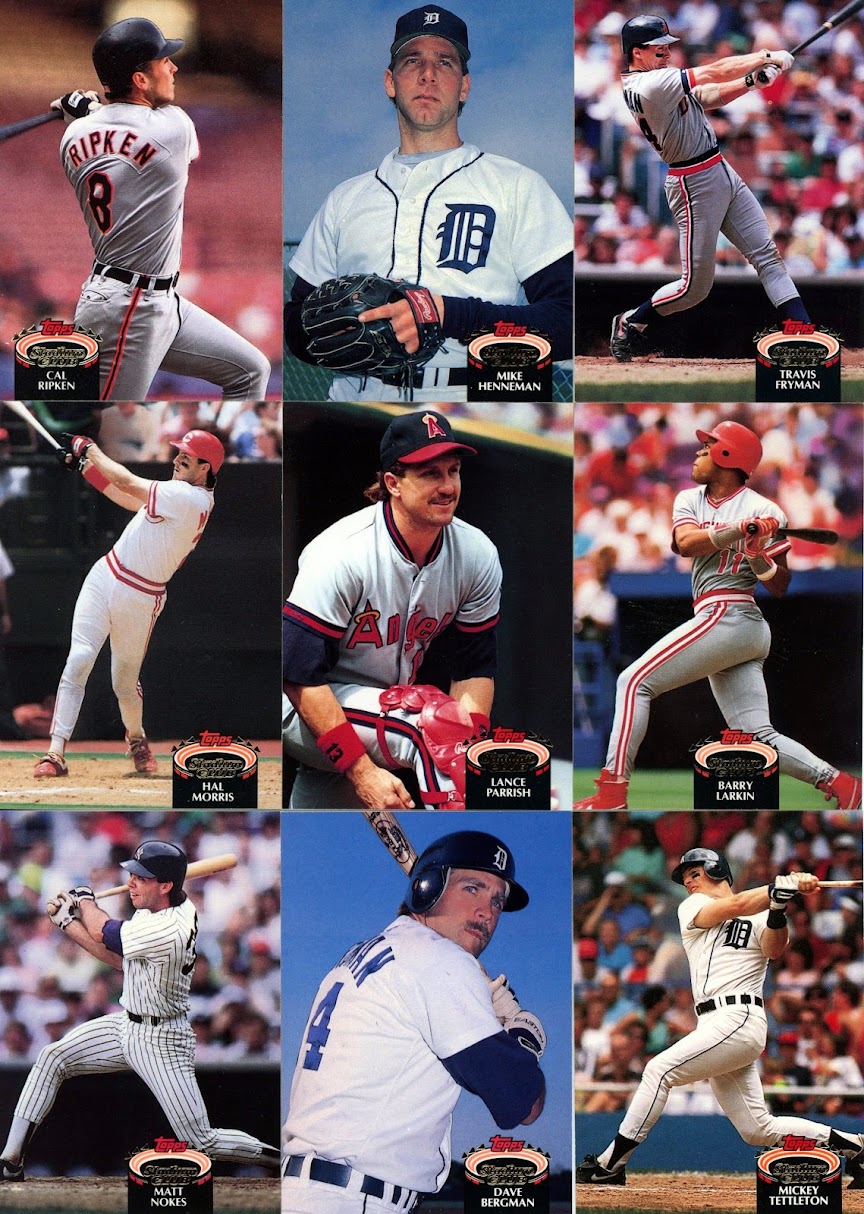 We'll start with Tigers and non-Tiger player collections. Everything's all mixed in and out of alphabetical order as I pulled and scanned these in numerical order. I love that Cal is card #1 in this gorgeous set. 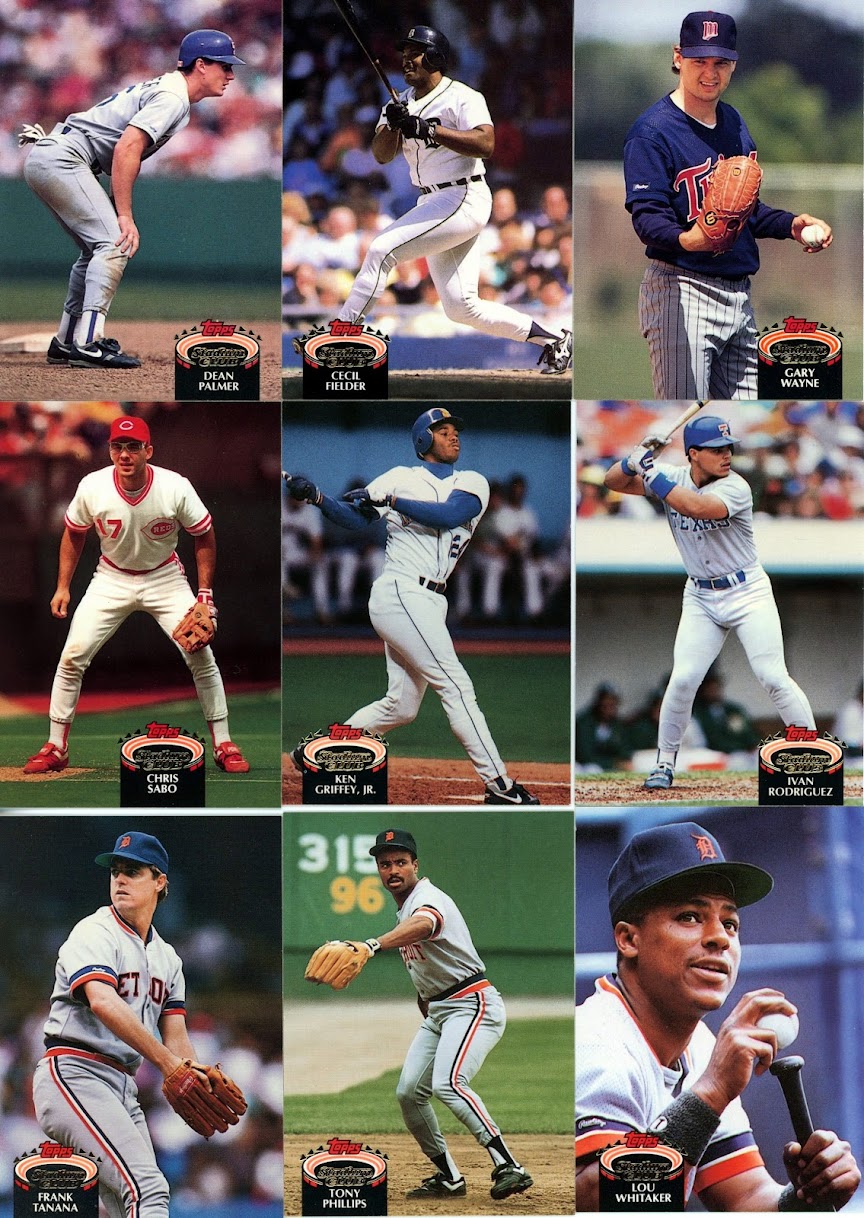 This was the second year of the product and it stayed quite similar to the 1991 debut, but I can't say there's anything wrong with that. After things got especially stale in the 80s despite the new competition from Donruss and Fleer, Upper Deck came along and put everyone on notice that they'd need to up their games. Topps finally responded in '91 with glossy cardstock, foil stamping, and outstanding full bleed photos. No flagship product has ever sniffed the quality of Stadium Club in my opinion, but I think Topps was ok with that. 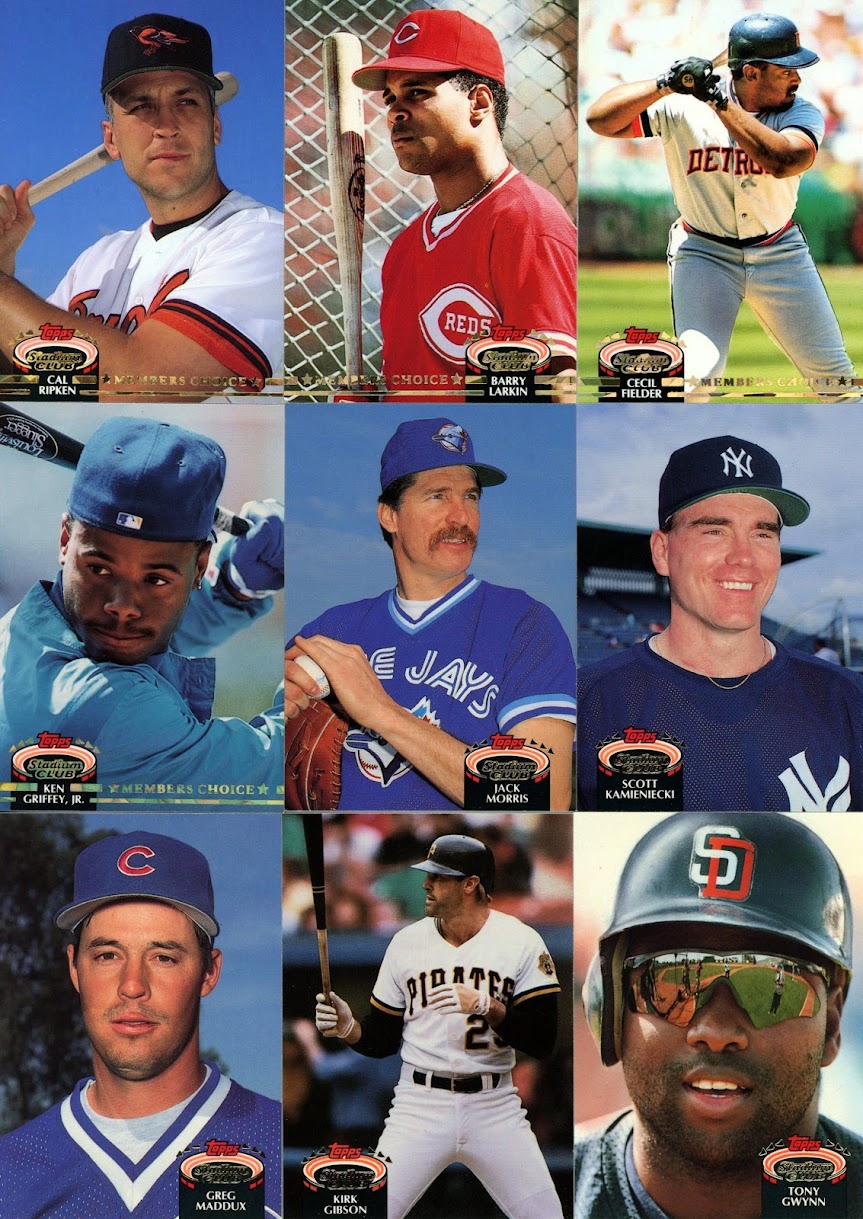 The 900-card set was broken up into three series, and that allowed Topps to get photos of players in their new uniforms. Oh, it seems like a good idea to point out to younger collectors that sets used to get photos of players in their new uniforms, whether or not they had "update" in their titles, because that was a thing you did back then, not that I'm pointing that out for any particular reason coughTOPPScough. Anyway, that means you get to see Gibby both in his brief stint with the Pirates in '92 plus his one year with the Royals (below). And more of that amazing photography as well. That's a top-10 Gwynn photo right there! 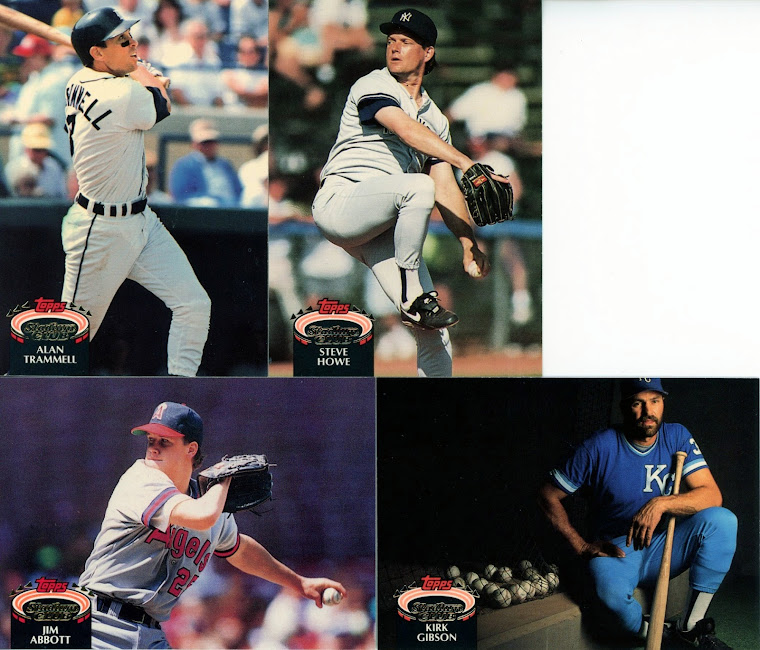 Since the numbers didn't divide up nicely for scans this last one covering the Tigers and PC guys includes the final two verticals as well as a pair of horizontals. I've always liked cards that show Abbott's necessary unorthodox delivery. 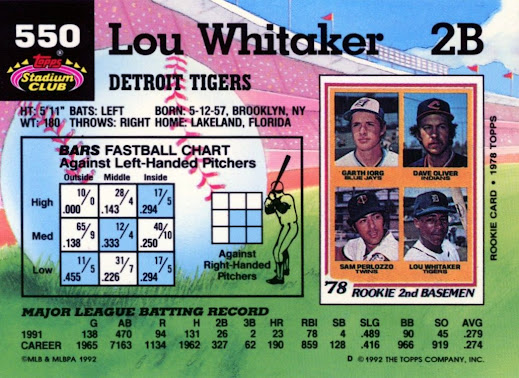 One thing I thought that was extra fun about the first two Stadium Club products was how the backs reprinted the players' first Topps cards. While that and the hitting chart leave relatively little space for the previous year's stats as well as career numbers, this is a feature I've long admired. It was cool back then to see Sweet Lou's '78 Topps first-year and think "I'm gonna get me one of those some day." Which I did! 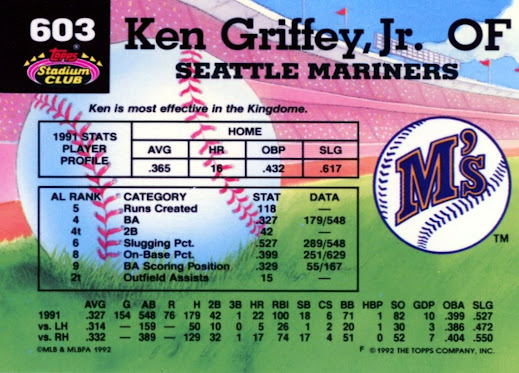 I also wanted to include a back from the Member's Choice subset. This second card takes a deeper dive into those players' 1991 seasons, as you can see above, both showing something like where they put up their best numbers and also their lefty/righty splits. 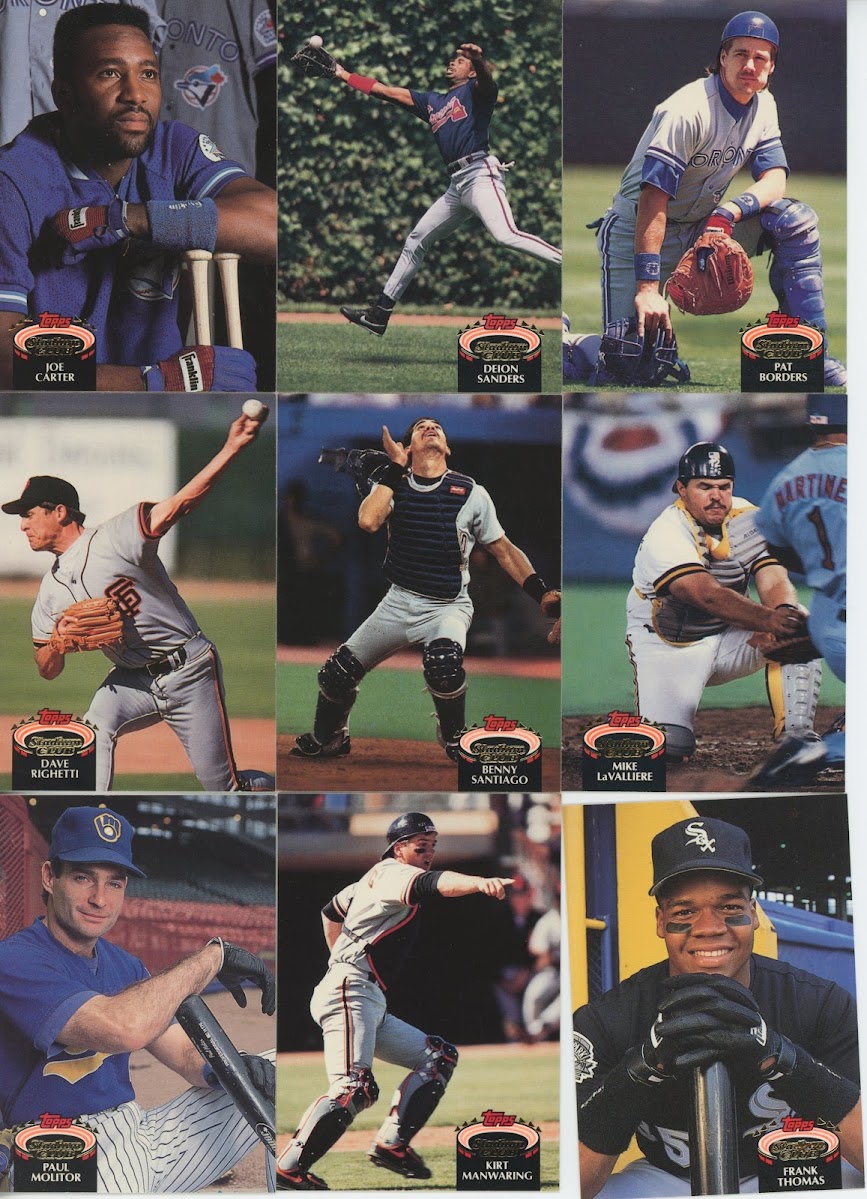 The last four scans of this post include cards I grabbed while flipping through the whole set to highlight. If I had to describe the themes, they'd be: posed profiles; awesome action; cool catchers; turning two; and photo fun! Here, Carter and HOFers Molitor and the Big Hurt get some classy posed shots, there are four cool cards of catchers at work, and the game action in the other two is captured very nicely as well! 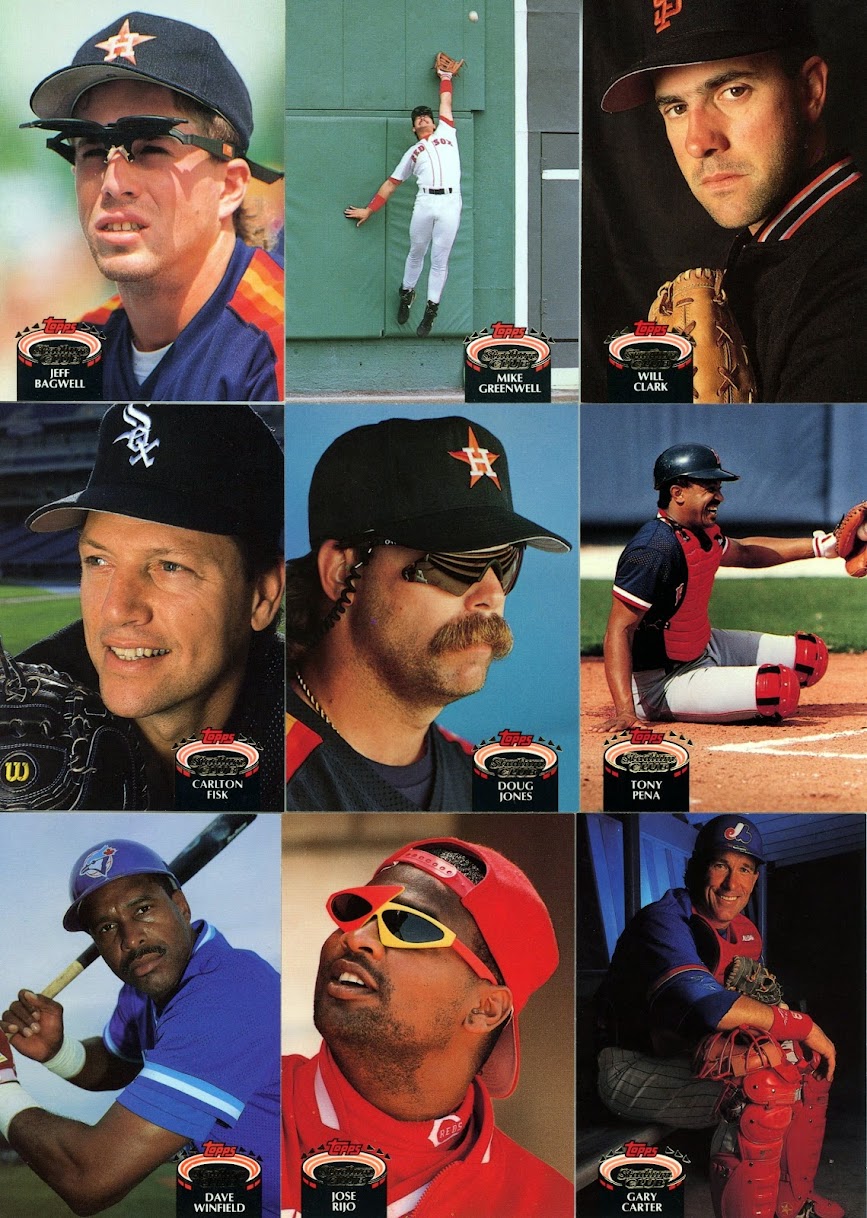 There are more posed shots than any other category in this scan, but that Jose Rijo card with the funky shades is awesome as well. Getting Pudge and the Kid in the same scan was serendipitous, and I love that Pena joined the group as well since he was also outstanding defensively at the position. Winfield often looked like a giant at the plate because he made his bats look tiny. 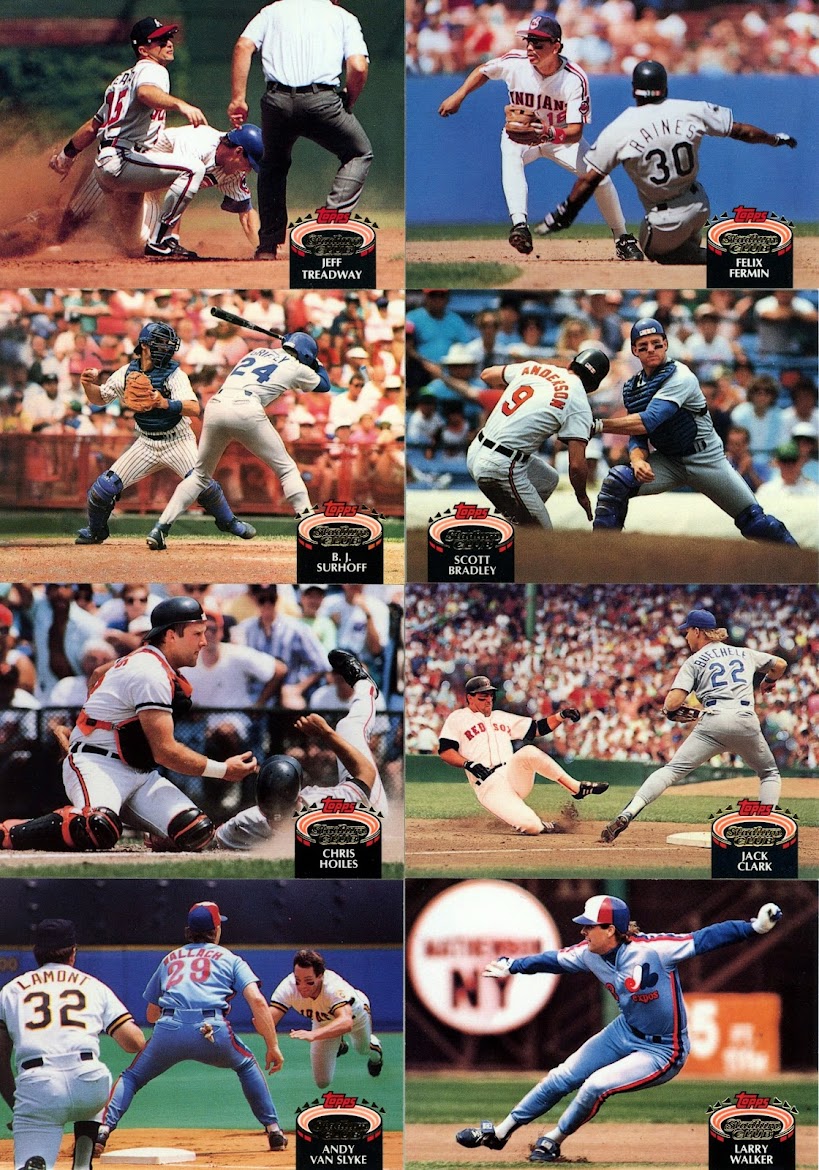 The horizontal cards definitely lent themselves more to great action shots, especially plays at the plate and the other bases. These are all nice for those of you who enjoy those mini collections, plus cards with cameos from other players, such as Raines and Brady Anderson. 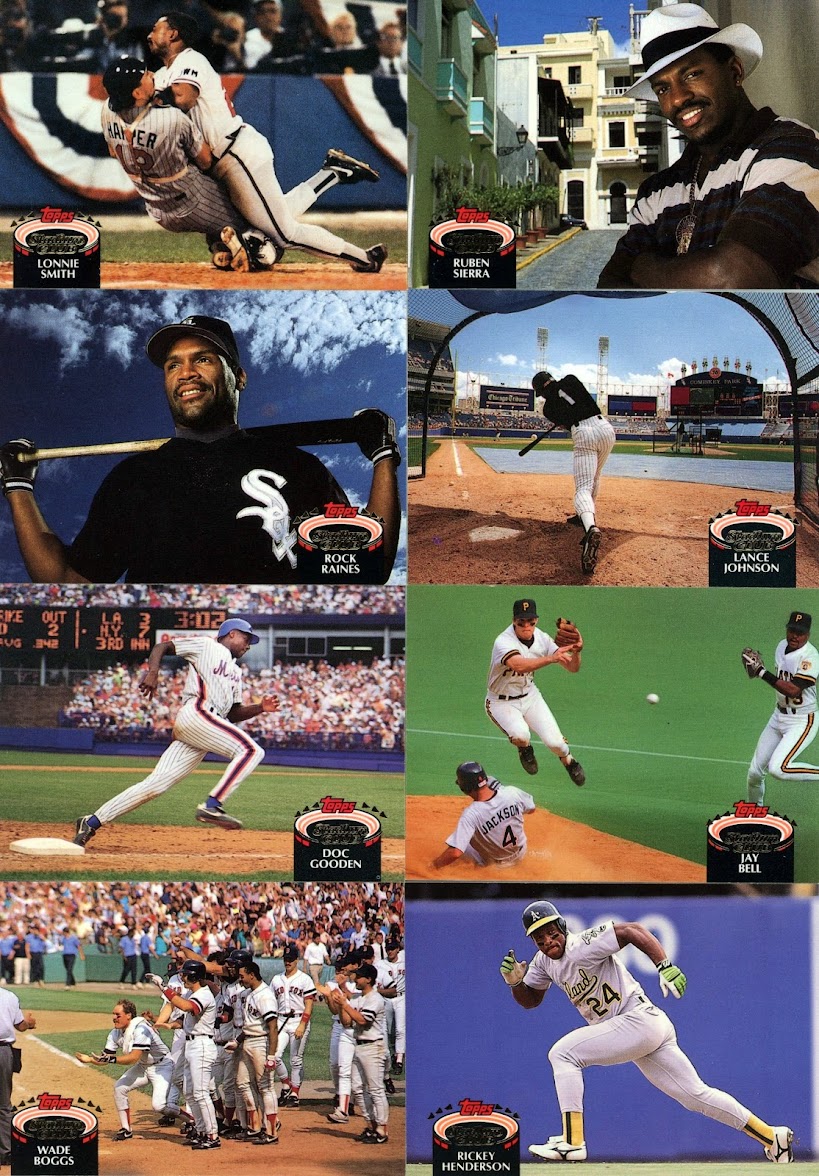 This is a great group to end with for sure. You've got playoff action, a couple more posed shots, a cool perspective from the batting cage, a pitcher turning on the jets, a high-flying IF, Boggs and the Red Sox in a group shot, and Rickey doing what Rickey did best.
Many thanks to Benjamin for a great trade, and I'll happily file this box away with the rest of my complete sets.
Posted by Dennis at 7:11 PM