I had a great time at this afternoon's monthly show and will be recapping that in relatively short order, but this evening I'm happy to finally take care of something I've had on the back burner for more than two years.
Last March I did a quick recap of the basketball stuff I needed from what I've been simply referring to as "The Michigan Box", a 5000-count monster box that was nearly full of UM basketball and football dupes from the collection of TCDB member cijt. As a quick reminder, back in May of 2020 he sent me the box in return for a mix of some of my dupe Michigan hits and a few other things that fit his collection.
It took me quite a while to sort through everything, especially the football stuff since it was sorted by player but then brand/year instead of my preferred year/brand. Plus I had to filter out anything I already had a copy of, plus any additional copies in many cases.
Still, it was a lot of fun to do that work and very productive for my collection as well--I was able to add more than 1600 new cards to my Michigan Football PCs! Putting them away will coincide with my project of expanding the home of those collections from four to five monster boxes because they were getting pretty snug. 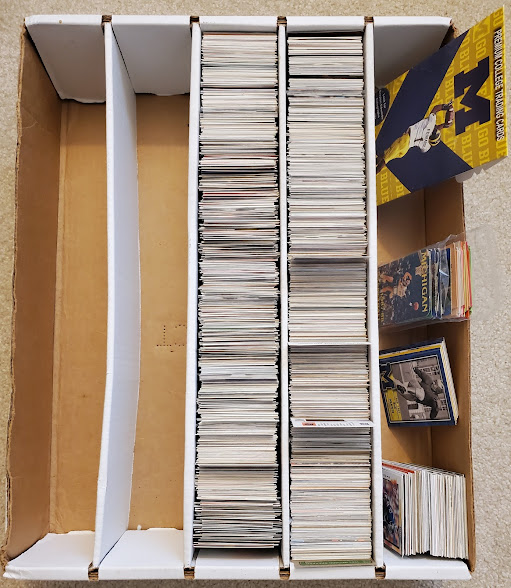 Here's a look at what was left in the box after I removed all the dupes (and the basketball stuff that I'd previously covered). I won't be showing all 1600+ cards, but I will show one for every player represented, plus a few of the items you see in the fifth row of the box pictured above as well. 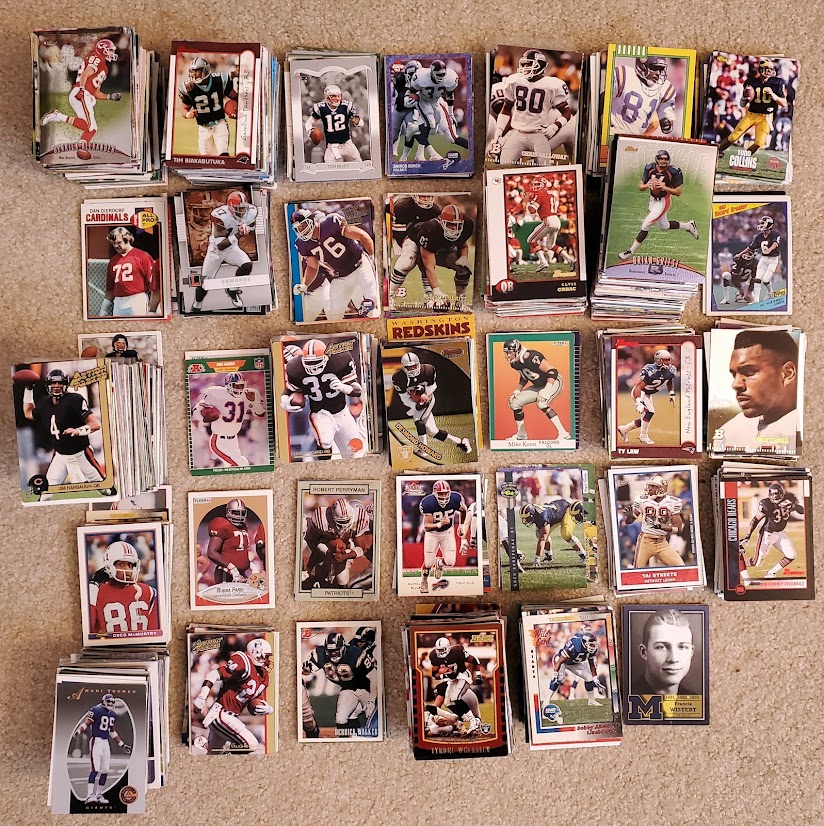 I also snagged a picture of the players' piles to try to give a sense of scale so you can see who benefitted the most from this trade. I know by the spreadsheet I created to track all this that Jim Harbaugh was the big winner, with Brian Griese, Evlis Grbac, Derrick Alexander, and Tyrone Wheatley following in his wake. I should also point out that the vast majority of cards were from the late 80s, 90s, and early 2000s (Chris apparently set a cutoff of who he collects around 2008). The second-to-last pile you see is guys who only had one or two new cards added, and those are followed by some new TK Legacy adds.
Because this is a lot of cards to cover I'm presenting the scans without comment other than identifying the players, mentioning how many new cards they added to their PCs, and then in parentheses noting their current collection counts as of this posting on TCDB.
There are 10 scans covering the 84 players whose collections were hit followed by a scan of TK Legacy stuff, and then a few more scans with something out of the ordinary at the end. Please enjoy this mix of years and brands of football cards!: 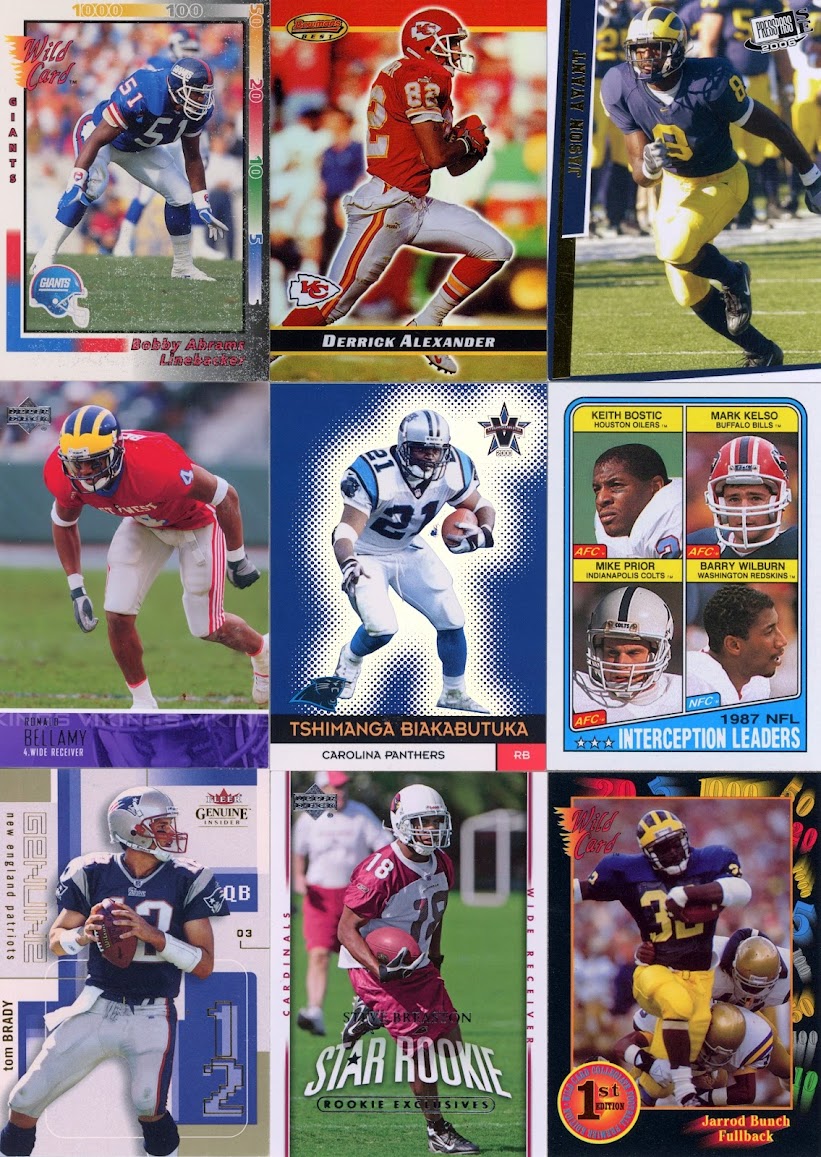 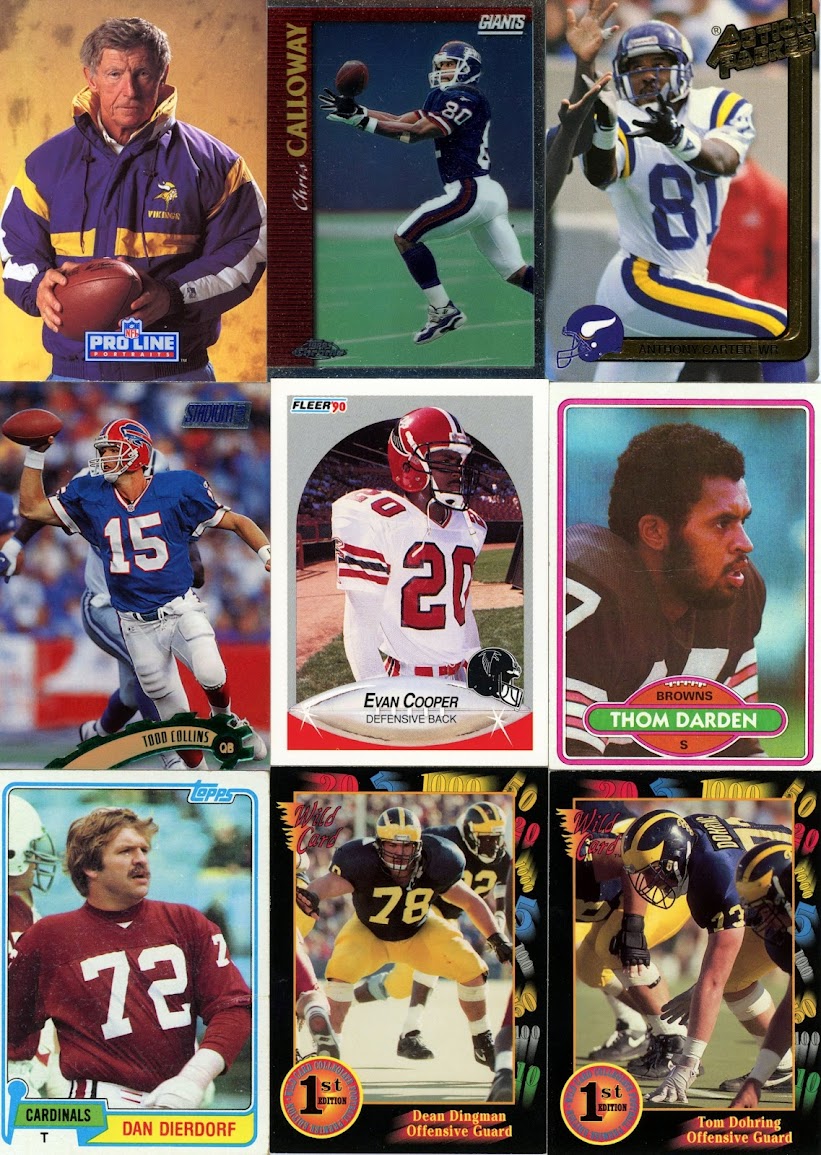 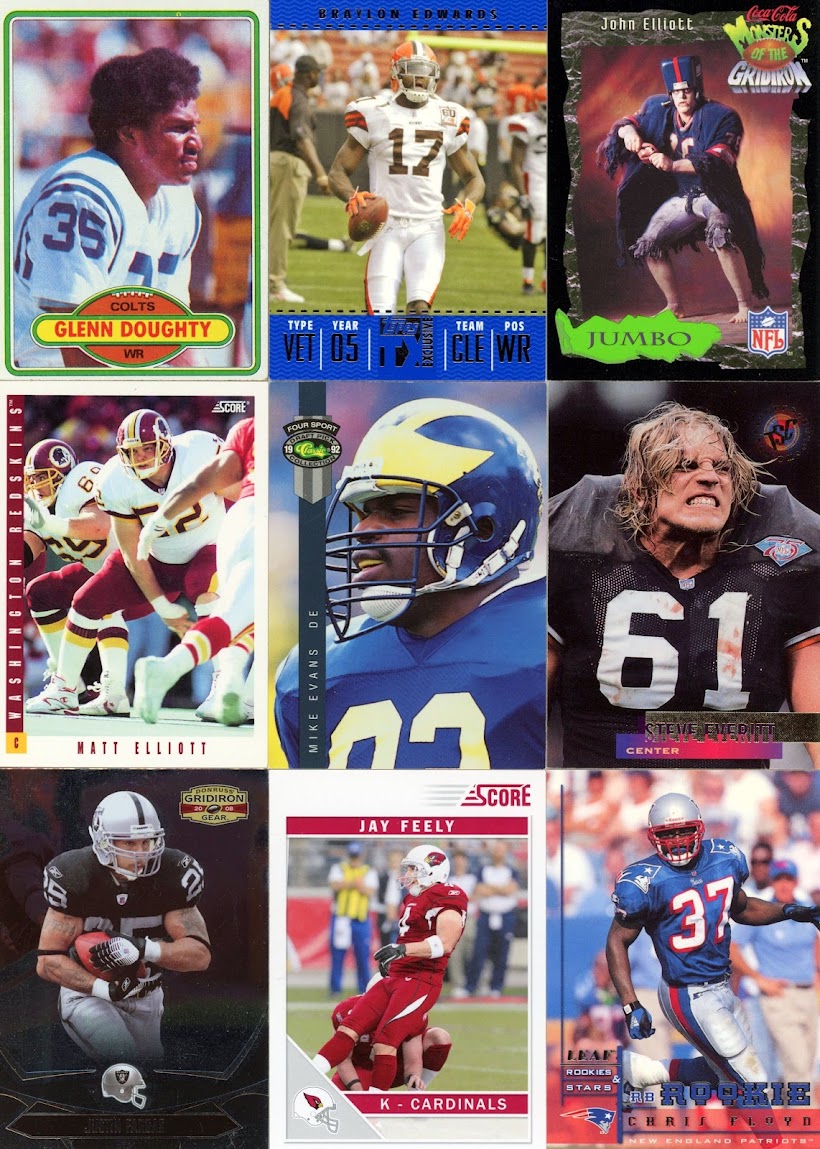 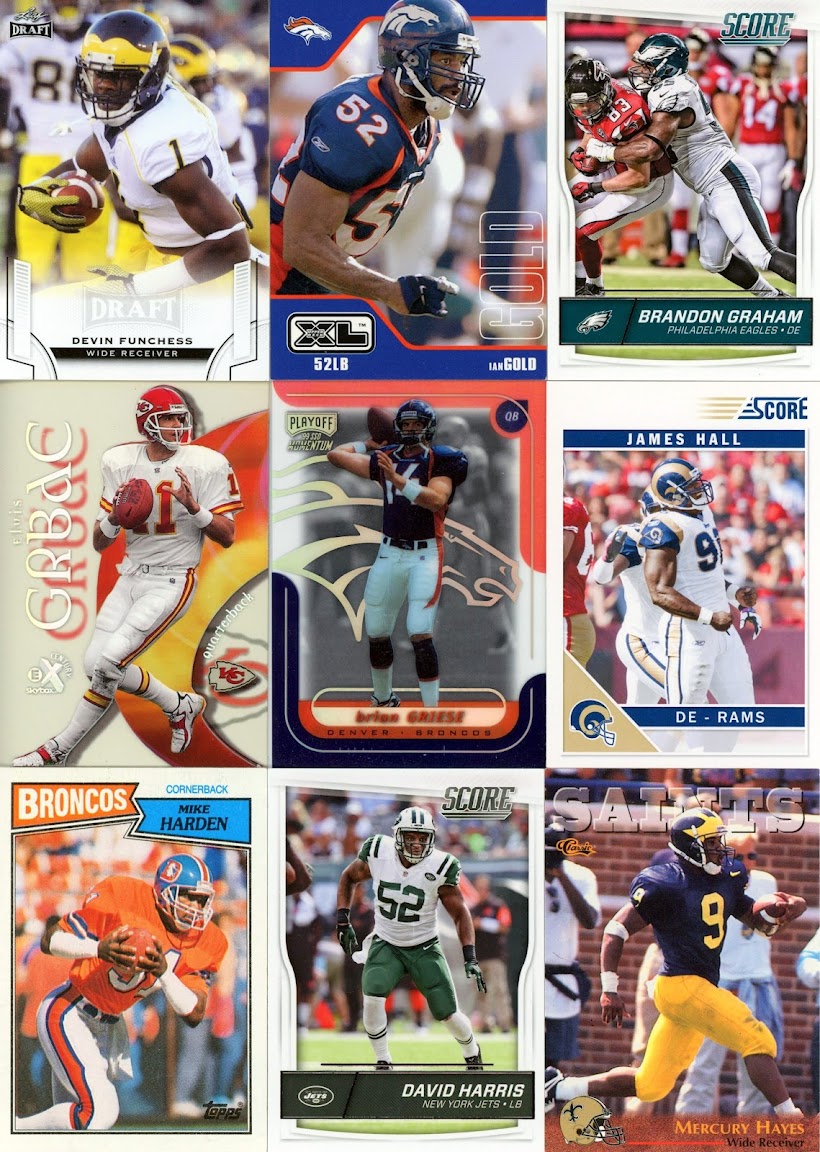 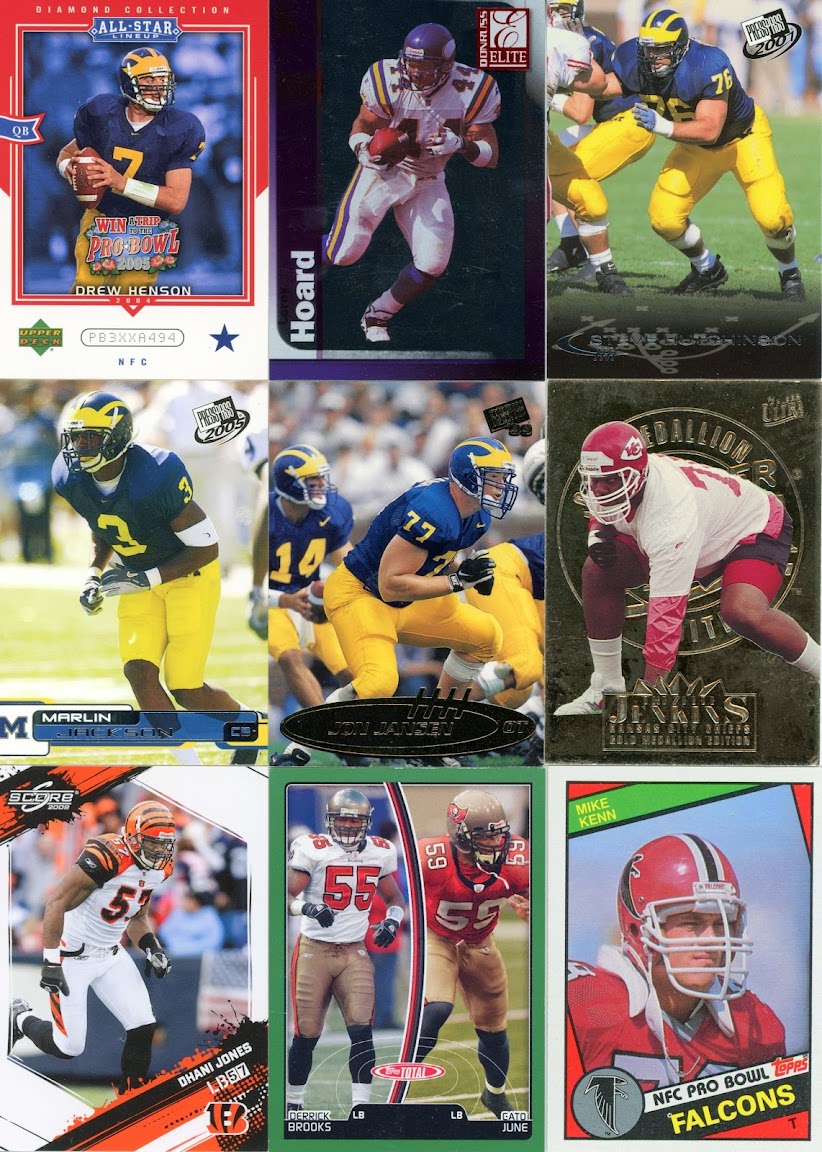 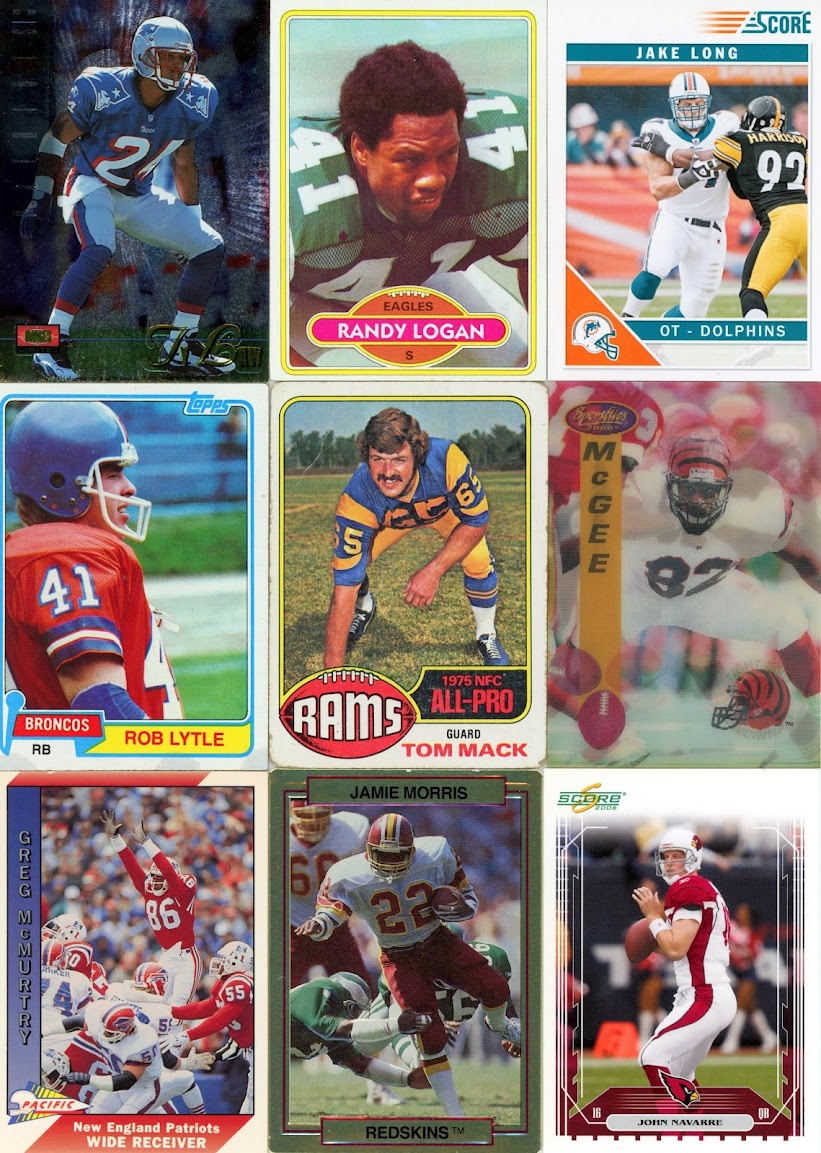 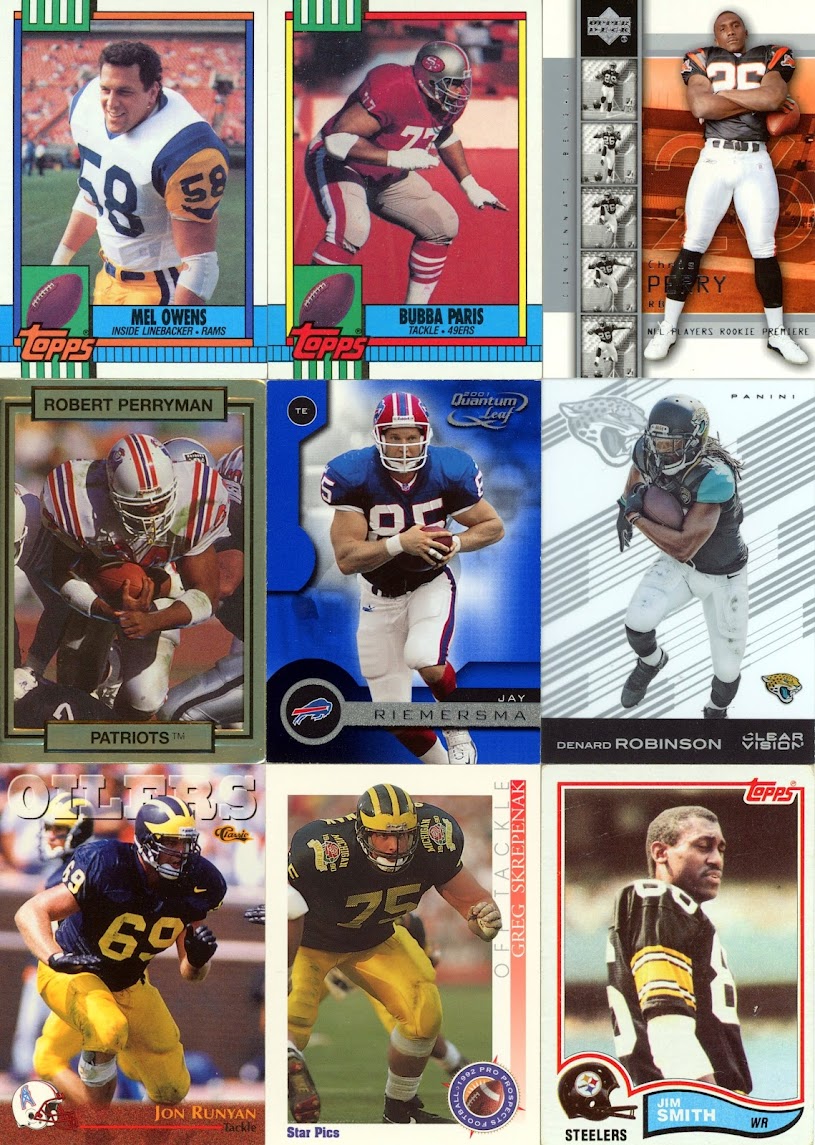 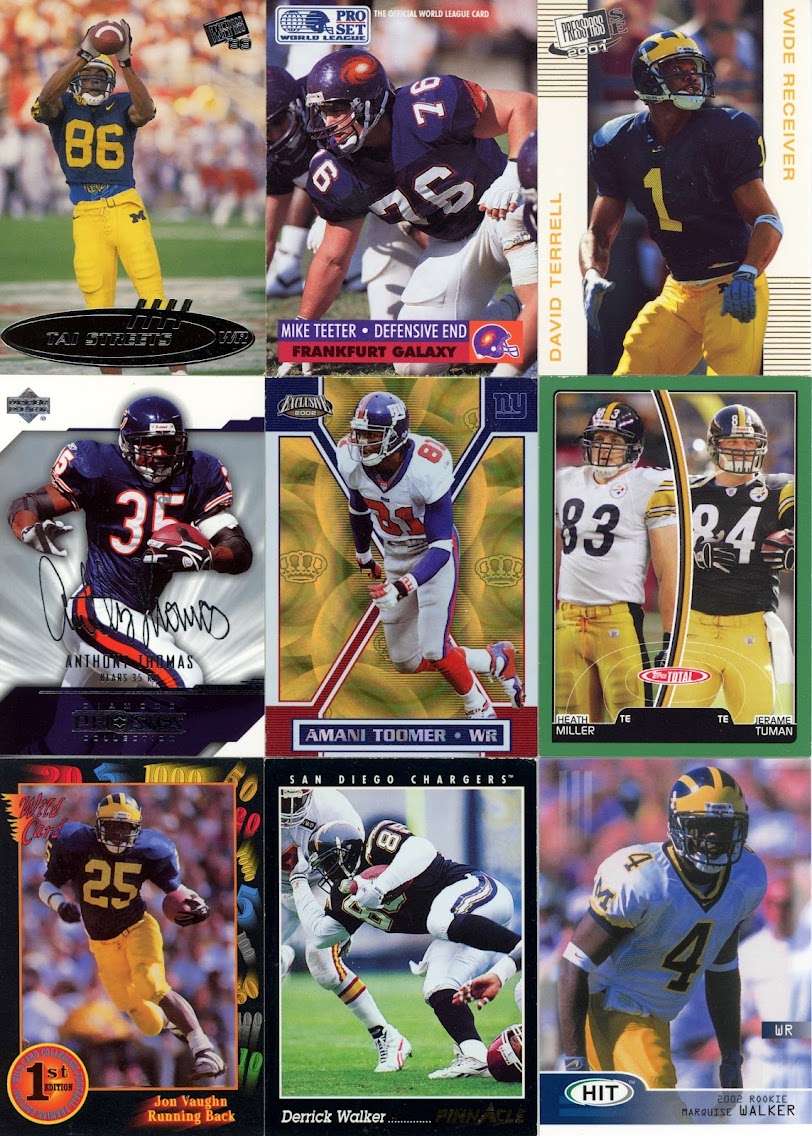 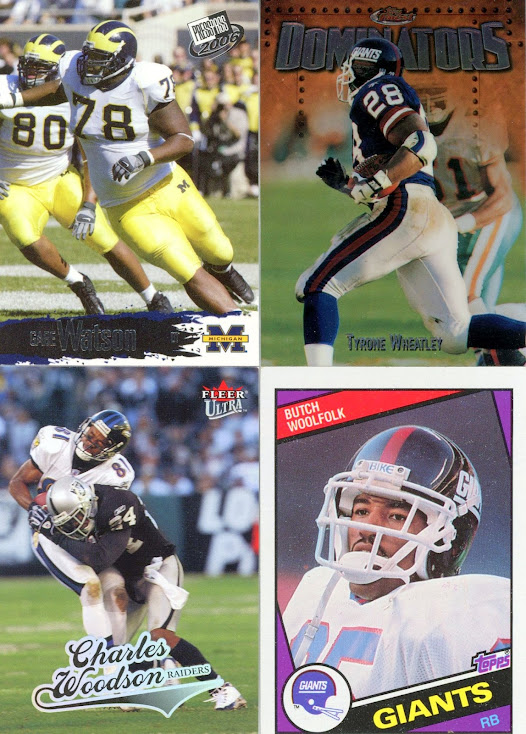 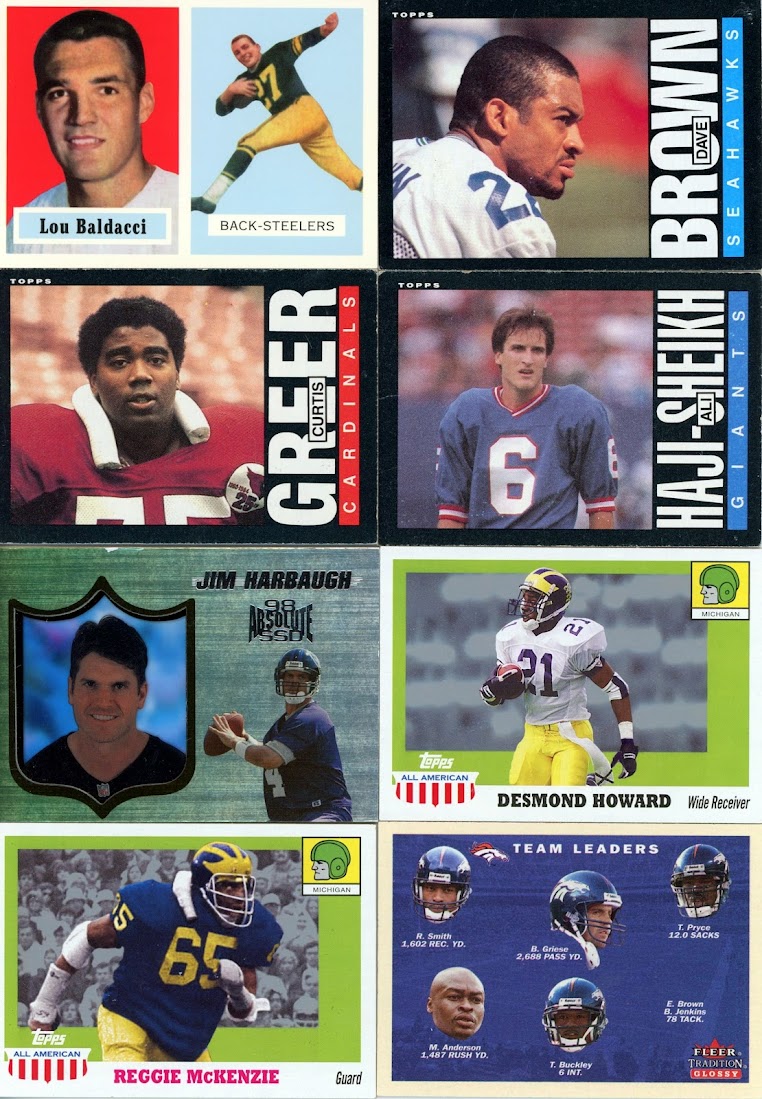 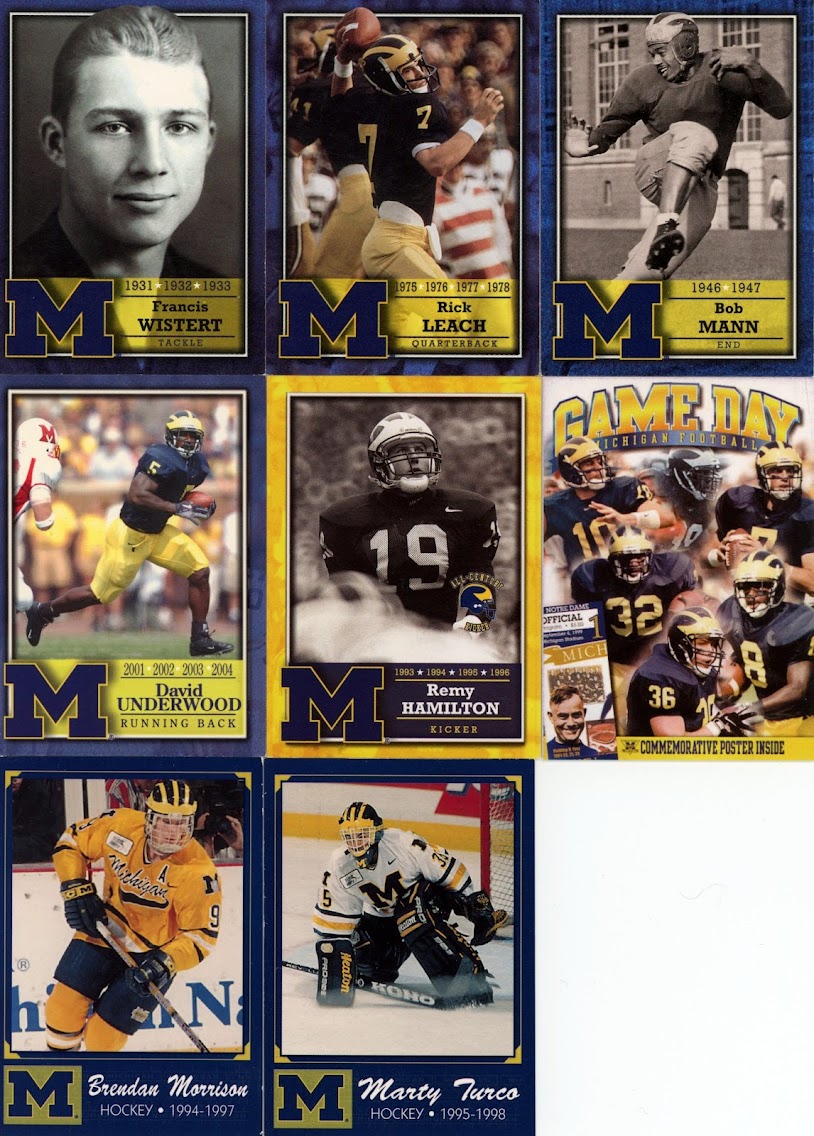 These were the TK Legacy cards I needed, and many of the names are notable--the Wistert family was big here, Leach was a sensation, and Morrison and Turco are two of the most successful alumni of the hockey program. 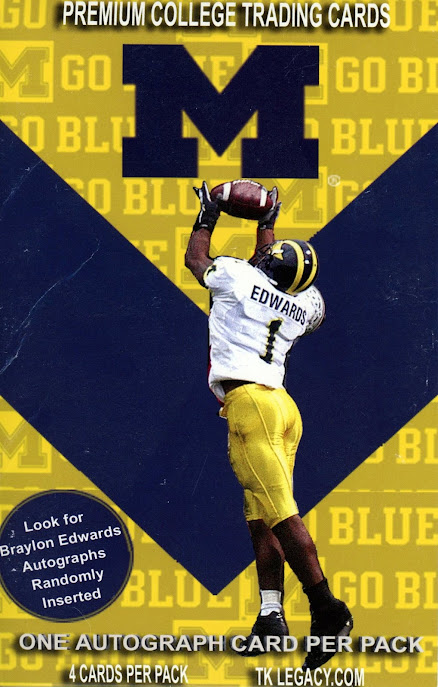 Speaking of TK Legacy, a product I broke several boxes of, Chris included an empty pack (shown roughly actual size) from an unknown year (I could probably figure it out but don't feel like doing the research) with Braylon Edwards front and center. I didn't keep any of these from my previous boxes but think I'll hold onto this one.
And lastly, there was a whole mess of tickets/stubs that I was excited to add to my collection. I love the mix of images used on these, from game action to campus sites, and many of them came from wins as well! The first two scans include 20 tickets from games between 1976 and 1984 while the final one includes plain game passes instead of tickets along with three stubs that are hard to pin down. Similar to what I did with the cards and player collection info above, I looked up the score of each game and posted the results below: 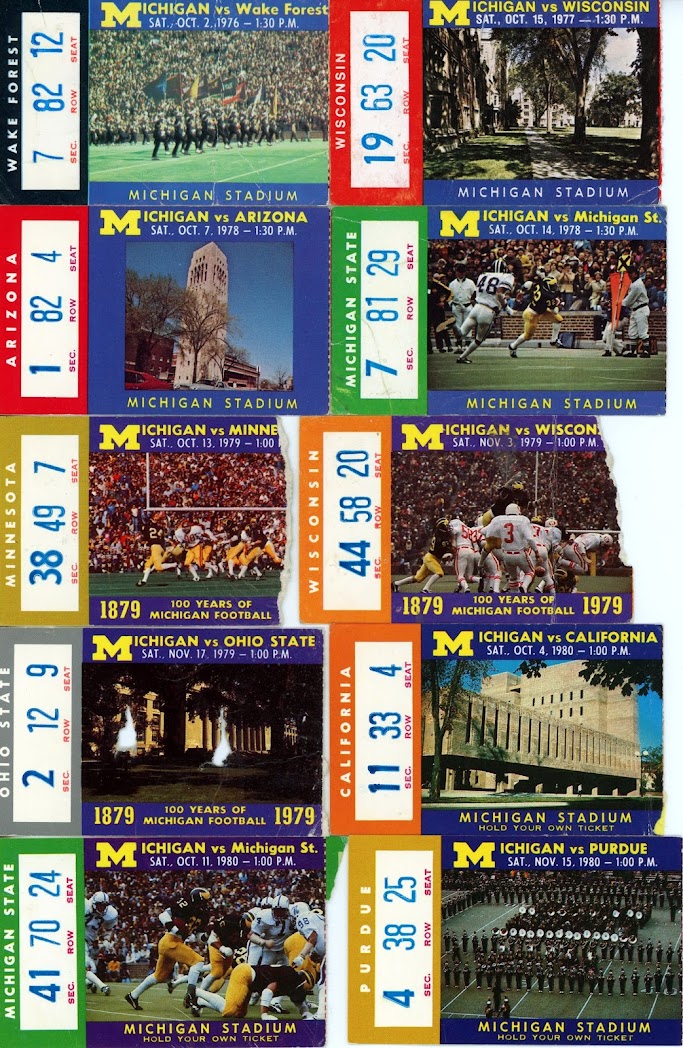 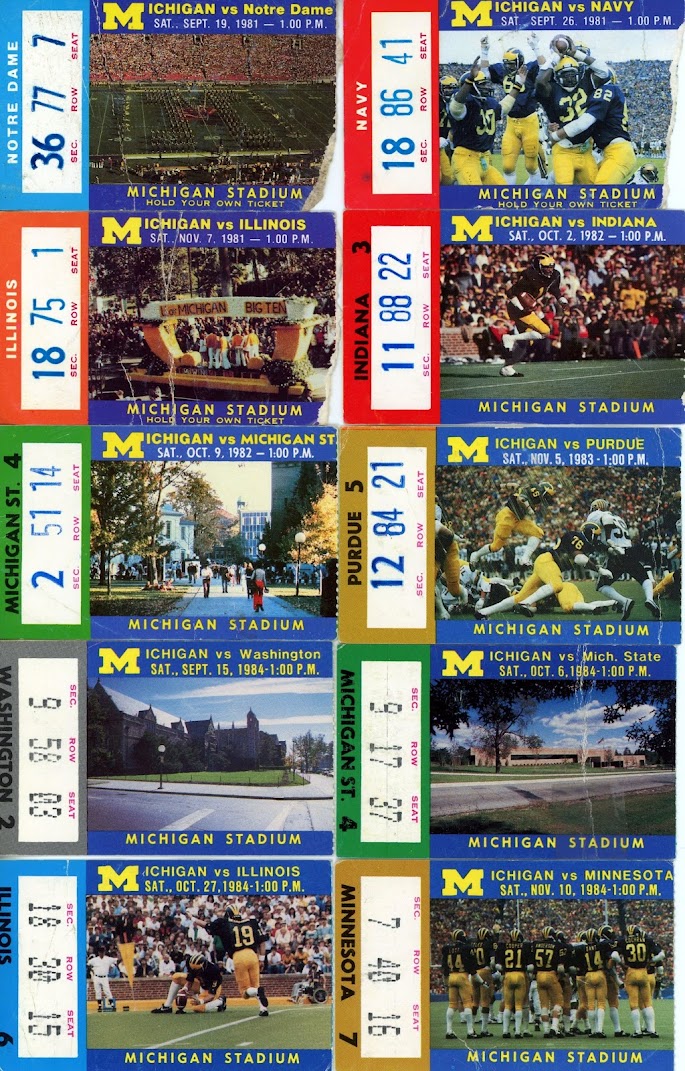 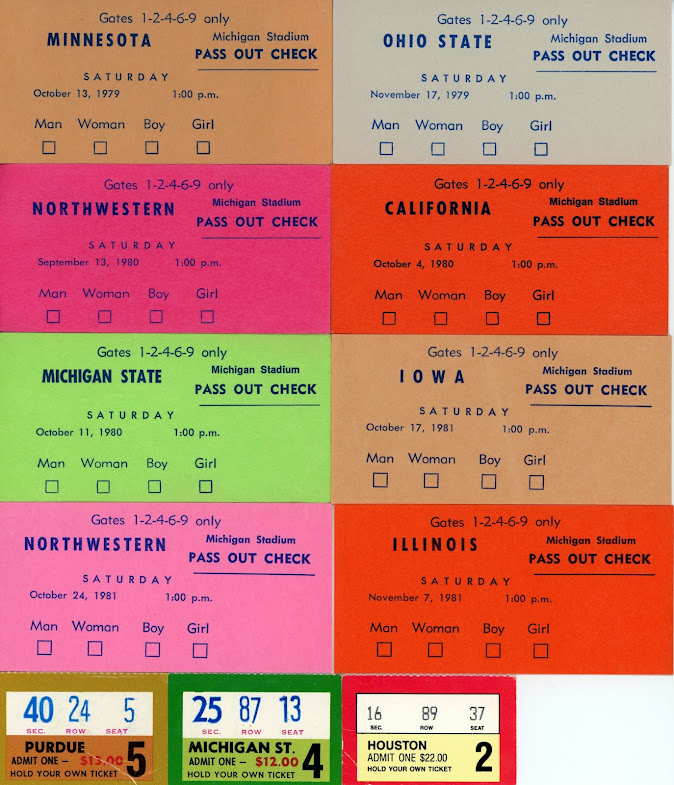 Total record of these: 7-2 (with 2 unknown), with some overlap with the games above.
I'm excited that I'll finally be putting these away after they've been sitting in the box for over two years, and it'll be fun seeing for myself just how big they make each of the players' stacks instead of just relying on a number on a list!
With these covered I'll be back soon, possibly as soon as this holiday weekend, with a card show recap. I hope everyone has a safe and relaxing Fourth of July weekend, even at a time when the Supreme Court has made it impossible to celebrate.
Posted by Dennis at 10:08 PM