Doug of Sports Cards From the Dollar Store has been among the most generous trade partners I've worked with since I started this blog whether we're talking quantity or quality. For the former, this is the 46th package of cards from him that I've posted over here alone, along with 56 I covered on Too Many Manninghams before retiring that blog. Sure, there's some overlap in those, but that's still impressive!
And he's sent plenty of quality over the border to me as well, providing some of the best pieces of many of my PCs, especially when it comes to Michigan Hockey, but many other collections as well.
I'm leading with all that because a couple weeks ago he sent me a tracking number for his latest salvo and mentioned that he'd put a surprisingly hefty amount of insurance on it. What could possibly justify that?
Well the package arrived not that long after, and its size, if not the weight, had me thinking, "Ok, something good's in here, but what could it be?" 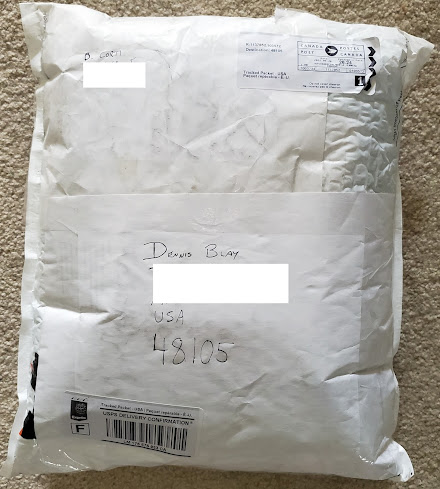 There were a few cards to be had, 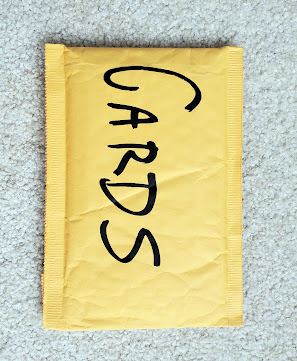 set aside in their own envelope: 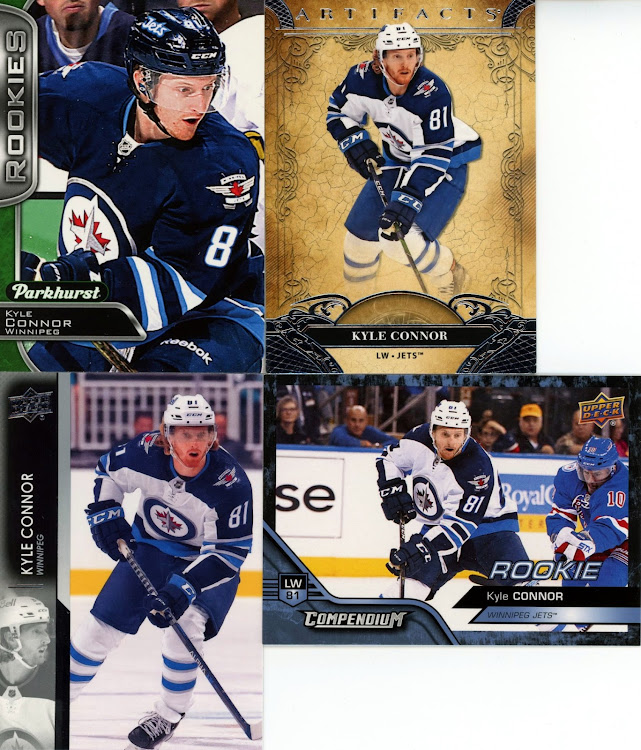 Oh cool, a nice quartet of Kyle Connor, the Michigan native who potted 35 goals and 36 assists in his lone season with UM (2015-16), then bolted for the Jets, who took him #17 overall in '15. All he's done in his five full campaigns since then is average 35 goals a season, including a career high 47 this year (plus 46 assists, also a personal best by a mile). The Lady Byng Award winner ("sportsmanship and gentlemanly conduct combined with a high standard of playing ability") is certainly a great player to build a collection of right now as his future continues to look bright. These give me 17 of him, including a RC (seen above) and a pair of relics.
So those were great but obviously not worth the price of shipping and insurance and size of the envelope alone. What else was in there? 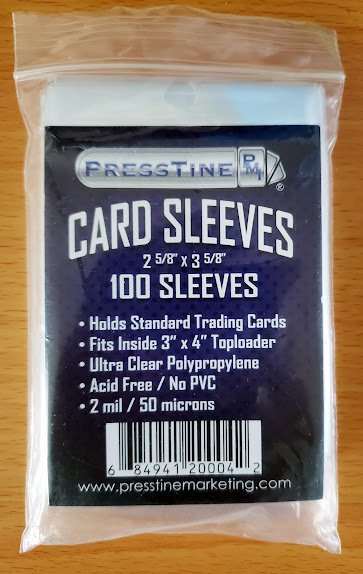 Penny sleeves! PressTine is the company that makes Doug's beloved repacks so I'm betting these were included in one of those. Who can't use more of these?
That's still not all, of course. I mean there was this larger item: 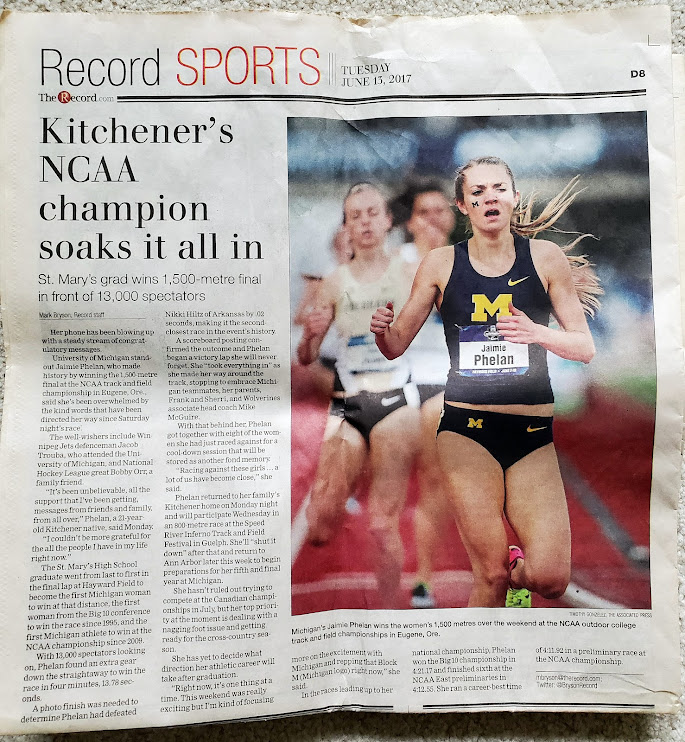 Doug mentioned he'd been meaning to send me this sports section from a 2017 newspaper, The Record, which covers the Waterloo area near his home of Kitchener, Ontario. It's pretty obvious why thanks to that attention-grabbing photo of a runner proudly wearing her block "M". Jaimie Phelan hails from Kitchener as well and had a great career as a Wolverine, and that includes what this story highlights: going from last to first in the 1,500 meter (metre!) final at that year's NCAA track championship, earning her congratulations from fellow Wolverine Jacob Trouba (of hockey, of course), and a "family friend" named Bobby Orr. Not bad at all, young lady! This is a very cool mashup of Doug's hometown and mine and I'll be glad to hang onto this.
So if you're looking at the size of that mailer and doing the math with everything I've covered so far, you're probably guessing there has to be something left, right? Those are all great items but that can't be it, of course?
Of course. 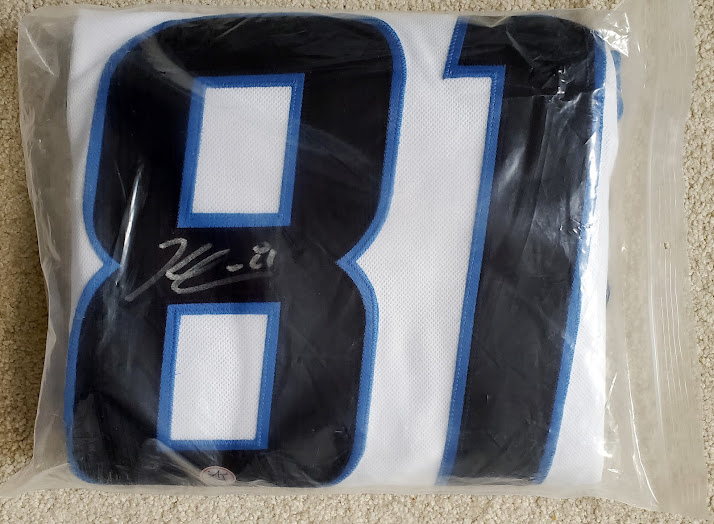 Whoa, a signed jersey, sweet! I'll admit I don't know my NHL numbers that well, I wonder who #81 is? Man, this is exciting! 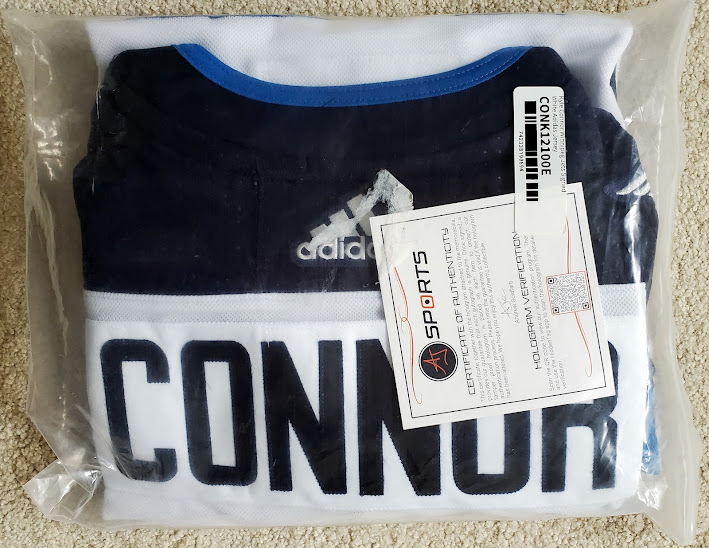 Oh. Oh wow. I think those cards were a hint, guys. This here is most definitely a signed Kyle Connor jersey! Let's open it up and have a nice look at it: 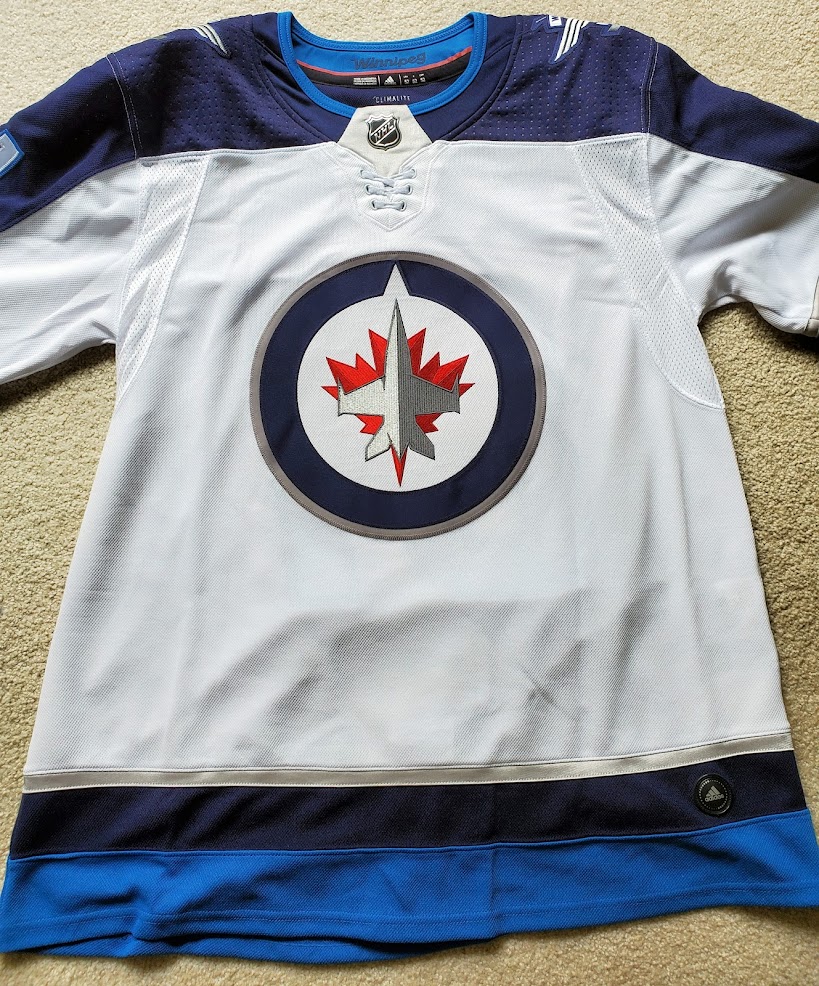 The only hockey jerseys I own are a few versions of Michigan's, and nothing too high quality, so I'm very, very impressed with how nice this one is! That Jets logo patch dead center is T-H-I-C-C. 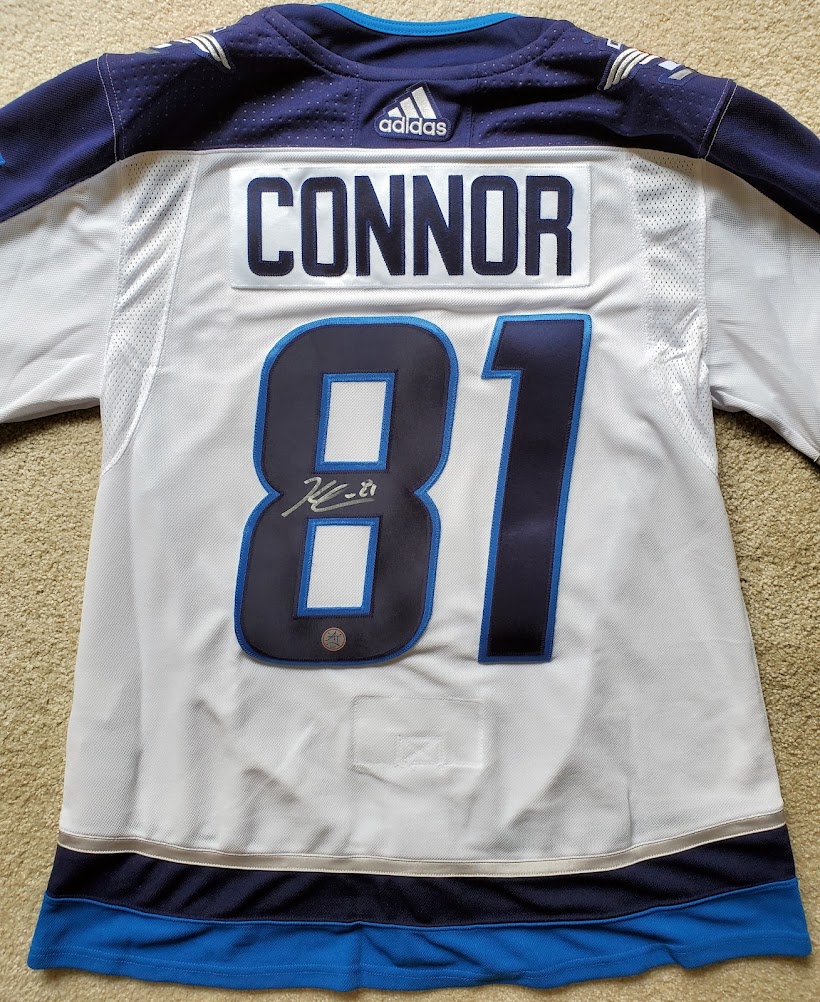 And here's the back while I have it unfolded. Connor's nameplate is huge and in great shape and the numbers are excellent too. Kyle picked a nice place to sign his name plus he added his jersey number, a nice touch. 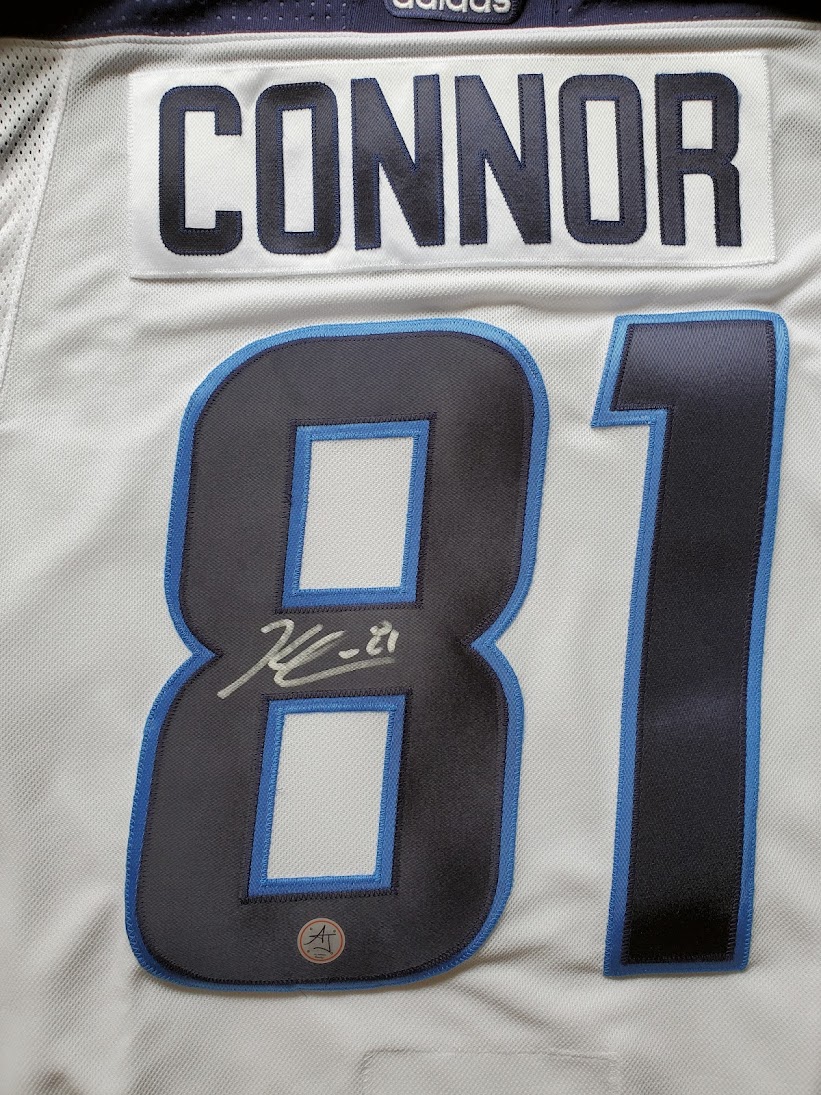 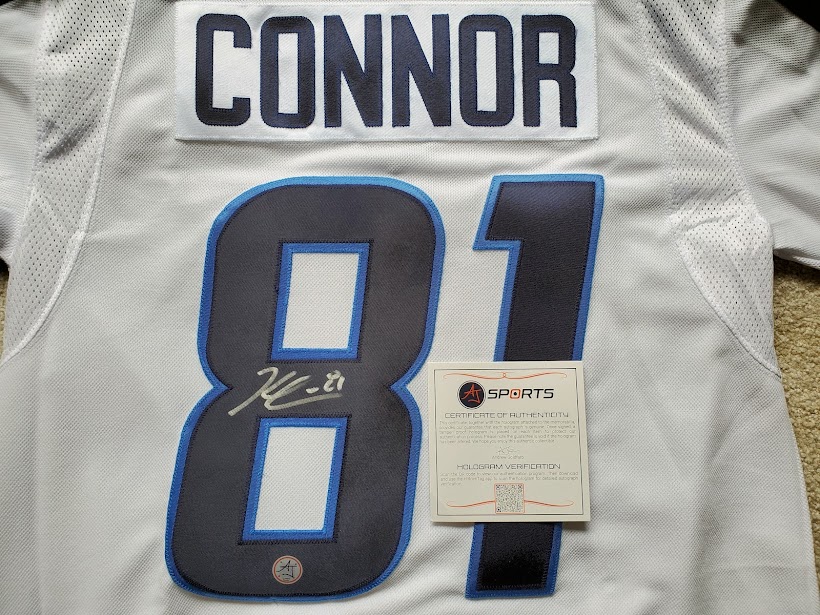 Just for the hell of it I snagged a shot with the jersey and its included COA. I haven't figured out how I'm going to store/display this just yet but I have to say that framing it isn't exactly out of the question since this is most definitely a piece made to be seen!
Doug, you've sent me some doozies over the years, enough that I should put together a post showing off the best of the best, which I'm sure would be very impressive. But I have no idea how I'm going to return the favor on this one. To be sure, I will, but I'll have to do some searching to find something that justifies this extreme level of generosity! Thank you so much for one of the coolest items in my whole collection, a rare add to my autographed memorabilia collection. I look forward to reading comments from some awed and/or jealous readers after posting this! WOW!
Posted by Dennis at 8:26 PM