Today is (or was, depending on when you're reading this) my birthday, and I'm mentioning that mostly because, one, I turned a year old in the weeks between posts, and two, this evening's cards come from a guy who loves collecting people born on his own birthday, February 14. That would be Doug of Sports Cards From the Dollar Store.

I don't collect anyone specifically because they were born on my birthday (though I think that's an awesome sub-collection), but if I did, some of the top choices would include:
Anyway, once again Doug hit my mailbox with a beefy envelope, one this time that was probably 75% toploaders by weight! There was also a ton of fun cardboard goodness and that's exactly what you'll get to see this evening: 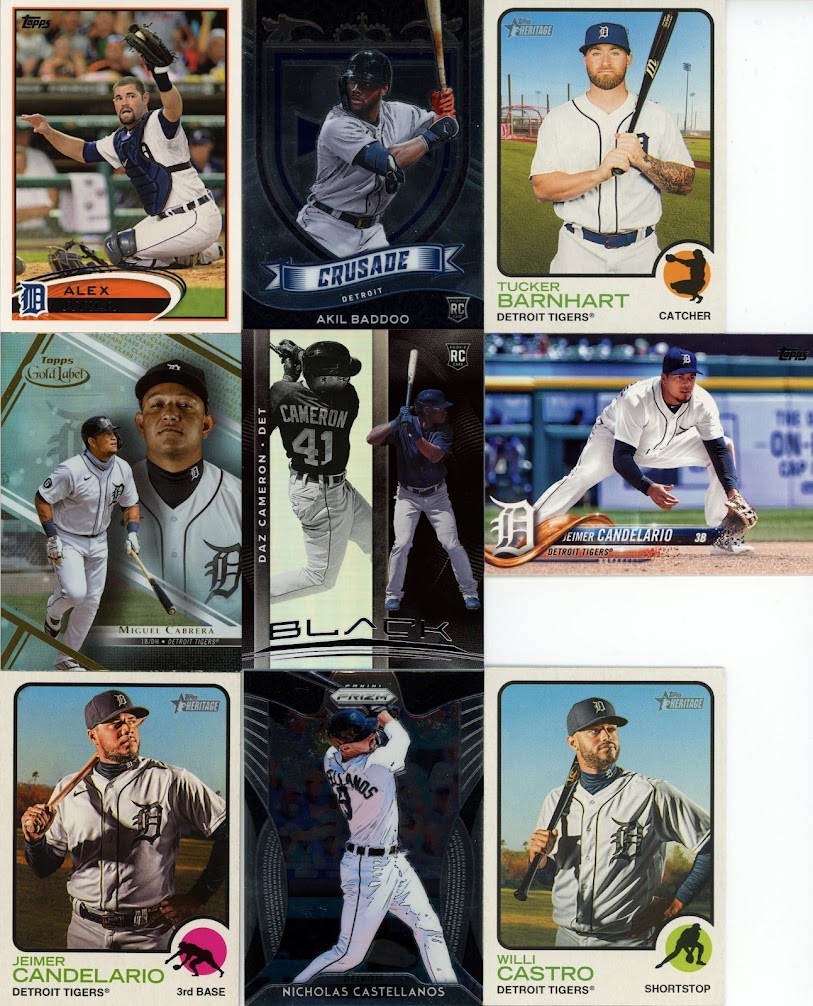 Baseball 1 of 3: current and former Tigers. Most of these aside from Avila are from pretty recent products that I wouldn't have opened myself, such as this year's Heritage (which you'll see more of in a minute). Remember when Baddoo was a rookie instead of a guy in a sophomore slump? There's some nice designs here to look at, though! 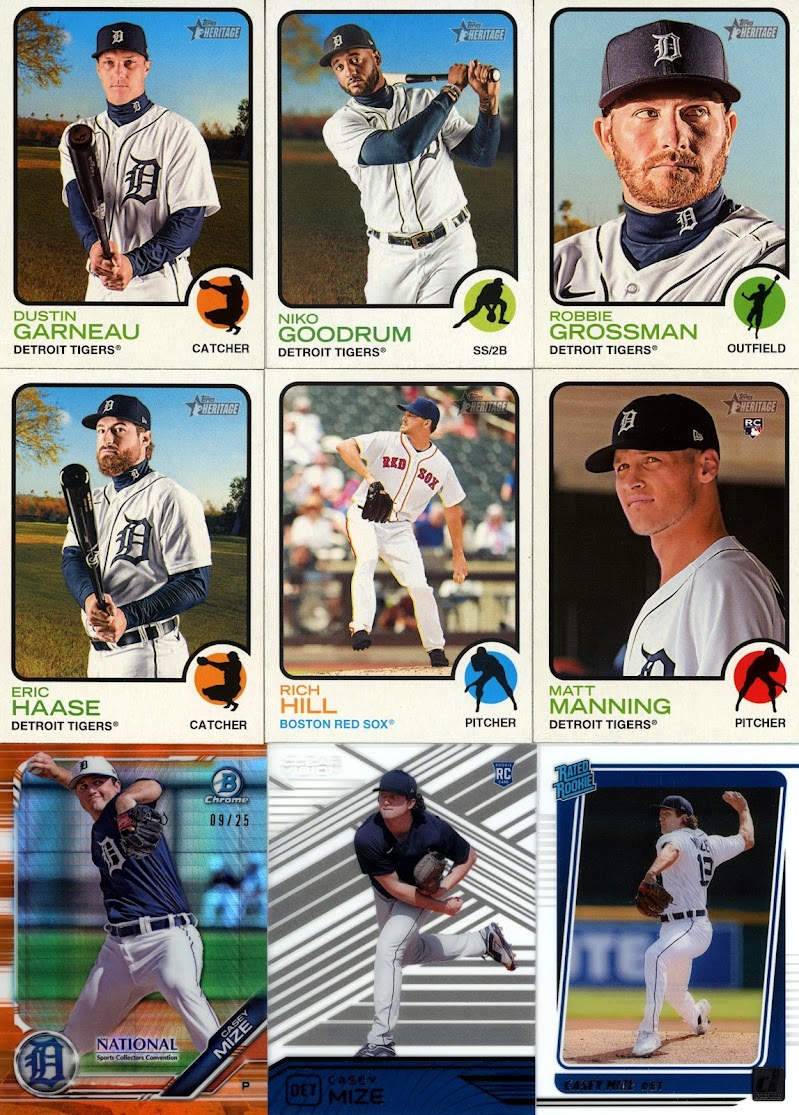 Baseball 2 of 3: starts with more Heritage Tigers, though Niko's long gone. It's nice to add to my minuscule Haase collection, though. And hey, there's a brand new Rich Hill for one of my favorite PCs! They even got him back with his current team, Boston. Also, how about that trio of slick Mize cards? (There's a few more in the next scan too!) The Chrome card is a 2019 National Convention Orange Refractor numbered to just 25, so I'd have to call that one the best in his growing collection. The Chronicles Clear Vision and Clearly Donruss (both acetate but somewhat difficult to tell from the scan) look amazing for "base" cards too. 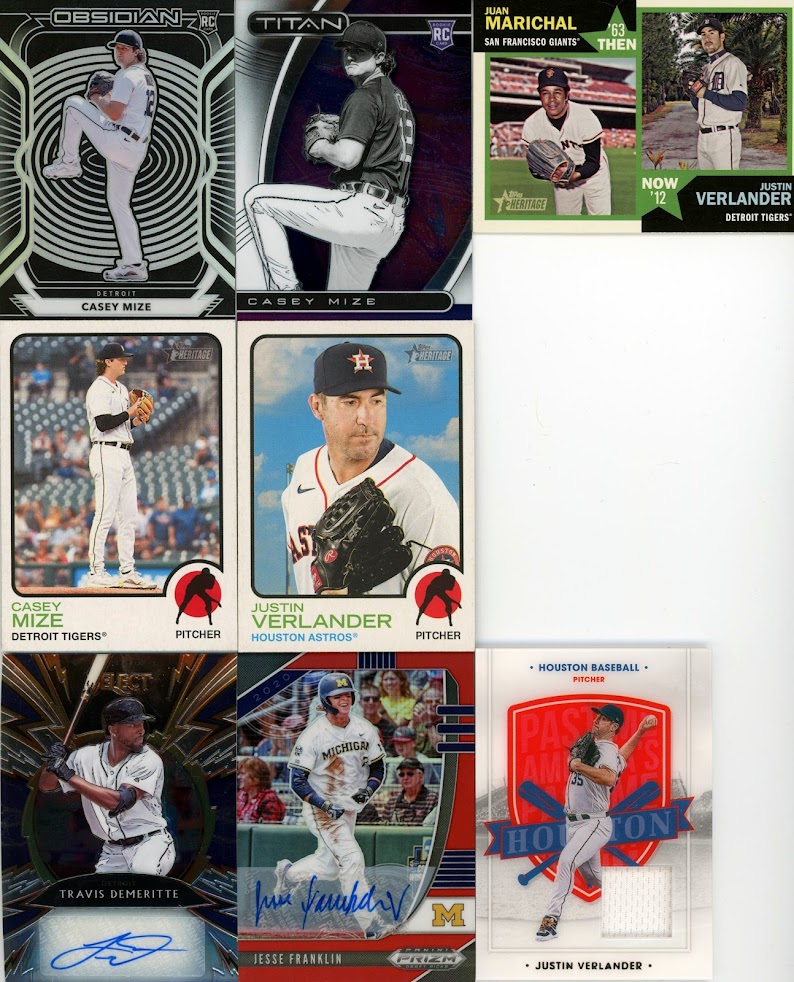 Baseball 3 of 3: includes the rest of the Mize, including two more Chronicles versions, showing off that product's versatility. Two many Verlanders proves to be just right for base/inserts of the ageless wonder.
And then there's some top-notch hits! Demeritte bounced back to Atlanta after flunking out with the Tigers but his 2020 Select auto (#d /199) looks great. There was no way that would overshadow a  colorful Michigan uni signature of Jesse Franklin, numbered to just 50, though--that's a beaut! And one last hit sees a pairing of the previously mentioned Chronicles and Verlander in jersey form. Noice! 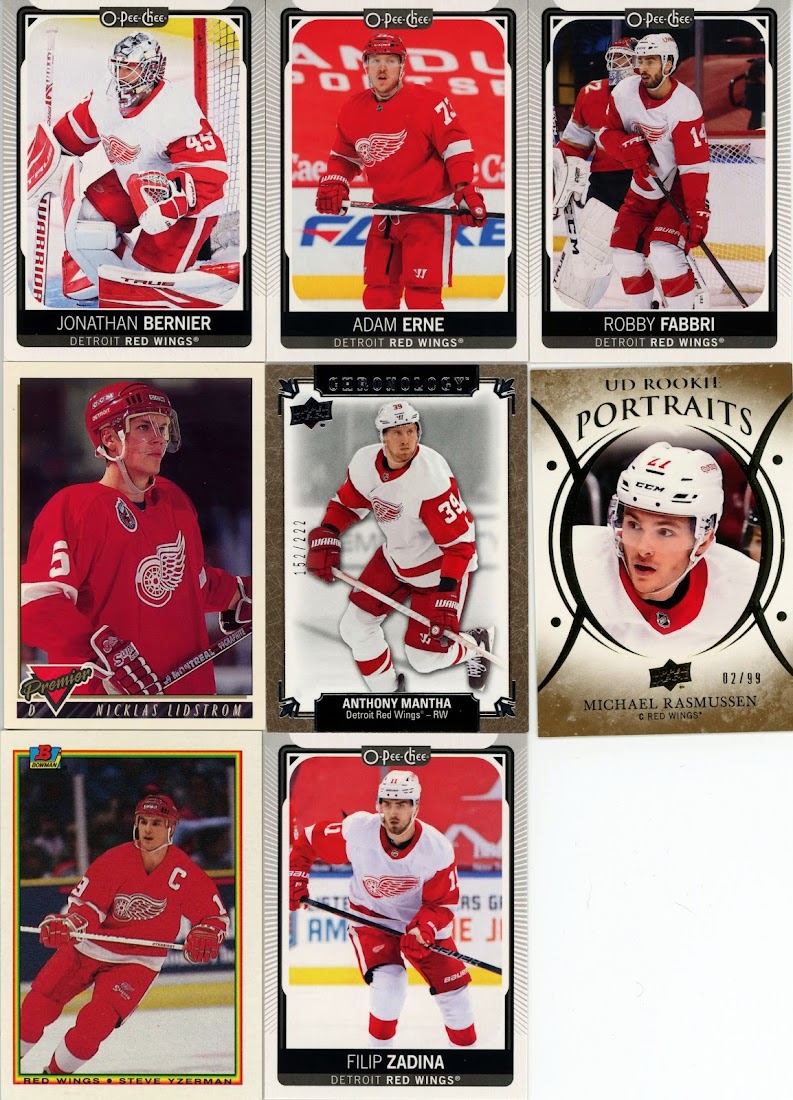 Red Wings 1 of 2: guys like Lidstrom and Yzerman will always be the top draw for me when it comes to Detroit hockey cards in trade packages, but the numbered Mantha and Rasmussen items are great as well. 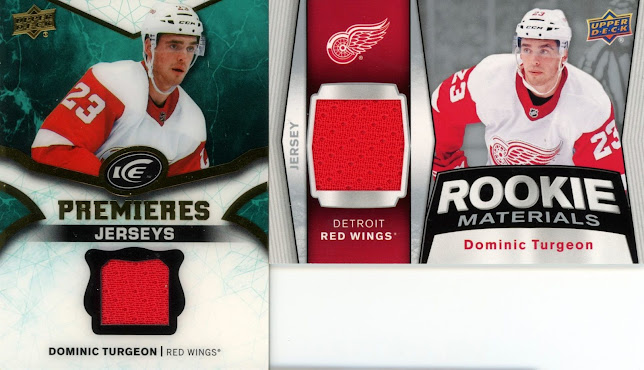 Red Wings 2 of 2: it's a Turgeon two-fer! Turegon was a 2014 third-rounder that appeared in just nine games over two seasons with the Wings, and since then he's signed with the Wild. You couldn't ask for better with these two relic cards that feature bold red jersey swatches, though! 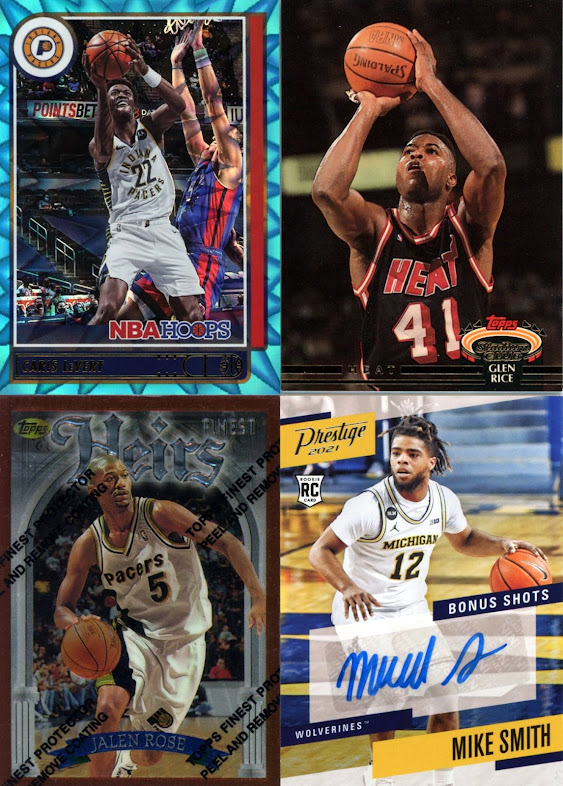 Basketball 1 of 1: That Hoops parallel of Caris LeVert (Teal Explosion) is something to look at! Rice and Rose are Michigan royalty at this point. And another Michigan uni auto is more than welcome to join in the fun! This time it's new basketball PC member Mike Smith out of last year's Panini Chronicles Draft. Smith was a grad transfer who started at Columbia before playing the 2020-21 season in Ann Arbor, one that saw Michigan get to the Elite 8. He's the 31st different subject in my basketball collection and this was a great card to start his PC. 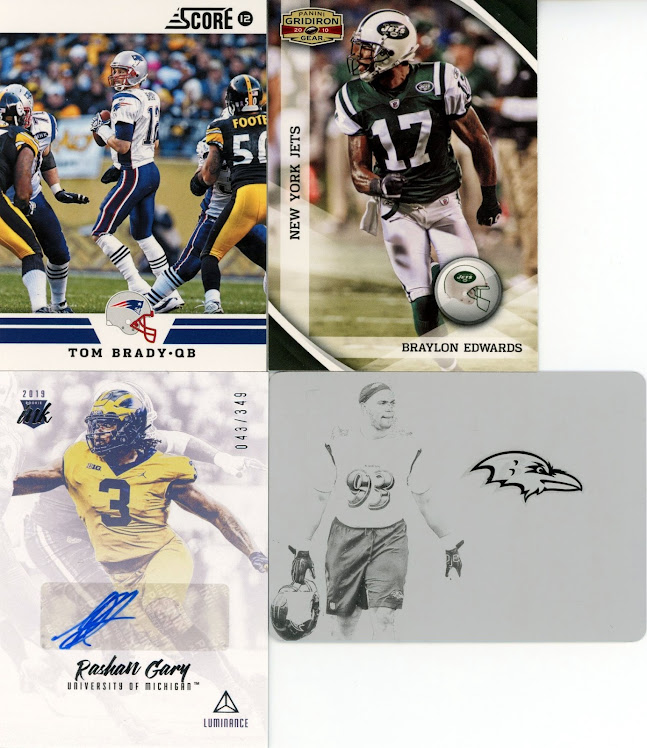 Football 1 of 1: base cards of two football royalty as well are certainly welcome, but I'm sure your eyes went right for the big guns like mine did! He may only use about 40% of the sticker but Rashan Gary's still a draw for me, especially when it's a new autograph of his, and a college uni card to boot! That's auto #5 to go with a plate in his collection. And speaking of plates, the next card was probably the biggest surprise of the package for me. That's former Michigan DL Chris Wormley with the team that drafted him, the Ravens, on a 2017 Panini Unparalleled Black Plate that would have been inserted in that year's Plates & Patches product. Would you believe it's already my second 1/1 out of just four hits of the current Steeler? That's crazy but certainly worthy of its surprise appearance here! 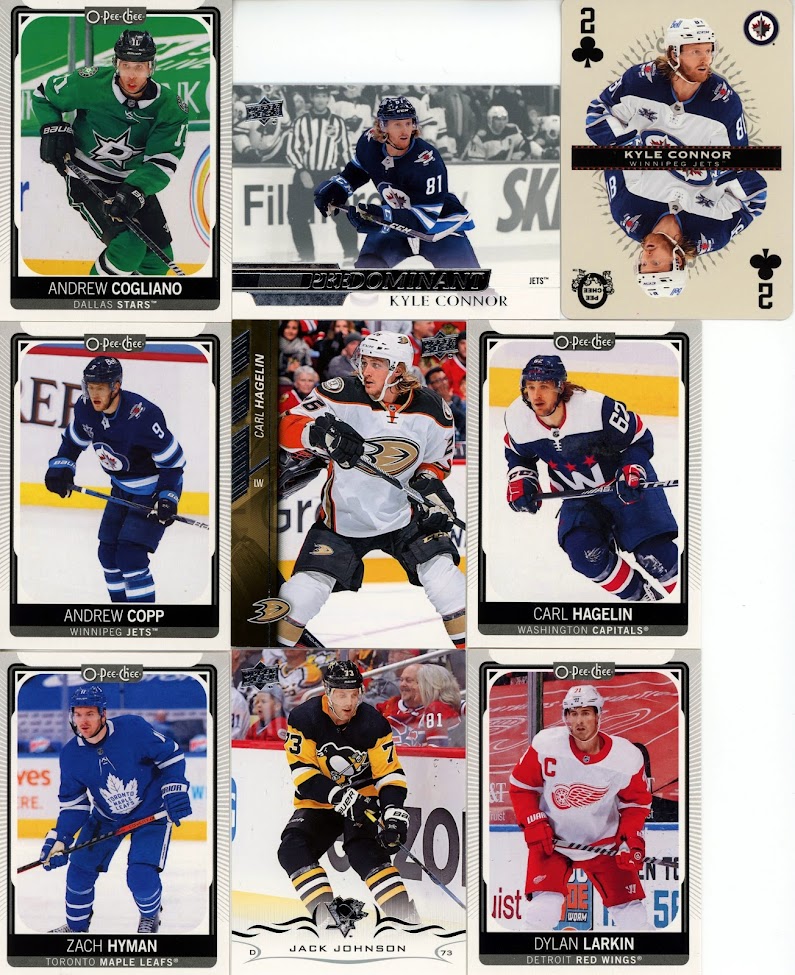 Michigan Hockey 1/3: and as always we end with the sport of honor, hockey. Doug treated me to a good number (if not all) of the Wolverines from 21-22 OPC which looks nice as always. Connor had an excellent season and Copp chipped in a goal and two helpers in the Rangers' win this evening as I was writing this post. I'm mainly pulling for them to win it all this year since two other UMers--Tyler Motte and Jacob Trouba--also play for New York. Colorado with Andrew Cogliano and Jack Johnson (both seen here) would be #2 but they're still Colorado and what self-respecting Wings fan wants to root for them? Speaking of Wings and Wolverines, Dylan Larkin is another of the players Doug included from OPC. 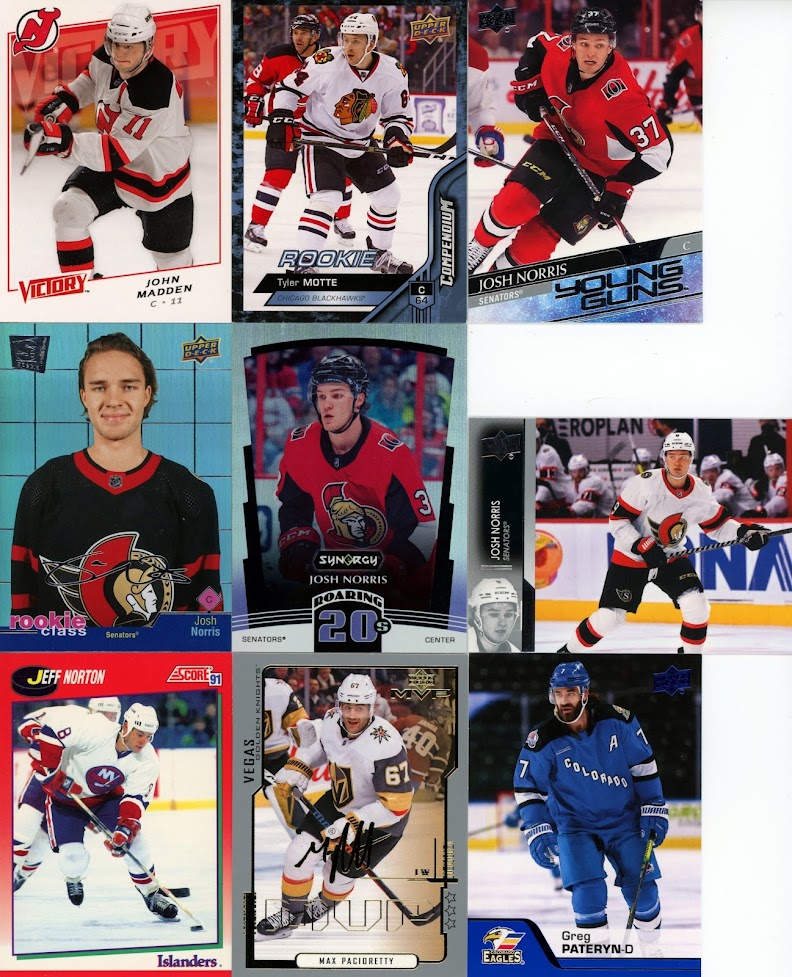 Michigan Hockey 2/3: hey, there's Tyler Motte, whom I just mentioned! There's some other familiar players here as well but it's very clear that Josh Norris is the highlight. A rising star for Doug's beloved Sens, he was a 2017 first-rounder for San Jose but traded to Ottawa the following year. After two solid seasons in Ann Arbor he got a cup of coffee in the NHL in 2019-20, jumped to a 17/18/35 line the following season, and this past year he doubled his goal total to 35! Those are some great looking cards Doug sent me, especially the coveted Young Guns, which I'm sure was a double because nobody just throws those around. 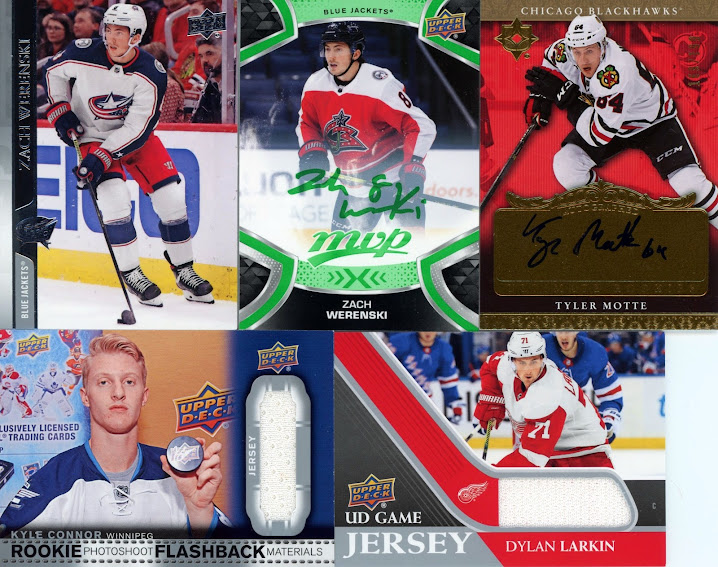 Michigan Hockey 2/3: Werenski is the last of our non-hits here, including that MVP card that LOOKS like an auto but is just the latest version of UD's "Script" parallel that used to look more obviously like something else, e.g. foil. Still a fun card, though.
And then we have some fun hits for the icers as well. Like I said, Connor had a hell of a season, tying for fifth in the league in goals with 47. I'm sure he was much happier about that than he looked on his 2018-19 UD Rookie Photoshoot Flashback Materials jersey card, just my second hit of his.
Wolverwing Dylan Larkin almost equaled his career high in goals and points with 31 and 69, respectively, despite playing on a bad Wings team I hope improves at some point. The hockey stick theme is a fun design on his 2020-21 UD Game Jersey, already hit #9 for me.
And lastly, Motte isn't listed among the playoff leaders in scoring this season but he's no stranger to the playoffs after a run with the 2019-20 Canucks, so who knows if he might be a hero if the Rangers make it all the way to the finals? His signature looks especially sharp on a 2016-17 Ultimate Collection autograph done in the style of 2006-07 Ultimate Collection's auto RCs. Numbered of 199 it shows him pictured with the Blackhawks, the team that drafted him and his first of four franchises to-date. It's my third auto and seventh hit of a guy who put up huge numbers in his junior season at Michigan.
Doug, thanks so much for sending such a large quantity of great cards, especially the hits as usual, that'll be great additions to my collections! I promise not to wait until I age another year to recap the next package you send, but before that I hope I'll be hitting you back. And at least I have plenty of time to try to stock up on 2/14 cards before next February....
Next up should be another blogger trade package, then depending on how things go I would think I'll be getting back to TCDB trade recaps. Until then, I hope the weather continues to warm up and improve in your area and that you're getting some sun and fresh air like I am--you're never too old for that!
Posted by Dennis at 10:07 PM