Buddy of the blog Matt of Sport Card Collectors let me know last week that I could expect a new envelope from him soon, and then Saturday I was happy to find it in my mailbox. Considering its contents the timing was great, and before I watched Michigan face off with Washington under the lights in prime time, I was PWE partying! 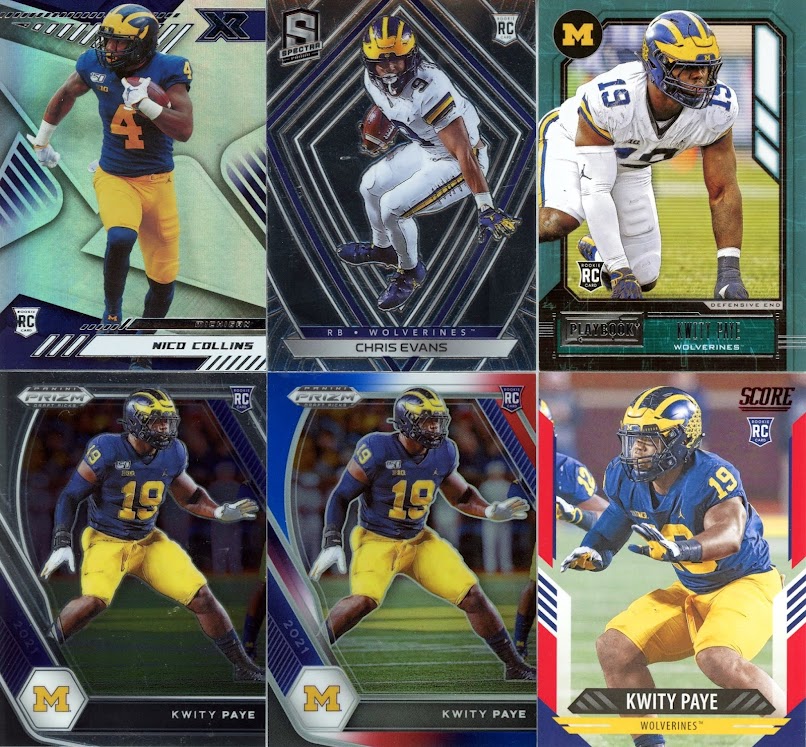 A six-card envelope full of 2021 UM draftees, all of which are in Michigan unis, is about as good as it gets on a college football Saturday. As a reminder, WR Nico Collins went to Houston in the third round; RB Chris Evans was a sixth round choice of the Bengals; and Kwity Paye, a DE with a mean streak, was Indy's first rounder. Nico had one catch in Houston's hilarious win over the Urban Meyer-"led" Jags, Evans doesn't look to have participated or at least recorded a stat as Cincy beat Kirk "Come at me, COVID" Cousins' Vikings, and Paye had three tackles--two solo and one for a loss--plus a fumble recovery as his Colts lost to a Seahawks team that actually let Russell Wilson throw.
Now, as for the cards, the top row all comes from Panini's 2021 Chronicles Draft product. I'm on record as liking the variety of designs as it incorporates multiple brands, and this year Panini seems to have numbered them as one big set instead of multiple inserts. I don't know what that does in terms of what's considered a RC but I don't really care. Anyway, in this case you see, left to right: XR, Spectra, and Playbook. A quick look on TCDB indicates that other brands/designs include Chronicles base, Donruss, Score, Prestige, Illusions, Recon, Status, Donruss Optix, Flux, Select, Rookies & Stars, Legacy, and Playoff. Sheesh!
And then there's the bottom row, which is all "Come Come, Kwity, Kwity, You're so hitty, hitty." Paye's Prizm Draft RC pairs up nicely with the Red, White, and Blue parallel. Speaking of base/parallel combos, I can add the last card you see here, a 2021 Score Red, to the Kwity RC I already have to make another nice pair. There's lots more versions of both for me to chase though my priority will remain the base rookies. 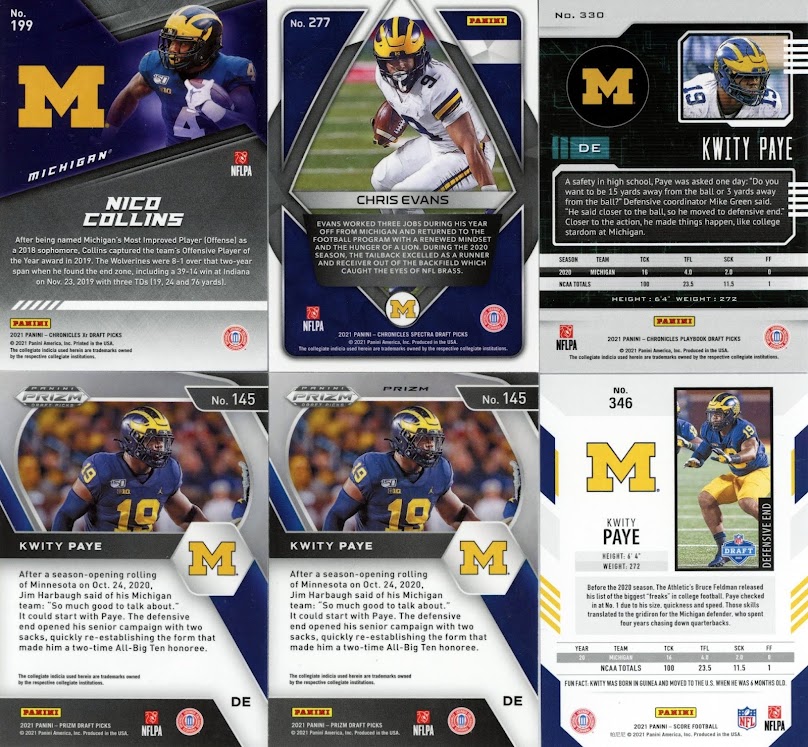 Just six cards to scan, plus I uploaded missing fronts/backs for three cards on TCDB, so here's the backs as well. Lots of block "M"s for my fellow Michigan fans and me.
Matt, thanks for another excellent PWE that proved to be very timely as I enjoyed it before watching my favorite team literally run all over Washington en route to a second win in two games. As I've told you I have lots of stuff piled up for you so at some point in the near future I'll be hitting you back with an envelope of the bubble-with-tracking type!
Posted by Dennis at 7:28 PM