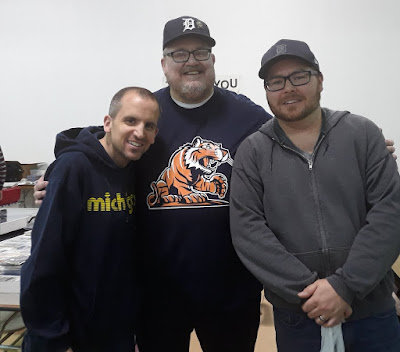 (L-R):  yours truly, John, and Paul.  Apparently I didn't get the facial hair and Tigers hat memo, GUYS
Moving on to more recent shows, today I'll be taking advantage of the holiday to cover the one I hit up a few weeks ago when the stars aligned and I got to meet up with John (John's Big League Baseball Blog) and Paul (Scribbled Ink) in Taylor.  John was able to hang out for a bit before heading a bit further east to watch the Tigers on Star Wars day (May the Fourth), and I got to do more in-person trading with Paul (trade post upcoming!).

My favorite seller had his prices back to normal after last month's dime-mania, but that didn't deter me from finding a bunch of great stuff from the usual dime/quarter/$1/$2 boxes.  Actually, most of what you'll see today came from the latter two options in the form of another hit parade!

Here's what I came home with for myself this time: 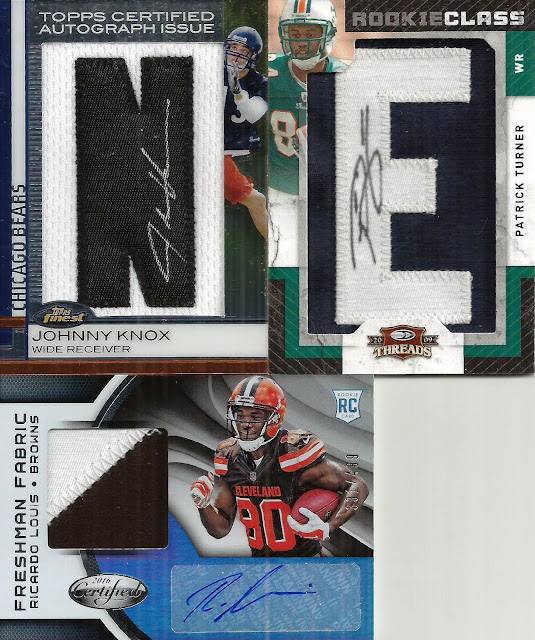 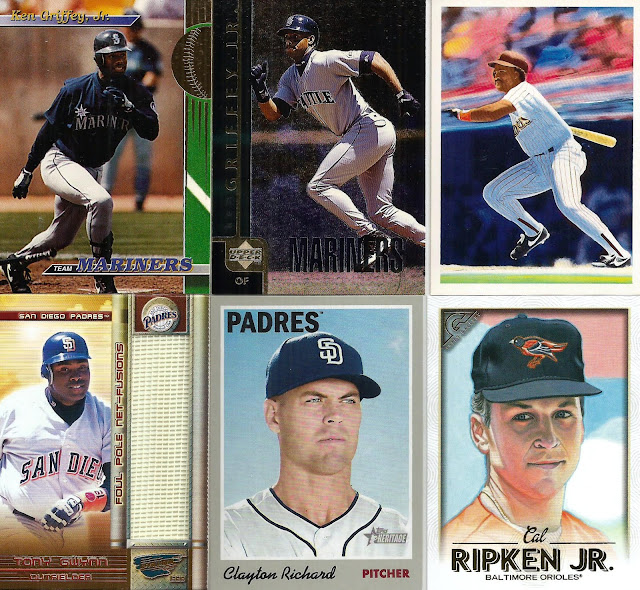 On the baseball PC front I didn't have as much luck as last time, but I did come up with a few gems plus, hey, fewer cards means less work!  Most of these were either from the dime or quarter boxes, starting with a pair of 90s Griffeys:  '93 Mariners Stadium Club and '98 UD Special F/X #1.  1996-98 is probably my favorite three-year run of Upper Deck, and the Special F/X version looked great as well that year.

Then I was feeling like a Gwynner when I found a dime box '89 Scoremasters and, more importantly, a '99 Revolution Foul Pole insert of Mr. Padre in the dollar box.  Pacific came up with some extremely cool inserts like these (and Fielder's Choice, to name another) while helping make the 90s the unquestionably most creative decade for cards as far as I'm concerned.

Last up from baseball is a pair of a pirate's favorite letter, "R".  Clayton Richard's 2019 Heritage base is now off of his checklist thanks to the dime boxes, and I also enjoyed a more recent return to Topps' Gallery product with a 2018 Ripken base.

For whatever reason the $1 and $2 boxes were very kind to my Michigan Football hits collection this month.  I couldn't tell you the last time I came home with twelve such cards from one show, let alone a few combined!

That started with this six pack of 2017 WR draftees Jehu Chesson and Amara Darboh.  While the 2017 Prizm Pink auto of Chesson is just my second signature (and third hit) of him, I followed up on a productive 2018 COMC purchase with another jackpot of Darboh cards.  One of those is from the same set as the Chesson while I also came away with another autograph, an oversized jersey swatch, patch, and jersey/auto, all for either $1 or $2!  As Jeff noted in the comments last time, Darboh seems like a guy with more hits than base/inserts, and I sure get that feeling too with days like this.  I've got 19 and counting! 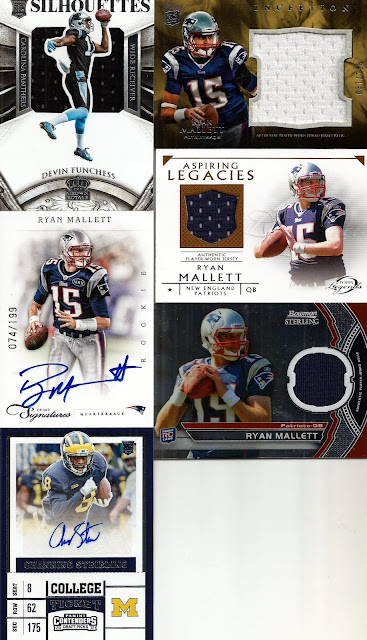 The other six comprise an even split of vertical and horizontal cards.  I haven't added many Devin Funchess hits to my collection since I haven't come across anything that interested me, especially Michigan uni stuff, but I couldn't pass up the 2015 Crown Royale jersey you see above during my shopping spree.

Speaking of going on a bit of a run, I dug out four new Ryan Mallett hits, following up on the lone relic I bought last time.  I'm pretty sure the three jerseys and auto were only a buck each--a far cry from what they would have cost back in 2011.

And last up is another new addition (#219) to the collection.  After three guys joined last month I added DB Channing Stribling on his 2017 Contenders Draft Picks auto/RC.  A four-year contributor, he helped solidify the position for a 2016 squad that did pretty well, leading the team in picks (4) and defended passes (12).  Since going undrafted it seems likely he doesn't have a real NFL future, but he's exactly the type of guy I love to see in these sets as a college fan.

These past two show recaps have me excited about hitting up the next one this coming Saturday.  In the meantime I'm glad to be caught up on just about everything else, so next I'll be looking to cover a bunch of trades plus a one-card eBay purchase.  Hooray for productivity!
Posted by Dennis at 6:56 PM