Now that I've caught up on my 2018 COMC pickups over on TMM, I'm ready to get back to things here.

First, a quick note, speaking of Too Many Manninghams.  I've gotten to the point where I don't feel like working on two blogs since I don't give either enough attention, plus I don't feel like I need the content the two include separated anymore.  This is my original blog and the one that gets the most views, so going forward I'll be posting everything--Michigan stuff included--here.  That way all my posts get the most eyeballs possible, and some of you that are newer readers that didn't venture over to TMM will get a better idea of what I collect!  I reserve the right to change my mind, but for now that's where I'm heading.  I may put in some work over the next week or two getting stuff from over there linked here.

Anyway, on with some cards!

Today I'm recapping April's card show trip to Taylor.  It's been long enough that I don't remember exactly how everything was distributed, but I do recall having a blast because my favorite seller was blowing out all of his lower-end stuff, some of which would have normally been in $0.25 and $0.50 boxes, for $0.10 each.

That led to me grabbing a huge number of things I would have normally ignored, for both myself and trade bait (some of which already went out in packages).  I also made good use of the guy's $1 and $2 boxes, as you'll see below, especially when it came to the Michigan stuff.  In all, I spent $45 very productively.

Read on to see how I did: 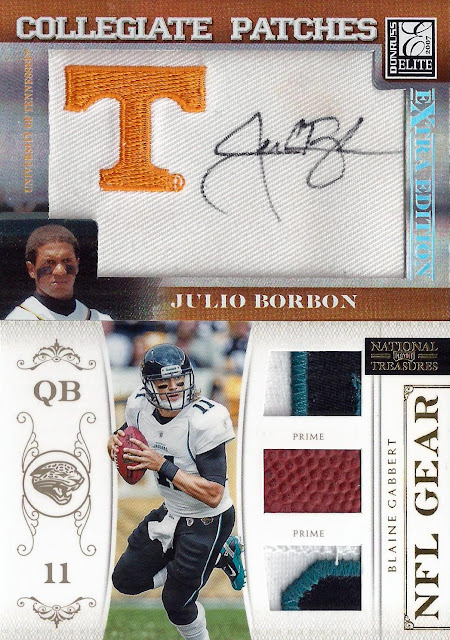 We'll begin with the open trade bait portion.  As I think I mentioned before I've started to grab cheap and interesting stuff here and there with the intention of putting it up for trade on TCDB, but I like showing it off here first because trading through my blog is fun.  A previous show post led to one such envelope, which I'll be posting soon-ish.

Anyway, these hits were either $1 or $2 each:  Borbon is a 2007 Elite Collegiate Patches manupatch auto (#171/250) and Gabbert is from 2012 Playoff National Treasures (#03/49), featuring two prime Jags jersey swatches and a bit of pigskin.  Please claim these in the comments! 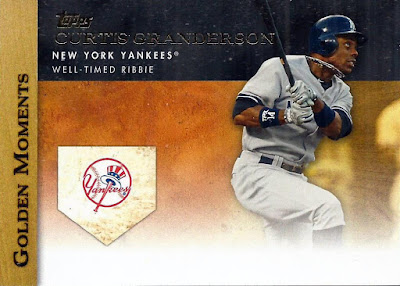 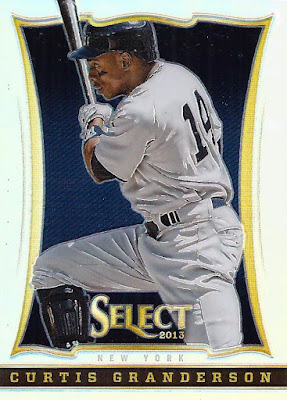 Moving on to the baseball portion, here's a couple dime adds of former blog namesake guy Curtis Granderson.  While I prefer Tigers stuff it's nice to find anything new of him, even in the uniform of the hated Yankees. 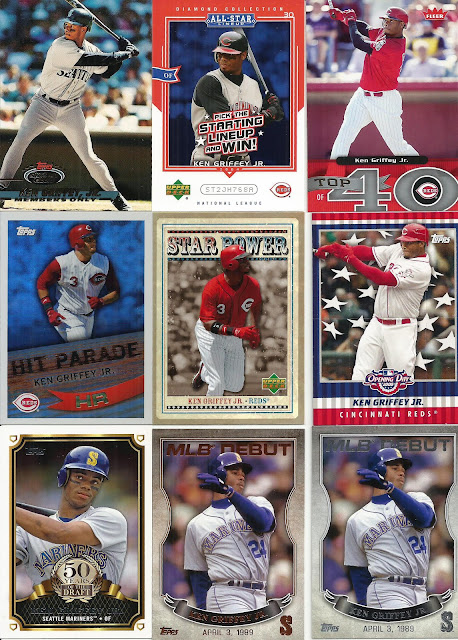 I went a little Griffey crazy this time, and why not for $0.10 apiece?  The '07 Topps Hit Parade insert is cool, but the 2008 Opening Day insert two spots over is even more interesting.  It's called "Flapper Cards" and folds out in a bunch of directions.  The newer Topps insert designs are boring as usual but I do like the photos of young Kenny Jr. 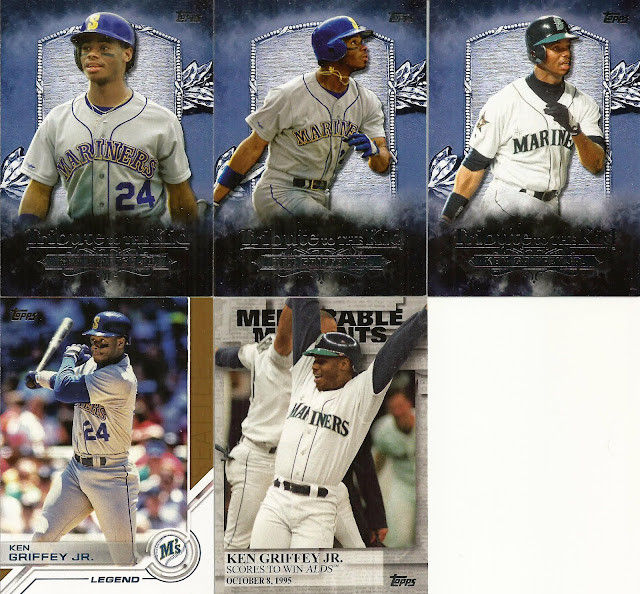 Here's the rest of the vertical Juniors.  While the pair on the bottom is more standard Topps blandness, the Tribute to the Kid set has grabbed my interest and I'm trying to put it together on the cheap.  The trio you see here gives me six of 30, so I'm on my way. 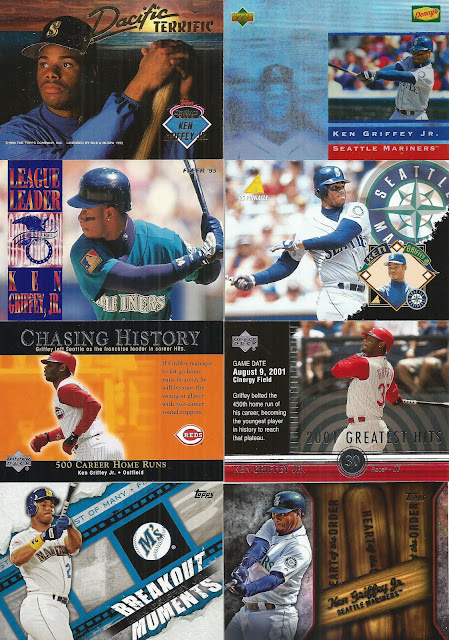 Here's where things get much more interesting as we venture back into the 90s.  Card #1 is a '93 Stadium Club insert shared with what-if guy Darryl Strawberry: 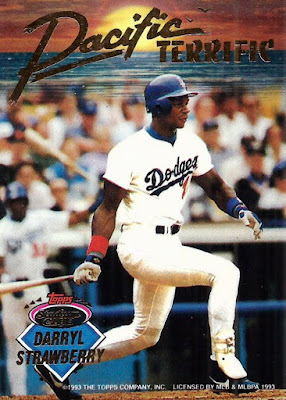 Denny's holograms are always great, including the '95 version seen above, produced by UD.  Meanwhile, the Pinnacle insert below was a mystery to me until I flipped it over and discovered that it was an exchange card for a pin from the 1995 product: 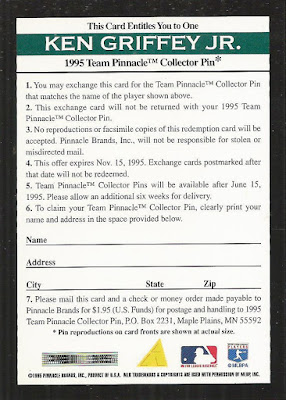 Sweet!  A couple UD inserts of Ken as a Red give way to more recent Topps appearances.  That's an awesome haul of 22 new cards of one of my favorite PCs, all for the low, low price of a dime per. 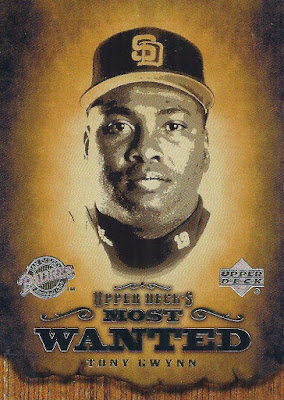 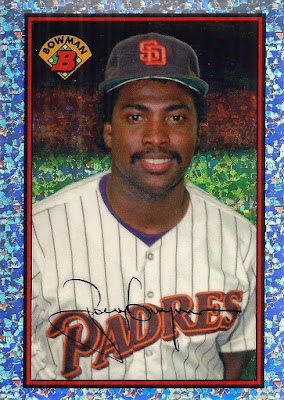 Gwynns were harder to find for whatever reason, but I did come home with this pair.  The super cool 2001 UD insert on the left was a bit of an omen for the day since he seemed to be hiding, but there's always next time! Greg Maddux was kind of in the same boat, but they can't all be like Griffey was that day.  The Finest card is from a 2017 insert called "'94-'95 Recreates", which initially confused me because I thought "That doesn't look like either of those designs!"  Instead these are done up using the '94-'95 Finest basketball look, a pretty reasonable way to change things up. 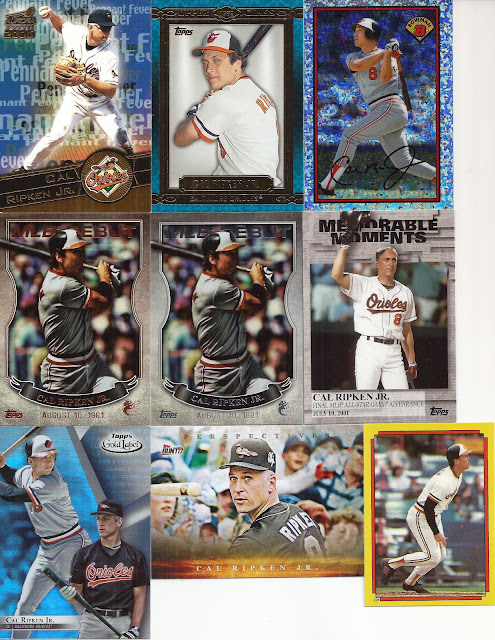 Cal, like his fellow Junior today, wasn't in such short supply, for which I was grateful.  I got to go all the way back to 2000 and Aurora's Pennant Fever insert, one that I thought was a great value for just a dime.  The 2018 Gold Label Class 2 card looks terrific as well.  And I even went old school with a 1988 Topps Sticker, shared with former Expos P Neal Heaton: 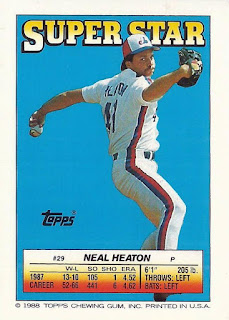 This nine-spot gets me pretty close to 900 Ripkens, a milestone I'll soon be celebrating!

And now we move on to the Wolverines portion, which is a bit smaller in number but in general higher in quality: 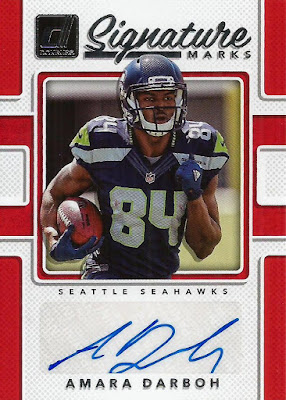 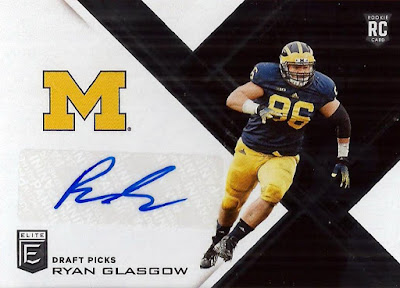 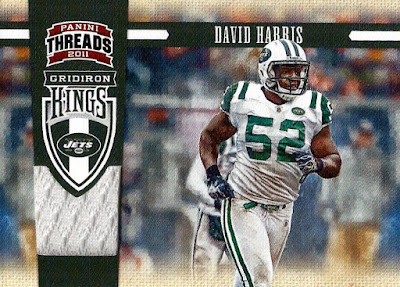 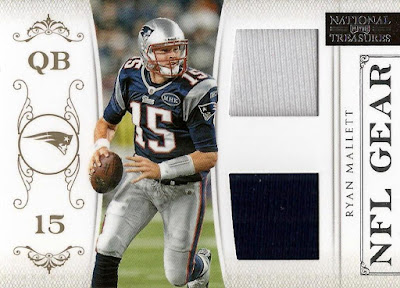 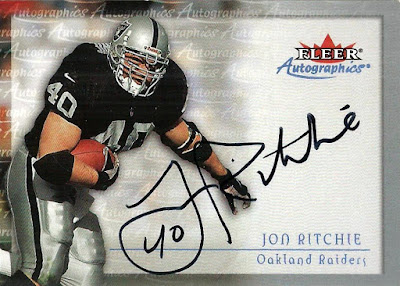 The $1 and $2 boxes treated me quite well in terms of some new football hits.  The Darboh autograph is my 14th hit of his while PC guy and tackling machine David Harris got his 28th (and just third relic).  The other three were all new to the hits collection.

Ryan is one of a number of recent walk-on Glasgow brothers to don the Maize and Blue.  The DT was selected in 2017's 4th round by the Bengals, and he's seen here in his Michigan garb on a 2017 Elite Draft picks auto.

Mallett is well-known in college and pro circles, a QB with a million dollar arm and $0.10 brain (appropriate for today!).  He appeared in 11 2007 games for Michigan, often in place of an injured Chad Henne, then transferred to Arkansas when HC Lloyd Carr retired and turned things over to Rich Rodriguez.  Mallett put up some nice numbers in two seasons with the Razorbacks, then was drafted by the Pats in the third round in 2011.  He bounced around for a few pro seasons and has been out of the league since 2017.  I'm currently collecting his non-Arkansas RCs and thought it would be fun to add one or more hits, like this National Treasures dual jersey (same set as the Gabbert above) #d 19/99.

Like Mallett, Ritchie played a bit for the Wolverines and then transferred.  In his case he got some playing time at RB in '93 and '94, then headed west to an equally excellent school, Stanford.  Jon was taken by Oakland in the third round in '98 and carved out a respectable seven-year career with the Raiders and Eagles.  I'm looking for his non-college uni RCs as well and was happy to pick up a surprise hit of him as well, a 2000 Fleer Tradition Autographics auto.  Man was that a great looking set, and filled with Wolverines too!

The three new guys give me a total of 218 different subjects in that football collection. 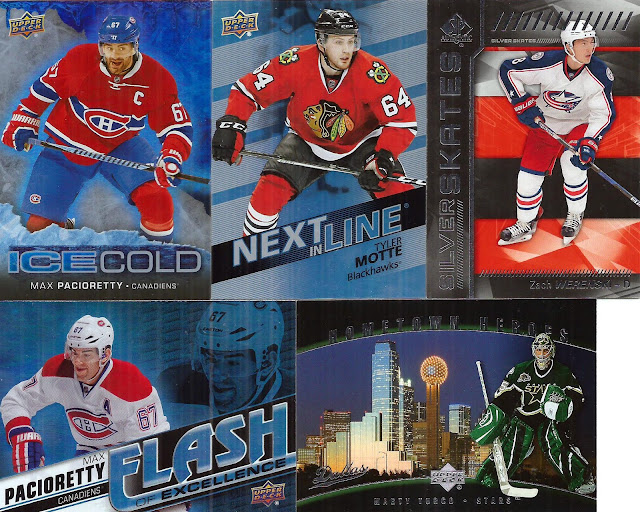 Last up is $0.50 worth of hockey that was absolutely worth it.  In general I may have ignored some of these before, but now that I'm logging a lot of my stuff into TCDB and actually keeping track of what I have, I'm glad to pick them up as well.  The pair of Pacioretty inserts are nice, plus I came up with two recent Wolverines in Motte and Werenski.  But most productive was my latest Marty Turco addition, a 2007-08 Upper Deck insert called Hometown Heroes.  I was actually just down in (or at least near) Dallas a couple weeks ago so this is fairly relevant, plus it just flat out looks great: 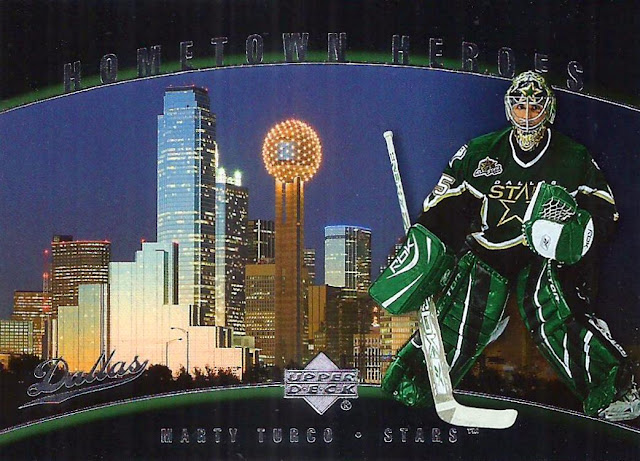 That's it for this show, but I still have May's appearance to get to (which included a double blogger meet-up!) and something like seven trades to cover.  Maybe you can look forward to slightly more frequent posting as I'll be able to focus on just one blog!
Posted by Dennis at 7:11 PM