This is already the second time I'm posting cards from Kin of I Feel Like a Collector Again since he hit me up with a PWE a couple months ago.  Kin collects an interesting mix of Blackhawks stars, WVU alumni, several different MLBers, racing, and more, so I wasn't surprised when he sent me a second envelope that hit three of my PCs along with some Tigers; variety is the spice of life!

Here's what he sent this time: 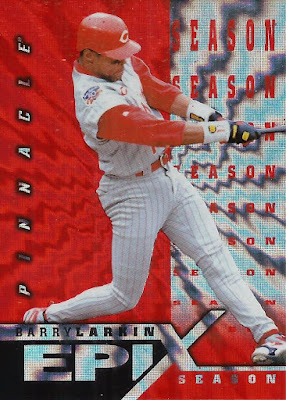 Barry Larkin 1998 Pinnacle Epix Season Orange
As the caption implies, this card is actually orange, but I love that it looks red in the scan since that would make it perfect (though the orange does look just fine).  Epix was a great looking insert back in the 90s so I love examples like this.  Having just recently spent time looking over Larkin cards during COMC's spring cleaning and been disappointed at above-reasonable prices I especially appreciate him sending this my way.  Any Larkins people send my way are great, and 90s inserts rule! (Tag deployed!) 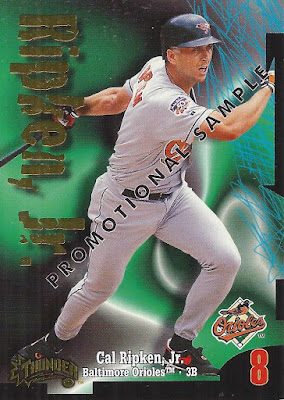 Cal Ripken Jr. 1998 Circa Thunder Promo
Thunder is a product I never really got into because the design wasn't my cup of tea (though as I mentioned a while ago, I completed the '99 Skybox version after winning a free box from Beckett in my past collecting life as a subscriber).  That said, I do enjoy collecting promos and samples like this Ripken that advertises the 1998 Circa version of the product.

Though this isn't always the case, the regular issue is practically identical to the promo.  The production version has yellow "scribbles" along the front right side instead of blue, and the color used for the stats on the back was switched from black to white, but besides those minor points they're the same.  Those of you who collect promos are likely aware that initial mock-ups often feature completely different photos along with other design choices that may ultimately change.

Another cool promo for my Ripken collection! 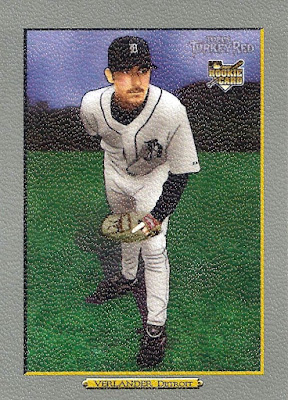 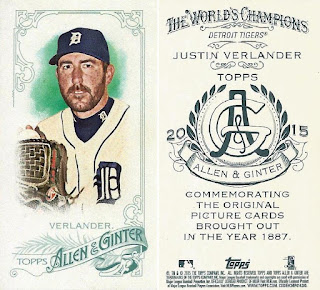 Justin Verlander 2006 Topps Turkey Red (RC)
Justin Verlander 2015 Topps Allen and Ginter Mini No Card Number
The PC portion of this posts ends with a third Verlander card from Kin, who previously sent me a 2011 Chrome Purple Refractor of the namesake of the blog you're currently reading.   On the left is JV's issue from the base set version Topps made of Turkey Red, as opposed to the insert version that was used a couple times.  The pleasantly artsy card gets the "(RC)" notation because he actually appeared on rookie cards in 2005, but the rules of what actually makes a RC are weird.

Next to that is a Mini from A&G's product from two years ago, and this one happens to be a bit more special than it first appears.  I was aware that the backs could be different having collected some of these of other players, but I originally identified it as an A&G Back version until I found that it was missing the usual card number.  A bit of searching confirmed for me that it was the "No Card Number" version, though determining that would have been easier if these added "A&G Back" to the name.  Regardless, while these aren't numbered, they're limited to just 50 copies, meaning this is a very nice addition from Kin indeed! 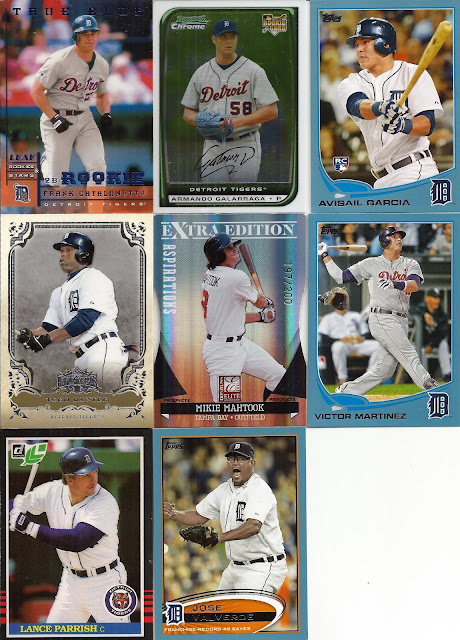 And here's a page of the rest of the Tigers he included.  Catalanotto is one of those Tigers I hated to see the team trade away, especially since he was used to get Juan Gonzalez; I may write up a post about my favorite players to have been traded away soon!  I'm sure everyone still remembers Galarraga's "imperfect perfect game".  Garcia's finally showing the potential that earned him the nickname "Mini Miggy", unfortunately with the division rival Sox.  It was fun having Hunter in Detroit for a couple seasons, long enough for him to appear on this 2013 Triple Threads base.

Mahtook is one of just two current Tigers today, shown here with the team that drafted him #31 overall in 2011, the Rays.  He's joined by V-Mart on one of the scan's three Wal-Mart Blue parallels.  I just posted another card of excellent 80s catcher Lance Parrish in Thursday's post, and I'm 100% positive this Leaf issue is new to me.  Former awesome-then-unreliable closer (e.g. everyone the Tigers have put into the role) Jose Valverde closes things out (pun intended) with another Wal-Mart Blue.

Kin, thanks a ton for another fun envelope!  I'm happy to say that I'll soon be able to respond with a thank you package once I get things shipped from a couple sources, and I promise there'll be at least as much variety as you see here.
Posted by Dennis at 10:27 PM