I'm glad to be getting to this latest series of Sportlots posts since last year's huge haul bled all the way into February of this year!  Maybe I'll get these done sooner.

Back in September I kicked off another Sportlots spree for a few reasons:  completing (or re-completing, more on that in a bit) some sets, snagging some set-finishers for Chris over at Nachos Grande, scoring some new stuff for my PCs (including the supercollections), knocking some cards off my Michigan Football rookies checklist, and bulking up some neglected Tigers PCs.

I checked out with some 439 cards in my cart spread across 11 sellers, at a total cost of a bit over $100.  One seller wasn't offering a Sportlots Box shipping discount so those 10 cards arrived to me directly while the other 10 orders went through that option which can save you a ton on shipping.  Case in point:  instead of coughing up a crazy $50+ for those 10 packages, I ponied up $10.78 in Box shipping costs to the sellers, and then another $9.46 to have the site send me everything at once.  That means I saved a cool $30!

It's gonna take me a bit to show off the roughly 400 cards I got for myself, but today I'm starting with the stuff that polished off a few sets for myself, plus a couple bonus items. 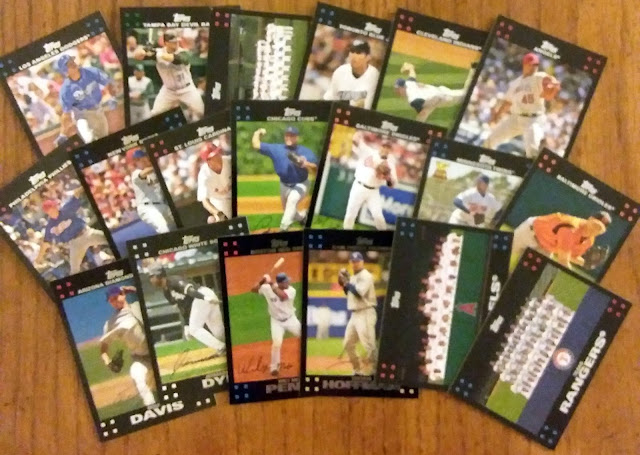 This group of 19 base cards from 2007 Topps may look normal to you, and that's because they are.  And that's a good thing because they replaced a bunch of Series II Red Back "parallels" I'd mistakenly filed into what I thought was a complete base set.  If you're gonna do it, you may as well do it right, and so I grabbed these to re-complete my set so I could dump those moronic "inserts."

The other photo I took with my tablet (my phone camera's not in good shape and I didn't feel like scanning all of these) represents the 23 cards I needed to sew up the 1993 Classic Four Sport near set I scored in my Nextdoor haul a few months ago.  None of these broke the bank--I think all were at or near the site's $0.18 minimum--and I'm happy to have a finished version of this college/amateur-themed set.  Notable names up there include Chris Webber and Penny Hardaway (twice each), Shaq, Drew Bledsoe, former Michigan QB Elvis Grbac, Jerome Bettis, terrific ladies of hockey Manon Rheaume and Cammi Granato, and A-Rod. 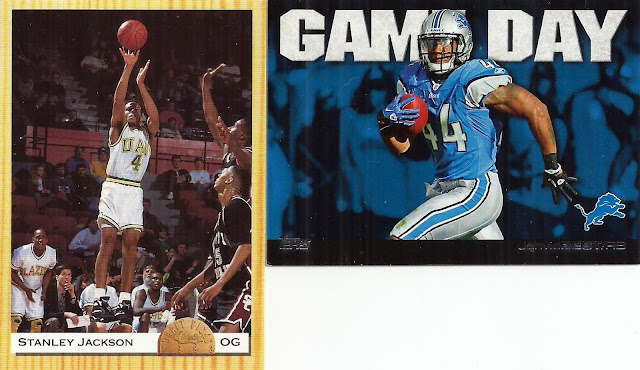 Ok, sure, I can scan just a couple cards.  Jackson was the last card I needed from the '93 Classic Basketball Draft set, one that also came out of the Nextdoor freebie lot.  And a 2011 Topps Gameday insert of promising (at the time) second-year RB Jahvid Best, re-completes another set that I'd thought was already done.  I realized it wasn't when I went to fill in some missing scans on TCDB and couldn't locate this one.  Crisis averted! 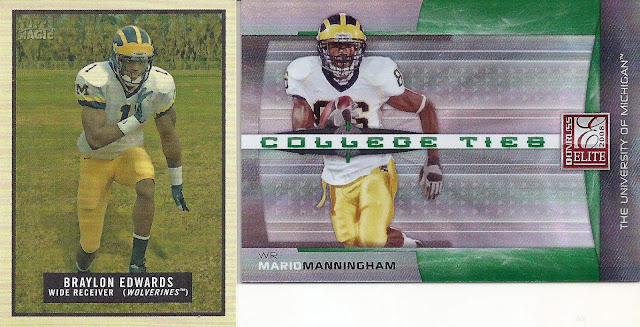 I added these two here since they wouldn't really fit in anywhere else for the rest of this series.  Braylon's card, a 2009 Topps Magic Mini, was a wantlist item of sorts as I'm working on landing all 15 Wolverines from that parallel after locking up all of the base versions.  I'm still short Tom Brady's and Marlin Jackson's minis from the product.

Meanwhile, I couldn't resist adding a new college uni insert of Super Mario Manningham, since combined shipping is the name of the game when it comes to Sportlots.  This here is a 2008 Donruss Elite College Ties Green (#325/800) offering, and it pairs up nicely with the much better looking Gold version I own that's twice as rare.  It seems I just can't have too many cards of this guy.

Stay tuned for more posts covering the categories I mentioned above.  Those of you who love classic Tigers players are in for a treat, I can promise you that!
Posted by Dennis at 8:16 PM