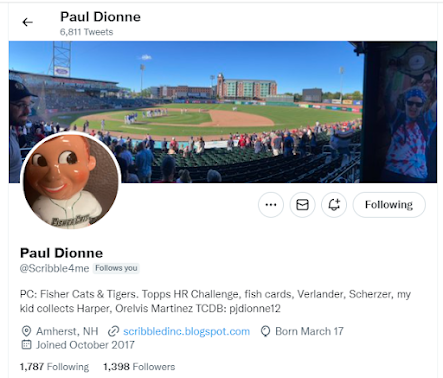 I've been slacking long enough in 2023, so let's start looking at cards that are new to me this year! Tonight I have this year's first trade package courtesy of buddy of the blog Paul, of the defunct Scribbled Ink, who can still be found tweeting at @Scribble4me.
A bit earlier this month he let me know to expect something, and not long after I had the following on my porch:

Quick backstory there: among the things I sent Paul for Christmas was a signed Marcel Dionne jersey. It was a crazy good deal and I couldn't pass it up, and I'm glad he appreciated it. I'll show off what was in the box at the end but first we'll dive into the "CARDS" envelope.
(Please note that Paul sent much more than what you see here but I was too lazy to scan most of the dupes.) 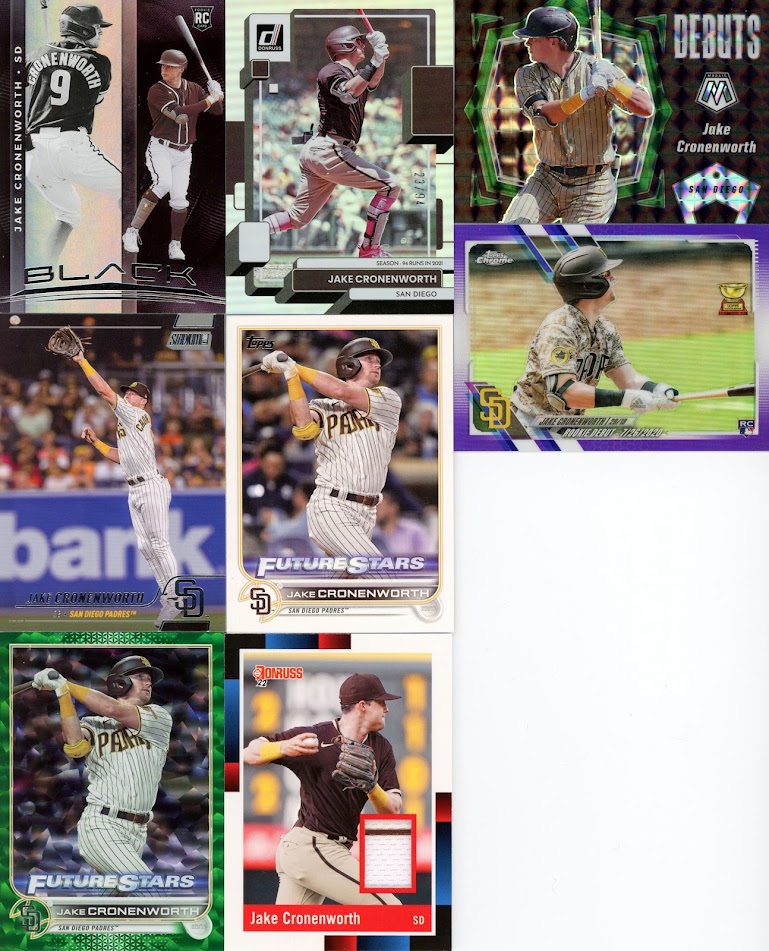 The biggest former Wolverine currently playing not nicknamed "Dick Mountain," Cronenworth is one of my favorite recent PCs. That collection got a very nice bump thanks to Paul. Highlights include Stadium Club, some Topps and Chrome color, a sweet Donruss Season Stat Line parallel numbered /94 (for the total of runs he scored in 2021), and a Retro '88 jersey from the same '22 Donruss product. Very nice! I now have a pair each of relics and autos of Mr. CroneZone, and TCDB tells me I have 75 total cards, which is excellent (and also tops on the site for now)! 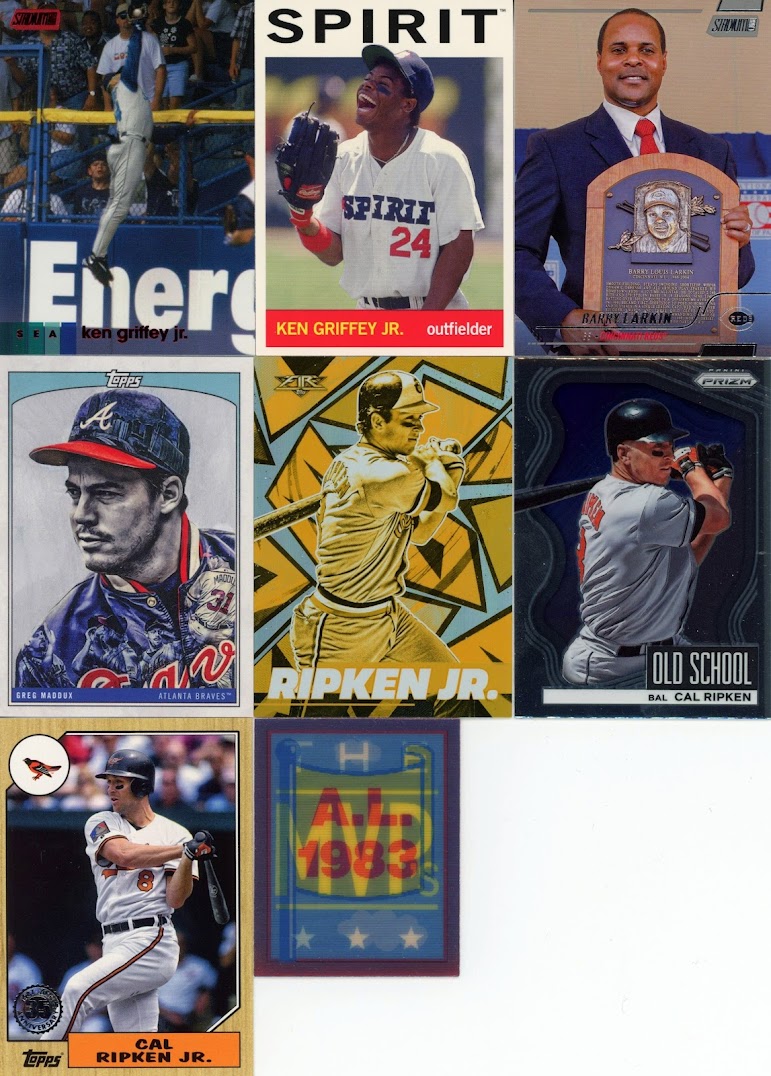 Paul hit a few of my other big PCs while he was at it. The Stadium Club Griffey (Red parallel) is a stunner, and of course I recognize the play it captures (check out a video and more here) as it happened in Tiger Stadium back in '98. What. A. Catch! The Topps Pro Debut insert of a young Junior is very cool too. I'm glad Paul also included a Stadium Club base of Kenny's former teammate Larkin as it captures Barry's Hall of Fame induction in 2012. I still need to grab his HOF plaque postcard, now that I think about it!
The one Maddux card in the package was a literal work of art, produced by talented artist Lauren Taylor. Three other players I collect can be found in the product and I might have to track their cards down as well because this beauty is a huge step up from the MSPaint-quality, drug-induced nightmares that came out of the Project sets.
And what would a baseball recap be without my biggest PC, well on its way to 1200 cards? Cal gets four new items: a couple Topps inserts, a chase card from Prizm, and one of Score's old trivia holograms. Is anyone else sick of 1987 Topps all over again? 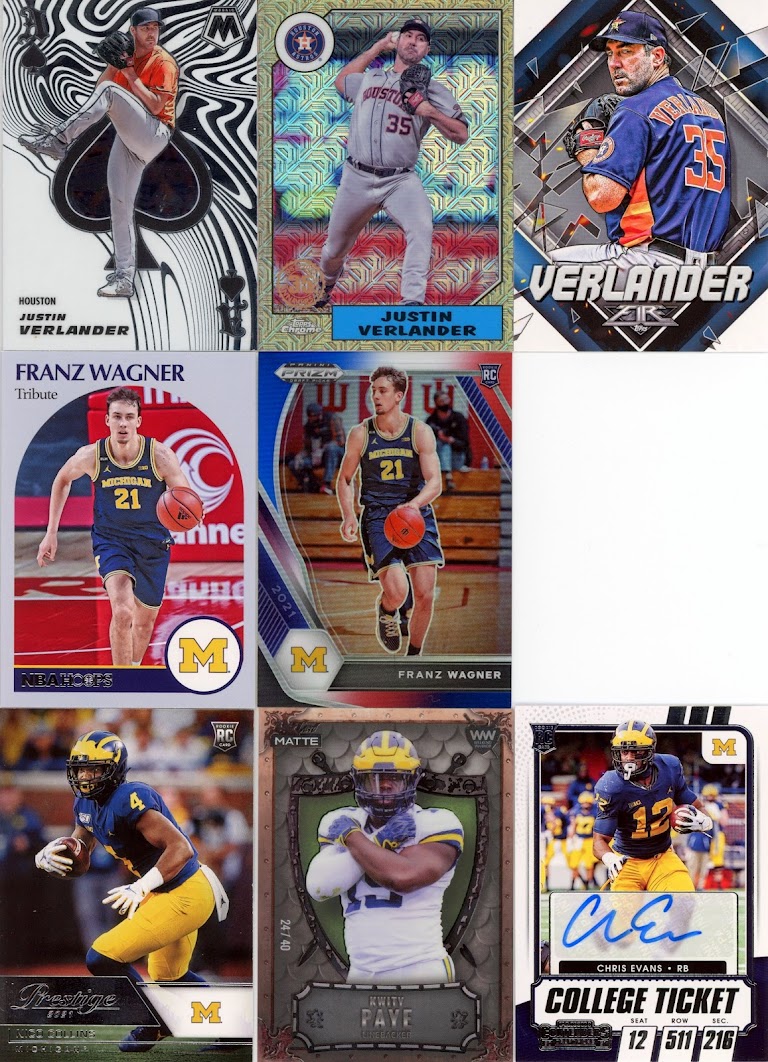 Paul also added a trio of Verlanders, and I'd say the Mosaic insert with its "Aces" motif is just too cool to beat, but the "Mojo" Refractor of the '87 Topps card is a worthy contender.
On the basketball side of things we have Mo's little bro and teammate Franz Wagner, who's having a pretty nice season for the Magic. The Chronicles card with the old Hoops design really takes me back while the Prizm parallel is all kinds of patriotic. Bonus points for both being including college action shots!
Closing out the cardboard portion, Paul repeated that feat with the football items he included. Nico's Prestige card from '21 hails from the previously mentioned Chronicles, and it's a good reminder of why I tend to enjoy the brand's college draft cards. Paye's insert from the wildly confusing Wild Card Matte product appears to be called "Weekend Warriors Gold/Green Shield" if TCDB's checklist is to be trusted (and that's the one I'd trust the most, so...) and that comes with a cool Wolverines shot and numbering on the front /40. And then there's the second cool hit of the package: a '21 Contenders Draft auto/RC of Bengals RB Chris Evans. It's just my second of the versatile speedster after I added one from COMC, and his signature looks nice on the typically pleasing Contenders design. Nice find!
(Here I'll insert a quick note that I'm unofficially over 2500 Michigan sports hits, so depending on when I can verify those, I may have a celebration post forthcoming. In the meantime you can always see my collection stats on the bar on the right.)
So as Mr. Pitt would say,

Well I'll be happy to show you: 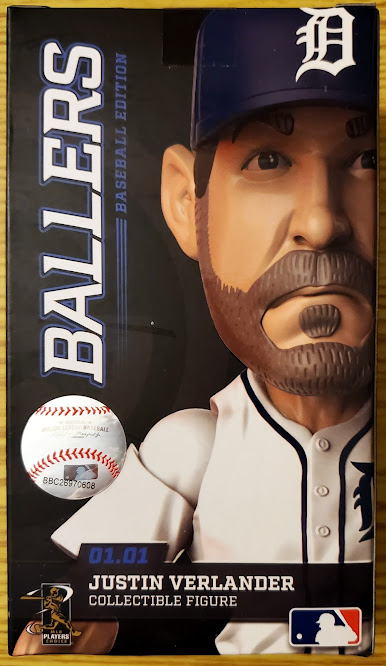 It's another box! I can't remember if I'd seen these figures before but I have to say they look really good. The bottom of the box has a 2017 date on it and also mentions Loot Crate so I wonder if these were exclusive to those subscription boxes. The figures are sculpted quite nicely and the box boasts the number of articulation points. My search shows that batters come with a plate while pitchers get a mound.

Here's a look at JV out of the box. The little pegs are places where you can attach the figure with holes in its feet if you want to pose it that way. I think the creator did a pretty good job capturing Verlander, with the only real goofiness being the oversized heads, which is actually kind of fun.
I'm going to leave this one out of the box and put it out on display with some of my other stuff like bobbleheads. Big thanks to Paul for including such a cool item of my blog's (current) namesake and a guy we both love to collect.
Paul, thanks for always keeping things interesting whenever you send me a package! I'm glad you liked your Christmas cards and I'm already hard at work on a new mailer for you which will hopefully be ready after another show or two.
Up next is trade package #2 from another one of my Christmas card targets (who should be receiving their envelope in the next day or so, actually).
Posted by Dennis at 8:29 PM