What do I have for you today? Four more deals! These are a bit larger so there's more scans, and I'll try to keep the writing to a minimum so I can just get these done and put away.

sportzcommish, a.k.a. Joshua, is definitely one of the best traders on the site, and I learned that while helping the member who ran last year's TCDB Secret Santa (Dan, vrooomed, whom I've mentioned a few times here) make things right for a number of folks who participated in good faith and got stiffed by some jackasses who didn't send their end. Joshua sent some stuff to a few of those folks, and I thought I'd show my appreciation by sending him almost 120 cards from his wantlist, pretty much all of which came from my Facebook collection.
While adding those to a transaction so they could automatically get added to his collection when he received them, I came up with around 50 cards I could use from his tradelist, so I decided to let him know why I was PIFing some stuff to him while asking if he'd like to make a deal, to which he agreed.
I got the following mix of cards of all four sports, including Tigers, baseball PCs, vintage, and more!: 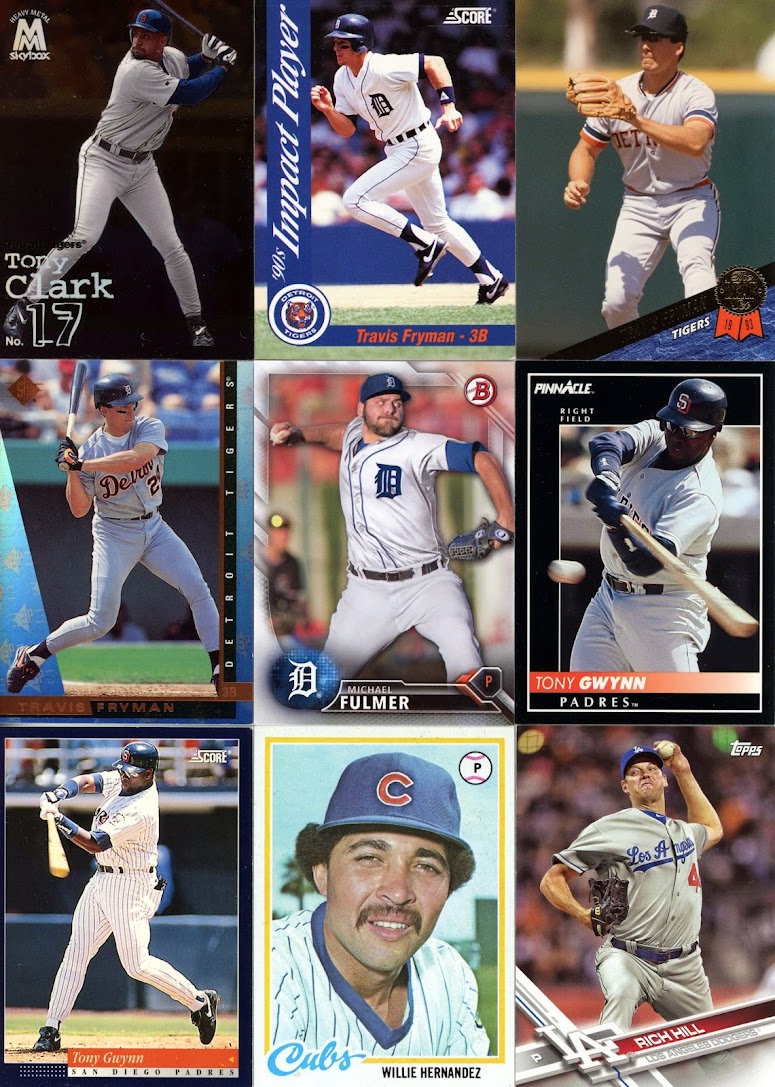 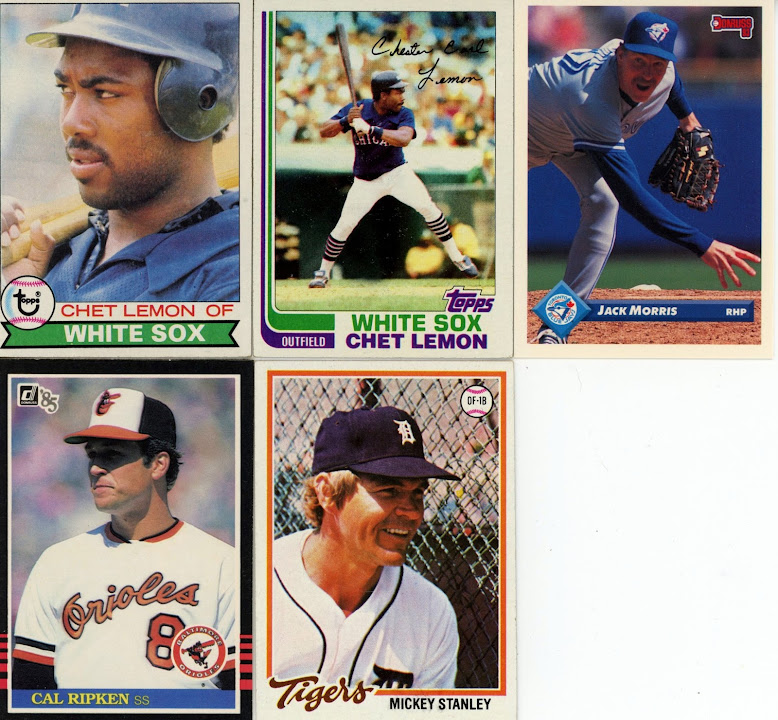 These four guys each won at least one ring (Morris, of course, earned three). 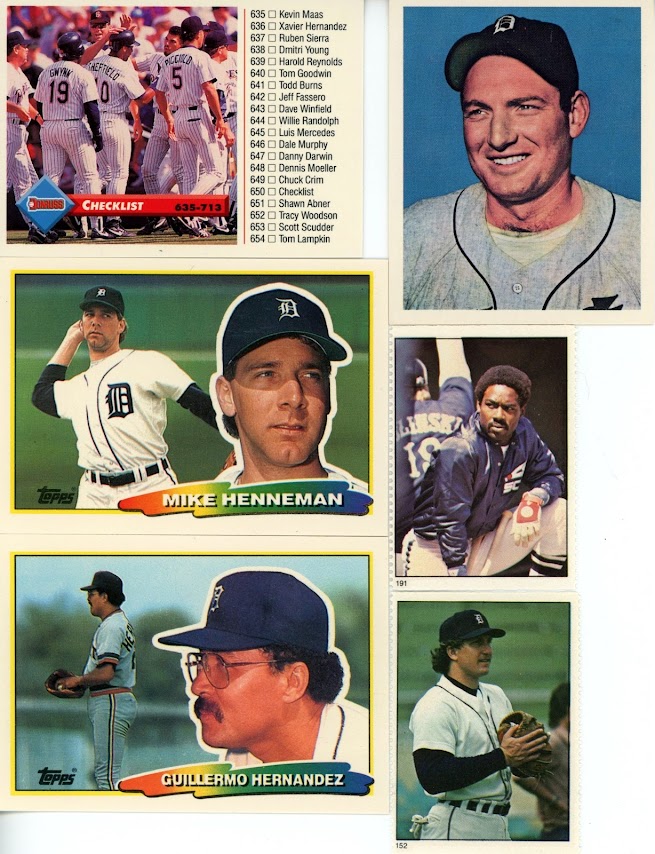 The horizontal/odd-sized baseball includes a George Kell ('82 G.S. Gallery All-Time Greats) and '82 Fleer Stamps of Lemon and Parrish, adding to the '84 Tigers fun. 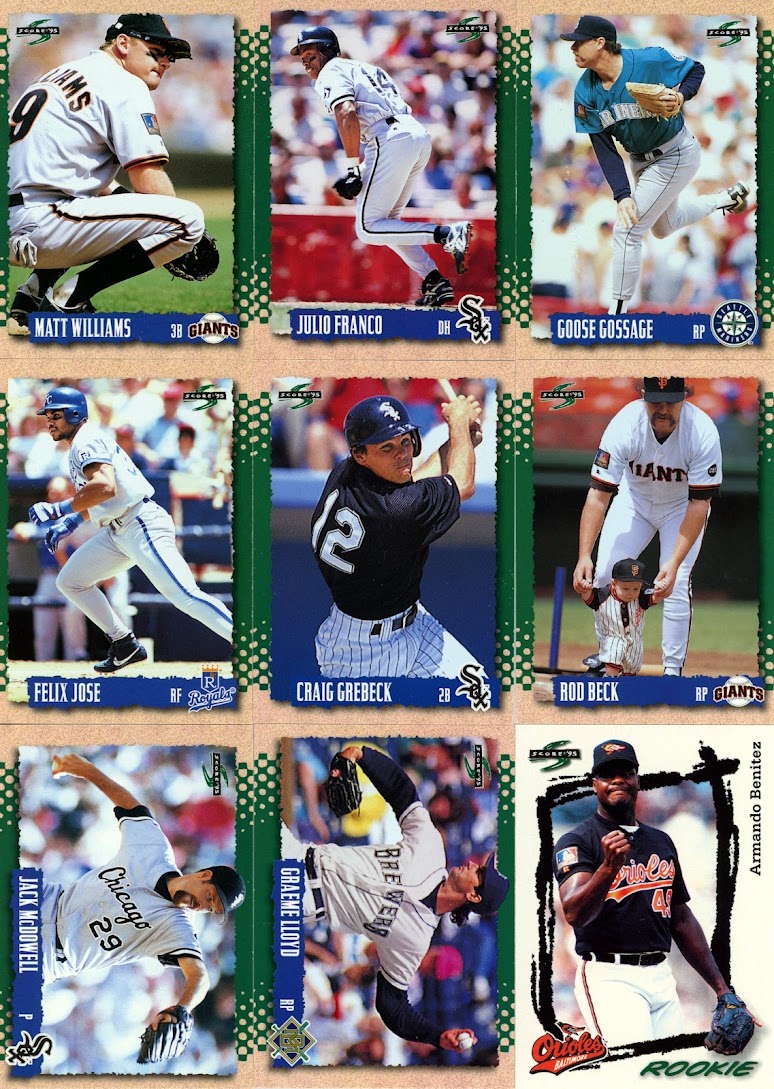 Nine more cards for my '95 Score Series 1 set build (still need three). Anyone remember Goose pitching for the '94 Mariners in his sunset season? 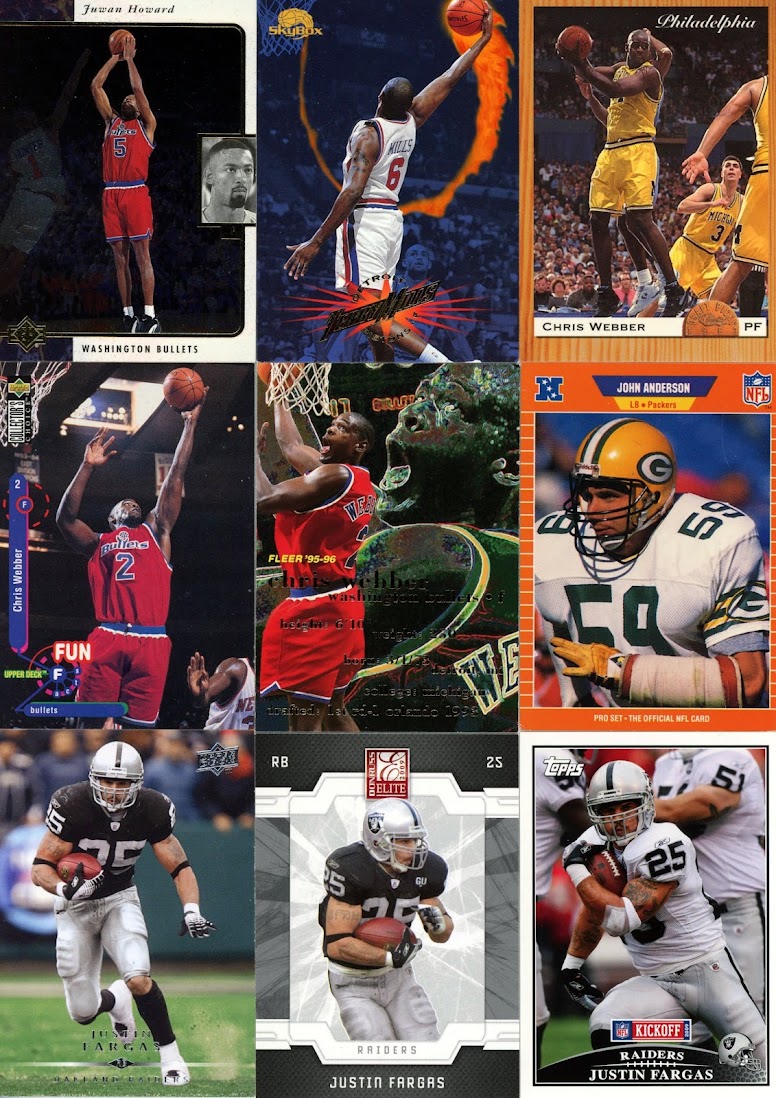 Basketball and the first bit of football. As a reminder, Fargas transferred to USC so I collect any non-Trojans cards of his. 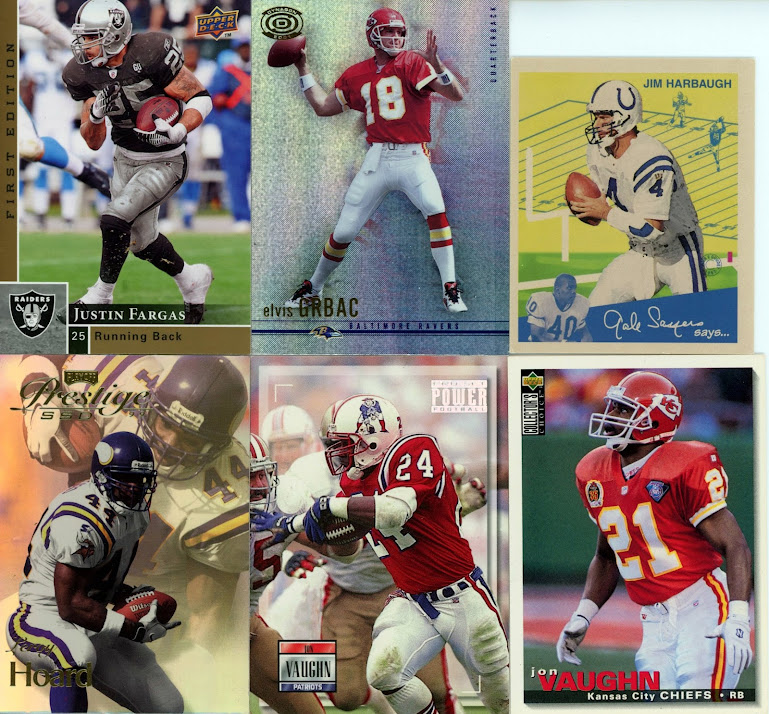 Shiny Grbac! Mini Harbaugh! And a pair of the proudly outspoken Jon Vaughn who's been advocating for fellow victims of serial abuser Dr. Robert Anderson. 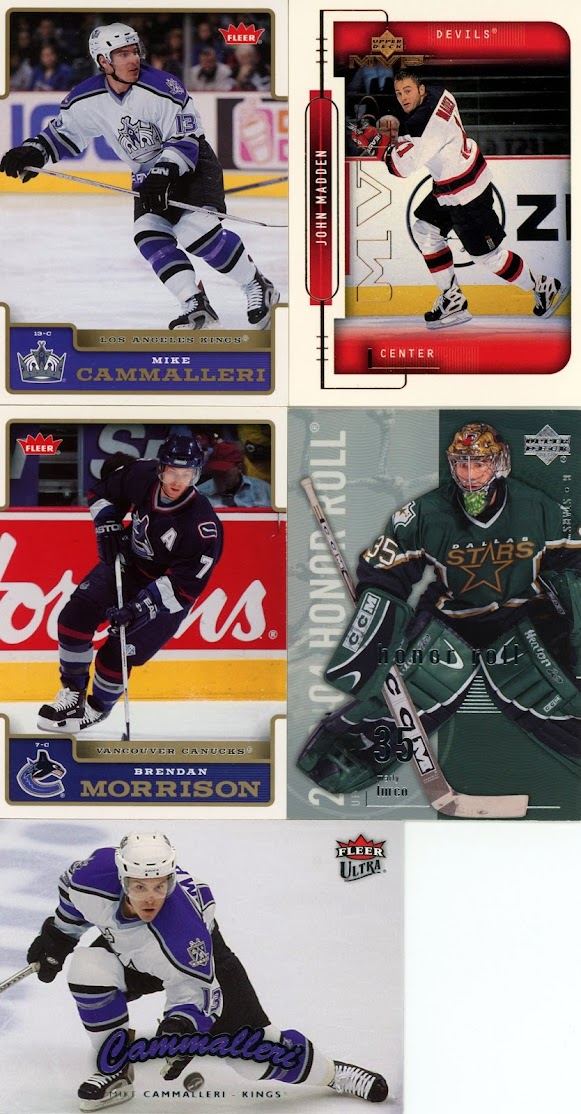 And a bit of hockey too with four players including star F Mike Cammalleri, hockey John Madden (who I still like more than football John Madden), and two of my all-time favorites in Morrison and Turco.
Many thanks to Joshua for a smooth trade and helping out when some Secret Santa participants got cheated, which is obviously not in the spirit of the season. It looks like he's disabled trading to take a break for now but I could certainly see dealing with him again in the future.
Next up is Yankees fan in Iowa jayoneill. I don't do this too often yet but I actually initiated this deal after seeing that Jay could help me quite a bit with my 1995 Finest baseball set build. We managed to put something together around those (and a couple other fun items you'll see below!) in exchange for a mix of Yankees and inserts, largely from the Facebook lot, plus a few inserts and hits he had his eyes on. Here's what I got:

28 cards for the '95 Finest set knocked off a nice chunk of my wants! Also Henneman is a Tigers PC guy so that was nice. I still need almost 50 to finish off this set but considering I started with a partial set from the collection purchase and have acquired the rest in trades I'm pretty happy with how that's gone. 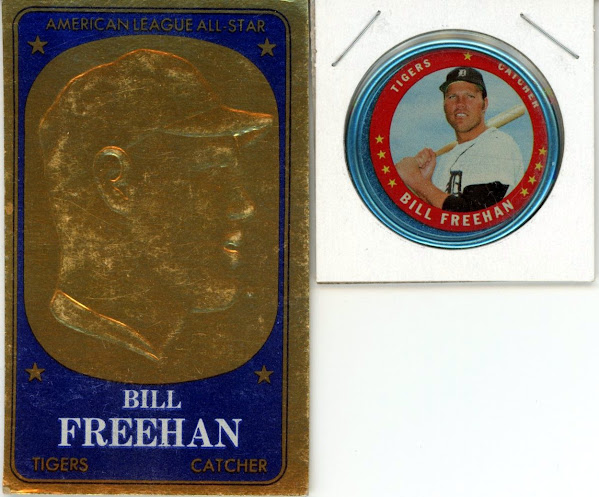 And I was also able to sneak these into the deal! I don't get to add to my Freehan collection that much these days so tacking these onto the deal was a major coup for me. On the left is his appearance from 1965 Topps Embossed, a set I'd seen very often but didn't own an example from until this one. How cool does that look? And joining it is a '71 Topps Coin. This is my first of those as well and it's fun to compare it to the more modern examples like the ones from the 80s/90s to see that the earlier ones are very similar in terms of quality. The design is also a classic. I'm still four items short of the century mark for his collection but I'll get there. 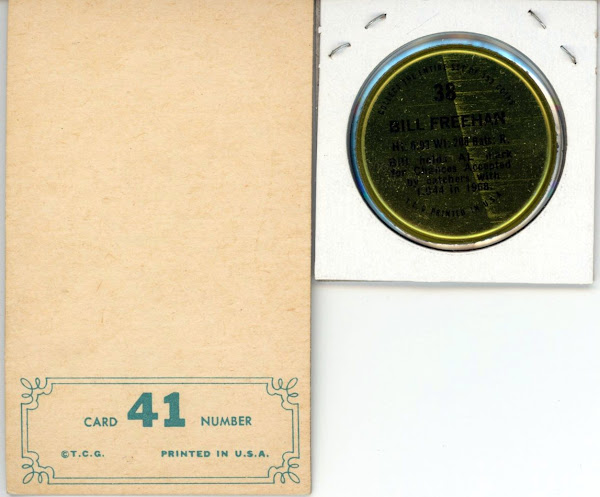 Here's the (apparently poorly scanned) backs in case anyone's interested.
I made sure to thank Jay for working with me to get that many Finest base cards along with two very cool vintage pieces, and it's no surprise his feedback sits at 100% with more than 300 deals done. I'm sure we'll be swapping cards again at some point.
Longtime member (since 2009!) suomibear8 (a.k.a. Aaron) is up next with a stack of cards coming back to me that rivaled that of Joshua's above. This is another one where I reached out first to get the trade going and I'm glad I did because of the 50+ cards I got back, most of them baseball: 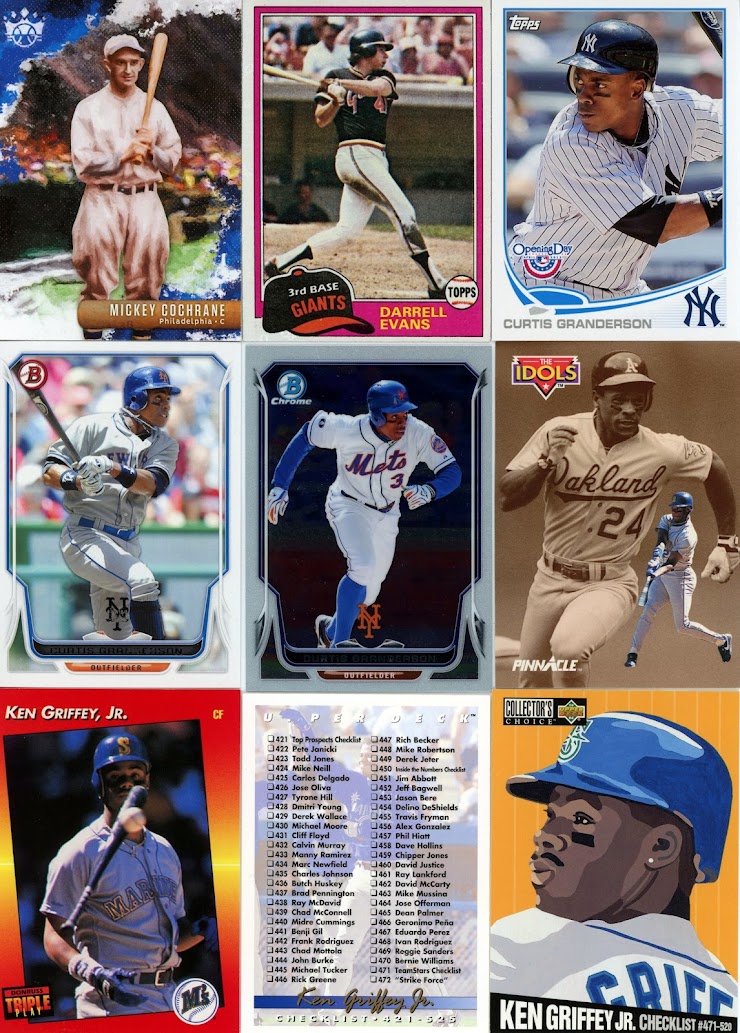 Two Tigers--Cochrane still counts, as I always say, and I'll forever remember Evans with the '84 team (and more)--three many Grandersons, and four Griffeys. The back of that Pinnacle of Junior mentions that Rickey became a hero of his while Henderson was a teammate of Griffey Sr. with the Yankees in the 80s. Pretty cool! 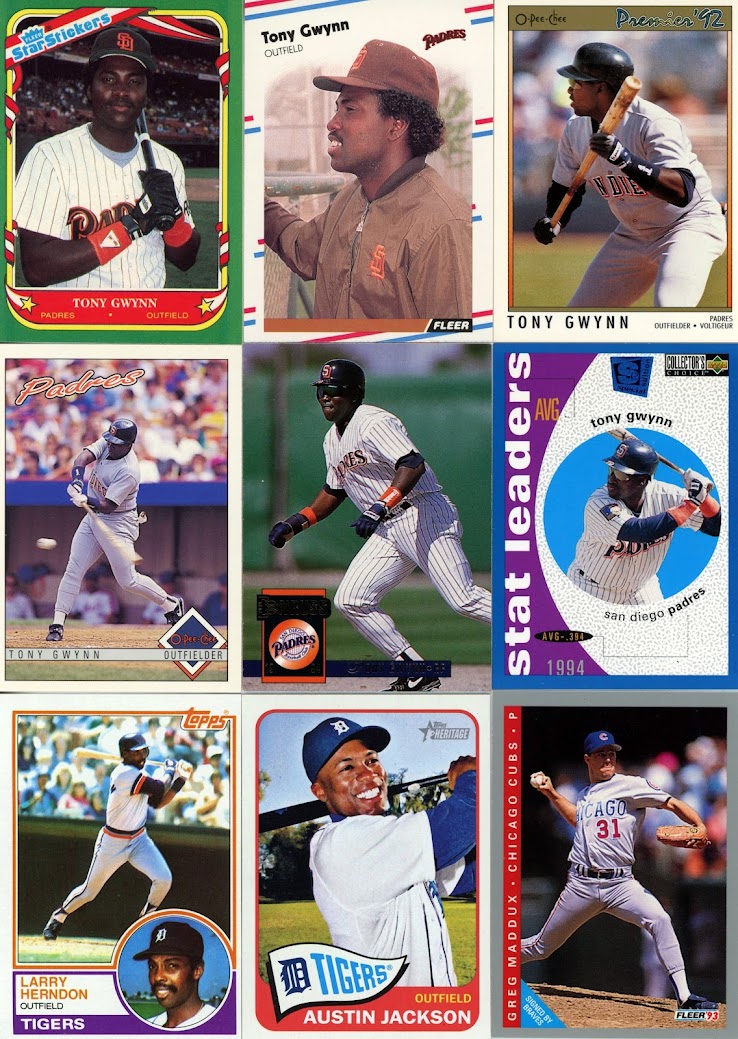 Six is a nice number of new Gwynns. In the 80s and 90s was there a better pure hitter to watch than Mr. Padre? Herndon and Jackson were fun Tigers OFers a few decades apart. Maddux is of course one of my big four PCs along with Griffey/Gwynn/Ripken, and I ended up with a couple more of him in this deal as well. 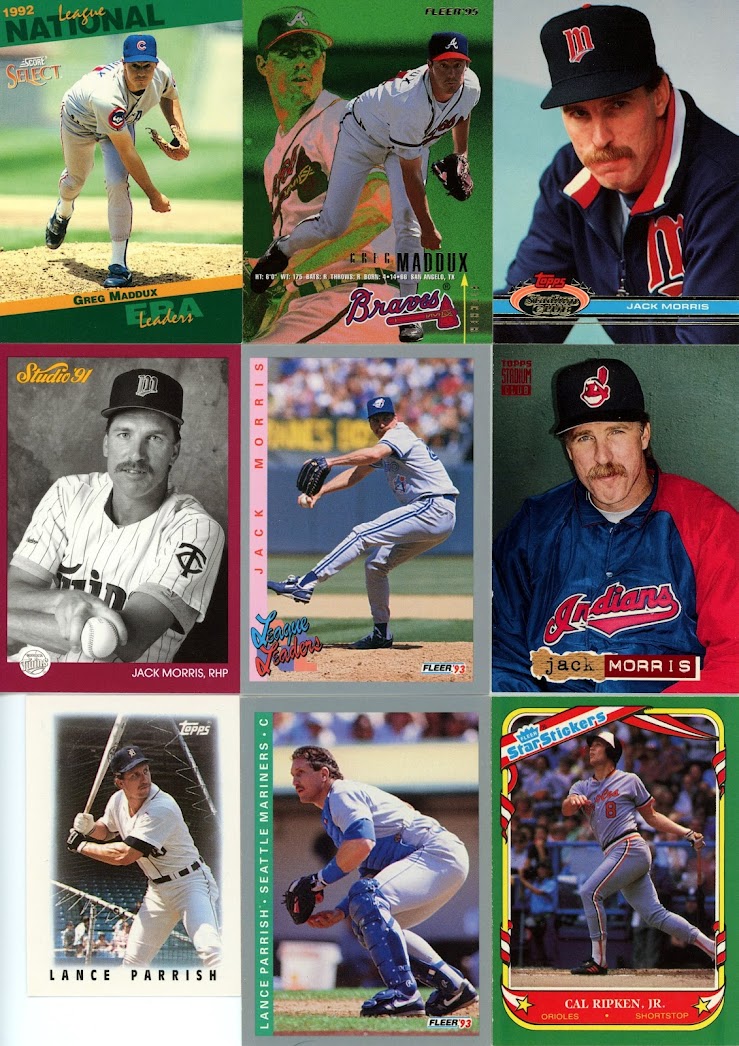 Maddux was one of the top pitchers in the 90s while Morris was in that category the decade prior. He and Parrish made for an impressive All-Star battery. 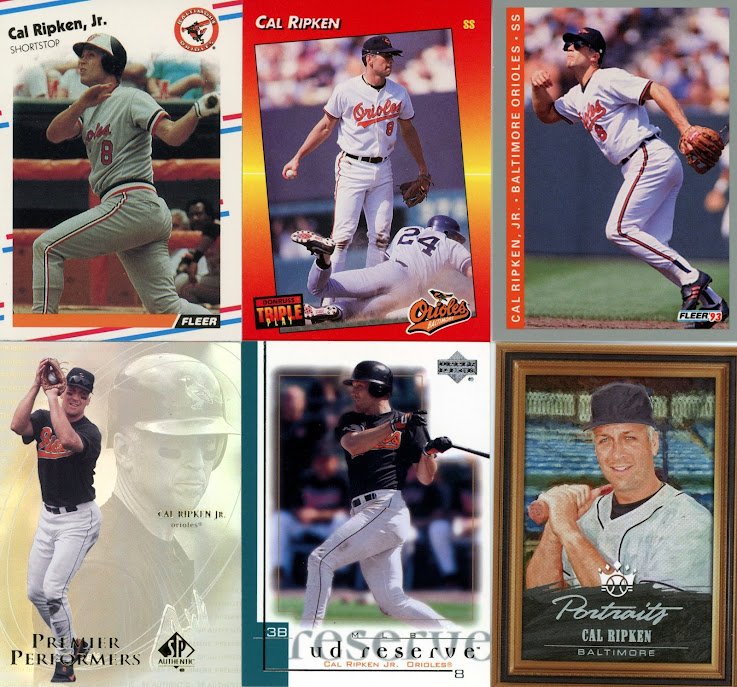 Junk wax, 2000s, or present, I'll take any Ripkens I don't have and that's why he continues to lead the pack with over 1100 cards! 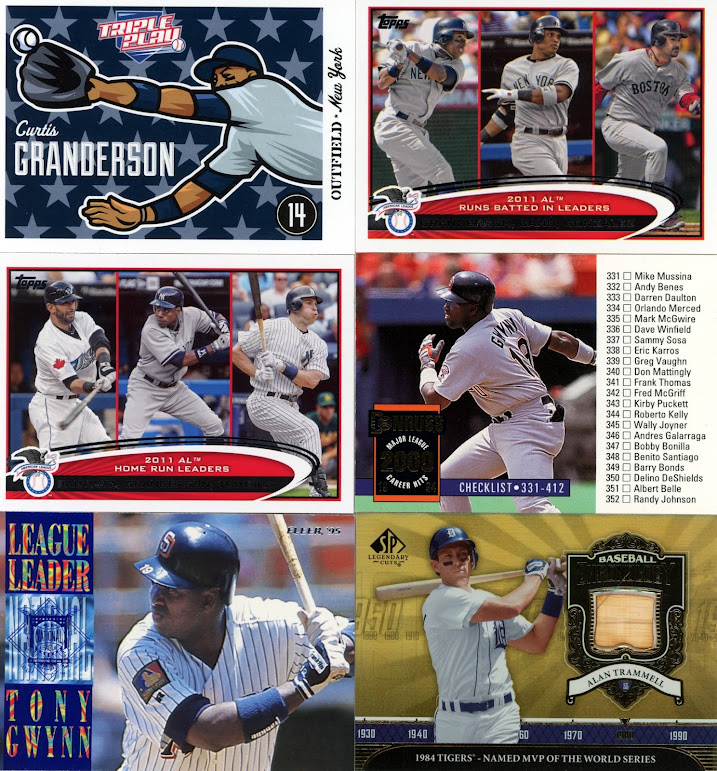 Three more Grandersons remind me that at some point I may go back to this blog's original title, though I'll probably never see his PC eclipse that of JV, for whom I have more than double of Grandy's 225+ cards! Gwynn's got both of them beat combined with more than 750 including this pair from the mid-90s. And I was excited to snag a new bat relic of '84 World Series MVP Alan Trammell out of 2006 SP Legendary Cuts. I now count 11 hits in his PC, six of which are now relics. Sweet! 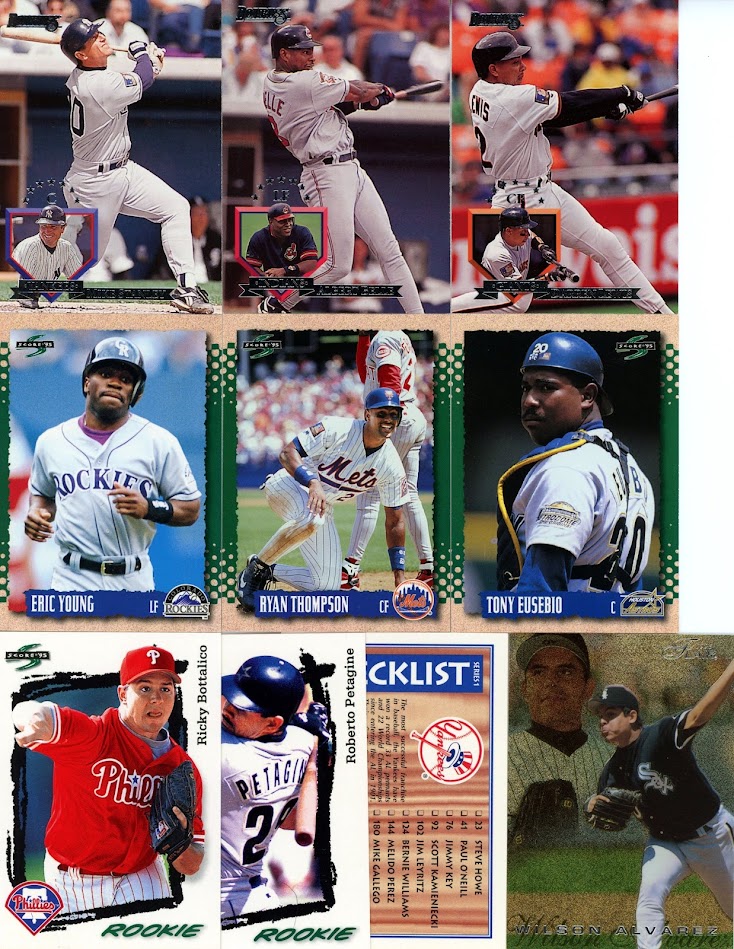 These 10 cards all go towards my 90s baseball set builds from the Facebook collection: 1995 Donruss and Score plus 1996 Flair (silver text, gold background).

The tiny football trio includes cards of Jim Harbaugh (under duress!), TE Tony McGee, and RB Butch Woolfolk (1983 Topps), who had a nice career himself and then saw his son Troy suit up as a DB decades later.
Once again I have nothing but nice things to say about this member and how well our transaction went. Aaron was easy to work with and nice enough to include that Trammell bat, and that's why his feedback is flawless after almost 200 deals.
Last up today is a member named abide who wanted to split up the deal I offered him into two separate trades, which ended up working just fine. For whatever reason the USPS wasn't fine with one of the envelopes he sent my way, and it eventually made it back to him, after which he got it to me in short order. Besides that, everything went smoothly. I sent him some '96 Flair, a few nice Chipper Jones cards, a handful of inserts, and two hits. Besides what you'll see below I was very happy with the return that included cards for Jeff, Matt, Doug, and Paul (and I mean some nice inserts and hits!). Here's what I was able to keep for myself: 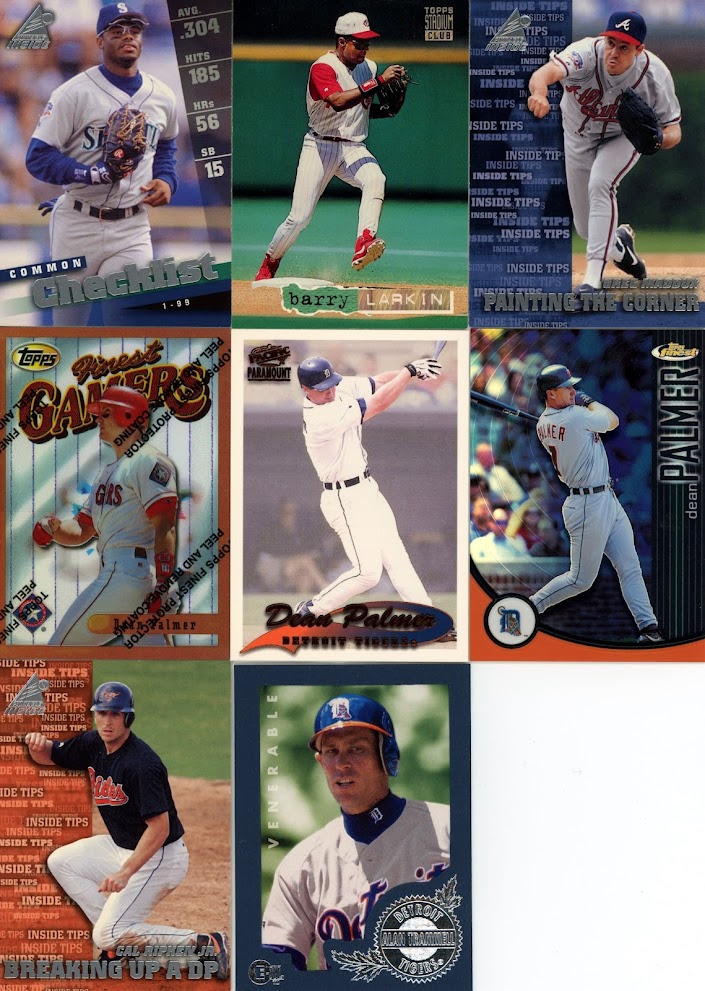 Griffey/Maddux/Ripken hail from Pinnacle inside while Gwynn is in the next scan (different set, though). I can always use more Larkins. Three nice Palmers include a pair of Finest Refractors, with the 2001 version numbered /499. Tram looks great on the 1996 E-Motion XL design. 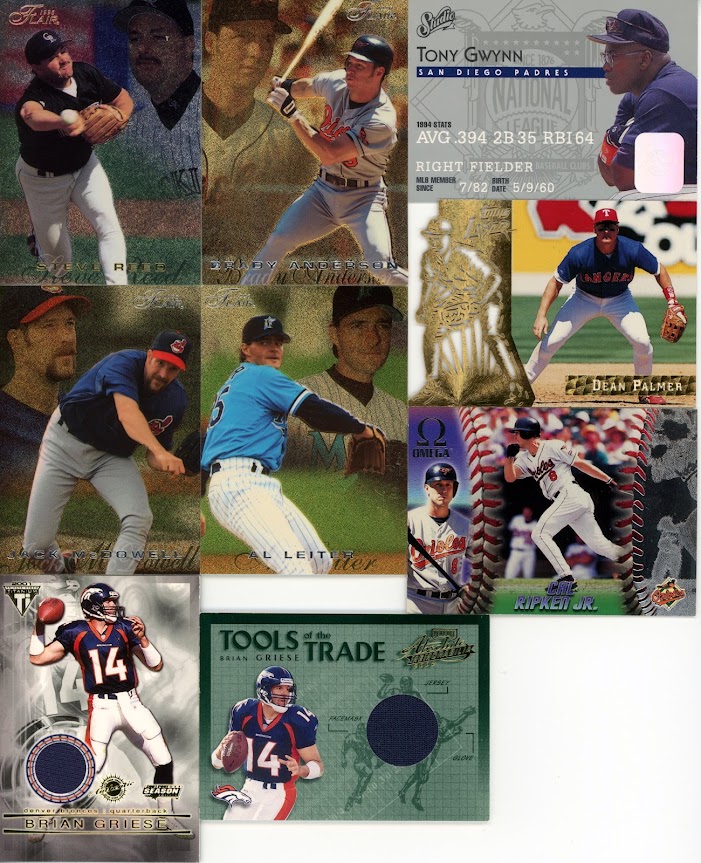 Besides a quartet of '96 Flair for my own set, Gwynn makes his first appearance while Dean-O and Cal get their second. Hell yea, 1996 Topps Laser! And I scored two hits of my own of '97 National Champ QB Brian Griese, jerseys from 2001 Titanium Postseason and 2002 Absolute Memorabilia (#d /150). Did anyone do memorabilia cards better than Donruss/Leaf/Playoff back then? The answer is clearly "no." Griese moves up to 28 hits in my football collection.
USPS issues aside this trade went very well with both of us happy with the deal after some countering, which I'm always willing to do. Maybe we'll be able to figure out another trade, especially if I can add more trade bait.
That's four more trades worth of cards that I can put away, and we'll see how many I get to next time!
Posted by Dennis at 6:29 PM