It's February 14 and that means one thing around here: celebrating the birthday of buddy of the blog Doug over at Sports Cards From the Dollar Store!  I think it's awesome that he collects cards of athletes, celebrities, and more, with whom he shares a birthday, and today's post is a good example of that fun, listing his top 10 2/14 cards from the last year.  I'm happy to announce that he has a few more things from me that he'll be able to show off whenever he feels like it.

Speaking of "whenever he feels like it," unforeseen circumstances delayed me from getting his latest package to me (delivered weeks ago!) scanned and ready so eventually I figured, why not show it off on his big day?  And "big" is appropriate when discussing this latest mailing, one that arrived in what I believe was a 600-ct box, meaning he shelled out good money to get it to me.  Such is the generosity of my Canadian neighbour.  And as I flipped through the cards, I felt that generosity even more! 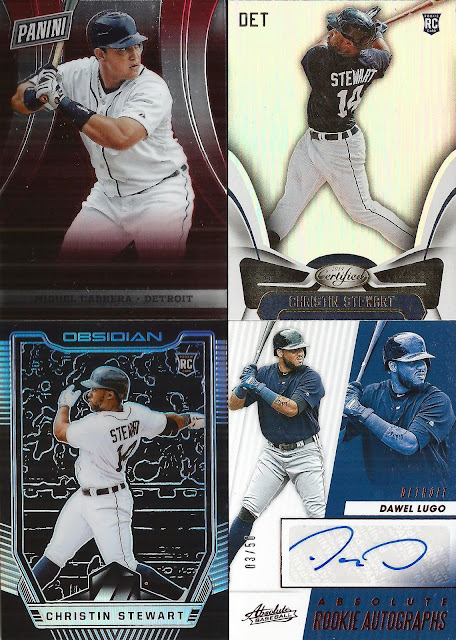 That Miggy is from a 2014 set that was available (probably in packs?) at that year's National, and it's cool because I hadn't seen it before.  The other three hail from one of Doug's favorites: Panini's Chronicles.  I love the mix of brands/designs it offers, and those are on full display here with a pair of Christin Stewarts and my first auto of young IF Dawel Lugo.  Nice! 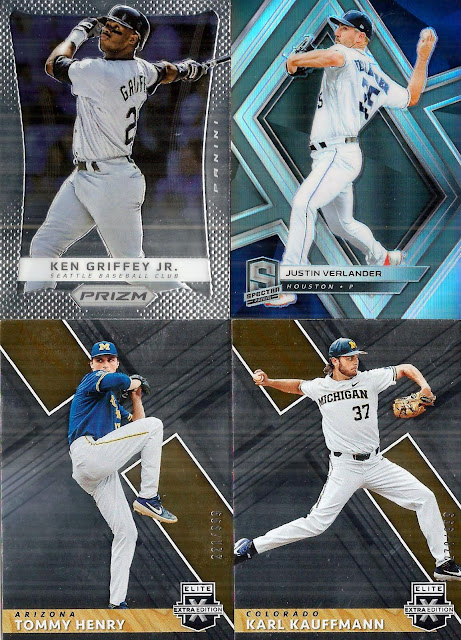 The baseball continues here with even more Panini goodness.  Griffey hails from 2012 Prizm, and that sweet shot of his sweet swing is new to me.  The not-so-outspoken-anymore Verlander also cameos with another example of a 2019 Chronicles design, this one from the super thick Spectra.  And then there's two of my favorites in the whole box:  2019 Elite Extras of former Michigan pitchers Tommy Henry and Karl Kauffmann, two guys that were key to the Wolverines' College World Series run last year.  I love that they're both college uni cards plus I was thrilled to get my first of Henry, hopefully card #1 of many. 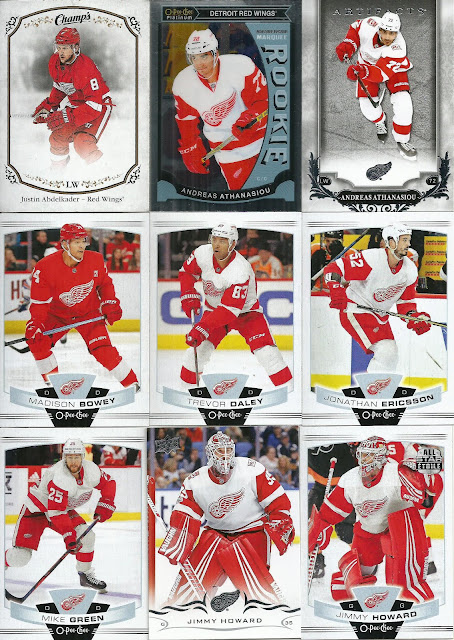 When it comes to packages from Doug, hockey is always well represented, and this time I was treated not just to cards of my alma mater, but the local pro club as well.  The Wings may be terrible this year but they were fun to watch in the 90s and 2000s when they were like the Braves except they won more than one title.  You'll see O-Pee-Chee's 2019-20 base set quite a bit today, one I think looks quite nice, as is typical for the brand. 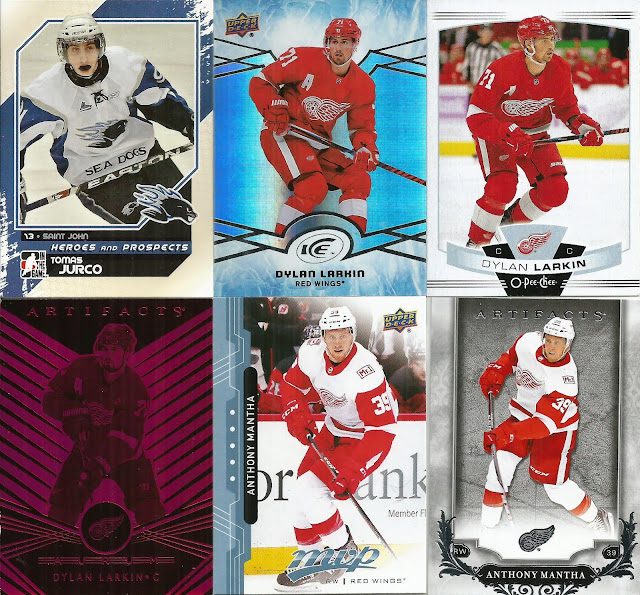 Wings content #2 of 3.  The star of the show here is PC guy Dylan Larkin, whom I scanned with both teams just because.  I was happy to need all three because I love growing his collection, and all the cards look nice, too, including the Artifacts red insert called Aurum, which is a bit short on gold, but that's fine for this Red Wings fan! 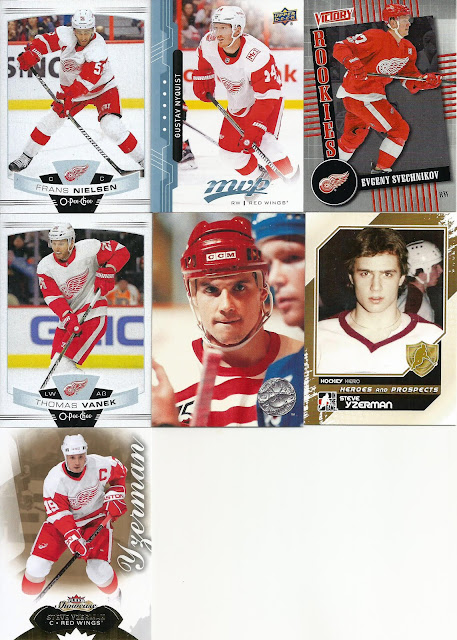 The last of the Wings stuff comes with a couple more 19-20 OPCs, but of course I'm more interested in cards starring The Captain--and now The GM--Steve Yzerman.  The mix of old and new photos, designs, and uniforms, makes those a fun trio! 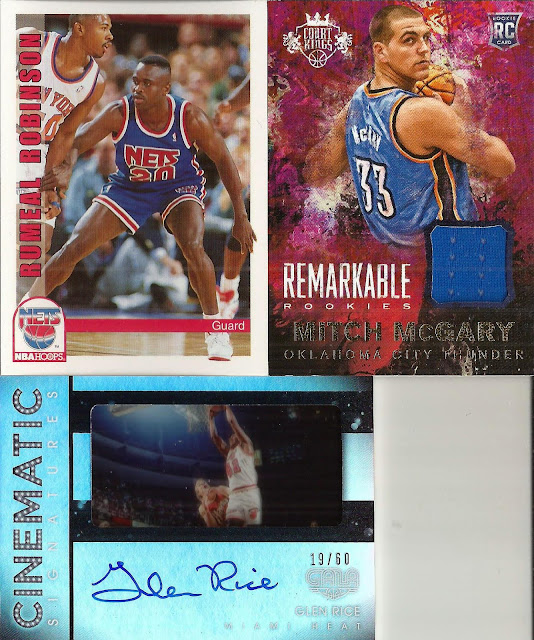 On the Michigan side of things, the basketball team has had its highs and lows this year but have been pretty interesting under new coach Juwan Howard.  Representing that team, Doug hit me up with a new base of Rumeal Robinson, a jersey of weed entrepreneur (go figure!) Mitch McGary, and a ridiculously beautiful slide/auto of Robinson's '89 NCAA title teammate Glen Rice.  I believe the Rice is my second such auto from that set and, yes, it looks even better in person! 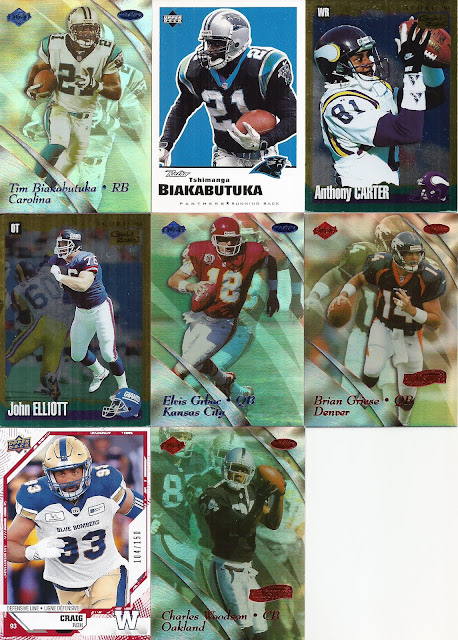 A very nicely balanced package continues with some excellent football content.  '99 Collector's Edge Masters makes four appearances throughout this scan with base cards (/5000) of PC guy Tim Biakabutuka and former QB Elvis Grbac, plus HoloSilver (with red stamps?) parallels (/3500) of '98 champs Griese and Woodson.  Touchdown Tim is also represented on a super cool '99 UD Retro base, also new to me.  I also loved the nostalgia for 90s inserts with '94 Score Gold Zone parallels of AC and OT John "Jumbo" Elliott.  And then we have my first card of another newbie to my collection, former LB/DL hybrid Craig "Death" Roh, a pretty good recruit who played in Ann Arbor during one of the team's worst eras, 2009-12.  While NFL success eluded him he's since done well for himself in the CFL, and made his way onto this Red parallel from UD's product for that league last year. 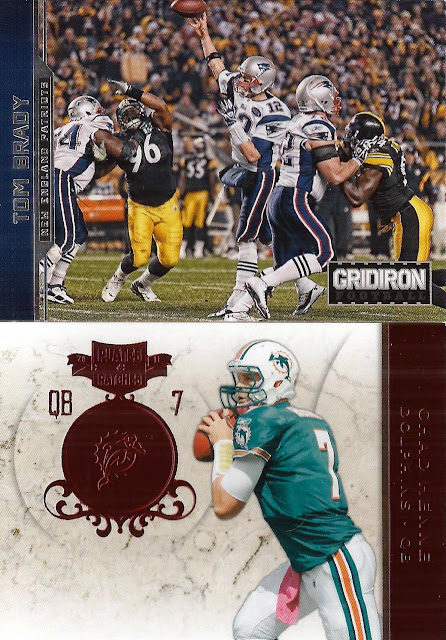 These two guys have been associated a bit more with winning, though, in college and/or the pros.  (Future former?) Patriot great Tom Brady features on a very cool horizontal Panini Gridiron base while blog favorite PC guy Chad Henne gets in on the fun with a card I surprisingly didn't have: his 2011 Plates & Patches base (/299).  I recently hit the 300 mark for the latter and can't wait to boost his collection even more this year as I make him my top football PC. 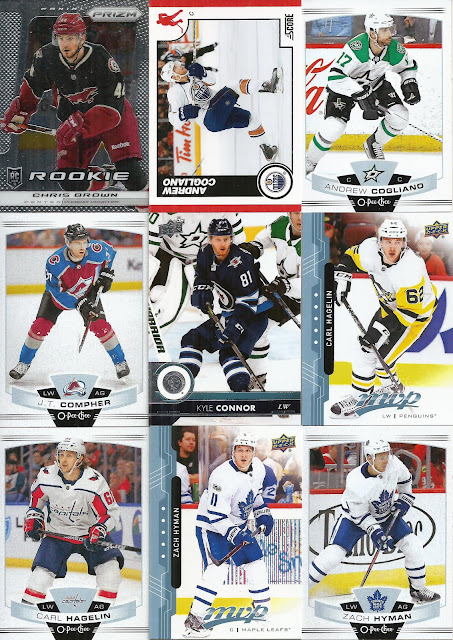 And now we get into the bulk of the package:  Michigan Hockey content!  19-20 OPC makes a solid seven more appearances over the next three scans, proving the Ann Arbor-to-NHL pipeline is as strong as ever.  There's also a couple example of the prior season's factory set blue version of UD's MVP which were also new to me, as was practically everything you'll see in these scans.

There's WolverWing Dylan Larkin again, and I promise my scan of the Aurum insert looks much better than the one used here, getting much closer to the actual red color.  Joining him is a fun AHL card of winger Brad Jones, PC guy Brendan Morrison, and a new 90-91 OPC offering of D-man Jeff Norton. 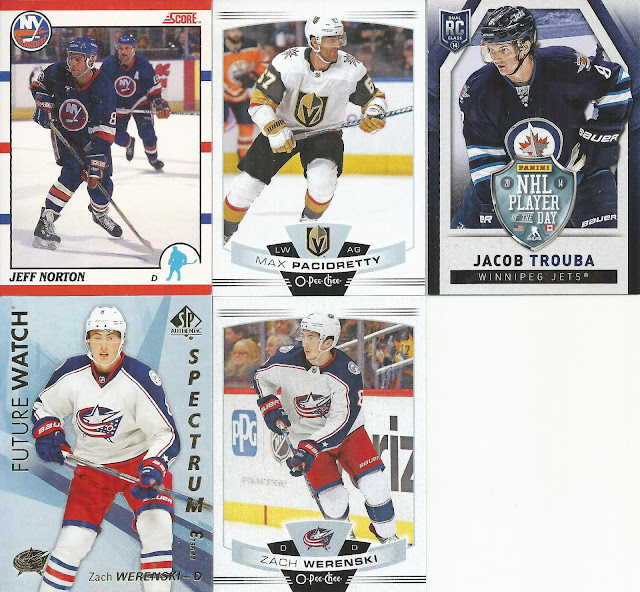 Before we get to the real fireworks of the box here's the last of the "regular" hockey stuff.  That includes another Norton, two more OPCs, and a card each of D-men Jacob Trouba and Zach Werenski that allowed me to provide scans to TCDB.  I'm noting that because very few cards in the box were missing images there, often thanks to Doug, which was very cool. 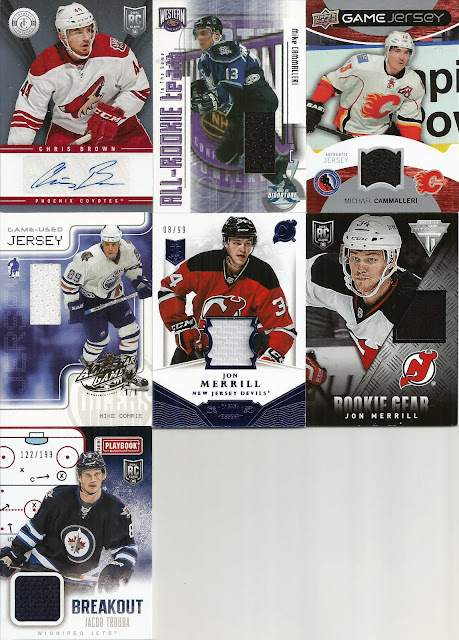 And now the part you've probably been expecting considering the source!  Up first is another autograph of the pride of Flower Mound, Texas, Chris Brown, and as usual I'll mention that Doug is almost 100% responsible for my collection of that player.  Next is a couple jersey relics of hockey Mike #1, Cammalleri, from 02-03 Be-a-Player, plus a 2012-13 UD Game Jersey set that was given away at the NHL Hall of Fame back in 2013.  I hadn't seen those before so learning about them was cool, plus I got the set added to the TCDB.

The other hockey Mike is Comrie, and his card happens to be more than just a normal BAP relic (from 03-04) as it got a 1/1 stamp at the 2004 All-Star game.  These aren't your standard 1/1s but I still like to label them that way, and anyway they sometimes make plain cards more interesting.  That'll become my first 1/1 of Comrie.

Another guy with twice the hits today is D-man Jon Merrill, a guy who's been with Vegas for the last three years but was drafted by the Devils, the team pictured above.  The designs of those relic cards are different but the Dominion and Titanium cards came out of Panini's Rookie Anthology, kind of an ancestor of Chronicles.  Doug's also been a major factor in my Merrill collection.

Last up in this scan is yet another defenseman, Jacob Trouba, who finally saw his tenure with the Jets end thanks to a trade to the Rangers, with whom he could possibly tie or best his career-high of 10 goals.  This relic with a fun design should represent hit #10, making him one of a select group of guys in the collection to hit that mark.

Two of the guys on these horizontal cards are also in the 10+ club.  One is Cogliano, whose Upper Deck Ice card is twice as nice thanks to dual swatches!  The other is possibly my favorite card in the whole package is a new Shawn Hunwick--something I haven't been able to say in a while--that includes an autograph plus an enormous Blue Jackets patch, plus, you know, his Wolverines helmet.  Hunwick remains my lone hockey supercollection and it was a nice surprise from Doug that I could finally add to it again.  And last but not least is a cool multi-swatch card of former Michigan star Tyler Motte, a guy that went off for 32 goals and 24 assists in his final year in Ann Arbor, then bounced around from Chicago to Columbus to his current team, Vancouver.  I like when manufacturers make relics more interesting with ideas like swatch windows that spell out something relevant.

Doug, once again, happy birthday and also thanks for all the effort (and money!) you put into this amazing package that was an excellent start to the year.  While I work on getting all of these scans added to my collection and my stats updated I hope you enjoy the little envelope I sent your way to celebrate 2/14, and I'll work on another one as soon as I can.

Everyone please head over to SCFtDS to check out Doug's work and send him some cards of 2/14 babies yourselves.  Then stay tuned for all the other posts I've been promising while I've been slacking this year!
Posted by Dennis at 10:45 PM