Matt of Sport Card Collectors must have decided he'd gone long enough without sending me cards because yesterday I received one of his trademark PWEs, and today marks one month since I last showed off a trade package from anyone--another PWE from the very same guy!  This bit sized bunch of cards is perfect for scanning and posting while I take a short break from showing off my Sportlots loot.  Here's what came my way this time: 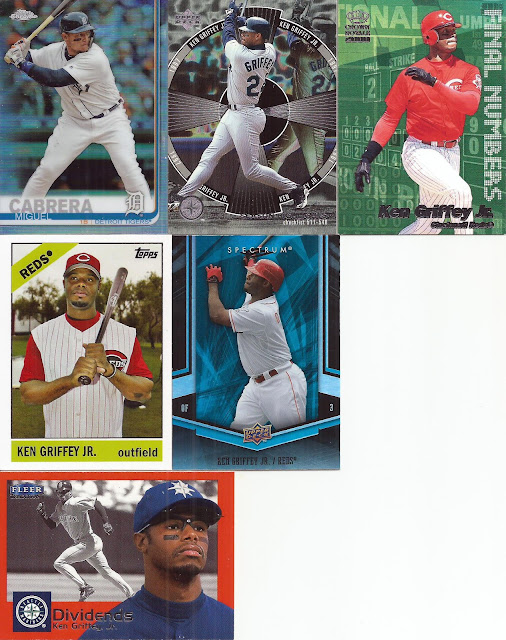 While his Griffey collection cull has been a primary motivator for these monthly (or more frequent!) mailings, Matt's been mixing in other stuff as well.  In this case he made me the proud owner of a shiny new 2019 Topps Chrome Refractor of Miguel Cabrera.  I lost the scanning lottery today so it didn't come out nearly as nice as it looks in-person, but my rule stands:  Refractors always look good.  I saw a story the other day about Cabrera dedicating himself to conditioning this off-season, but I'm skeptical since we heard that last year as well.  Regardless, he's still worth collecting and I'm happy to have another Refractor to add to what amounts to almost 300 cards (294 right now).

And then we have the nice familiar pile of Griffey cards.  In this envelope two were new for me, starting with card #3, a 2000 Crown Royale Final Numbers insert.  This doesn't happen often at this point in my collecting career but I don't recall seeing this one before, so that alone makes it a fun add, besides the fact that it's from a Pacific brand and a Griffey I needed.  The back notes that Junior was joining the Reds having won a total of four AL HR titles, and those were 1994 (40) and 1997-99 (56, 56, and 48, respectively).  From 1993-2000 (with a couple strike-shortened seasons, mind you), he socked 351 dingers in 4187 AB, an elite 11.9 AB/HR ratio that was a tick lower than Babe Ruth's career mark.  His 162-game average was 52!  Dude was good.

The other newbie is the fifth card you see in the bunch, a very shiny and colorful base--if you can believe it--out of Upper Deck's 2008 Spectrum product.  This is another one that doesn't come out as true-to-life in a scan as the surface is very reflective with a rainbow effect throughout.  You wouldn't know it by looking above but the bottom and sides are kind of silver/gray while the area behind Griffey is a green/teal kind of thing.  In contrast to modern products, though this has a number of colored parallels, they're all serial-numbered so there's no confusion.  C'mon, Panini and Topps, learn from the past!

The others include a checklist from '98 UD, 2008 Topps Baseball Card History, and 2000 Fleer Dividends.  I own complete sets of the first and third and picked up the second, done up in the style of '66 Topps, at some unknown point.  Interesting fact about the Upper Deck card:  it's a checklist #540 in that year's flagship set, and two years later card #540 was--you guessed it--a Griffey checklist.

Speaking of numbers, Griffey's near a milestone of his own as he sits at 894 items thanks to today's additions.

Matt, thanks again for another fun PWE with some nice new stuff I needed, plus a good excuse to take a quick break from scanning/posting larger bunches of cards from Sportlots.  I'll be hitting you back at least once more before the end of the year, especially after I get a chance to reload at the December show and COMC!
Posted by Dennis at 8:59 PM