Thanks to some lucky timing, today's post is even a bit more relevant.  As I mentioned in yesterday's trade recap covering the cards (and book!) Paul from Scribbled Ink gave me a couple Saturdays ago, we met up at that day's Tigers game since he had a ticket with my name on it.

Make sure to check out his post from this afternoon where he gives another quick recap of our rain delay experiences (and shows off the stuff I brought him, as well as some eBay and TCDB envelopes!).  That includes a quick look at the Topps '84 Tigers team set I nabbed for each of us using a gift card I got for Christmas last year.  Paul mentioned how difficult these were to find--he struck out at a previous game and we had to check multiple fan shops in the park multiple times before we lucked out and he spotted the last two we could find in the whole stadium. 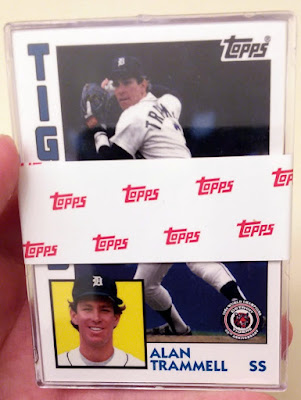 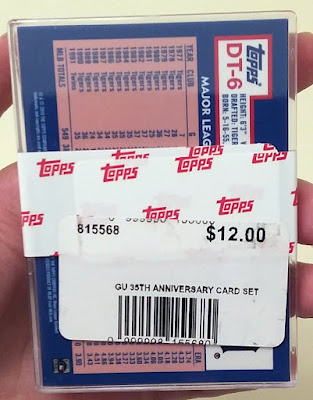 This is a 10-card set starring members of that amazing '84 title-winning team, though unfortunately it lacks obvious choices like Lou Whitaker and Sparky Anderson (licensing issue or just Topps being Topps?).  That was enough for Paul to leave his sealed for now, but I was happy to bust mine open to post them here and add a checklist and scans on TCDB. 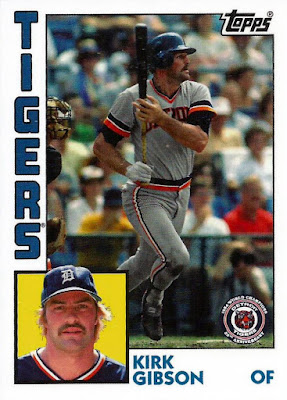 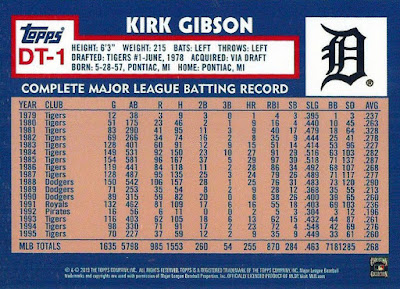 The sets are $12 apiece at the park (if you can find them) or $13 if you go to the team's shop on detroittigers.com, and they're sold in taped plastic cases. 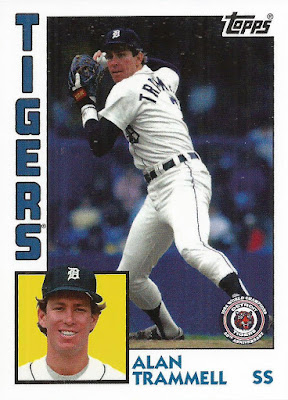 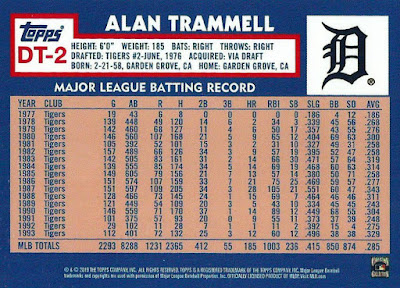 They're based on Topps' 1984 design, naturally, but appear to have different photos, which is nice. 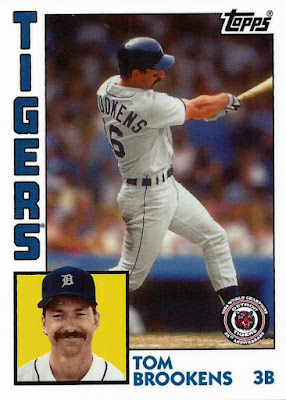 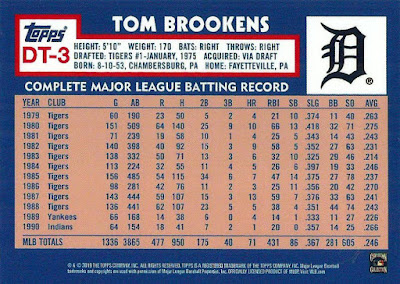 These are also super, super glossy, which is kind of a nice touch--though at this price it's the least they can do! 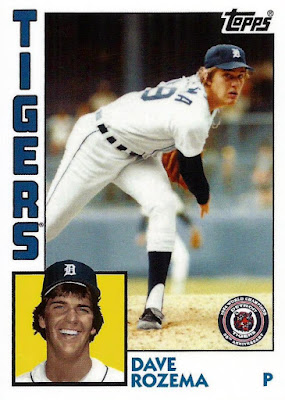 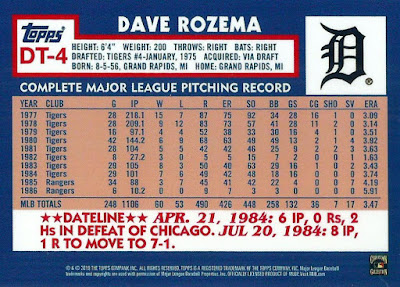 As for the backs, they fit as many years of each player's stats as they can, a bit tricky since a few enjoyed long careers.  The only guy that gets the original set's "Dateline" blurb is P Dave Rozema, whose career was short enough to allow plenty of room (so, again, why is he included?). 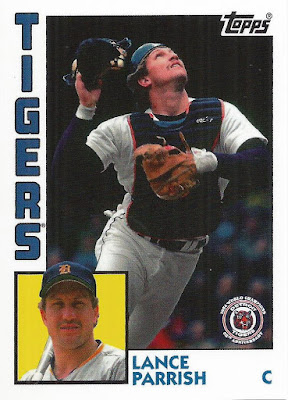 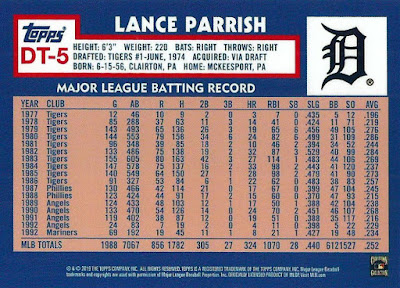 Questionable checklist aside, most of the players here are guys I love to collect, especially Gibby and Tram, not to mention C Lance Parrish, OF Larry Herndon, SP Jack Morris, and '84 AL Cy/MVP Willie Hernandez. 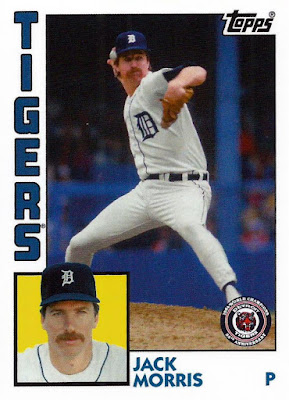 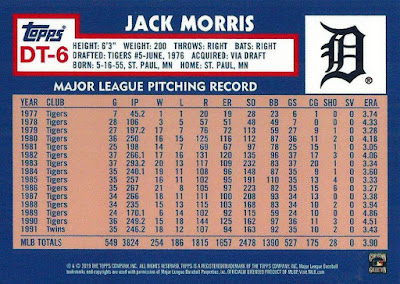 Tram and Morris are recent HOFers that had their numbers retired by the team so their inclusion here makes all kinds of sense. 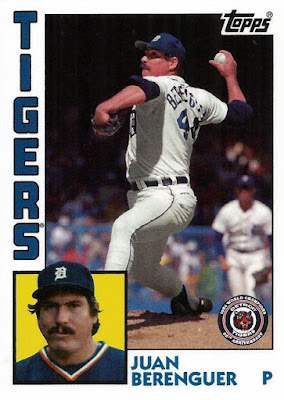 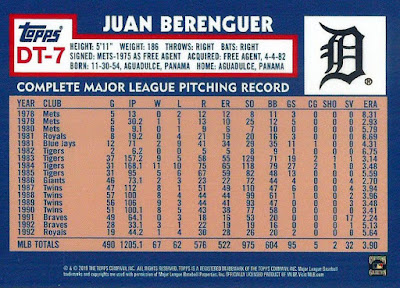 Berenguer was a decent piece of the rotation that year but it still escapes me how you could omit Trammell's double play partner Whitaker, or the first manager to win the Series in both leagues. 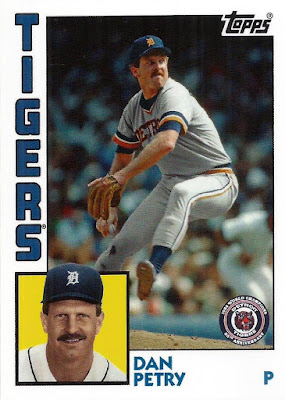 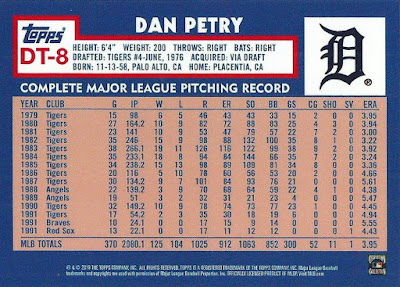 Given Topps' love of all things reprints I'm glad these are numbered "DT-#" so they're easy to tell apart. 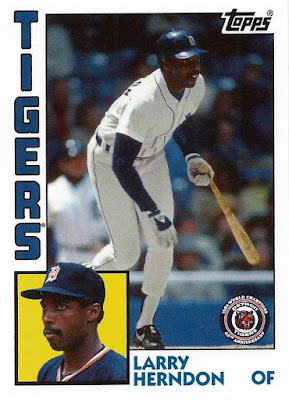 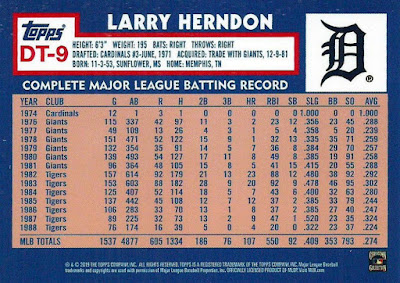 CF Chet Lemon is also an annoying omission, but I can't argue with his outfield partner Larry Herndon making the cut--he had a good Series at the plate and caught the final out in game 5. 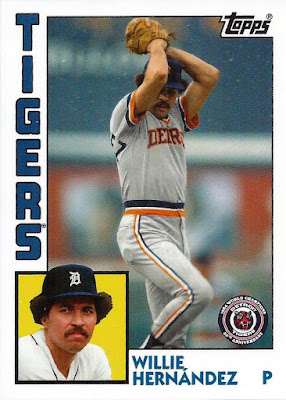 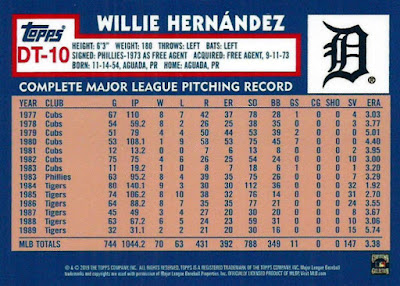 While $12 per set sounds a bit steep--I thought so too--I figured these would be difficult to find online at least for a while, plus I had a gift card, so I wasn't spending my own money.  Plus, it's hard to go wrong with anything celebrating Detroit's most recent Series win.

Next time you can look forward to a hot-out-of-the-mailbox trade package from Seward's Folly!
Posted by Dennis at 7:15 PM