You know, I was all set to post this trade package today anyway, but it just so happens that it's now even more appropriate given events that transpired late last night.

Kin of I Feel Like a Collector Again had sent me some Tigers back in May, and he followed those up with a nice little PWE in July, which I'm very efficiently posting today...in September.  Hey, I don't pretend not to be lazy!

Anyway, it's relevant that this one-card trade headed from Texas to Michigan.  And if you can't tell who it is by now, how's life under that rock where you've been hiding? 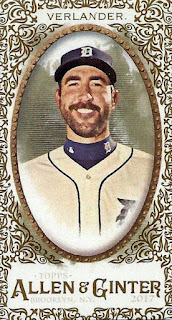 That's right, brand new Astro and still namesake of this here blog--I don't have any plans to change the name again--Justin Verlander made the reverse journey a couple months ago in the form of this Gold Border Mini from this year's A&G product.  Some times a little Verlander goes a long way--and hopefully that's the case for Houston in this year's playoffs!

Because I'm sure many of you will ask:  yes, I'm bummed to see my favorite Tiger of this generation, a guy that was with the team for 12.8 seasons, head off to greener pastures.  Along the way we enjoyed highlights such as

I'm certainly not the first blogger to see my favorite guy (and in some cases, blog namesake!) leave my favorite team, and like many of those others I won't stop collecting him or rooting for him (it's not like he went to the Yankees).  With the Tigers heading towards full-blown rebuild mode, I'm glad he'll head to a better chance at postseason success.  Plus, the haul the Tigers got for him is pretty interesting!

So thanks again for sending another Verlander my way, Kin--it's kind of a bittersweet day, but it's never a bad one when I can find JV in my mailbox.  It's not like I'll ever feel like I have too many!
Posted by Dennis at 8:53 PM