Today's post is a quick recap of yet another purchase from my favorite eBay seller, markaguirre22. Among his auctions he tends to list stuff that must have been part of a pretty nice Michigan PC, and those usually start at $1. Also he offers free shipping on everything, which is super rare these days. 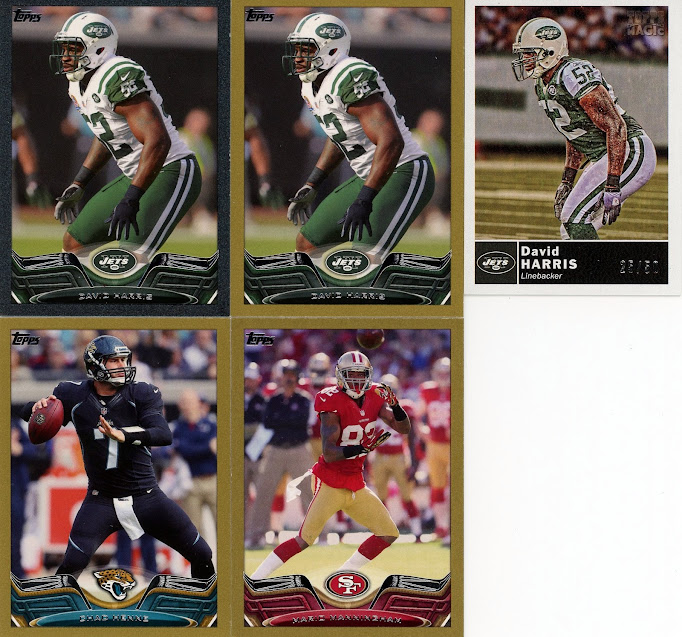 This time I kept an eye on four numbered cards that I secured for $1 each plus tax, though my total was less than $4 thanks to eBay bucks. Once again I was quite happy with my haul, which he even shipped in a bubble mailer despite shipping being gratis:

The first four cards you see here are the ones I bought, plus, as has happened before, the seller threw in a nice extra he knew I'd like. The third mini you see of tackling machine David Harris was a bit smaller than the rest so I set it aside, and it happens to be the oldest as it's from 2010 Topps Magic. That product included three small parallels: Mini, Mini Black, and the numbered Mini Pigskin 50, which is what you see above.
The rest of the cards hail from Topps' 2013 Mini product where all of the cards, including base, were printed with smaller dimensions. Harris joins blog favorite PC guy Chad Henne and former blog namesake Mario Manningham (the throw-in card!) out of the Gold parallel, where the cards were numbered /58.
Speaking of Henne and Super Mario, yesterday was the 15th anniversary of one of the best moments in the history of the Big House:

That clip still gets me every time I watch it. Anyway, all those at $1 apiece (plus the free Manningham) were already a nice deal, but then we get to the card I was surprised didn't get a second bid: Harris's Black parallel. While cards numbered /58 don't feel extremely rare these days, ones that had only five copies made certainly do! As the legendary clip says,

That was easily less than $4 well spent. I now count 92 cards of Harris, 308 of Henne, and 221 of Manningham in their respective PCs. 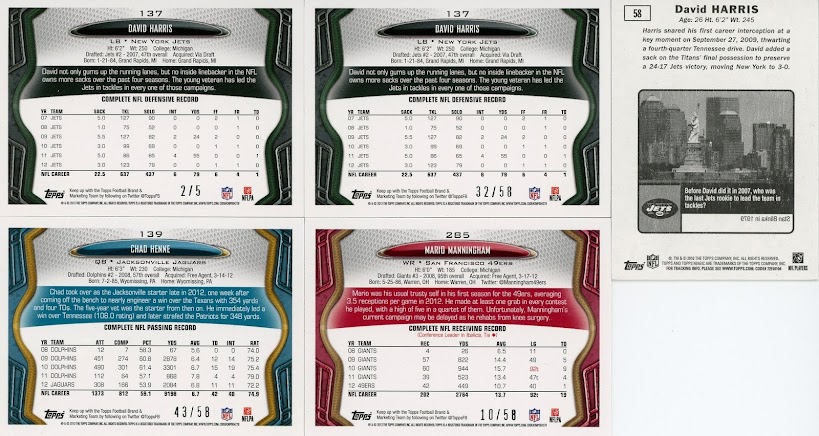 And of course he's the backs for the sake of completeness.
This was another purchase post but coming up next I should have a brand new trade package to show off.
Posted by Dennis at 4:44 PM