The subject of today's series finale needs no introduction, but here's one anyway:

A Baltimore native who'll be turning 85 in just a few weeks, he's spent his entire career in Detroit.  This OF won the AL batting crown in just his second full season and piled up 3007 hits over 22 years.  One of just four Tigers to smash 300+ homers with the franchise, he owns the team lead with 399.  He went to 18 All-Star games, won 10 Gold Gloves, and was worth 92.8 bWAR, with a JAWS score that places him 7th among RFs.  In the seven-game 1968 World Series triumph over St. Louis he hit .379 with 2 HR and 8 RBI.  And finally, he took his rightful place in Cooperstown in 1980.

So who else could it be but Mr. Tiger, Al Kaline?  Al's one of the most recognizable Tigers and has appeared on a ton of cardboard in his lifetime, which gives collectors like me lots of options.  This purchase took one of my rich Tigers PCs and made it richer in a big way. 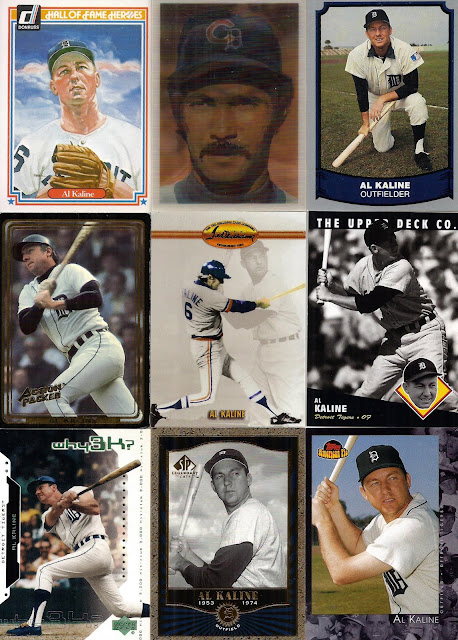 '83 Donruss HOF Heroes is as old as it gets today, but there's nothing wrong with a card made the year I was born, highlighting a guy who'd just joined the Hall three years earlier.  '86 Sportflics Decades Greats is back one last time here with the "Best '60s Outfielders" including Kaline, Tony Oliva, and Billy Williams--nice choices!  Four more sets also return:  '88 Pacific Legends, '92 Action Packed ASG, '93 Ted Williams, and '94 UD All-Time Heroes.  The 3000 Hit Club member is a natural choice for 2000 UD Hitter's Club's Why3K? subset.  And we get a couple great looks at Al's stance in 2001's SP Legendary Cuts and Topps American Pie. 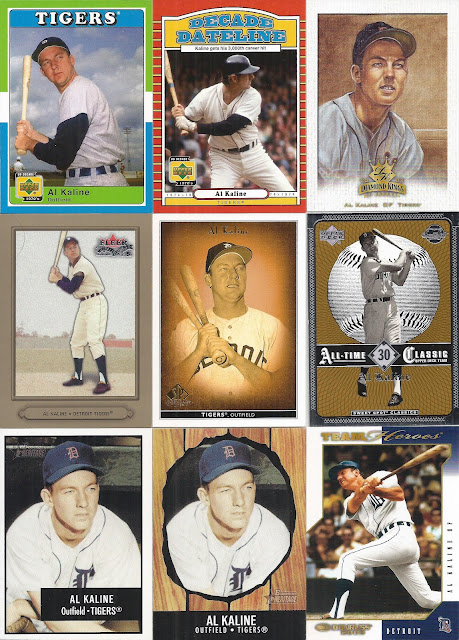 Speaking of 2001, how about a pair from Upper Deck Decade 70s, a design that I consider superior to American Pie (though Retro is probably my favorite of the three).  2002 brings a flawless Diamond Kings design, plus Fleer Fall Classics, SP Legendary Cuts, and one of my favorite Sweet Spot Classics looks.  Then we get to 2003 with two of three variants of Al's Bowman Heritage card you'll see today.  The base is on the left while the other is the "knothole" version.  Also from that year is Donruss' Team Heroes, a product that was kind of fun but somewhat forgettable in its three-year run. 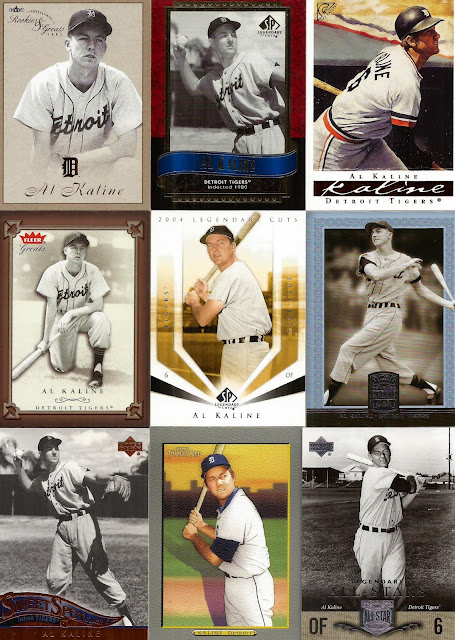 All right, who here likes black & white photography?  There's plenty of it here in the form of some sweet vintage shots of a young Kaline on some classic designs.  We continue 2003 with Fleer's Rookies & Greats, a nice enough looking set that probably wasn't necessary given the plethora of choices at the time; SP Legendary Cuts in one of its best versions; and the gorgeous Topps Gallery HOF, which is a variation that includes stripes on his jersey.  2004's contributions include a stellar Greats of the Game design (with a classic pose) and a solid offering from SP Legendary Cuts.  After those, 2005 gets into a few more products that look nice but were a little excessive:  while Sweet Spot Classics was usually worthwhile, Donruss Greats, Topps Turkey Red (as a standalone product, not the insert), and Upper Deck's All-Star Classics were a bit much. 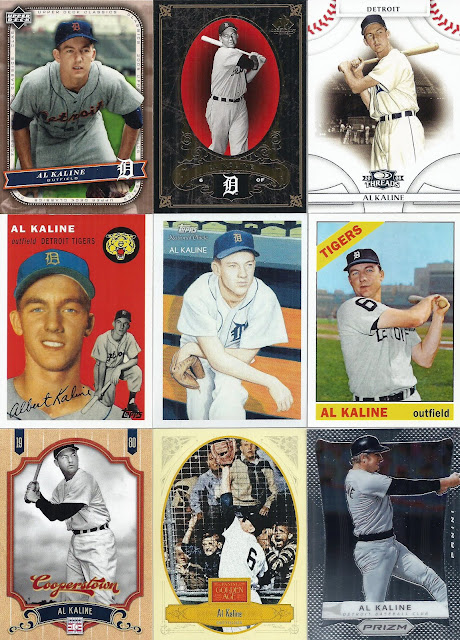 Card #1 here, 2005's Upper Deck Classics (not to be confused with the above All-Star Classics), kind of falls in that decent-but-unnecessary club from above, but at least Al's card #1!  I still have plenty of appreciation for SP Legendary Cuts, of course, including the 2007 version above.  A somewhat austere 2008 Donruss Threads base ends that decade, and then we're finally on to this one.  The middle is a Topps trio including 2010 flagship's Cards Your Mom Threw Out (the regular back), which is a reprint of Al's RC I wish I owned; a National Chicle base, also from 2010; and a second consecutive flagship reprint insert, 2011's 60 Years of Topps (reprint of his '66 base).  The bottom three are a bit more in my wheelhouse:  a 2012 Panini trio of Cooperstown, Golden Age, and Prizm. 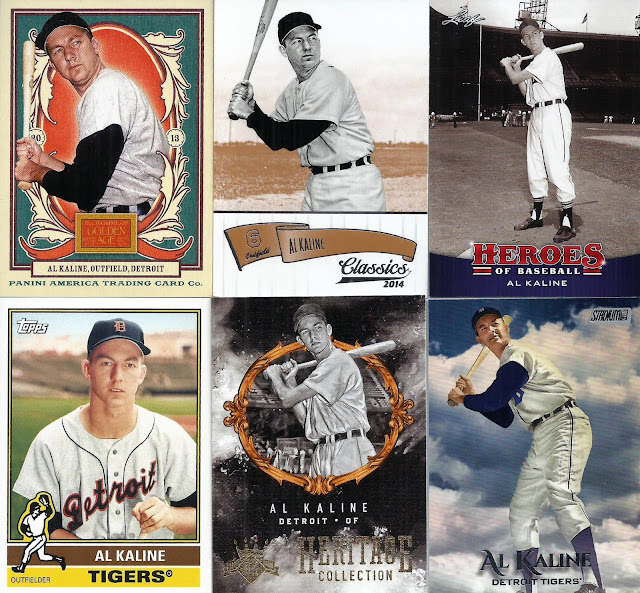 Here's where we end the run of vertical cards, starting with another Panini pair:  2013 Golden Age and 2014 Classics.  The former is too similar to Gypsy Queen for my tastes but the price was right to add it to a collection I've been wanting to grow.  Next is another card #1 in a set, Leaf's 2015 Heroes of Baseball, a product sold in blasters that guaranteed some pretty controversial Stan Musial autos.  The bottom gets us back to some classic products with 2015 Topps Archives, 2017 Diamond Kings' Heritage Collection insert, and finally, a towering Kaline adorning his 2019 Stadium Club appearance.  Once in a while it's fun to see old greats like Mr. Tiger in Stadium Club, though given how great the product was without them in the 90s I don't think it needs to be a yearly thing. 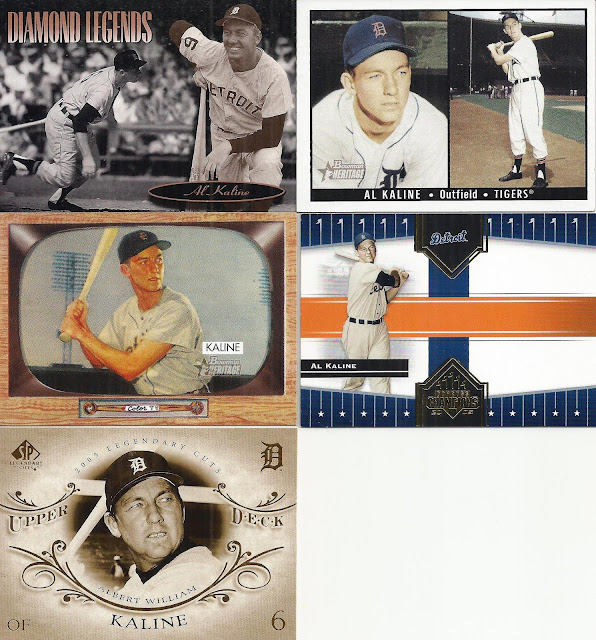 Let's end a post chock full of fun cardboard with five horizontal issues.  Up first is Al's second appearance from 1994 Upper Deck All-Time Heroes, a set we also covered when I posted some Mark Fidrych cards.  It looks terrific and I may see about chasing the rest of the Tigers that can be found.  Second is the dual image variation of Al from 2003 Bowman Heritage, the third and final piece of that puzzle.  Speaking of that product, how about the 2004 version, which reprinted Kaline's '55 Bowman card in all its vintage TV glory?  Heading back to modern looks there's 2005 Donruss Champions, a design that left a lot of room for relics and stickers.  And last up is one final SP Legendary Cuts appearance, this one also from 2005, on a design that wouldn't look out of place in Cooperstown.

This huge haul destroyed the century mark milestone for Kaline in my collection, jumping him all the way to 136 items.  That's a healthy total that I'm excited to build on, be it more affordable stuff from Sportlots or maybe some nicer pieces down the line.

I hope you all enjoyed this look at a ton of Kaline cardboard, not to mention this series as a whole.  These Sportlots purchases tend to take me a while to scan and post but I really like how productive they are for my collections, and maybe they give a few of you some ideas of what you might chase there.

With this series all done I temporarily find myself lacking any new in-hand purchases but I expect that to change very soon with a show this coming weekend and a bunch of quality COMC loot soon to be on its way, a lot of which could be heading to readers like you.  Happy December to all, and get ready for Christmas cards from TMV!
Posted by Dennis at 7:00 PM