As I sit here awaiting the results of the MLB Veterans Committee vote, which could right a few wrongs including Lou Whitaker still waiting to hear his name called, I figured it would be a good time to show off my latest show haul.

I headed out to Taylor as usual yesterday hoping to find a bit more content for some upcoming Christmas card packages (more on those soon!) and did pretty reasonably well for $50:


All most everything I got for myself came from the quarter boxes, though a few dollar cards ended up in my pile too.  Here's what I landed this time: 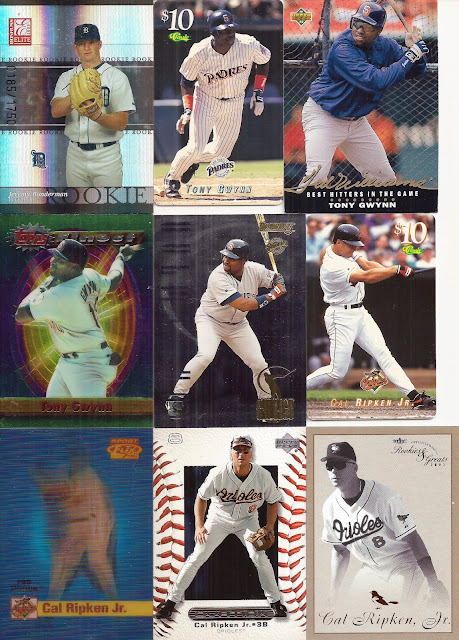 Baseball part one starts with a 2003 Elite base of former Tiger Jeremy Bonderman (#0185/1750) which I grabbed for his collection because I love the design.

Then we get to a quartet of Ripkens.  He also got in on the phone card action, plus he appears on base cards from 2000 Upper Deck Ovation (not sure how I didn't have that one) and 2003 Fleer Rookies & Greats.  But my favorite pickup of the day came from the $1 box:  a 1996 Sportflix ProMotion insert.  I remember busting lots of packs of the product around that year hoping for any of the cool inserts while enjoying the base set, and while I didn't have any luck back then, now I can pick them up at my convenience.

If that's not worth an animated .gif, I don't know what is!  I did laugh when I saw that Cal turns into a glove, though.

Gwynn and Ripken made one more appearance on a horizontal card each, but first I need to mention my lone Griffey score of the day, a '94 Upper Deck Electric Diamond parallel of one of his base cards in that excellent set.  While that parallel doesn't do much for me, I'm a fan of '94 UD and the leap in design it made over what in my opinion was a pretty meh look in '93, though I expect comments filled with opinions that state otherwise.  Anyway, UD did a great job with photography and holographic foil, and this was easily worth a quarter to me.

As for the other two guys, Gwynn stars on a '93 UD insert called "On Deck With" that includes a nice close-up photo and quick answers to some interview questions on the back.  Meanwhile, Cal's last cameo looks like a TV appearance thanks to the design of a '97 Collector's Choice Exchange card, the result of a winner being sent in.  That and the ones above get him up to 939 items and he maintains a commanding lead among my baseball PCs. 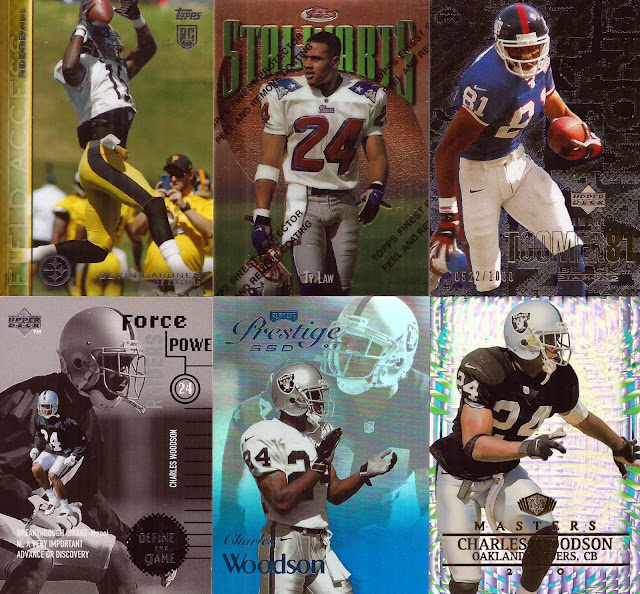 I was fortunate to track down six new Michigan Football cards while I was at it.  Former college QB/WR/QB again Devin Gardner is seen flying high on a Gold parallel of his 2015 Topps Field Access rookie (#42/99).  Topps knew CB Ty Law was one of the game's Finest way back in '97 when he was included in the set of the same name, and now 22 years later he's been rightfully elected to the football Hall.  And WR Amani Toomer is looking cool on a 2000 Black Diamond Gold parallel (#0522/1000) that makes me remember how much I liked the product back in the day.

And then I get to end on a fun trio of Charles Woodson cards.  First is a rookie-year insert from 1998 Upper Deck called Define the Game, one that was made not long after Woodson became the first primarily defensive player to win the Heisman.  Next is a 1999 Playoff Prestige SSD Spectrum Blue parallel (#002/500) that set me back a buck, well worth it for a variation of the best color, not to mention one that's numbered.  And last up is Chuck's base card from 2000 Collector's Edge Masters, one that's numbered as well (#1496/2000), albeit in digital fashion instead of foil.  These three give Woodson a total of 312 items, maintaining his lead among football players I collect, though Chad Henne is gaining ground.

That's it for this month but you'll probably get to see most of the rest of what I bought this time over the next few weeks when they arrive in mailboxes around the country.  Until then, LET'S GO LOU!
Posted by Dennis at 7:49 PM