I hope everyone had an excellent holiday season, I know I did. After taking a few days off, though, I decided I was ready to get started posting in 2021, and fortunately I happened to have some worthy content handy.

Although I'm still waiting on my original COMC order (which is pretty much all trade bait destined for Christmas packages), a package that's been in limbo since 12/14, the second one I had shipped days later made it to my mailbox before the year was up. All but one of the cards in this one were for me, so at least I've got that going for me!

I ended up doing quite well with the Black Friday/Cyber Monday sales so I have a nice fat stack of cards to show off. Because of that I'm going to break them down into (at least) three posts by sport. As you might have guessed by this post's title, hockey is first up: 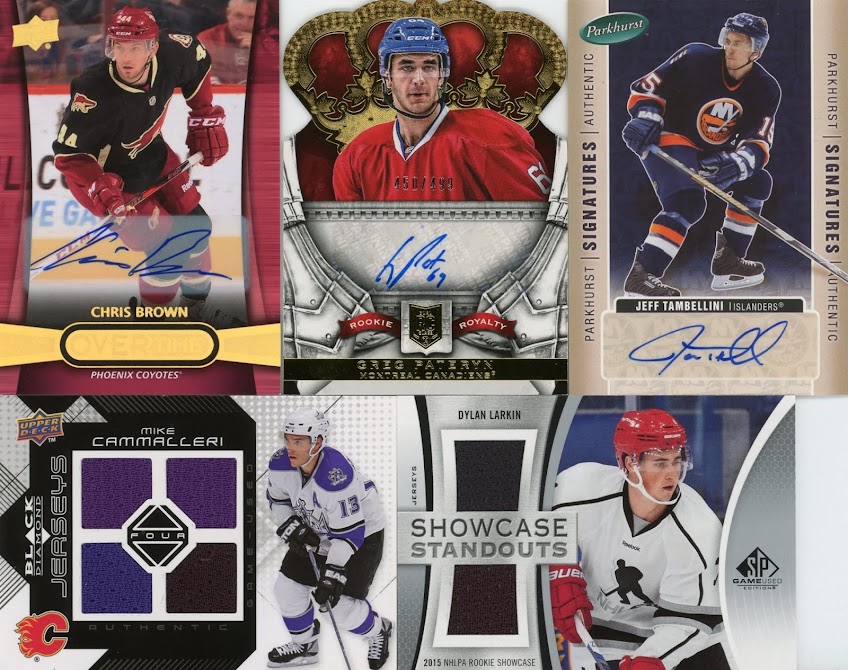 While this is in now way a huge haul, I'll remind everyone that I don't tend to search out hockey very much, and I largely went after these due to their ridiculously low prices. Here's a bit more about each:
Chris Brown 2013-14 Upper Deck Overtime Autographs auto: once again, ladies and gentlemen, it's the pride of Flower Mound, Texas! $0.90 was all it took to grab this Coyote colored (:chuckles Phoenixly:) signature of Brown, my ninth including an auto of 12 total hits (and 15 cards overall). It's a rare addition to his collection by me since much of what I own is courtesy of The Buckstore Kid, naturally. Fellow Wolverine Jacob Trouba can also be found here so this may not be the last of the set you'll see!
Greg Pateryn 2013-14 Crown Royale auto RC (#450/499): Pateryn is something of an unheralded D-man but he's managed to hang in the league on and off for approaching a decade, which is nice to see. He was originally drafted by the Leafs but made his debut and played his first few seasons with the pictured Canadiens here. Crown Royale's die-cuts just about always look nice, and the fact that this is also a numbered RC is a plus. At just $1.25 I was glad to make it his third hit (two autos and a plate) out of just five total cards.
Jeff Tambellini 2005-06 Parkhurst Signatures auto: the last auto of the group belongs to the son of former Oilers GM Steve. Jeff was a dynamite college player during my school days in Ann Arbor, though his NHL career was nothing special. But, man, could he take over a game and carry the team on his back when they needed it! I had no second thoughts about paying a buck for his signature on such a nice design, not that I was surprised that the classic Parkhurst name offered up a good look like this. Five of my eight Tambellini hits feature his John Hancock (out of just 14 cards overall).
Mike Cammalleri 2008-09 Black Diamond Jerseys Quad quad jersey: only one hockey Mike today so I'm not gonna use the tag, but I am quite happy with the new addition. Everyone knows relics have kind of lost their luster over the years, but it's not because of cool ones like this. The four swatches on my copy resulted in three different colors, which is definitely a win, as was nabbing the card for $1.25. TCDB tells me Cammalleri is #3 in my hockey collection (76 cards) and it's no wonder when I can add cool hits like this, my 18th of the former sniper.
Dylan Larkin 2019-20 SP Game Used Showcase Standouts Jerseys jersey: no, it's not a Wings card, but when you only have to pay $1.05 ("Freedom isn't free!") for a relic of a star like Larkin you go for it. And it looks like instead of being the now infamous "event-worn" crap that involves throwing on a jersey for five seconds to meet the definition, it was at least used in action at that event. Larkin's prices make many of his hits cost-prohibitive so this was a fun, cheap way to grab relic #5 (of seven hits) and card #40 overall. I'm glad the Wolverwing will be back in Motown for at least two more seasons after this one. 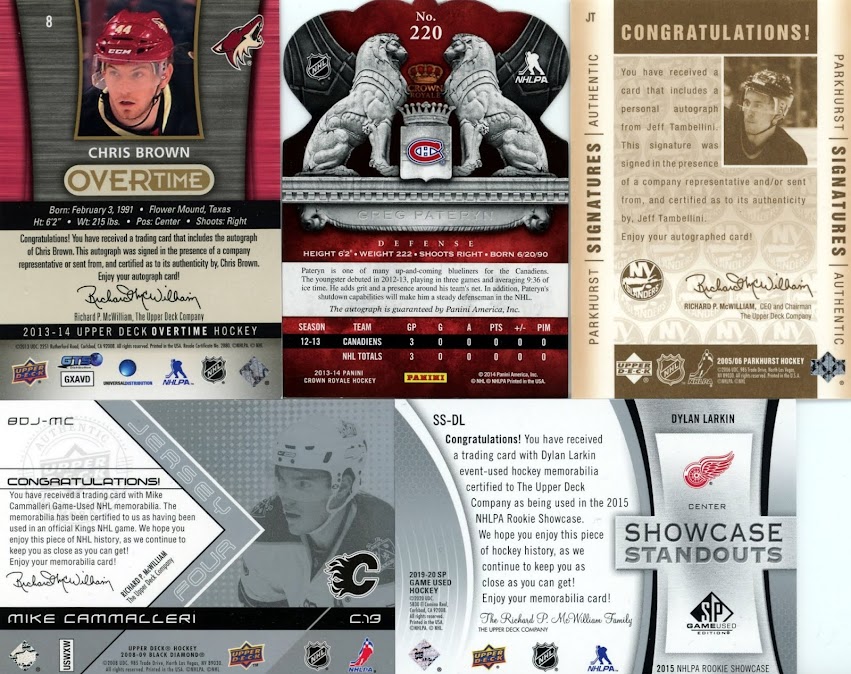 Since this was just five cards, plus I needed some back scans for TCDB, here's the backs of everything.
I would expect my next post to cover all my baseball purchases next, but we'll just have to see!
Posted by Dennis at 6:03 PM