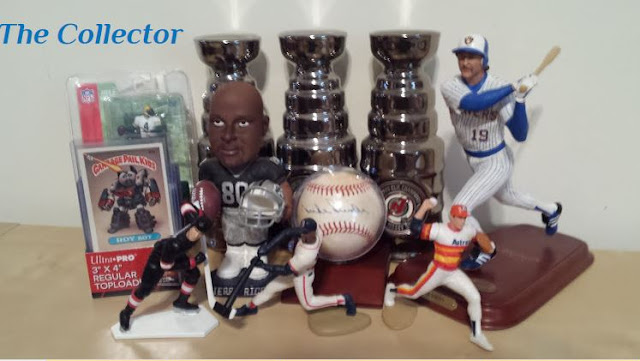 Something like seven out of my 18 Christmas card packages appear to have been delivered thus far, and this evening I'm happy to be posting a package of my own from one of those recipients, Chris of the Collector.

I've known Chris since before he dropped the "Pedestrian" in his blog's name and we've sent cards back and forth a few times.  Most recently he sent me a PWE full of Tigers toward the end of July, and today he's back with another one that skewed toward my preferred Wolverines collection.  Here's a look at what he sent: 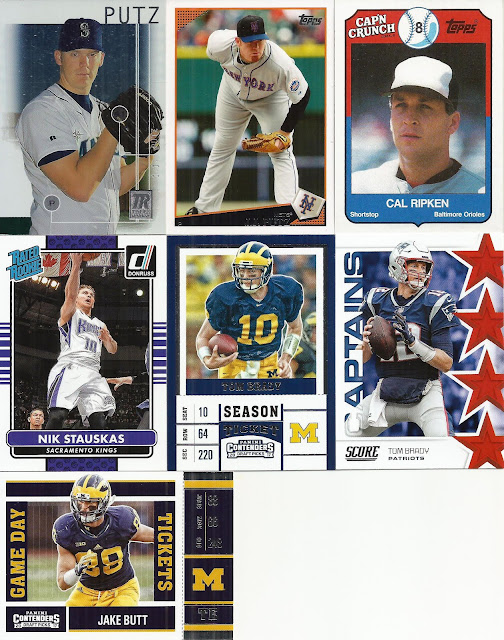 First up is a pair of J.J. Putz cards I wasn't positive I needed until I checked them against his collection.  I have over 200 cards of the former Michigan pitcher so it's always tough for me to find new ones, but apparently not for Chris, who knocked both the shiny 2002 Topps Reserve Parallel (#094/150) and 2009 Mets Topps team set cards off my list.  Nice!  And yes, the former is really referred to as "Parallel", but as goofy as that is, checking off a numbered parallel from his RC year is a big deal for me.

Sticking with baseball is a tasty oddball--at least, I'd assume it's tasty.  I don't think I ever really got into Cap'N Crunch and I'm more of a Cinnamon Toast Crunch fan when it comes to sugary cereal.  Either way, Cal's card from that brand's partnership with Topps is a nice addition to his collection, logos or not.

From the world of basketball, where Michigan lost a heartbreaker in OT to Oregon this afternoon, is Nik Stauskas, a.k.a. "Sauce Castillo", on his 2014-15 Donruss RC.  You purists can have your Topps Rookie Cup all you want but I'll take that Rated Rookie logo any day!  It's crazy to me that he already seems to be out of the league after playing for five teams over the same number of years, but maybe he'll be back.

Finally we'll head over to the gridiron, where bowl season is due to start next weekend.  Chris hit me with a pair of Tom Brady offerings:  a 2017 Panini Contenders Draft picks base as well as an insert from 2019 Score called "Captains" which seems pretty self-explanatory.  Of course I love seeing the shot of #10 with the Wolverines, and Michigan's upcoming date with Alabama is a good reminder of how Brady brought his team back against the Crimson Tide for a win in the 2000 Orange Bowl.

Joining the GOAT QB is another 2017 Contenders offering, this time a Game Day Tickets insert of rookie year TE Jake Butt, also rocking a college uniform.  Poor Jake can't seem to stay healthy since a bowl game injury that year, and I wish him a full recovery and real shot in the NFL.  For now at least I can smile and say that I have 17 Butts!

Chris, thanks once again for thinking of me with this nice PWE (and note, an underrated part of the package) that included exactly zero dupes and seven new cards I'm glad to have.  Here's hoping your Christmas cards get to you in a reasonable amount of time!
Posted by Dennis at 7:45 PM