The boys in Maize & Blue may be on a bye week but that doesn't mean I can't have my own Michigan Football Saturday.  Today I'm covering 62 new cards for my Rookie Blue project where I'm chasing every RC of each guy to suit up for Michigan (excluding autograph and relic cards).  Since this is a chase I started when I was still posting on Too Many Manninghams, the checklist I'm working from is currently here while the album containing what I've picked up so far can be found here.

And now on to the new stuff for today.  In the past I've generally shied away from buying these RCs on Sportlots because most of my spending leans toward the $0.18 site minimum price.  This time, though, I finally bit on some that were in the $0.45-$0.75 range, especially from one seller who had a bunch I needed, many of them numbered.  My overall spending has been down this year and this purchase was very productive so it was pretty easy for me to justify it, especially after surveying the damage to that checklist I mentioned above. 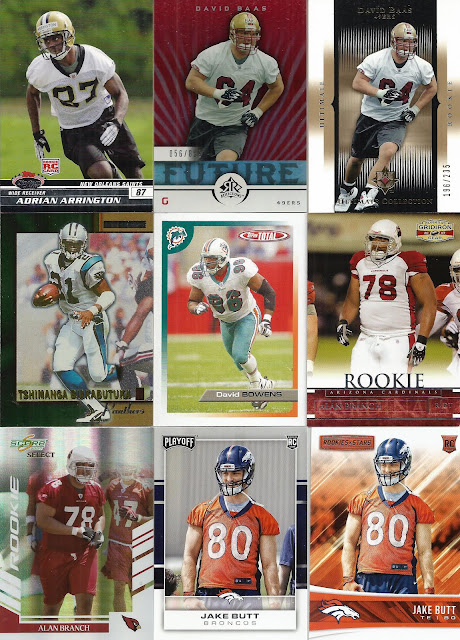 2008 draftee and PC guy Arrington's numbered '08 Stadium Club RC is my 17th of his 19.  Former OL Baas only has five to chase but they've been tough sledding, and the UD pair above gives me three.  Touchdown Tim gets his 30th of 32 thanks to '96 Score Board Lasers, a card I hadn't caught for my checklist until recently.  Michigan-to-W. Illinois LB transfer Bowens had just one card for me to chase:  that 2005 Topps Total.  Alan Branch (who kills QBs) gets numbered '07 Gridiron Gear Retail (ugh) and Select first-years to put me one short of his 26 RCs.  Finally, you can see two Butts (hehe) out of three in this post, in this case '17 Playoff and Rookies & Stars. 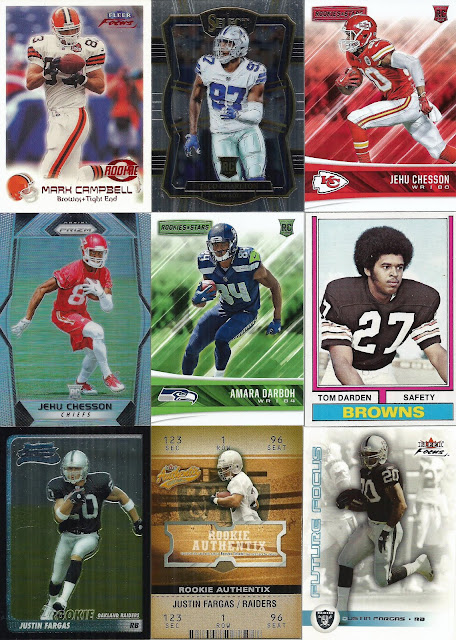 Campbell's '99 Fleer Focus was a huge add for me here because that numbered RC was impossible for me to find for under $1 until recently on Sportlots, and now I've tracked down all three of his cards.  Former Cowboy Charlton, who's doing pretty well when he, you know, actually gets playing time, gets within one card of halfway to his 20 after the '17 Select you see.  You'll also see Chesson again below, and for now Rookies & Stars and Prizm from 2017 are above, followed by fellow '17 guy Darboh's own R&S.  Darden's '74 Topps fixes an earlier misstep when I thought his '75 was the RC for some reason, and I'm glad to have that fixed, not to mention a new vintage add!  And then we have three out of a five-card run of transfer RB Fargas:  2003 Bowman Chrome plus Fleer Authentix and Focus (the latter of which are numbered).  Some of you might recall that that "Rookie Authentix" piece in the middle can be removed, another goofy Fleer innovation of the time. 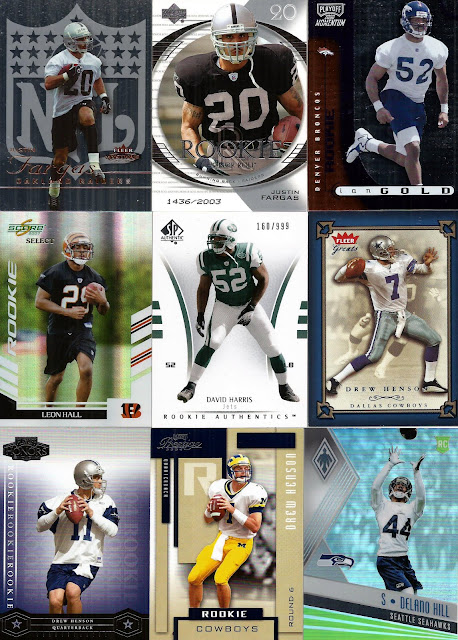 This scan begins with the other two Fargas RCs, Mystique and UD's Honor Roll, which are also numbered, and I'm now half way to his 22.  Gold is a guy from 2000 so his stuff can get a bit of a Brady bump, but the Playoff Momentum above, my 7th of his 9, wasn't bad.  Fellow '07 draftees and PC guys Hall and Harris appear on numbered cards from Select and SP Authentic, and while I need three more of Hall's 23, the Harris is the 24th and final RC of the former tackling machine, sewing up another player.  Here-and-gone dual-sport guy Henson gets a nice trio highlighted by '04 Fleer Greats along with Playoff Honors and the college-themed Prestige for 18 of his 37.  And lesser known 2017 DB Delano Hill marks the first of three appearances of Panini Phoenix with one of his two rookie issues. 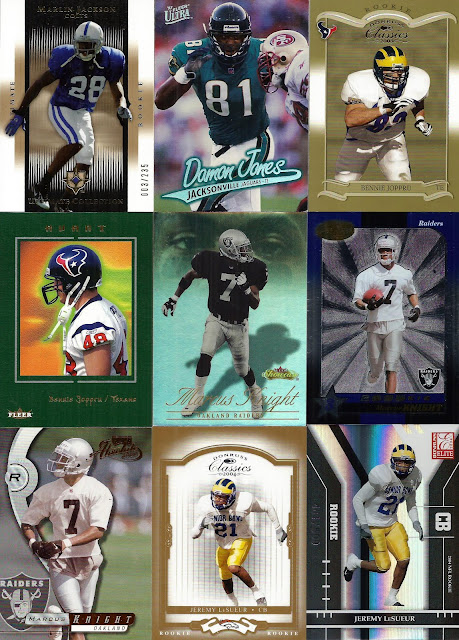 PC guy Marlin Jackson's 25th of 30 first-years is from '05 Ultimate Collection like Baas's above, and we'll see that product (different year) in a couple more scans.  '97 Ultra (and its great design!) was the last of three I needed for transfer TE Damon Jones.  Speaking of that position, I landed a couple more for Bennie Joppru:  the gorgeous '04 Donruss Classics plus Fleer's Avant, both numbered, which get me to 25/32.  I'm short just one of WR Marcus Knight's 15 rookies thanks to this 2000 trio of Fleer Showcase and Leaf Certified (both numbered) plus Playoff's Absolute (surprisingly not numbered!).  And I was thrilled to knock off a beautiful pair of numbered college uni RCs starring '04 DB Jeremy LeSueur--Classics and Elite, which leave me three short of his nine. 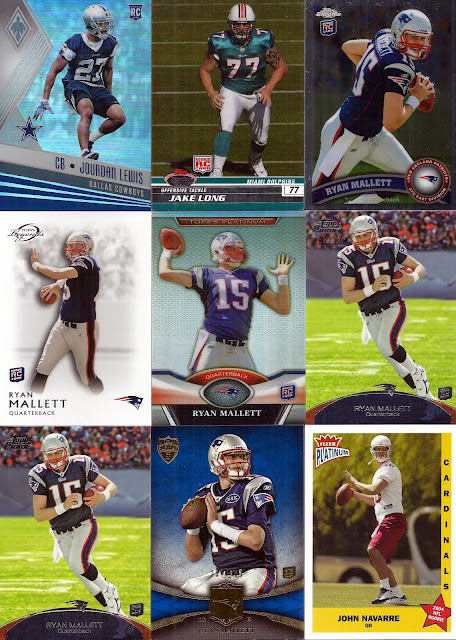 CB Jourdan Lewis is 2017 Panini Phoenix guy #2, which is also RC #2 in his collection.  Former #1 overall pick Long joins Arrington from '08 Stadium Club for his 19th of 22 rookies.  Transfer QB Mallett gets a big boost with six cards, all from 2011 Topps brands, to get him up to 8/10.  And we get the first of a pair starring another QB, John Navarre.  This one's from 2004 Fleer Platinum, and I was surprised that it was a numbered card given the brand's history. 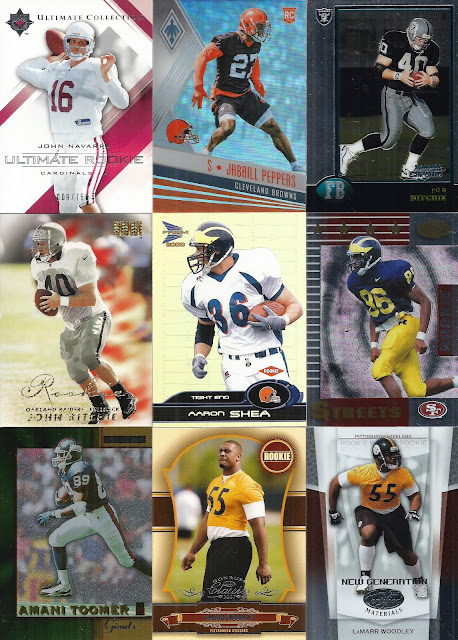 Navarre's other issue is from the previously mentioned Ultimate Collection, and his pair puts him at 13/25, as his stuff continues to be a thorn in my side.  Do-everything dude Jabrill Peppers is '17 Phoenix player #3, and the 8th of his 21 RCs is from a product that's grown on me a bit.  Next you can see two of the three Jon Ritchies I found, representing another backfield guy that transferred from Michigan and ended up with the Raiders.  These are from '98 Bowman Chrome and Skybox Premium.  Aaron Shea is yet another 2000 draftee and here you see him on a shiny and numbered Pacific Prism Prospects card (his 11th of 15) which is a good reminder that the Brady from this set and others will be super expensive.  I happily checked off another player by adding RC #9 of 1999 WR Tai Streets from Leaf Certified.  Toomer joined Biakabutuka above from the '96 Score Board Lasers set and I now need just two of his 23.  And finally this scan includes a numbered pair of LB standout LaMarr Woodley--2007 Donruss Classics and Leaf Certified Materials--that go nicely with a third card below. 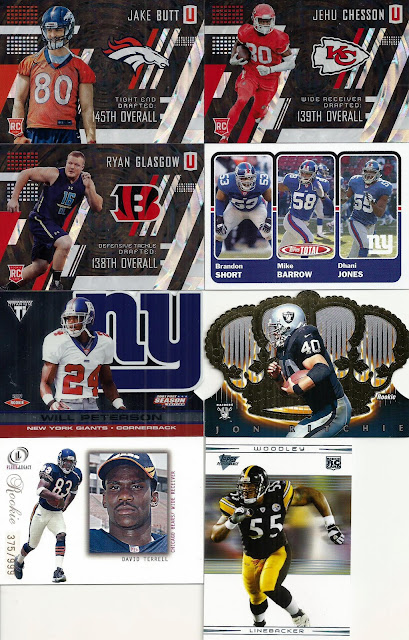 This mostly horizontal scan starts with a trio from the love-it-or-hate-it 2017 Panini Unparalleled set, including the previously seen Butt (7/14) and Chesson (8/13) plus the lone RC of DT Ryan Glasgow, part of the amazing walk-on family at the school.  The well-traveled Dhani Jones has two RCs and you can see one above, which he shares with a couple other Giants in 2003 Topps Total.  Another Giant follows as transfer CB Will Peterson (#2 of 4) appears on his numbered 2001 Titanium Post Season that uses a kick-ass die-cut design.  Ritchie's third card is also a die-cut from '98 Crown Royale, and gets me to 7 of his 12.  WR David Terrell looks a bit lonely without fellow Bears draftee Anthony Thomas on a 2001 Fleer Legacy RC that puts him at 27/53 rookies and 149 cards overall, one short of his RB counterpart.  And lastly, we have one more vertical card that didn't fit in a group of nine:  Woodley's numbered 2007 Topps Performance base, which puts him at 20/26.

This post plus some fun results on the field today definitely made this a fun college football Saturday for me.  And for those of you who prefer the diamond, I'm now done posting football pickups and should have something like five baseball posts to close out this series.  Thanks for reading and GO BLUE!
Posted by Dennis at 8:14 PM