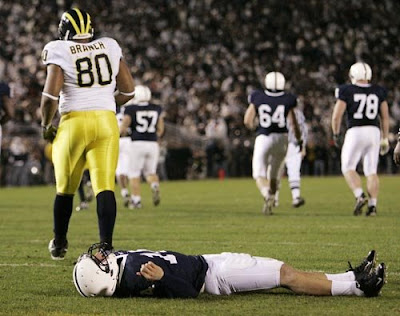 It's another exciting college football Saturday that's seen a few surprising upsets, including Illinois taking down a top-10 Wisconsin team that must have been looking ahead to next week and Ohio State.  Hopefully the Wolverines (#16, 5-1) have some of that upset magic of their own as they head to Happy Valley to take on undefeated Penn State (#7) for the conference's marquee game under the lights this evening.

The Nittany Lions' spotless record is a bit questionable, though, with close losses against Pitt and Iowa where they mustered just 17 points in each game.  Still, this relatively nascent series, which began in '93, has favored the home team of late, 8-2 over the last 10.  Game #23 in the series will be the eighth time that PSU has rolled into this matchup undefeated, with a 3-4 record so far that includes a huge win for Michigan in '97 that helped vault them to the title, plus 2005 when this happened:

I love me some 2005 Mario Manningham!  This was Penn State's only loss that season, and at the hands of a Wolverines squad that went just 7-5.

Still, this is a team that's looking tough, and the point spread, at around a touchdown-plus, seems to agree.  Michigan will need some heroic plays by the defense, like Mr. Branch, killer of QBs, seen at the very top of this post in the 2006 game.  And more importantly, the offense will need to get it going against its toughest opponent this far.  Fortunately they showed some signs of life last weekend:

Granted a few ill-timed fumbles plus some uncharacteristic flubs by the D led to a gutsy comeback by Illinois that make things too close for comfort.  Then again, the Illini showed that same heart again today in taking down Wisconsin, so you have to take that into account.

Will Michigan be healthy enough and play mistake-free to the point of a big upset that should change the annoying "Jim Harbaugh is on the hot seat" narrative the media is relentlessly pushing?  I don't know, but I'm at least hoping this team comes out hyped up to play some tough competition and shows the kind of effort that could win the game.  Sometimes all it takes is one second to obliterate another team's hopes!